Respawn Entertainment keep revealing more and more information regarding Season 7, Ascension. One of the latest information dumps from the developers help to expand more on what the new Club feature means for Apex Legends players.

Clubs are a brand-new feature that aims to bring the community much closer together. The new social feature allows players to connect through in-game social communities made by players.

The Club feature aims to work similarly to how guilds work in MMOs, where people can interact on a much closer level than people use a Friends List for. This is a place for a group of players to chat, play together and organize social events.

At the start of Season 7, the game menu will get a new header called Clubs. The tab gives players two options, one to create a Club, with the other option to find Clubs.

Players have quite a bit of creative freedom when it comes to creating Clubs. The feature provides the liberty to name a Club whatever they want within reason, along with the Club Tag, similar to Clan Tags from other titles, a Logo, privacy settings that detail the size of the Club, whether it is public or private and more.

The other option is to set tags that allow players to search for descriptions that best describe the community the Club aims for. These tags can be competitive, casual, social, etc.

Clubs work perfectly with the new Crossplay system that is releasing with Season 7. Players have the choice to enable their Club for people across all platforms. However, if you want the Club to remain platform-specific, then the Club can have crossplay turned off.

There is also a restriction to Clubs. When a player creates a Club, that Club is restricted to the data center it was created on. This means that North American Players will be unable to join European Clubs and so on, so forth.

Joining and participating in Clubs 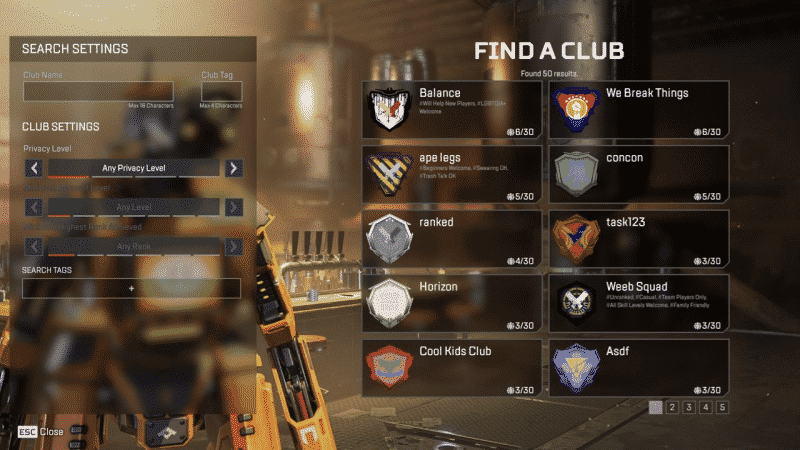 Players can find a Club that suites what they want to join. Once when they find a suitable Club, they can join it if it is open to all, or submit a request if there is a vetting process to get in. When a player gets in the desired Club, they can participate in Club events and communicate with like-minded players.

The Club has a handy member list that a player can invite specific members of a Club from. Alternatively, there is an invite everyone to the lobby button. This is how players from Club get into a Lobby without being friends with them.

The other big feature of being in a Club is the Timeline button. It is a calendar feature that details recently concluded events and upcoming events for players to get involved with. Other important details such as players joining or a Club lobby that places top-five in a match are shared here.

Players can also get a notification when the Club manager sends an announcement. Announcements are an excellent way of knowing when events are coming up, or if Admins and the Club Owner need to communicate important information.

Since Clubs are community-focused, what better way to encourage interaction through rewards and responsibilities. Players that actively play in a Club can get badges. While there are no specifics on the Badges, they seem to be awarded when players participate in Club lobbies.

The other big feature of Clubs is the internal ranking system. There are four ranks to every Club, which are Grunt, Captain, Admin and Owner.  Grunts are the entry rank that everyone starts at. Grunts have basic permissions like inviting and joining Club lobbies and accessing the Club Members list. The Captain is the next rank in the Club hierarchy, capable of inviting players to the Club.

Admins are the trusted members of the Club responsible for internal disputes and community cohesion. They have the power to kick Captains and Grunts, promote Grunts, post announcements, and view complaints filed through a Club Complaint feature. Players that want to become Admins need to get appointed by the Club Owner.

Club Owners are the founders of the Club. They can do everything that Admins can do and promote Captains to Admins.

Clubs release on November 4, alongside other Season 7 features.