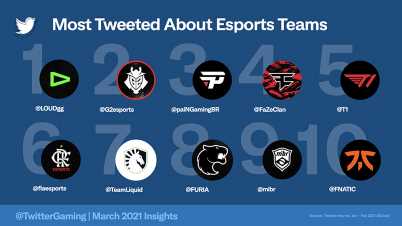 According to Twitter’s Head of Gaming Content Partnerships, Rishi Chadha, Brazilian organizations are responsible for five of the top-10 positions of the most tweeted esports teams in the world in the first two months of 2021. The top spot belongs to LOUD, pushed by its entrance to the Brazilian League of Legends Championship (CBLOL). Before 2021, LOUD only held Free Fire and Fortnite competitive rosters.

Even if they’re not Brazilian, both FaZe Clan and Team Liquid also hold operations in Brazil. Team Liquid even fields a Free Fire roster in the country that won the Continental Series in 2020.

The CBLOL was also a highlight in Chadha’s insights as its season start was responsible for the highest spike of conversations on Twitter. Besides Brazil, Uruguay, the U.S., Portugal, and South Africa are the countries which tweet the most about the competition.