G4’s headquarters, which is located in Burbank, California, is expected to play a leading role in the network’s return to television in November 2021. The 67,000-square-foot facility will feature workplace environments and broadcast production facilities, as well as esports training and gaming spaces. 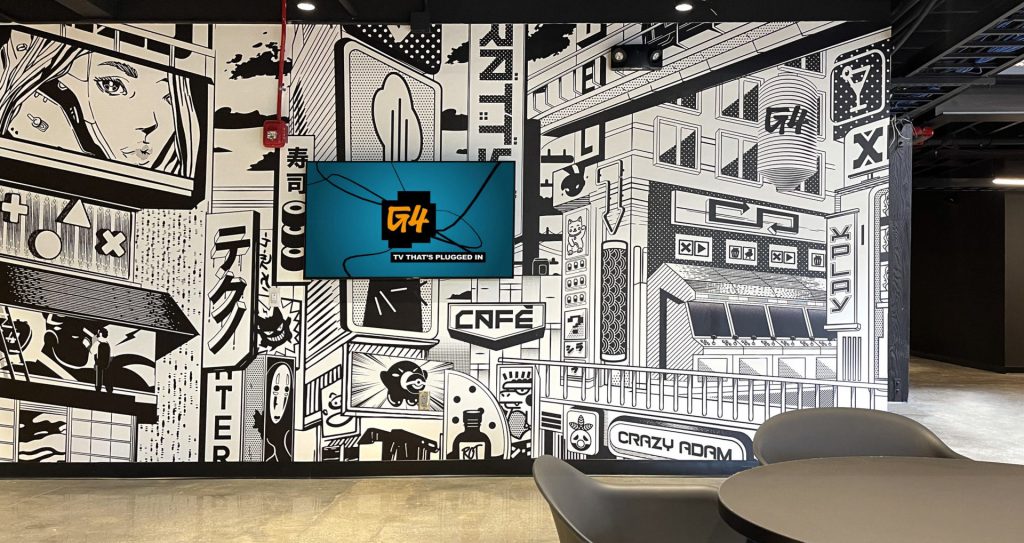 The facility, which once house studios by media entities TMZ and Inside Edition studios, was built by Shawmut Design and Construction. Populous, the company behind the facility’s design, cited that the new studio looks to ’embrace the G4 brand’ through its look.

As such the studio has been detailed with custom art designs, some of which will be available as NFT’s for fans to collect.

Joe Marsh, Strategic Advisor at G4, added: “The G4 culture is all about gaming, pop, and fandom culture and the team at Populous translated its forward-thinking design concepts to reimagine these studios as a stand-out facility at the intersection of real estate, broadcast media, and gaming. The environment helps us bring the G4 universe to life and invite it into people’s own homes in a new way.”

According to the release, the new studios will also look to provide a stage for the ‘next generation of content consumption’. Moreover, the facility has the ability to host professional esports training and events as the studio features a 100-seat grandstand.

Comcast Spectacor is known as the owner of the Wells Fargo Center, as well as numerous sports teams in the United States. Last year, the company announced that it would be relaunching G4 following a six-year hiatus. Within esports, Comcast owns Overwatch League franchise Philadelphia Fusion.

Some of Populous’s well known architectural designs include the Olympic Stadium for the 2012 Olympic Games in London, as well as the Tottenham Hotspur stadium. The company is also behind the design of a number of esports venues such as Esports Stadium Arlington, Fortress Melbourne, and Fusion Arena.

Esports Insider says: The relaunch of G4 is approaching fast, and the news of the new facility really does show that Comcast Spectacor means business. Little is known about the type of programming we can expect, however, the production values will undoubtedly be boosted through this new studio.