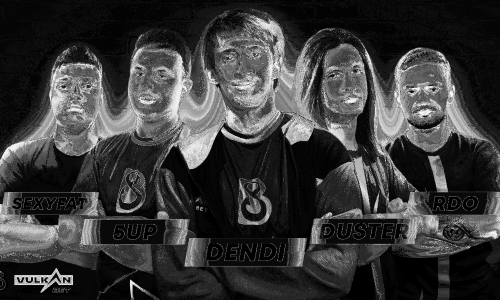 B8 will move on into the 2021 Dota Pro Circuit with just two members of the old roster. Besides the organization founder, Danil “Dendi” Ishutin, the other remaining player on the roster is the German support Enis “5up” Elfki.

The big surprise doesn’t come from the fact that B8 released three of their players through the last couple of weeks, but rather from the  interesting choice of spicing things up with the addition of three Brazilian players, along with their coach from the previous team they played for. In a completely unexpected turn of events, Dendi will be joined at B8 by Heitor “Duster” Pereira, Leonardo “RdO” Fernandes and Diego “Sexyfat” Barini Santamaria, all coming from Midas Club.

The three Brazilian players also come with Filipe Astini, a prominent figure of the South American scene, who is also the Midas Club CEO and former coach for the three during their time under the Furia banner. Astini will be working at B8 side by side with Daniil “MeTTpuM” Gilev, who will be also joining the team in a coach capacity.

B8 current roster from position 1 to 5:

It is not mentioned in the B8 official announcement if the team will continue to play in the CIS region or if Dendi and 5up will be moving to Brazil and start the 2021 DPC via south America regional league. Most likely, all questions will be answered in the following days, when the qualifier games for the first season of regional leagues will kick off.