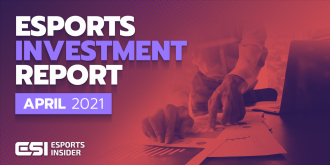 Every month, Esports Insider compiles a list of the month’s key investment stories. To read more about a story below, click the link in the corresponding title.

According to the release, participants in the funding round included Swedish financial group Svea Ekonomi and Norwegian Carucel Finance.

Esports data platform GRID announced a $10m (~£7.28m) Series A funding round, with NFL player JuJu Smith-Schuster among the investors.

Alongside Smith-Schuster, ‘industry leaders’ behind Alinea Capital, Bumble Ventures, and Tar Heel Capital Pathfinder took part in the firm’s funding round, as well as ‘leading investors in the gaming, iGaming and tech industry’.

OverActive Media, the parent company of MAD Lions, Toronto Ultra and Toronto Defiant, announced a second close to its private placement, with the firm receiving a total of over $40m (~£29.11m) in funding.

As a result of the investment, NHL’s Montreal Canadiens has joined OverActive Media’s ownership group. Moreover, Arizona Coyotes’s Phil Kessel and Washington Capitals’s Carl Hagelin have also become the latest in the company’s ownership group who are professional athletes.

North American esports organisation and competitive platform Generation Esports in April announced its Series A funding round with a total of $10.8m (∼£7.83m) secured.

The funding raised will be used to support the organisation’s community and student esports initiatives.

The strategic investments were made during the company’s Pre-Series A funding round. The amount raised during the round has not been revealed.

According to the release, the renewal, which is set to commence in 2022, will see both entities invest over $100m (~£71.95m) in esports up until, and including, IEM Katowice 2025. The investment is expected to bring ‘further product innovations and improvements for fans and players alike’.

Semper Fortis Esports PLC, an esports startup, announced its intention to go public via the Aquis Exchange on April 26th. The company aims to raise £2.5 million, according to a release, to tap into the ‘fast-growing’ market for competitive gaming.

Board members include Keith Harris, who is the former chair of The Football League, and Atari founder Nolan Bushnell.

Astralis Group announces intention to trade in US market

Danish esports organisation Astralis Group announced its intention to trade in the US market through a dual quotation on the OTCQX Best Market.

According to the release, the organisation has applied to be publicly listed in the country due to ‘growing US investor interest’ in Astralis Group.