According to the release, the collaboration will involve EVOS VIP players and brand ambassadors, as well as artists from Universal Music Malaysia. 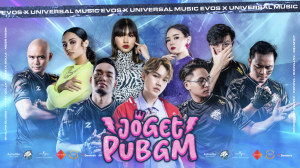 OMEN by HP, Chek Hup, Domino’s and Matchroom have all been confirmed as partners for the event, which will be live-streamed on August 13th.

Some of the talents involved in the event include Muhammad ‘Yakuza’ Afiq and Muhammad ‘xSamZ’ Abdul Samad, plus Universal Music’s DOLLA Syasya, Shalma, and Meer Nash.

Fans who watch the live stream will also have the opportunity to play with the talents involved. EVOS has stated that custom rules will be implemented during these matches.

He said: “We started to connect with Universal Music Group earlier this year, we shared our plans and they were on board straight away. It took us a couple of months to finalise the details and everything got pushed back a bit due to the pandemic.

“However, they were extremely supportive and kept the discussions on despite all the delays. Thankfully after a little bit more back and forth, we were able to finalise the collaboration with them and start our calendar.”

The music industry and esports sector have become even more intertwined over the last 12 months, with a variety of music labels securing partnerships with esports entities.

This year alone Warner Music’s brands have secured deals with MAD Lions, ESPL, and the LCO. Moreover, ReKTGlobal has recently announced a collaboration with the Breakaway Music Festival. According to Chan, this trend is likely to continue.

“Music and esports always had a lot of similarities,” he explained. “The same audience, the same interest. This is not the first time it has happened and we are sure it won’t be the last time as well. We hope to bring this collaboration further above and beyond.”

Esports Insider says: It’s very interesting to see how music is being integrated into the esports sector. EVOS and Universal Music Malaysia’s collaboration is another example of how the two sectors can intertwine. The deal should raise the popularity of all the players/artists taking part. Moreover, securing a range of commercial partners for the event should benefit both entities as well.