Finland for the first time walked away from Nation Wars 2019 trophy in hand. In what was another impressive display of professional esports, Serral managed to lead himself and his Finnish teammates to victory over South Korea.

Nationwars finally came to an end after 4 months of Starcraft. Twenty-four nations from around the world came together to compete for a prize-pool of $40,000. On Sunday, the final four countries of Italy, France, Finland and South Korea duked it out to see which country was the best at StarCraft. This yet another victory for Serral who recently won the Homestory Cup XX back in November.

Italy vs. Finland saw one final rematch between Serral and Reynor to round out 2019. The two had previously gone head-to-head at the Homestory XX championship. There, Serral managed to just barely eke out a victory over Reynor and took home the cup. Before that, Reynor had managed to beat Serral in the Blizzard World Championship Series semi-finals.

In the Nation Wars semi-finals, Serral managed to score two wins against Reynor. The first head-to-head match-up between the two was a slug-fest of Roaches and Lurkers. The biggest blow of this match came when Serral managed to knock-out Reynor’s Hive and put Reynor at a huge disadvantage. Reynor eventually tapped out and handed Serral the win. 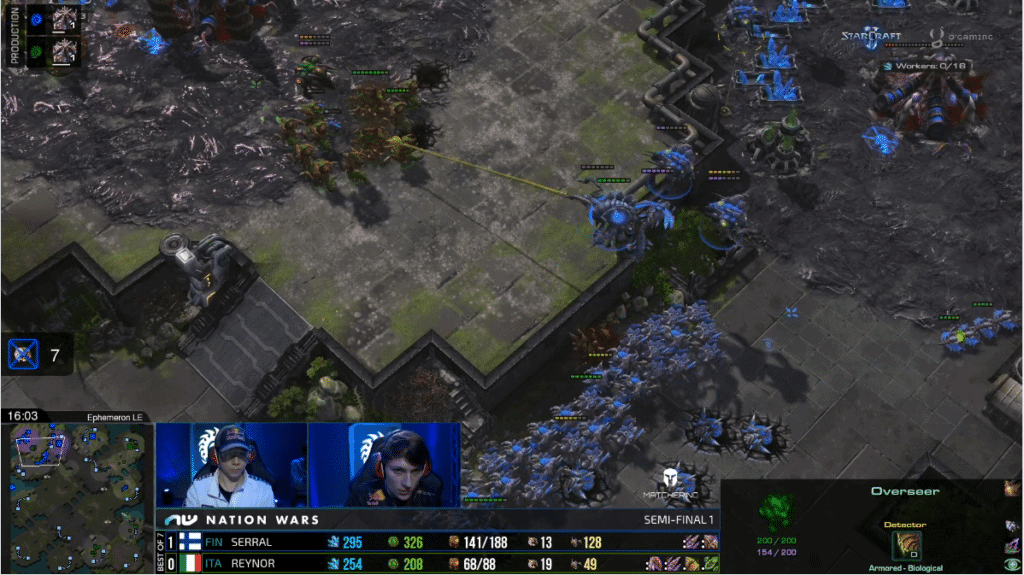 The only win for Italy came from Ryu, who managed to stealth ZhuGeLiang with a Nydus Tunnel right to the back of his base and scored an easy victory. 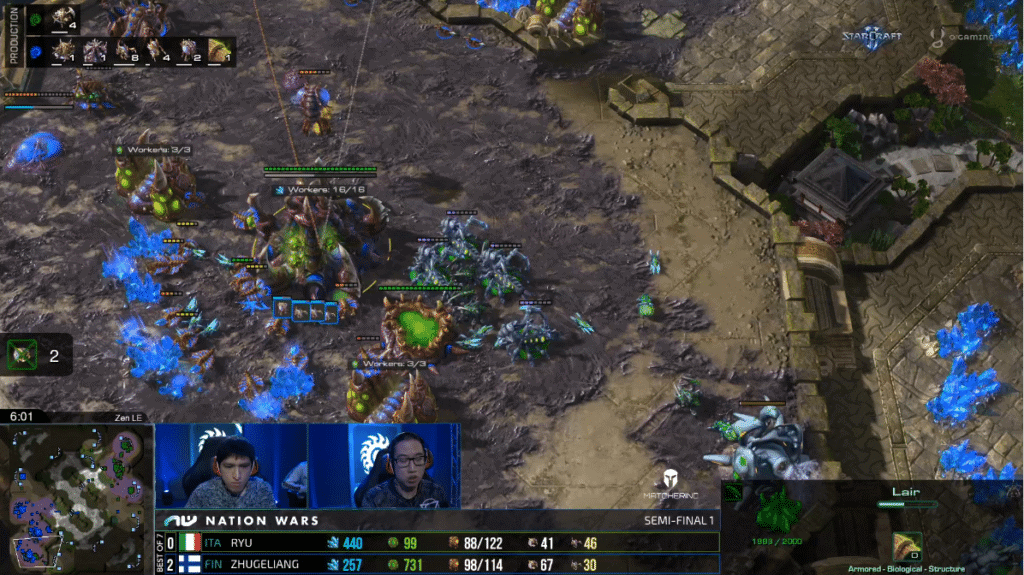 Serral went on to quickly beat Ryu in the next round, placing the score at 3-1. The final round was another rematch between Reynor and Serral. Serral quickly brought down Reynor and secured Finland’s place in the finals, 4-1.

Team France started out with quite a rocky start. South Korea managed to win three matches in a row. The first match of PtitDrogo vs. INnoVation started out decently enough, with PtitDrogo managing to bring out Colossuses. INnoVation would counter with a mixture of Vikings, Marines and Marauders backed up by Medivacs. This combination scored INnoVation the win.

Round 2 and 3 would also go to South Korea. Clem would lose to Stats during a match where Clem’s computer would briefly crash. In the next round, soO went on to beat MarineLorD and put South Korea in a comfortable 3-0 lead.

PtitDrogo managed to score a match against soO with the help of a Warp Prism and Archons. After that, he would go on to save France, beat soO and bring the score to 3-1. 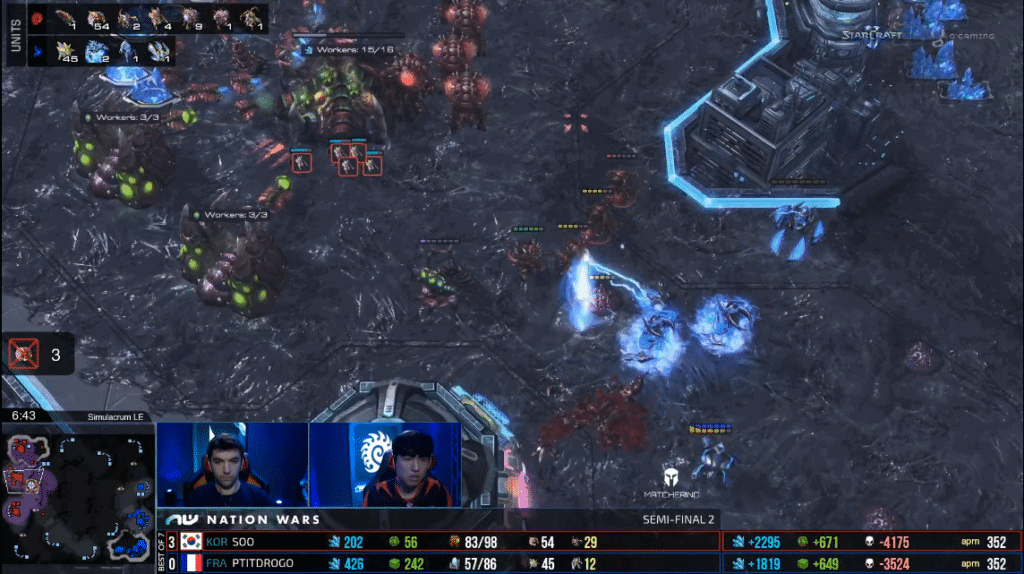 Next, PtitDrogo went on to play Stats in the proceeding round. PtitDrogo would come close to being able to match Stats, but Stats would ultimately get the upper hand thanks to his use of Colossuses. South Korea would beat France 4-1.

France took the first match, thanks to Clem. Clem excellently harassed Ryosis with Hellions, winning him the match. In the next round, Reynor scored some revenge by beating PtitDrogo thanks to the use of some Swarm Hosts. 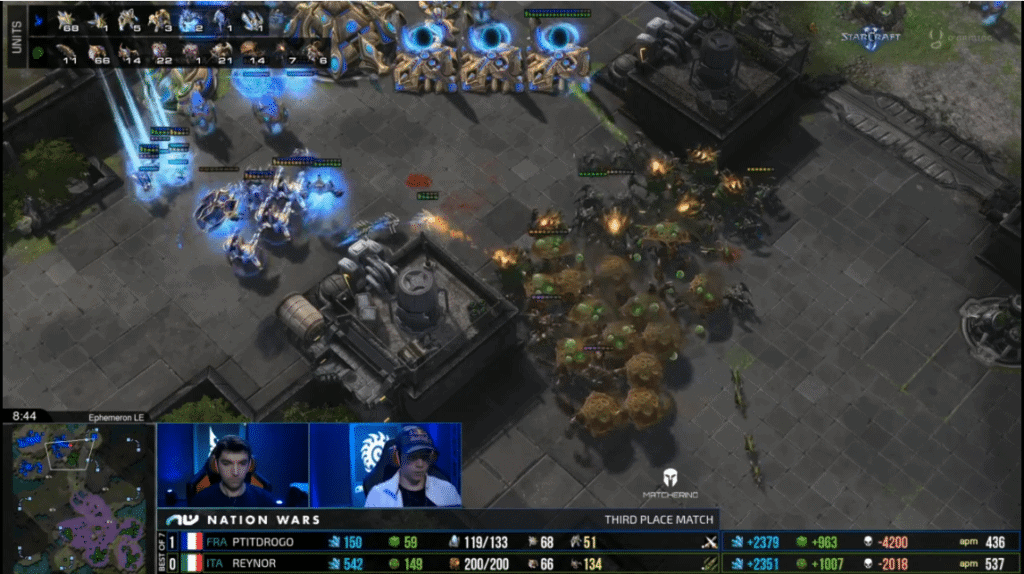 With the score tied 1-1, Ryu went up against MarineLorD. MarineLorD started out excellent with a great use of Battlecruiser harassment in conjunction with well timed tactical jumps. Ryu managed to keep the match extremely close, but the overall mech strategy of MarineLorD prevailed over Ryu in the end. 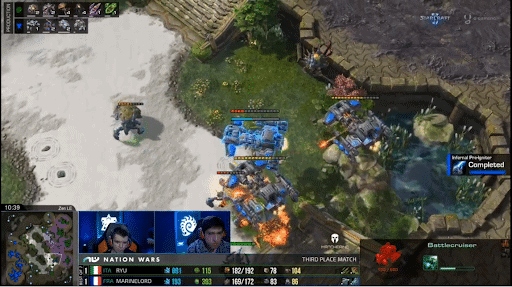 MarineLorD made similar use of Battlecruisers against Reynor, but Reynor used a nice strategy of Swarm Hosts against MarineLorD’s base by hitting his vital infrastructure from behind. Reynor knocked-down MarineLorD and tied the score 2-2.

Reynor didn’t have long to rest unfortunately. In the next round, Clem managed an excellent micro of Marines and Medivacs against Reynor to score another win for France. In game 6, Reynor went up against Clem again and scored a win for Italy using a nice mixture of Zerg units. 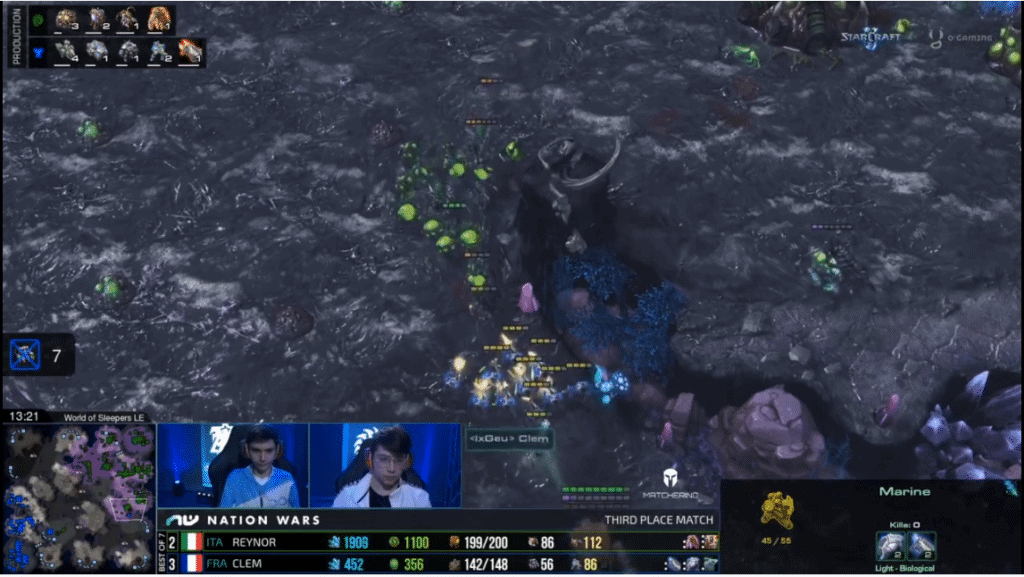 The tie-breaking battle featured Clem roasting Reynor’s zerg with some Hellbats early in the match. This move hampered Reynor’s economy. Reynor climbed back up and miraculously hung on despite heavy harassment from Clem. In a huge game winning play, Reynor smashed Clems army with the help of Locusts. 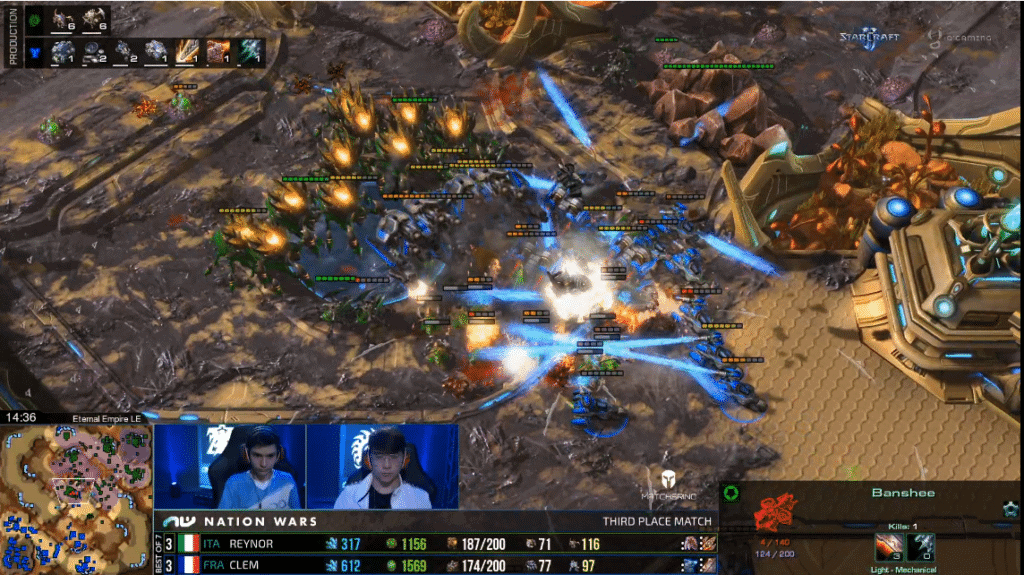 Turning the tide of the battle, Reynor went on the offensive and pushed Clem back completely. Against all odds, Reynor secured the third place title for Italy.

Now the stage was set for South Korea and Finland to battle for the title in a best-of-nine series. The first round saw Serral go up against INnoVation. Despite INnoVation going in heavy on mech, Serral managed to beat back INnoVation’s Siege Tanks and Hellions with a bulky army of Ravagers and Roaches. 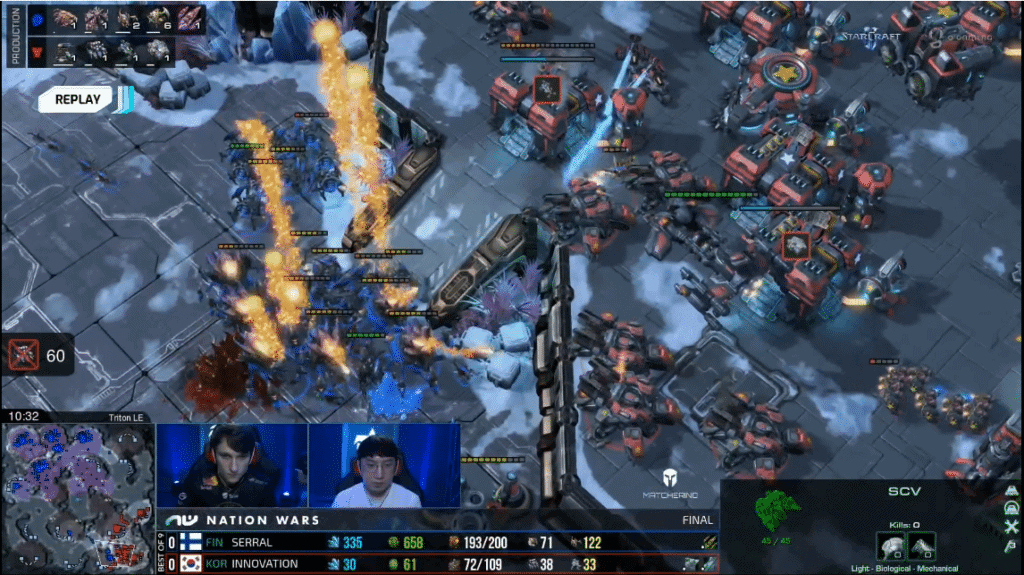 TheMusZero went straight for a cannon rush against Stats. This ended up backfiring completely, as Stats quickly shut down TheMusZero’s cannons and placed TheMusZero behind economically. Following that, Stats quickly rolled over TheMusZero’s base and secured South Korea the point.

In the third round, ZhuGeLiang was able to take down soO and put Finland back in the lead. ZhuGeLiang out produced soO in terms of Roaches and Ravagers. With similar armies, ZhuGeLiang’s numerically superior numbers ultimately won him the match.

Stats then managed to beat both Serral and ZhuGeLiang with a great use of Adepts against ZhuGeLiang early on in game 5.

After losing twice in a row, the Finnish team opted to bring back Serral to have another go at Stats. This time Serral managed to score some sweet Banling hits against Stats’ Probes. 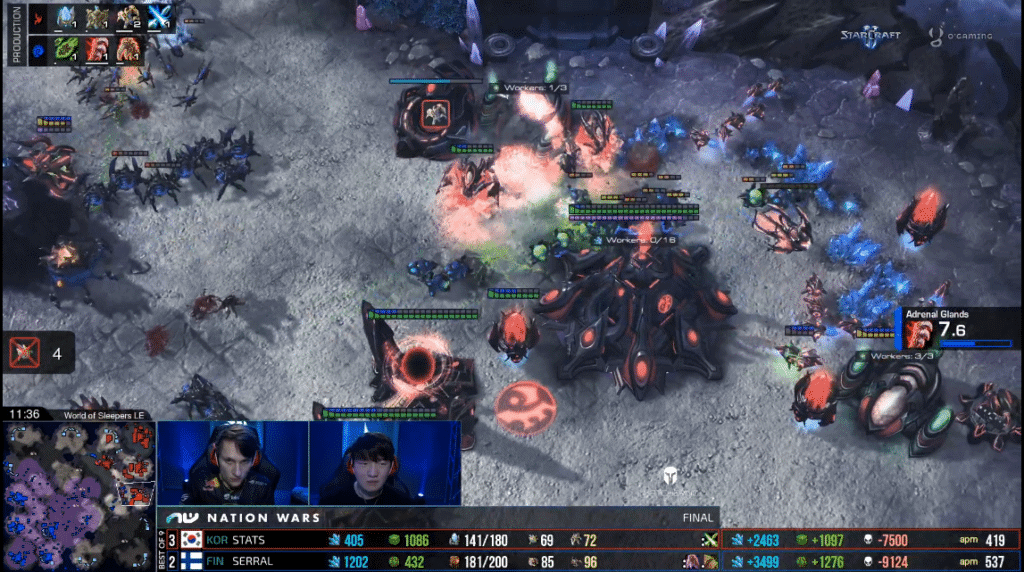 With this, Serral tied the game back up at 3-3.

South Korea decided to bring back INnoVation to take on Serral in Round 7. Serral managed to dominate INnoVation’s mech army with some beautiful hooks by Vipers and Infestors. 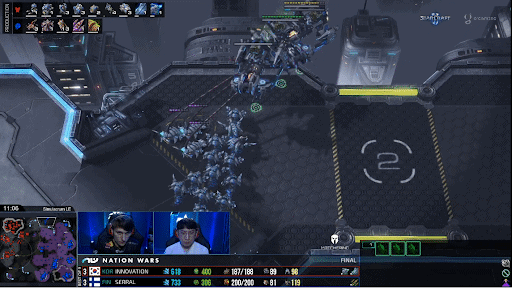 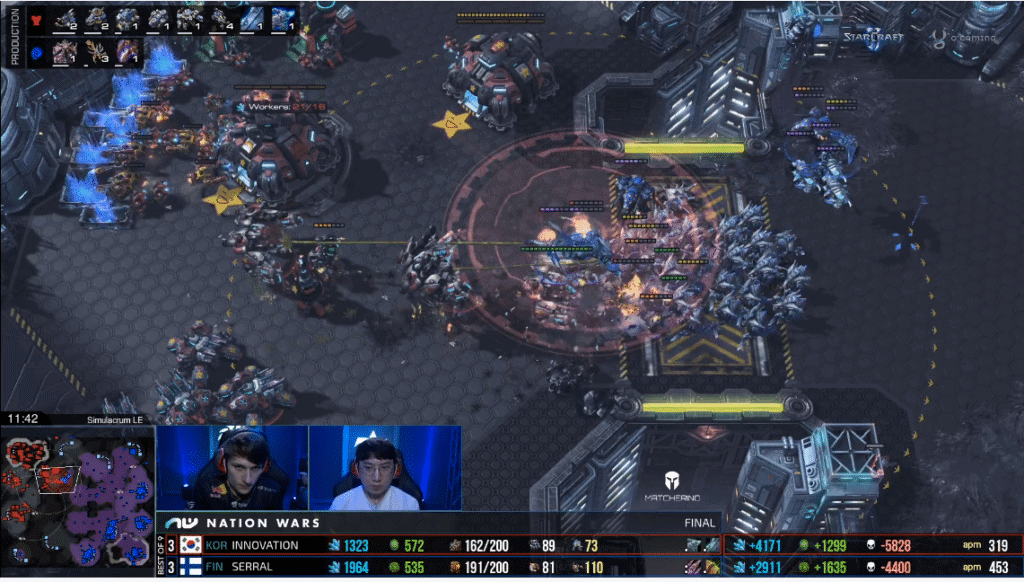 Serral would score the match and put Finland one game away from victory.

South Korea sent in Stats to go up against Serral for a third time in Round 8. Serral once again proved why he’s one of the best Zerg players in the world and dashed any hopes South Korea had of taking home the trophy.

Playing extremely aggressively against Stats, Serral was able to keep pushing constantly. Stats attempted to keep his army together with a mothership, but Serral used Brood Lords to wipe out Stats’ anti-air and completely overwhelm him. 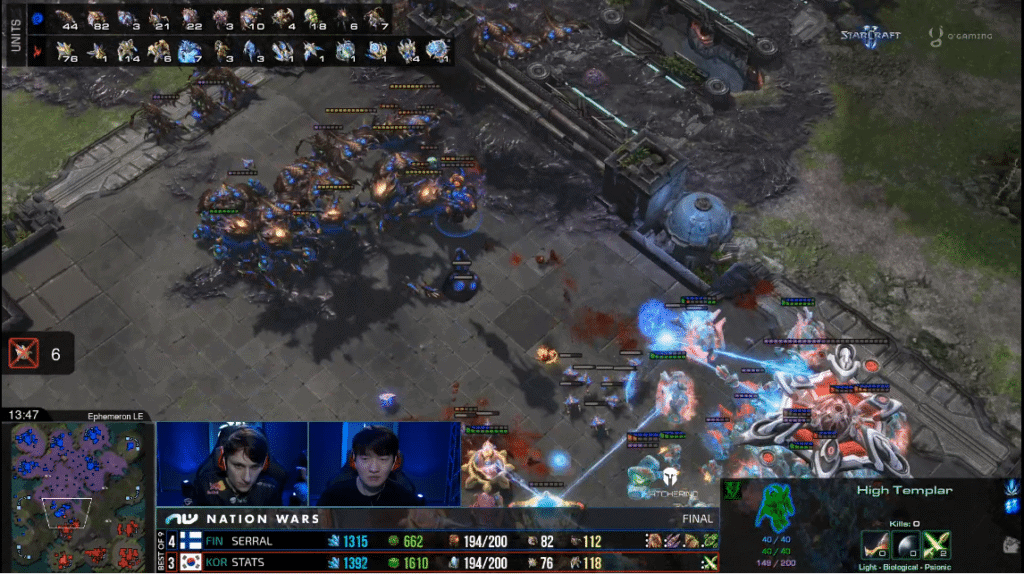 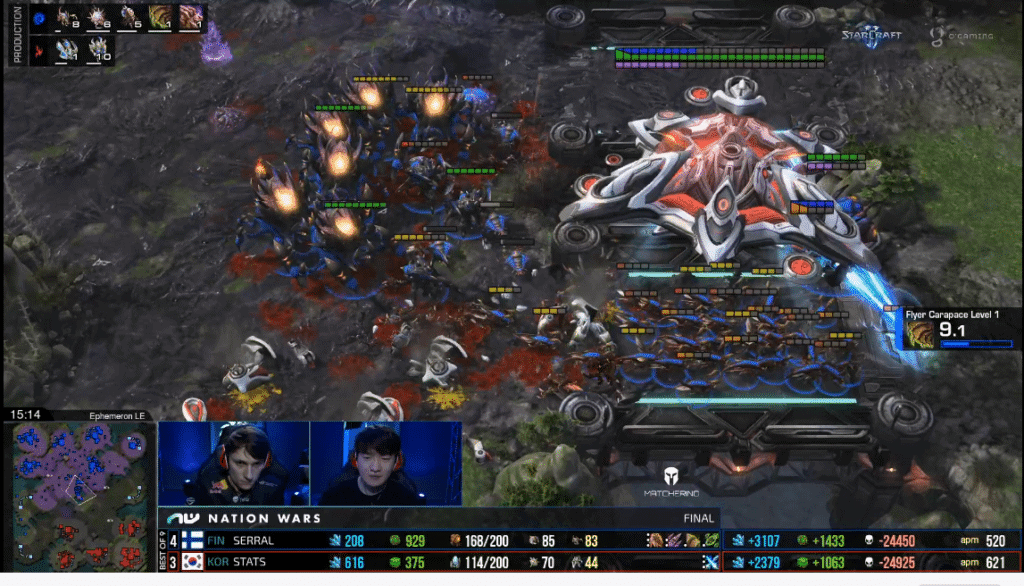 Serral managed to overpower Stats and take home the win in an impressive show of professional Zerg play. Finland went on to take home the trophy and bust South Korea’s previous win streak in Nation Wars.