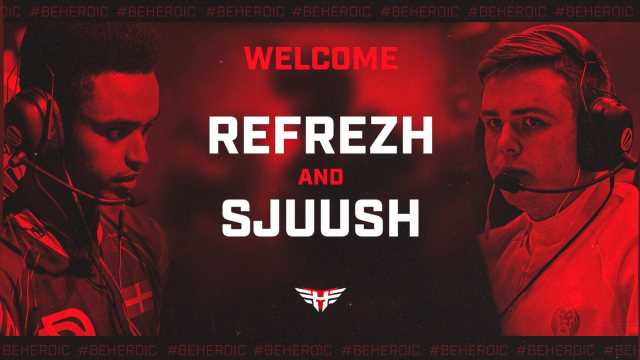 The announcement comes after a dip in the team’s performance, following a period of good online results. However, the team feels those earlier results were not enough to make up for the recent lapse. With the addition of refrezh and sjuush, Heroic hopes to do even better than its previous impressive run.

Heroic captain Casper “cadiaN” Møller has explained the move on the team’s official announcement page. The whole thing has come as a bit of a surprise to the community, although cadiaN has done his best to explain the move.

“We have had a successful run with the last roster but we feel that we can come even further with these changes to the team,” cadiaN said. “Being in this situation, we are very happy that the new Heroic is capable of providing these changes so quickly, for the bettering of the team. I’m very excited to see this happen, and I’m confident both new players will work great in Heroic”. CadiaN went on to thank his former teammates for their work with Heroic. “I would like to give thanks to both Nikolaj and Johannes for their hard work in Heroic, we achieved goals we could only dream of. I wish them the best of luck moving forward.”

Sjuush and refrezh are equally, if not more excited, to take a step forward in their CS:GO careers by joining a well-respected and high-profile team such as Heroic.

“Since I got the offer from Heroic I’ve barely slept, because I couldn’t calm down. I’m so excited to be working with such talented and smart players, they’re really something special,” refrezh said. “The team and the organization have had an amazing year and it’s absolutely admirable what they have done. I’m very proud to now be a part of it, and look forward to work hard and to #BeHeroic!”

“Joining the Heroic family makes me feel at home,” sjuush said. “I can’t wait to start working hard with the boys and prove that this team will be one to remember! This is an amazing opportunity for me, and I know that we’ll do our best to get some big wins!”

Niko and b0RUP have yet to make a public statement on the move, and so far there are no rumors of where they’ll end up. The community is convinced that the two players can find a good home though, given their past performances. For news on that and everything else CS:GO, be sure to check out our CS:GO hub.