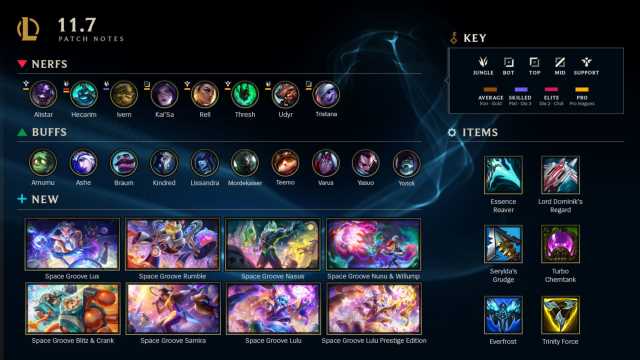 Riot Games has released the full patch 11.7 notes to the public before it hits live servers April 1. The changes are relatively small because of the implications for professional play around the Mid-Season invitational. But, this patch does bring tweaks to champions and items that will be relevant to professional and casual players alike.

Champion changes for this patch are minor, but will be felt by players, especially Hecarim and support mains. Hecarim was hit with a slight nerf to his Devastating Charge ability. The bonus movement speed has been decreased to 65% at max rank, down by 10%. This will decrease his overall damage and taper down his mobility across the map in the mid to late game.

Kindred has also been tweaked a bit, receiving some buffs. Her Dance of Arrows damage ratio has been increased to 75% and Mounting Dread has had its cooldown reduced by two seconds across all levels. Nothing substantial was changed, but Kindred was already a high tier jungler and this may incentivize more players to pick her up.

For supports, Riot has slightly nerfed some of the popular engage champions while showing some love for Braum. Alistar, Rell and Thresh were all hit with tiny changes. Alistar will lose mid and late game damage on his Q and E abilities. Thresh lost some shielding on his lantern and Rell and her stun reduced slightly. None of these changes should push them out of the meta, but will reduce their effectiveness very slightly later into the game. Braum’s ultimate cooldown will be reduced by two seconds at all ranks. His ultimate knock-up duration was also buffed slightly.

The biggest change to champions in this patch may be the Yorick touch-ups. The champion is one of the least played in the game and Riot may be trying to give players a reason to lock him in. His Mourning Mist ability will now have Mist Walkers deal 200% damage when they leap to marked enemy champions and large monsters. Enemy champions and large monsters marked by the ability will now also continuously Awaken nearby graves. This opens the door for the champion to join the jungle as a role and potentially revamp interest in Yorick.

The item changes in this patch are a little more cut and dry for how they will impact the game. Essence Reaver, Lord Dominick’s Regards, Everfrost and Turbo Chemtank were all directly nerfed. Essence Reaver and Lord Dominick’s Regards had direct damage reductions and may now be more situational for some champions. Everfrost was arguably hit the hardest as its activatable ability damage was reduced by 5% and 25 base ability power. Its cooldown was also increased 10 seconds. This should curb the items overall power in the game, but not make it unviable for most champions.

Turbo Chemtank’s active will now only increase movement speed by 60% and slow enemies by 50%. This is a 15% nerf to speed and 10% to the slow.

The biggest change to items in this patch is the change to Trinity Force. The items  passive has been changed as Riot has nixed its attack speed buff. Trinity Force now grants three attack damage, movement speed and ability haste per Legendary item in a players inventory. This opens up the item to many more champions. It also makes it the go-to item for champions that had the item in their rotation of Mythic possibilities.