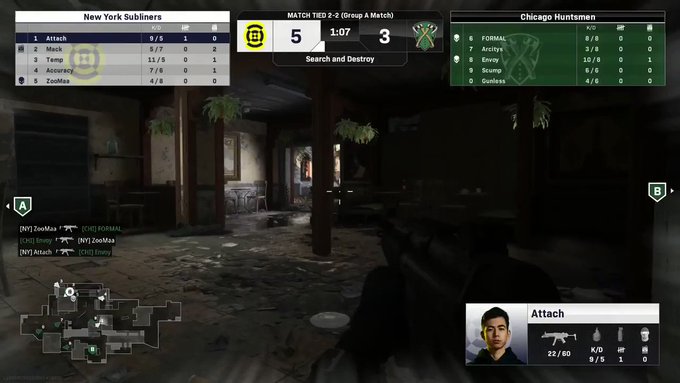 At the start of the weekend, the Subliners were tied with the Los Angeles Guerrillas for 12th place with 10 CDL points. The Subliners hadn’t won a series since the London home series where they defeated Paris Legion. Since then they have been swiftly knocked out of each play-in bracket in 0-2 fashion. This weekend was expected to produce the same results when they were placed in a group with Atlanta FaZe and Huntsmen.

Both Atlanta and FaZe have won tournaments this year already and are currently at the top of the standings. However, the Subliners have shown up to the Chicago home series ready to fight for their own title. In their first match against the Huntsmen, they went 2-0 by winning both the Hardpoint and Search and Destroy. New York won the first Hardpoint in dominant fashion with a 250-135, then closed out the Search and Destroy 6-5.

Subliners close it out in game 5

After their 2-0 lead, Huntsmen began to make a comeback in the series. They won back-to-back maps in Domination and the second Hardpoint. With a 2-2 scoreline, the game would be settled on Ramazza Search and Destroy. The Subliners were able to close the last map out in confident fashion, taking the last game 6-3. With this win, the Subliners go on to face the 2nd place team Atlanta FaZe. Huntsmen will have to fight their way through a losers bracket and face off against the London Royal Ravens. In recent tournaments we’ve seen the Chicago Huntsmen fall flat, even missing out on recent finals. Player Seth “Scump” Abner and Dylan “Envoy” Hannon had this to say about the loss to the Subliners:

GGs to New York! We know we were sloppy and are trying to fix it. Not always so easy to do. We go again tomorrow

GGs NY sloppy games from us gotta bounce back tomorrow

Bill Murray Facing Legal Trouble From The Doobie Brothers, And The Letter Is A Must-Read

Pokémon Sword And Shield Oleana – How To Beat
PS4