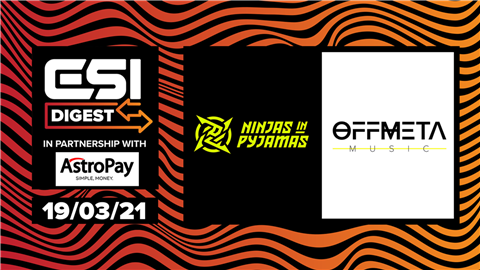 This edition of the ESI Digest is in partnership with payments solution firm AstroPay.

The label will act as a gateway for music companies and artists to enter the esports sector. As such, OFFMETA will represent a range of established and emerging artists which will be integrated into broadcasts and content around esports and gaming.

WWF partners with Ninjas in Pyjamas

Wildlife conservation organisation World Wide Fund For Nature (WWF) is set to collaborate with Ninjas in Pyjamas for the Earth Hour 2021 campaign.

Organised by WWF, Earth Hour is a global effort occurring on March 27th that encourages people around the world to switch off their electronics in support of nature and the planet.

The global fundraising campaign will see both entities collaborate to produce a livestream event series to raise funds and drive awareness for WWF’s wildlife conservation and environmental sustainability programmes. The virtual streaming series will run between March 13th-28th.

ESL UK, a regional branch of esports tournament organiser ESL, has announced it will host a League of Legends: Wild Rift tournament.

The one-off tournament, known as the ESL Wild Rift Premiership, will see teams from the UK, Ireland, and the Nordics compete in one of the first Wild Rift tournaments for the regions.

The amount is expected to be paid in cash and stock, plus an earnout has been agreed by Enthusiast Gaming and Vedatis SAS, Icy Veins’ owners, should certain milestones be achieved.

Durant and Kleiman will join the Andbox team as investors and creative partners, according to a release. Durant and Thirty Five will be active partners across different initiatives for Andbox, including the creation of new entertainment content and the design of new merchandise collections.

ESI Digest, in partnership with AstroPay, is part of the ESI Network, a collection of podcasts encompassing the esports industry. For deep dives into the major areas of esports with subject matter experts, check out ESI Focus. For conversations with key personnel and major stakeholders in esports, ESI Insight is the series for you.