God of the Forge, Purphoros has returned in Theros: Beyond Death as Pruphoros, Bronze-Blooded with a powerful mana ability.

God’s return as Magic: The Gathering revisits the plane of Theros with an emphasis on the underworld. Set to release on Jan. 24, Theros: Beyond Death (THB) utilizes the Devotion mechanic similar to the original MTG Theros block. 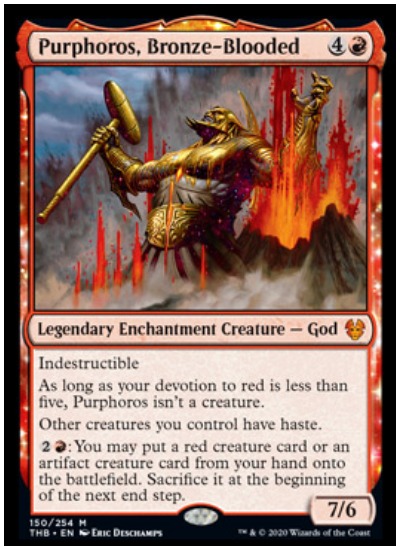 Pruphoros, Bronze-Blooded, much like the other Gods in THB, isn’t a creature unless its devotion is five or more.  Receiving a power boost with its return, Pruphoros gives other creatures Haste and can sneak attack a creature onto the battlefield with a CMC mana ability of three (one Red).

An ideal combo that utilizes Pruphoros’ “sneak attack” in Standard includes creatures like Illharg, the Raze-Boar and Drakuseth, Maw of Flames in Red. And in Gruul there are cards like God-Eternal Rhonas, Cavalier of Thorns, and Aggressive Mammoth. Or there’s also a Boros option with cards like Feather, the Redeemed, and Aurelia, Exemplar of Justice.