As a result of the agreement, Razer will become the official gaming chair partner of Team Queso. The organisation’s players will be provided with Razer Iskur chairs. 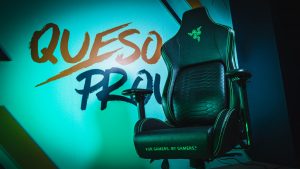 Álvaro González, Team Queso’s CEO, commented: “We are thrilled to start working for the next two years with Razer, a brand that is so well established in the gaming sector.

“Together we grew up in esports and this new long-term sponsorship agreement means a big step in Team Queso’s journey. Razer got our backs.”

Razer Iskur is the company’s first gaming chair brand. Razer is primarily known for its range of gaming peripherals and accessories. According to the release, the chair is designed to ‘address the need for superior ergonomics by esports athletes’.

Team Queso first partnered with Razer back in 2018, with both entities agreeing on a two-year peripherals deal. Team Queso’s other partners include the likes of Samsung, DIGI, and Elgato.

“The last year has been a testing one for esports and the Queso organisation has performed brilliantly throughout, both in-game and out, showing the spirit of sportsmanship and care that makes us proud to be their sponsor.”

The esports organisation has a range of teams across both PC and Mobile titles. This includes competitive rosters in League of Legends, League of Legends: Wild Rift, Clash Royale, and Fortnite, among others.

Esports Insider says: When Razer typically partners with an esports organisation, it’s usually regarding peripherals. As such, it’s interesting to see the company dedicate a partnership purely towards its gaming chair brand. Overall, I think the partnership will likely boost Razer Iskur’s brand awareness, particularly in Spain.