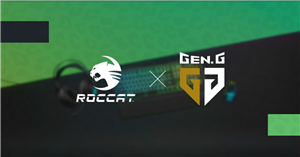 The deal will see ROCCAT become the organisation’s official PC gaming accessories partner for its Overwatch, League of Legends, and PUBG teams, as well as its roster of content creators.

Alongside Gen.G’s players and content creators being equipped with the latest ROCCAT peripherals, the partnership will also see the brand work with the organisation to create a range of ‘unique, engaging, and fun’ content.

Juergen Stark, Chairman and CEO of Turtle Beach Corporation, commented on the deal in a release: “We’re extremely excited to be extending our esports partnerships to Korea with Gen.G Esports – one of the most well-respected esports organisations in the world. We’re growing our business in Korea and can’t wait for the teams, their fans, and gamers in the region to see why ROCCAT is fast becoming one of the most sought-after PC gaming accessory brands.”

Since being acquired by Turtle Beach in 2019, ROCCAT has become the exclusive mouse and keyboard partner of the LCS alongside entering deals with popular content creators Guy ‘Dr. Disrespect’ Beahm and Martin ‘MrSavage’ Foss Andersen.

Arnold Hur, Co-President and COO at Gen.G Esports, also spoke on the partnership: “We are very excited to partner with a brand like ROCCAT and look forward to their  high-performance PC gaming products taking Gen.G Esports and our content creators to a whole new level.”

Esports Insider says: Deals of this nature are nothing unusual. Nevertheless, joining forces with ROCCAT is another solid addition to Gen.G’s existing roster of partners.