Famed Overwatch League (OWL) flex DPS player Jay “sinatraa” Won has retired from the San Francisco Shock. Sinatraa is a beloved OWL player and has been a staple throughout the community for years. He has a longstanding history with competitive Overwatch, with dramatic results on San Francisco Shock. Reports state he will move on to Valorant.

Sinatraa’s ascension in OWL is a Cinderella story. He made a name for himself in the competitive ladder by performing exceptionally well but toting an egotistical personality. From a young age, he committed himself to improve his gameplay. His efforts paid off as he consistently reached top 500 season after season. Eventually, at 17 years old, he signed a contract with NRG Esports, the parent company of San Francisco Shock, for $150,000 dollars.

During his time on the Shock, the team performed exceptionally well. They won their first OWL Championship in 2019 by going 4-0 in playoffs. Furthermore, he was crowned 2019 Overwatch MVP and became the Overwatch World Champion in 2019 with team United States.

The San Francisco Shock team announced Sinatraa’s release from the organization. In a short but sweet tweet, the organization thanked him for his time with the team and wished him well in his future endeavors.

He came, he saw and he conquered.

Thank you and best of luck in your future endeavors @Sinatraa 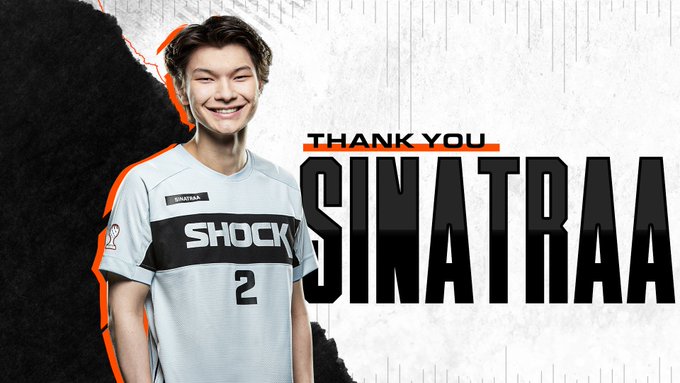 Sources tell ESPN that Sinatraa plans to join the Sentinels’ Valorant team. Furthermore, they explain how the former OWL star’s transition was made difficult. His options for competing in Valorant were extremely limited due to OWL’s guidelines. ESPN states that “Overwatch League barred retiring players from signing with any organization that was parent or sister to a competing Overwatch League team.”

For this reason, Sinatraa is unable to play for NRG’s Valorant team. Furthermore, Overwatch League and Call of Duty League have reportedly prevented players from competing in amateur Valorant tournaments over the past few weeks.

On paper, Sinatraa is a perfect candidate to compete in Valorant. Before pursuing Overwatch professionally, he played Counter-Strike: Global Offensive offline and has always said Jake “Stewie2K” Yip was his idol. His history in bomb-defusal games paired with his professional experience in Overwatch should set him up for a strong career in Valorant.