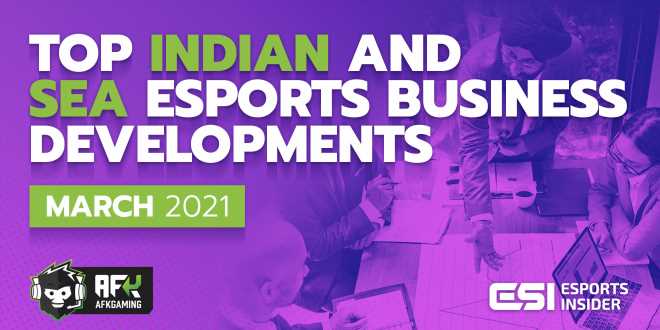 As the various mobile-esport ecosystems in SEA prepare for their marquee competitions, organisations and organisers are bringing sponsors and partners on board along with key hires. The month of March saw a host of new announcements along with a big investment from Krafton into India’s NODWIN Gaming.

These are the key developments for March, in collaboration with AFK Gaming. To read more about a given story, click the corresponding link in the title.

Chinese technology company ByteDance announced the acquisition of Moonton, the publisher behind mobile title Mobile Legends: Bang Bang. The acquisition is believed to be valued at $4bn (~£2.89bn) and was via ByteDance’s video game division Nuverse.

The title is set to compete against Riot Games’s Wild Rift in the mobile-MOBA space. The investment and subsequent initiatives will set the precedent on how the mobile MOBA market will evolve in coming years.

The additional funding will allow NODWIN to support talent, strengthen gaming infrastructures and technology, and organise a multitude of tournament IPs at a national and international level.

100PLUS will provide beverages to all tournament crew, casters and participants. Secretlab chairs will be used by teams competing in the Icon Series.

Indonesia-based esports organisation EVOS Esports announced the appointment of Aaron ‘Qontra’ Chan as its Head of Talent in Malaysia and Singapore. Alongside Chan’s appointment, EVOS unveiled that Azrul ‘J Hunter’ Anwar and Fattah ‘FattahZie’ Zakia have joined as brand ambassadors.

Hong Kong-based esports organisation PSG Talon announced a partnership with Gigabyte’s gaming division AORUS as its official ‘display and PC partner’. The partnership will last until the end of 2021 with the core focus being on Talon’s League of Legends roster, which plays in the Pacific Championship Series.

The 10 esport titles which will be included in the 2021 SEA Games in Vietnam were revealed to be League of Legends, League of Legends: Wild Rift, PUBG Mobile, Mobile Legends: Bang Bang, FIFA Online 4, Free Fire, Arena of Valor and CrossFire. The competition is set to take place from November 21st to December 2nd in the National Convention Center in Hanoi, Vietnam.

AFK Gaming is an India-based esports media and content company that aims to provide quality and consistent coverage about teams, players, tournaments and competitive video games with a primary focus on the Asian region.