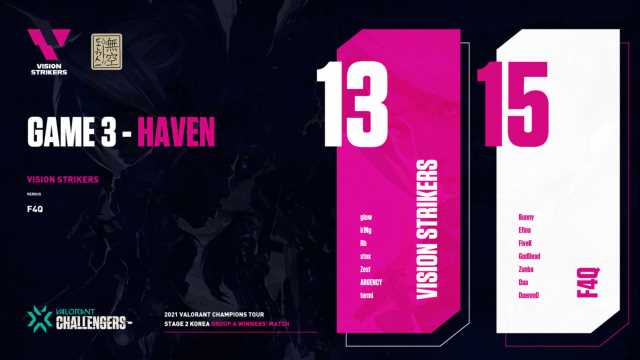 Vision Strikers’ 102 series win streak is over after their loss to F4Q at the VALORANT Champions Tour Stage 2 Challengers tournament. Vision Strikers went up against F4Q in the winner’s bracket of Group A. The series went into overtime twice but eventually went 2-1 in favor of F4Q today, April 15.

Vision Strikers are the most dominant squad in the Korean region as their win streak stretches back to June of 2020. The team won their region’s First Strike tournament and Stage 1 Masters. Vision Strikers are not out of Challengers yet. They will have a second chance against I need Girlfriend next week, April 24. A win against the amateur team would qualify them for the playoffs. The winner of the playoffs will represent the region at Masters 2 in Iceland.

How F4Q ended the win streak

The series started on Bind as Vision Strikers went with one of its standard compositions. With Kim “stax” Gu-taek on Breach and Goo “Rb” Sang-Min on Jett, the team executed many of the plays that gave them dominance over the region. But, despite winning the first two rounds, F4Q came out of the half ahead 7-5. Vision Strikers reversed that score in the second half to force overtime.

F4Q ran a double Duelist composition with a Killjoy that could take space quite easily.  The teams traded rounds back and forth until Vision Strikers took the rounds 29 and 30 to end the series 16-14.

Split was a different story as F4Q took the map convincingly 13-6. Split is traditionally Vision Strikers’ best map, as they have a 93% win rate on 30 games played according to vlr.gg. F4Q went with a double duelist composition again with Astra, Killjoy and Sage backing up the entry players. F4Q’s Sage, Kim “GodDead” Sung-sin, topped the leaderboard that game with 22 kills.

Vision Strikers went into their defensive half down 8-5. Defense is their strongest side statistically, so a comeback was not out of reach. But, F4Q closed out the map in the next seven rounds.

On the final map, Haven, Vision Strikers had to force overtime again. They split both sides 6-6 as the map went down to the wire. F4Q continued with their same composition, with Sova returning instead of Sage, as the two Duelists led the team in kills. Chae “Bunny” Joon-hyuk, on Raze, and Yoo “fiveK ” Sung-min, on Reyna, helped bring the squad over the finish line in the final rounds. Both had triple kills that secured the rounds as FQ4 ended the series 15-13 on the map.

With the win, FQ4 has secured a spot in the playoffs and Vision Strikers will play one more series to determine its fate on April 24.