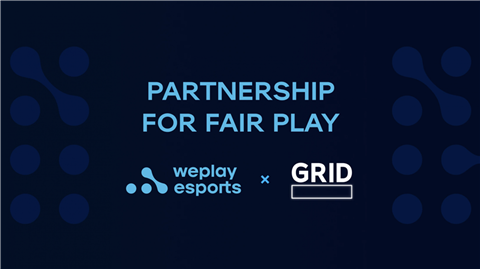 The partnership will see WePlay Esports provide in-game data to GRID during its tournaments to support ‘fair and open play’.


GRID’s core data services and its integrity monitoring will be included in the agreement. This will apply to the tournament organiser’s core titles, CS:GO and Dota 2. In turn, the partnership sees GRID be named the technical partner and data provider of WePlay Esports.

Additionally, the tournament organiser has cited that it may expand the partnership to other games and future projects.

Valentyn Shevchenko, Business Development Lead at WePlay Esports, commented: “We are pleased to sign a one-year partnership with GRID and to be working together on building trust and enhancing the transparency of tournaments’ competitive component. We want to see fair play — same as the audience of esports competitions.”

WePlay Esports and GRID are official members of the Esports Integrity Commission (ESIC), an entity created to promote and facilitate competitive integrity in competitive gaming. As Shevchenko alluded to, the partnership will allow WePlay Esports to be more transparent during tournaments, through GRID’s services, which strengthens its integrity.


Charlie Hanley-Nickolls, VP of partnerships at GRID, added: “We are at yet another massive growth moment for esports. At GRID, our goal is to partner with those who truly understand the intersection of competition and entertainment value.

“WePlay is the full embodiment of this ideal. GRID data solutions paired with WePlay Esports’ ability to bring in top-level play and production quality creates a powerhouse of esport fan engagement.”

The partnership follows on from GRID’s collaboration with the Counter-Strike Professional Players’ Association (CSPPA) last month to enhance the CSPPA World Ranking.

In 2021, WePlay Esports has primarily focused on developing its FGC division, with the introduction of Ultimate Weekend Brawl and the debut of the Ultimate Fight League later this month.

Esports Insider says: Tournament operators ensuring ‘fair and open play’ is naturally vitally important in the esports space, and so it comes as no surprise to see WePlay Esports partner with GRID to bolster its CS:GO and Dota 2 offerings.