Yu-Gi-Oh! Rush Duel Dawn Of The Battle Royale!! is the newest Yu-Gi-Oh game to be released by Konami, although the international audience may not be all that aware of it since it's a digital Nintendo Switch eShop exclusive outside of Japan.

Dawn of the Battle Royale is based on the latest anime series, Yu-Gi-Oh Sevens, but it introduces much more than just a few new types of cards, and as longtime duelists might notice, it's different from the many past Yu-Gi-Oh games they may be used to, although there are still some familiar elements. Here's what beginners need to know. 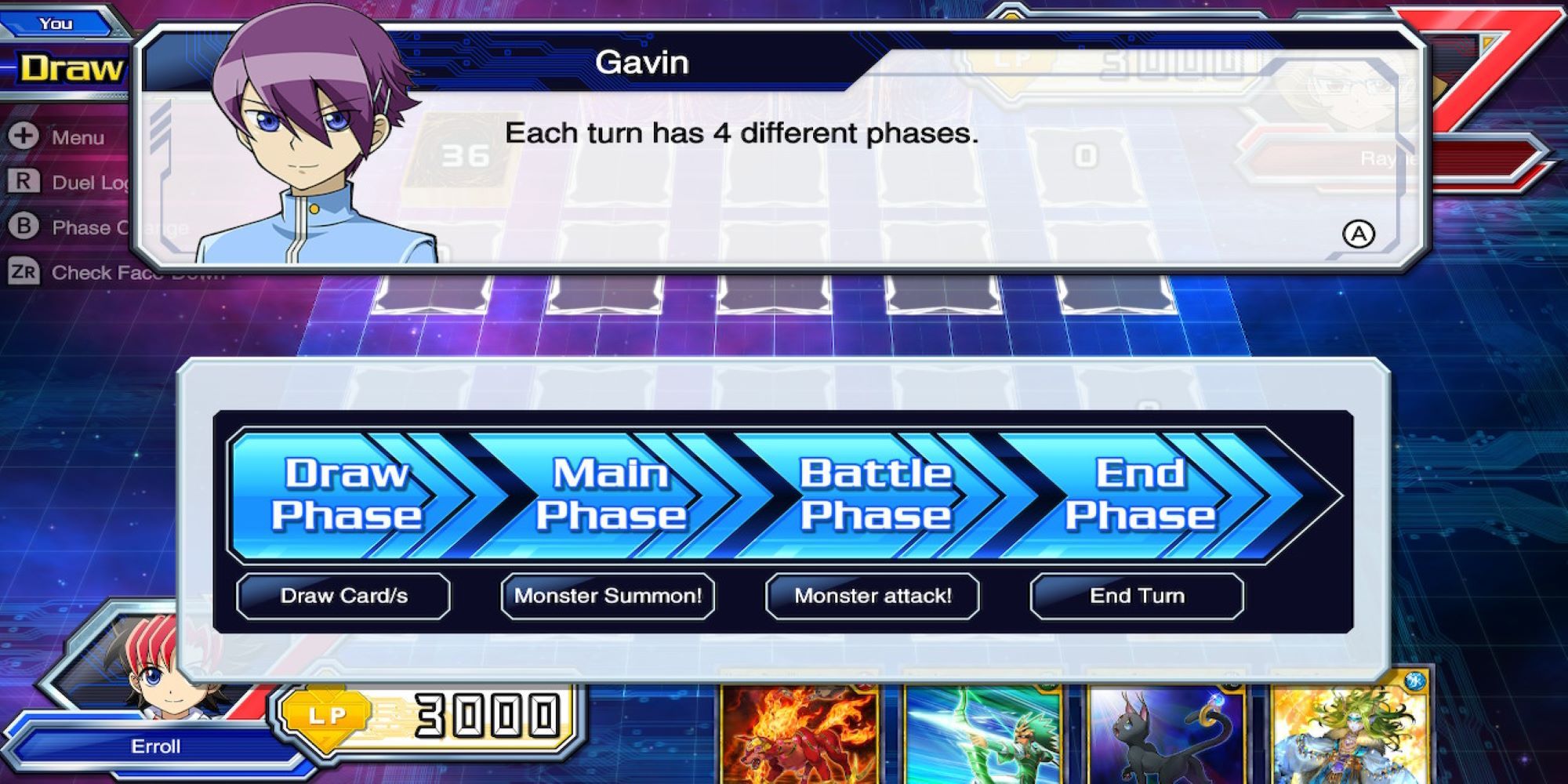 Feeling overwhelmed by the different types of cards that have been added to the traditional format over the years? The good news is that Dawn of the Battle Royale uses the new Rush Duel format, which has been simplified for easier play.

Rush Duels do have some rules that you will still have to become accustomed to, but luckily they're not hard to understand. In addition to some new rules, Rush Duels also lack the Standby Phase and Main Phase Two of the traditional format to help speed up duel pacing, which may feel familiar to fans who have played Duel Links or have engaged in the previously introduced Speed Duel format.

9 The Draw Phase Is Even More Important 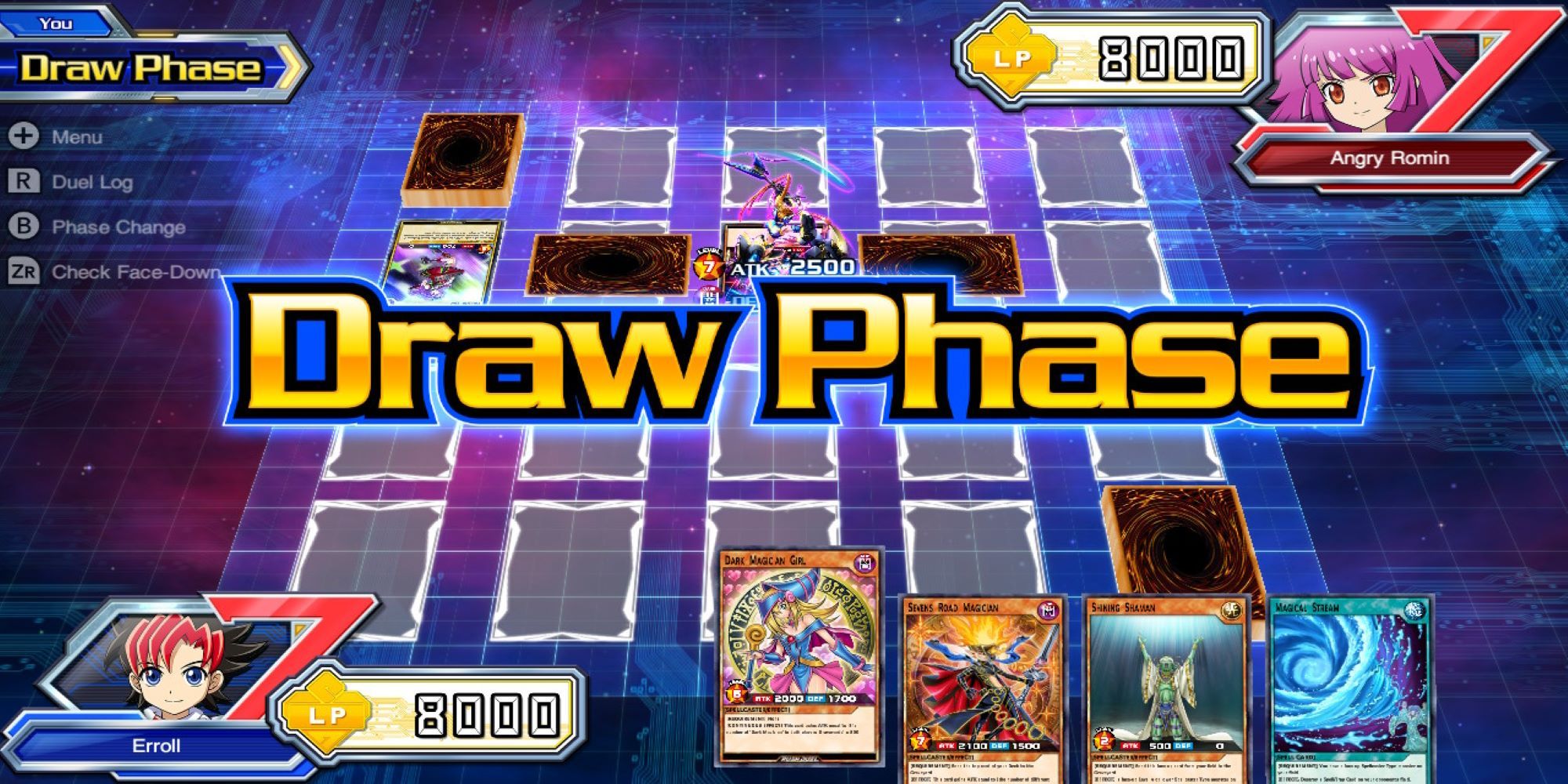 Remember how players would initially draw one card on each turn, and recently, the first turn player didn't? Well, forget about that because, in Rush Duels, players draw up to five cards every turn, drawing only one card if they already have five. There is also no limit to the number of cards in a player's hand.

Still, players aren't likely to keep all five cards in their hand unless they're using a particularly terrible deck or find themselves in a sticky situation. The draw phase was always critical since drawing the right card could result in a comeback victory, but now it has even more crucial than ever before. 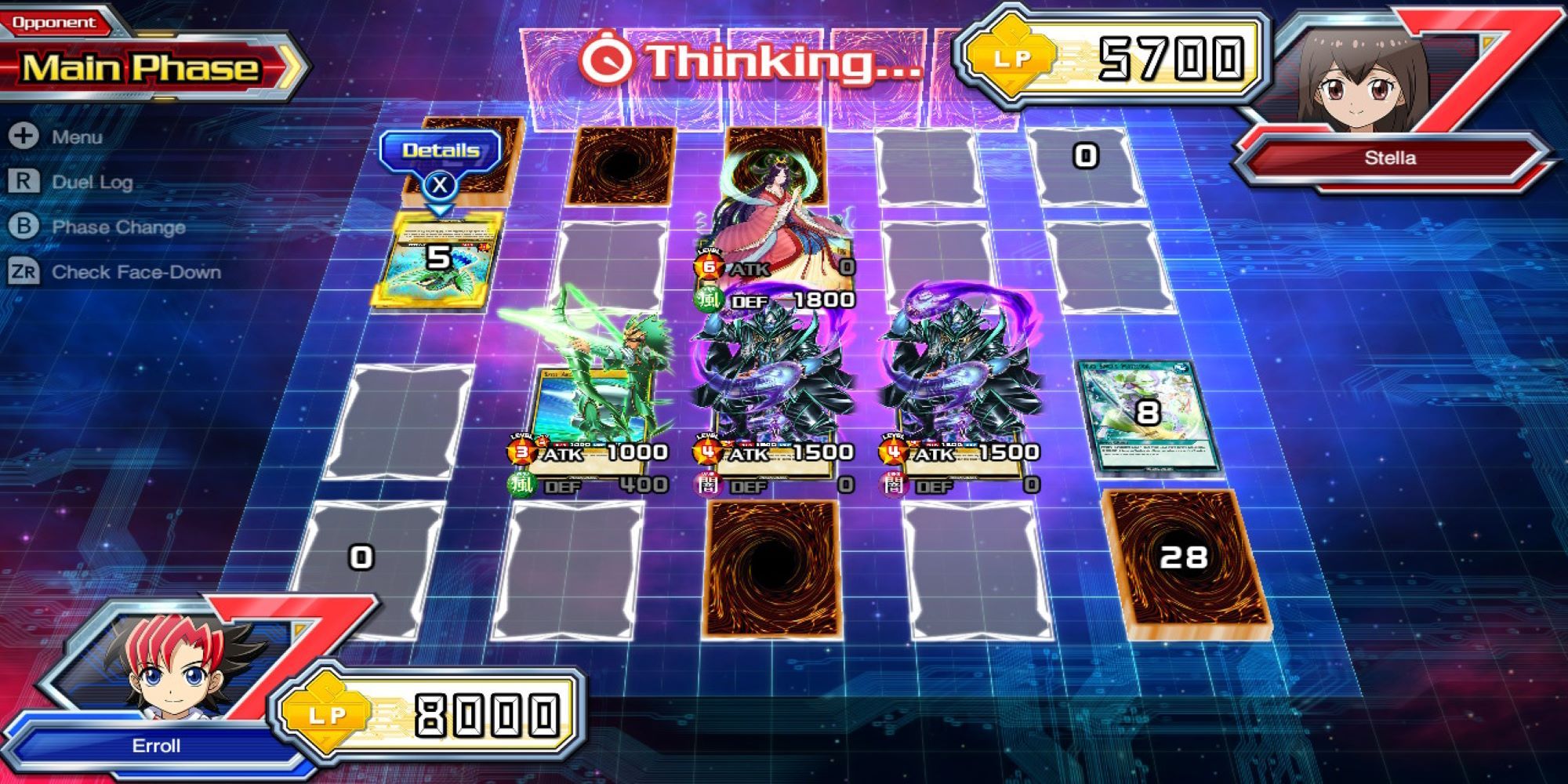 Players will usually use most of what's in their hands in Rush Duels because they can now summon as many monsters as they want as long as they meet the requirements and their monster zones aren't full. However, there are only three monster card zones instead of the standard five.

This also means players can tribute summon multiple times in one turn without needing to use specific card effects for special summoning, as long as they still meet the requirements, of course. Five and six-star monsters still require one tribute, and monsters with seven stars or more still require two, so you still have to be careful not to put too many high-level monsters in your deck.

7 Classic Cards Are Still Around 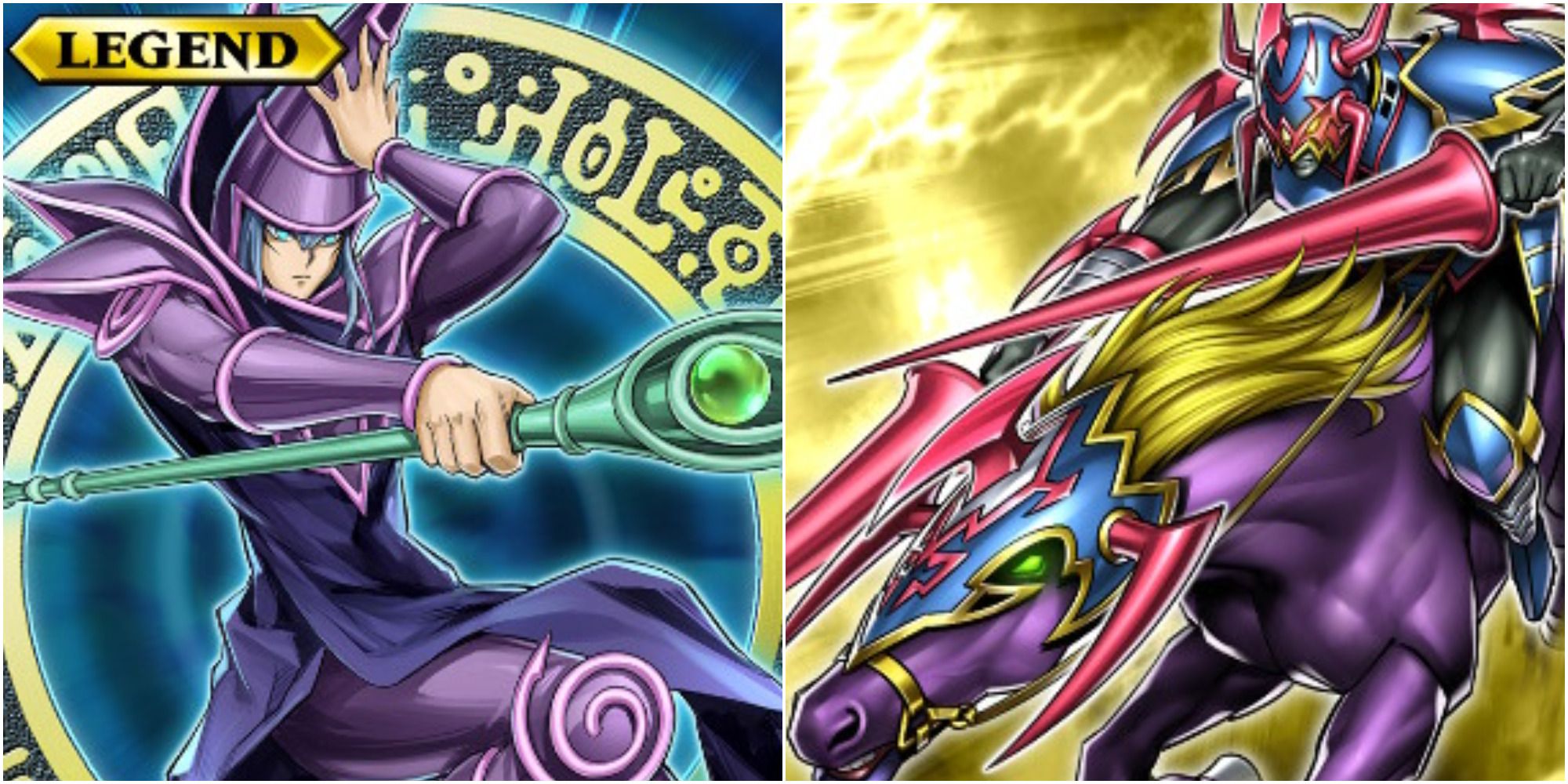 The new format comes with plenty of new monsters as well as new Rush Duel versions of the older cards that fans have come to know and love. Some of these cards, such as Dark Magician and Blue-Eyes White Dragon, are known as Legend Cards and are limited to only one per deck. However, this encourages players to try new cards and combinations.

Additionally, there are also Rush Duel reprints of other familiar monsters, spells, and trap cards, such as Gust and Gaia the Fierce Knight, who for some reason isn't a Legend card. Maybe he wasn't fierce enough? 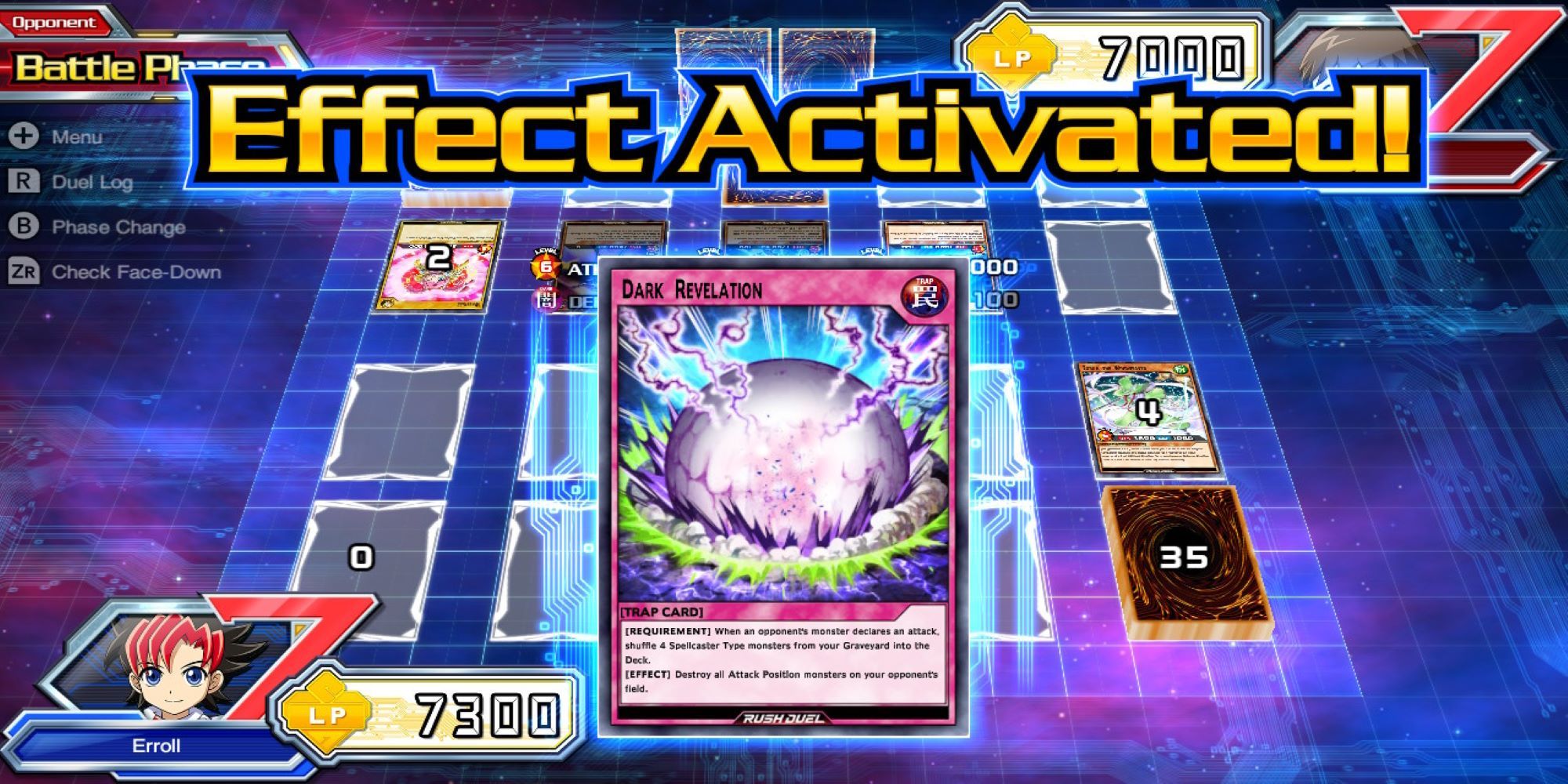 A correctly timed trap card can still turn the tide of a duel; Rush Duels just limit their use compared to the traditional format. Luckily, Jinzo and other activation negating cards are still around for those wary of face-down trap cards due to past experience.

5 Custom Deck Making Has To Be Unlocked 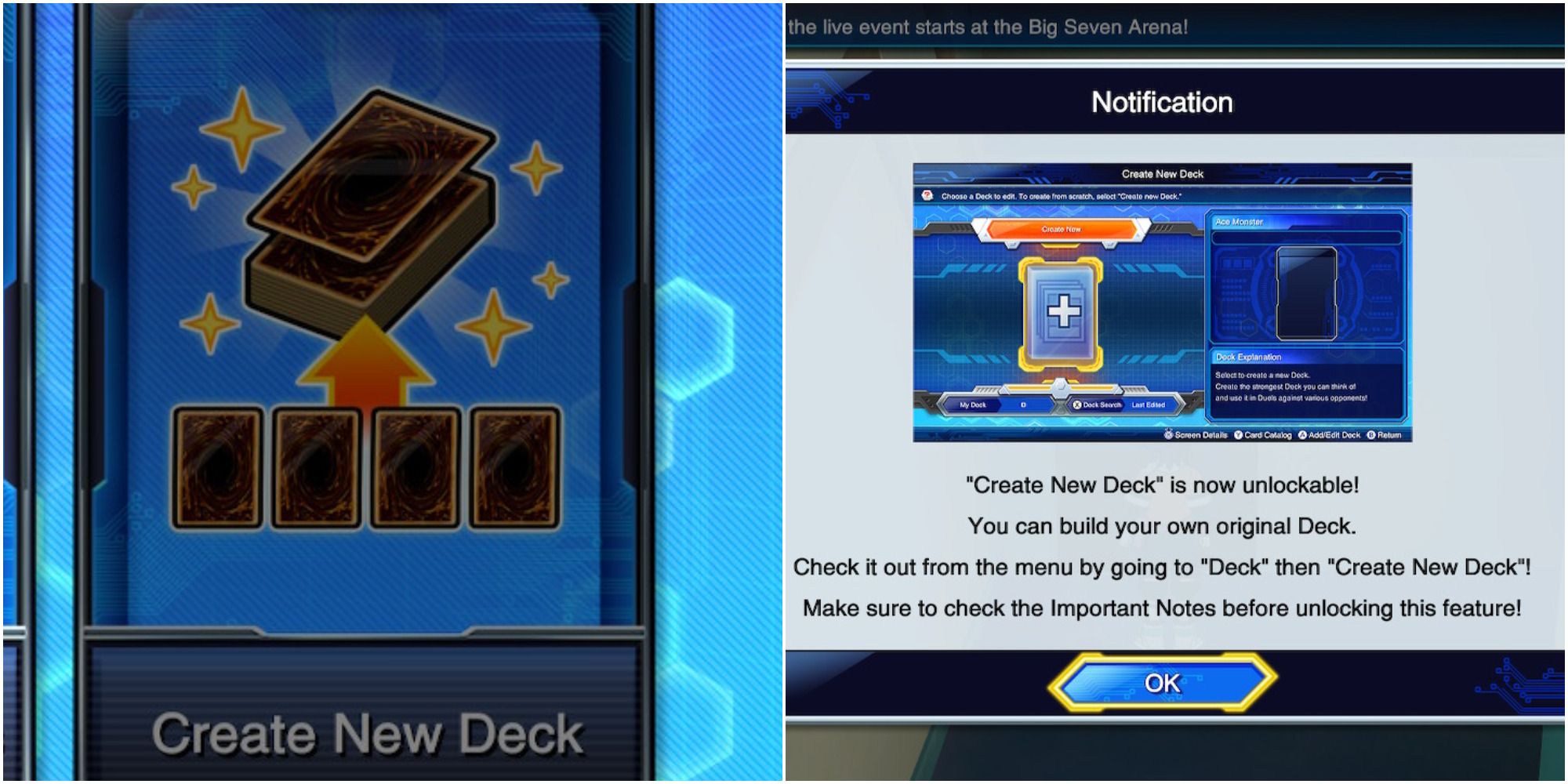 One annoying aspect of Dawn of the Battle Royale is that custom decks normally can't be created until after the story is finished. Unfortunately, players have to rely on premade decks and deck recipes they've completed until then. This is an excellent option for those who are still learning don't mind grinding for more cards.

However, players who do already understand the new rules well enough can go in front of the rightmost door inside the student council room once they have it unlocked (where the minimap disappears) and input the Konami code to unlock the feature. While hiding the option until the postgame isn't the best feature, at least a way to unlock it early is still provided. 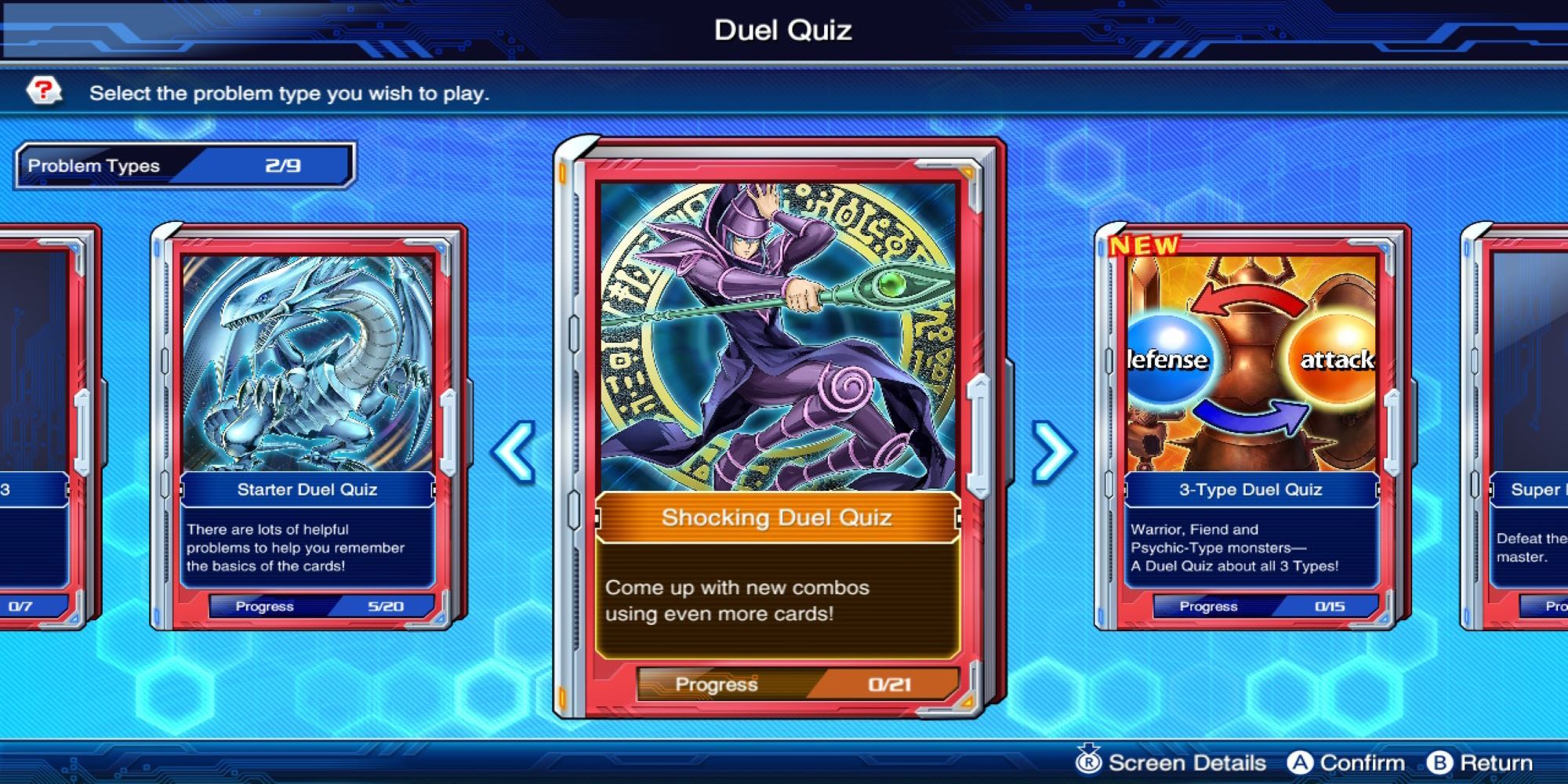 Players that are having trouble adjusting to the new format and aren't gaining much GP (the currency used in the game) can complete Duel Quizzes to help with that. Duel Quizzes let players learn how to deal with different situations and usually reward 1000 or more GP when completed, although some quizzes reward tickets that can help players obtain rare cards instead.

There are several different duel quiz levels that can have up to 21 quizzes, meaning a massive amount of GP can be obtained from just one level. If players are willing to grind, completing these quizzes can help them add more cards to their collection and will help them understand the effects of various cards as an additional benefit. 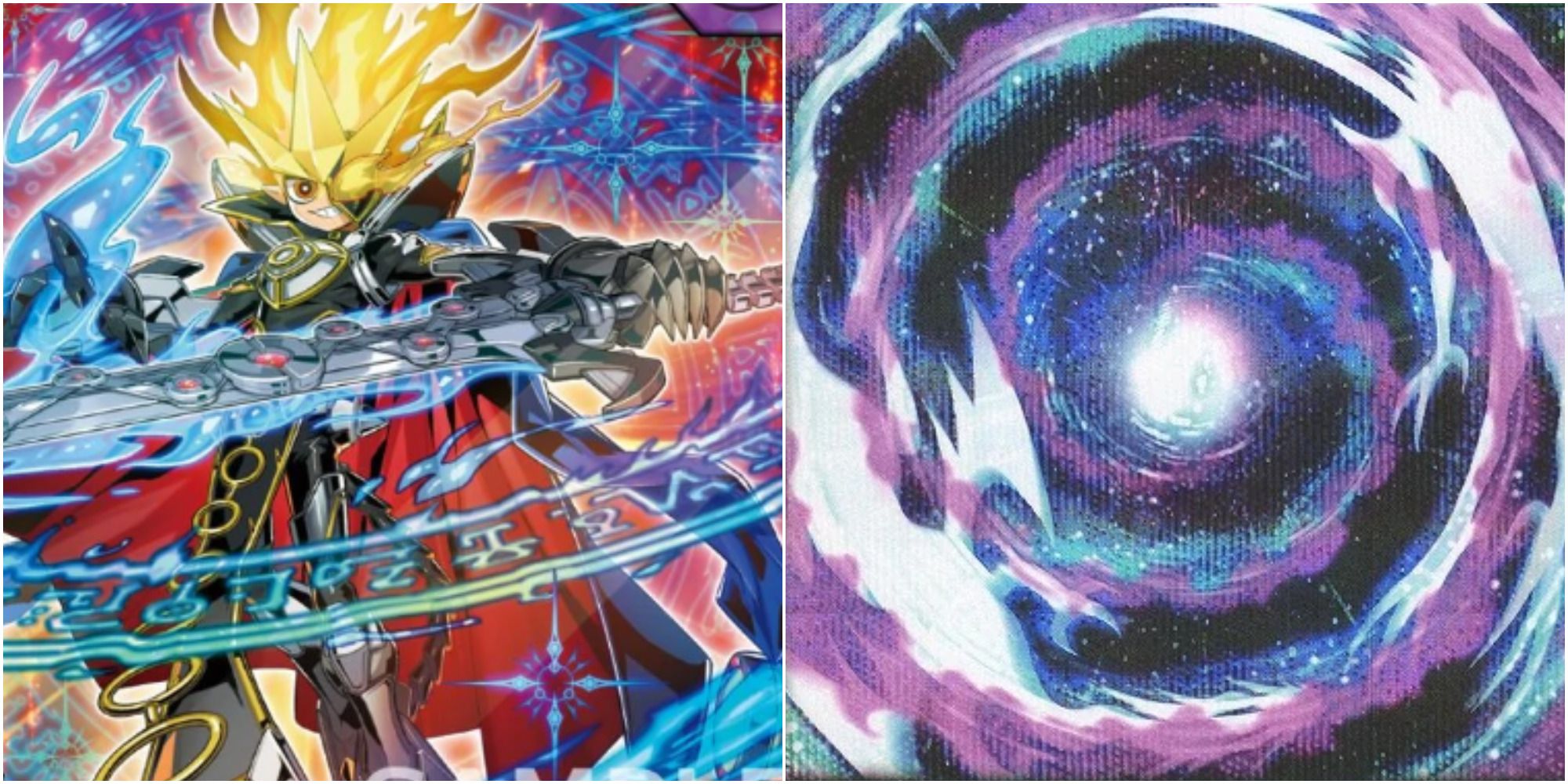 The Extra Deck may still be present in Rush Duels, but it is rarely used and fans no longer have to worry about their opponent spam summoning or constantly returning monsters to and from it, as they had to with Elemental Heroes and Neo-Spacians, at least until they have Rush Duel versions.

While the Rush Duel format does feature a few fusions, they are not encountered often at all and feel similar to how they did in the classic Yu-Gi-Oh format after the first few card sets were released – when they were only encountered in high-level play and the Polymerization spell card was necessary for all of them.

2 Maximum Monsters Are New And Powerful 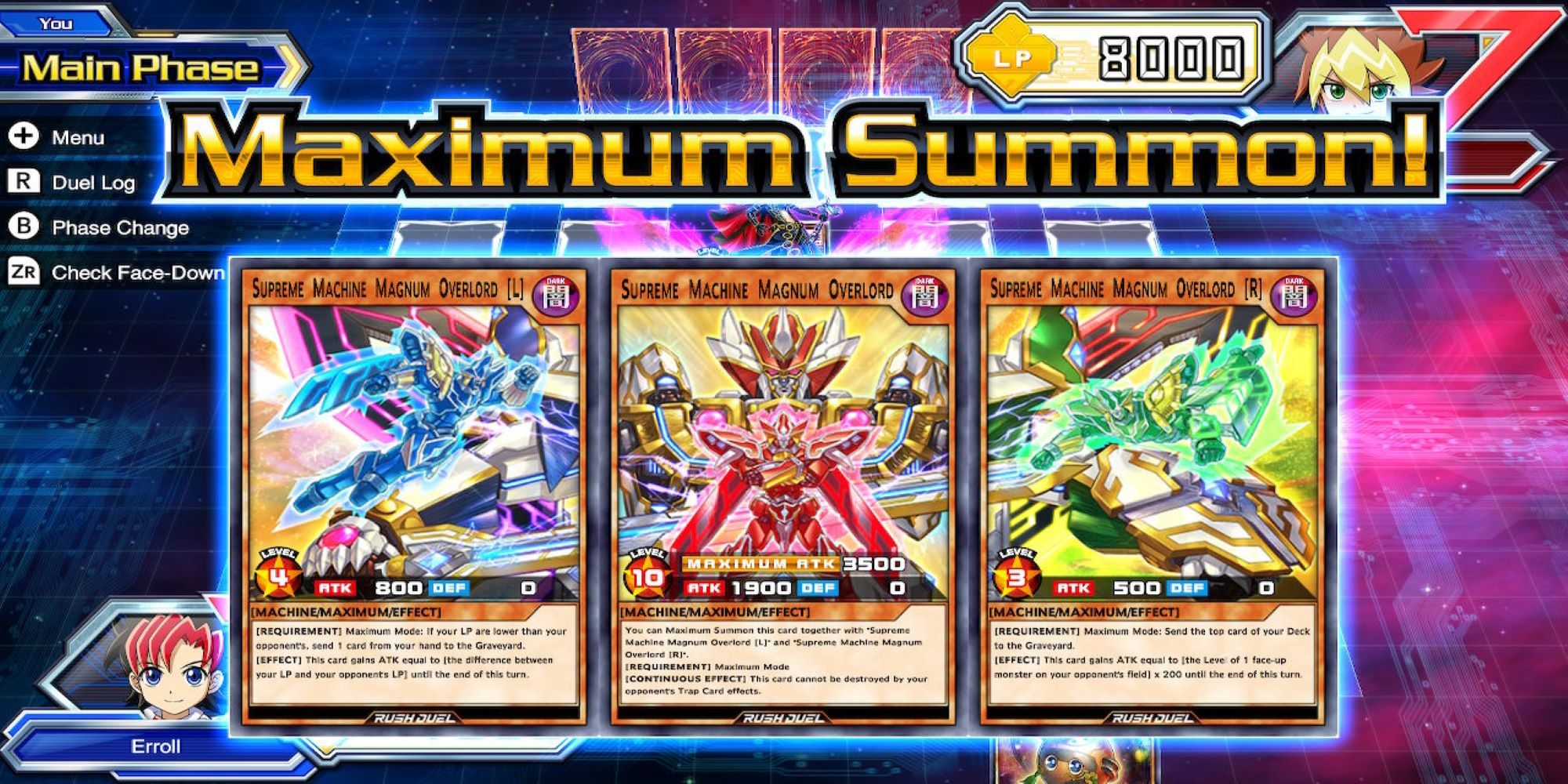 While previously introduced Extra Deck monsters and Pendulum summoning are a thing of the past, Rush Duels still introduce a new type of monster known as Maximum Monsters. These combine three separate cards to make one creature that takes up all of a players' monster card zones. 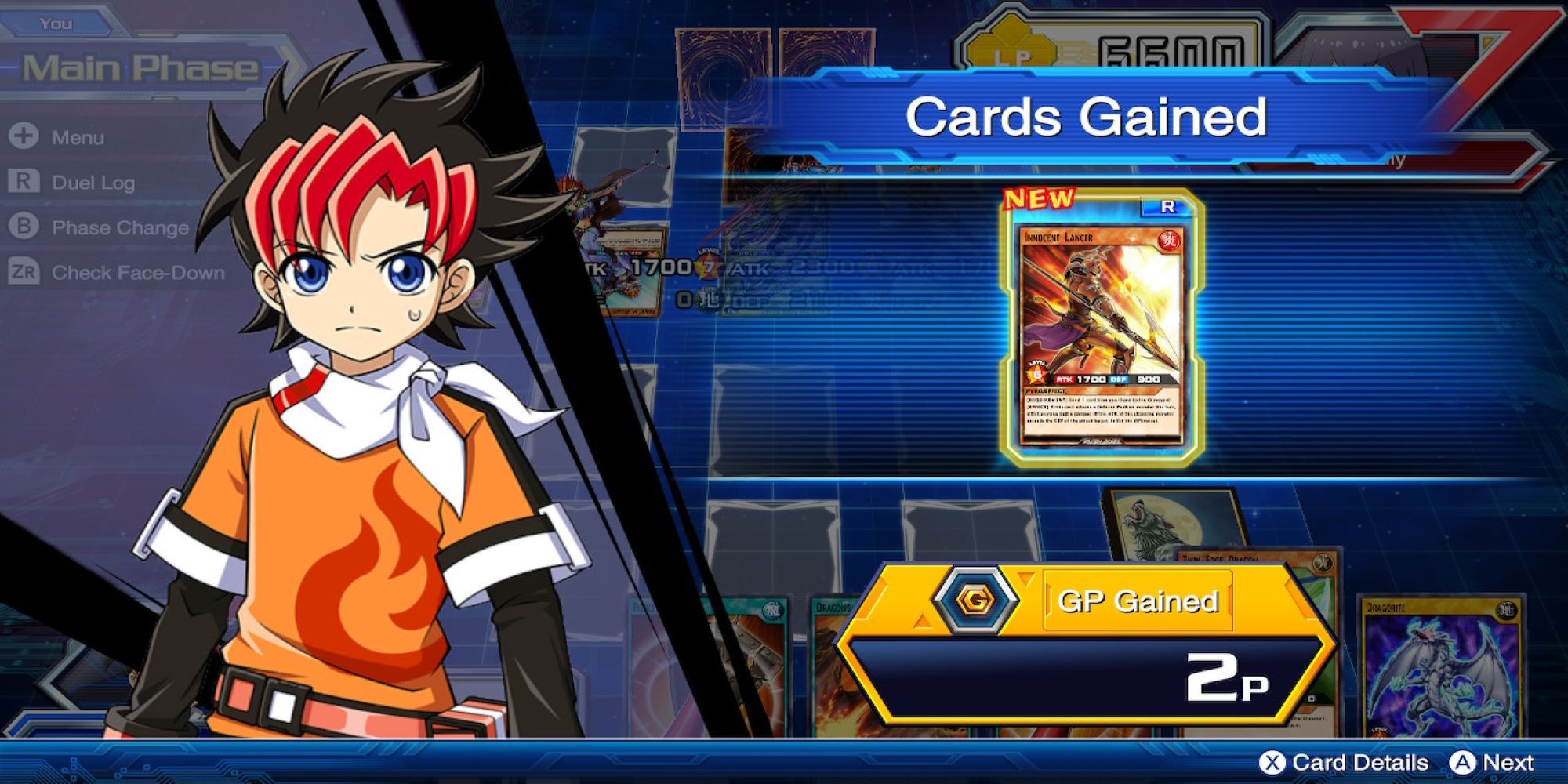 While losing a duel can feel bad and doesn't yield the same rewards as winning, rewards are still given. The loser will receive a measly single-digit amount of GP and only one card, but that one card could be just the one you need to complete another deck.

Of course, winning is more beneficial, awarding hundreds to thousands of GP and four cards instead of one, but at least players are allowed to retry the duel immediately after losing. However, players have to forego the retry option if they want to change or edit their deck first. Losing may not be as beneficial as winning, but it still has its perks.