The SN30 Pro+ is the first full-size gaming controller from 8BitDo, building upon an already solid track record of smaller-sized offerings. With the SN30 Pro+, 8BitDo maintains the classic Nintendo design cues and modern features present in other models, but offers robust software on the PC that enables deep customization options.

At first glance it looks like a SN30 Pro with handles, but its larger size makes it more comfortable for longer gaming sessions. And while the SN30 Pro+ is the best pro controller option for the Nintendo Switch, it has some stiffer competition on the PC—which is where I’ll be focusing this review. 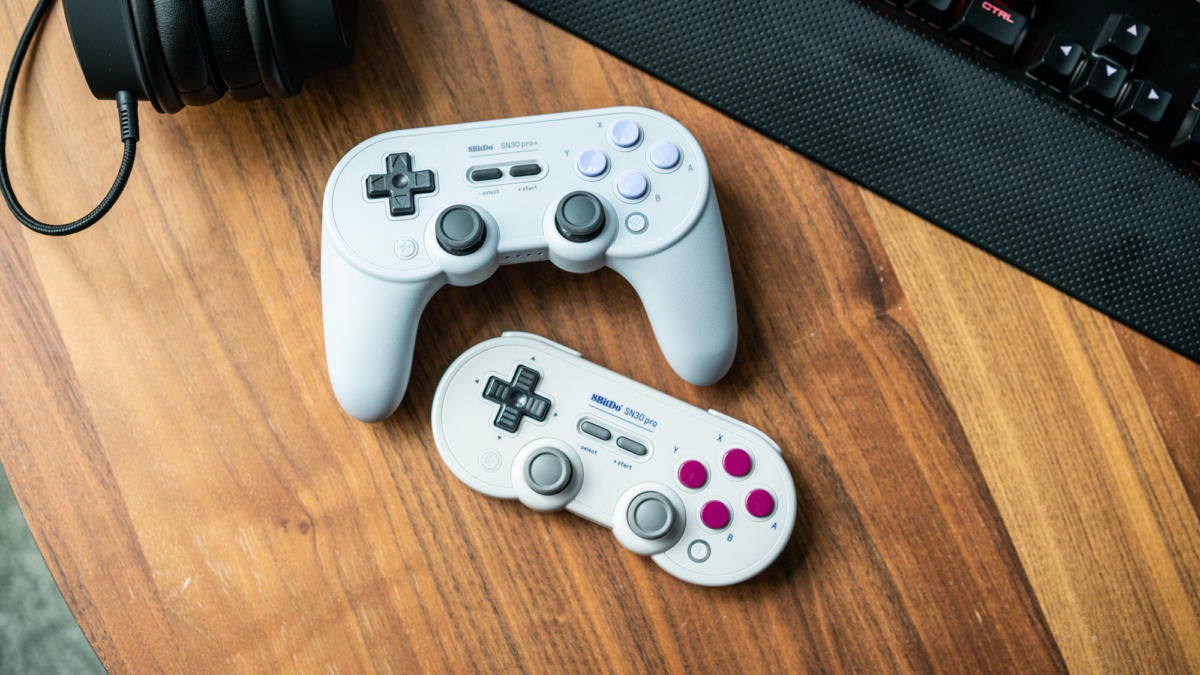 The SN30 Pro+ is currently priced at $49 on Amazon and comes in three color configurations: Sn Edition (SNES color scheme), G Classic Edition (Gameboy), and Black Edition. It works on Windows 7 and above, macOS 10.7 and above, Android 4.0 and above, Steam, Nintendo Switch, and Rasberry Pi. It uses Bluetooth 4.0 to connect and charges the included battery pack via USB-C, but will switch over to wired mode when plugged in. The 1,000mAh battery pack is also removable and can be swapped out for AA batteries. Powering on and switching between input modes is the same as with previous 8BitDo controllers, as is pairing and reading the four LED indicators. 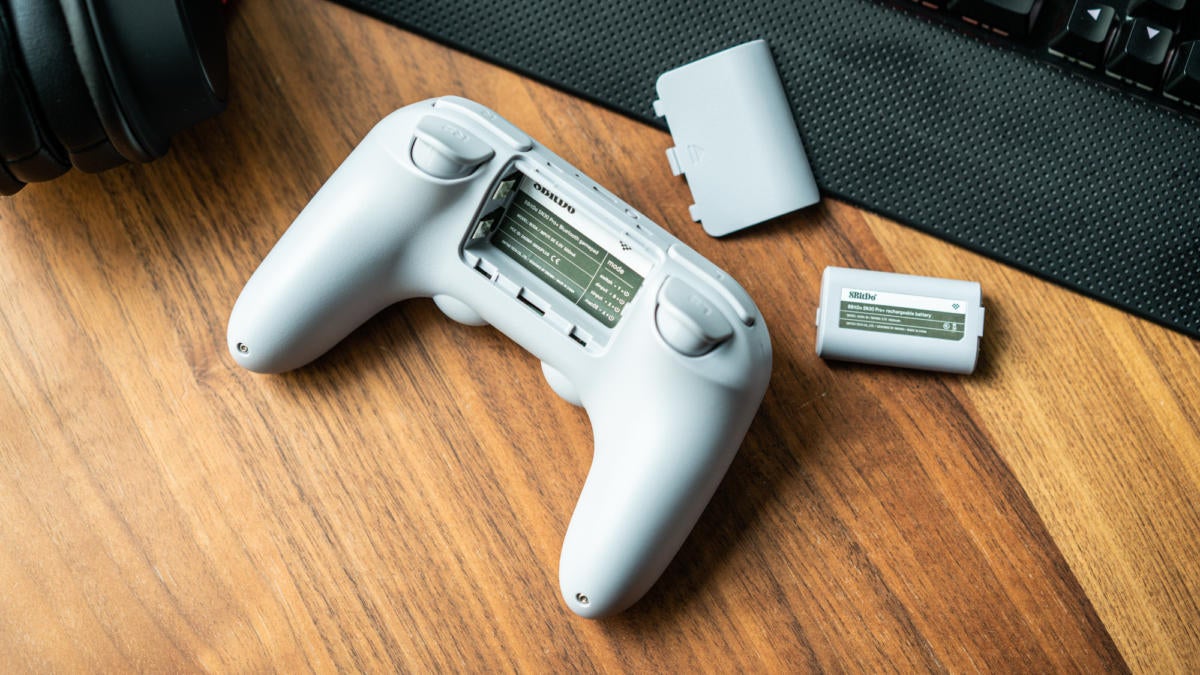 When laid next to one another it’s immediately obvious how the SN30 Pro was the basis for the SN30 Pro+’s design. While visually they are similar, the feel of each controller in the hand is completely different. The SN30 Pro+’s addition of handles changes the way the controller is placed in your hands, offering a steadier grip and more comfortable thumb placement on the thumbsticks. The handles are thinner than those on the Xbox One controller, but still fits nicely inside the palm. Overall it’s similar in size, weight, and layout to the DualShock 4 controller. 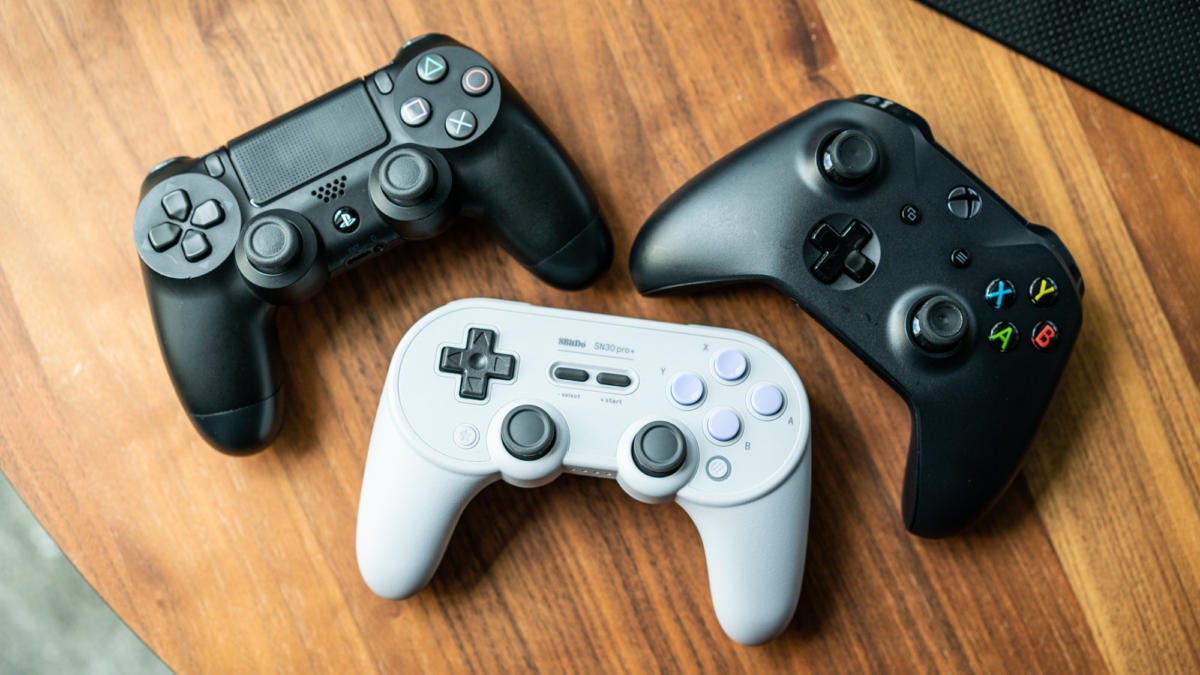 The buttons and sticks on the face of the SN30 Pro+ have shifted ever so slightly—we’re talking sub-millimeter measurements—to allow a bit more room between each input option. The thumbsticks are just a tad wider, and the face buttons are slightly further from the sticks, to name a few changes. It’s a small, refined, but welcome improvement. As for the feel of the face buttons, d-pad, and thumb sticks, it’s almost identical to that of the SN30 Pro that came before it. The practical difference I could feel was that the d-pad is a bit more mushy, but that could be within the limits of manufacturing and not an intentional change. The major input changes are the expanded shoulder/trigger inputs. 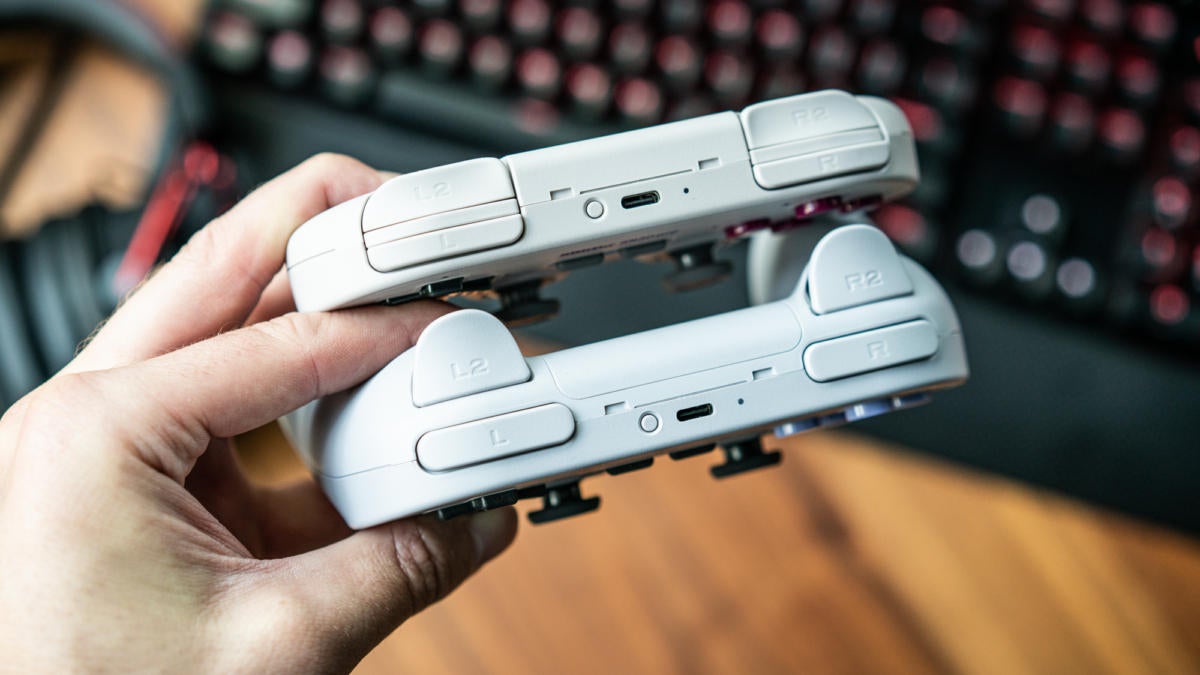 The L and R buttons on the shoulders of the SN30 Pro+ are placed like they would be on the SNES, and they feel great. They have just the right amount of click to them and are more comfortable to use than the slivers on the SN30 Pro. The L2 and R2 triggers are now larger and offer analog movement with adjustable trigger sensitivity (more on that later). Once again, the SN30 Pro+’s triggers resemble the ‘paddles’ on the DualShock 4 rather than the ‘gun style’ triggers on the Xbox One. The resistance on them is very nice and feels great to use even in twitch games.

My only gripes with the design is that the ‘face’ of the controller is angled a bit more away from me than I would prefer. It means that my thumbs rest nicely on the thumbsticks, but have to reach a bit when moving to the higher inputs like the X button and Up on the d-pad. It’s a preference thing, and might be good for some, but I prefer the placement of the Xbox One controller inputs. 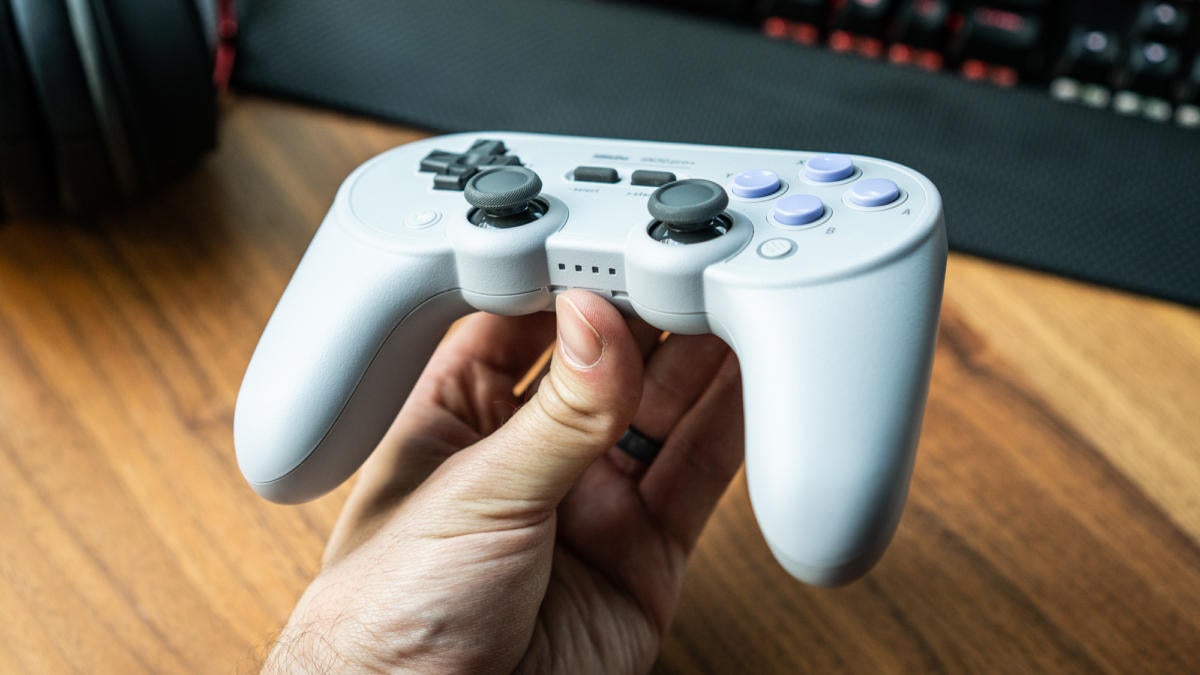 On top of that, the A and B buttons are swapped from how they are laid out for X-input. I don’t look down at my controller when I’m playing so it’s not a really problem at all, but visually it is backwards and something to note.

Connecting the SN30 Pro+ to a PC and installing 8BitDo’s Ultimate Software unlocks a whole host of new features that aren’t available on any other controller—let alone 8BitDo’s. Along with simple options like button remapping and vibration control, the Ultimate Software has options for adjustable controls on the sticks and triggers. 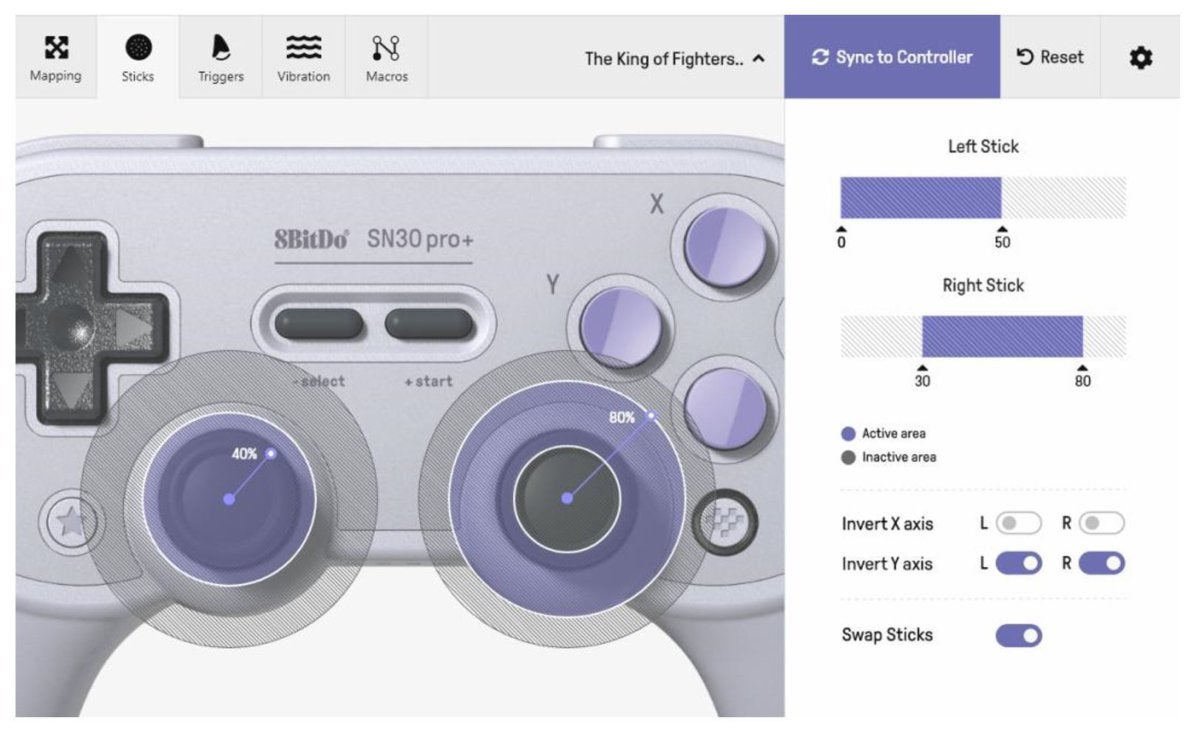 Think about how the Xbox One Elite controller has its hardware-based trigger locks, limiting the movement of the trigger to half the length of the pull. On the SN30 Pro+ it’s a digital reading rather than a physical one, meaning I can have the trigger register as fully pulled by only pulling it part of the way. You can also change the point at which the trigger pull gets registered, eliminating false presses. This can be done for each trigger and thumbstick individually, and provides limitless options for how you tailor your play style. 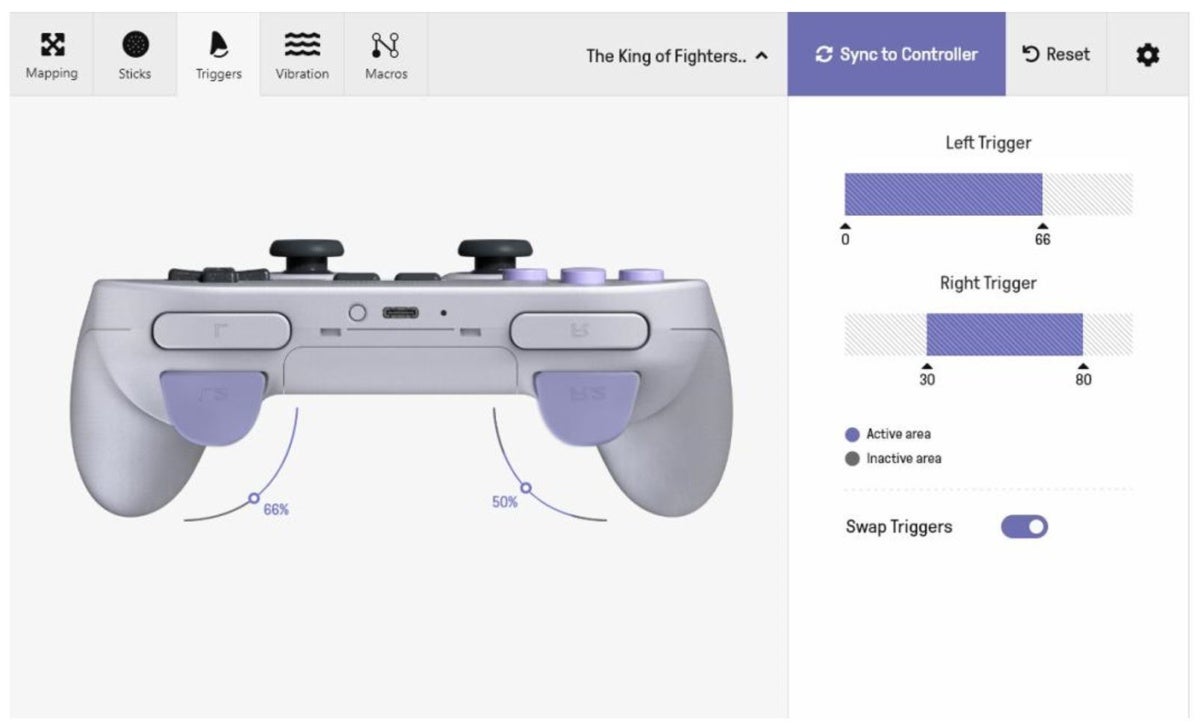 For the most part I left the triggers and sticks in the default position, but I added a profile to the controller for shooters. In this profile I have the left trigger register a full pull at around halfway, meaning my gun raises quicker to look down the sights. I also have my left thumbstick register as fully activated at around halfway, meaning my character goes from standing to running quicker in the games where I don’t need to sneak or have finer movement control outside of aiming down the sights.

The last major feature to note is the option to map macros. Macros can be assigned to buttons and activated by pressing Up on the d-pad and pressing Star (located to the left of the left thumbstick). The setup is very easy to use and can be very handy for those who need it. 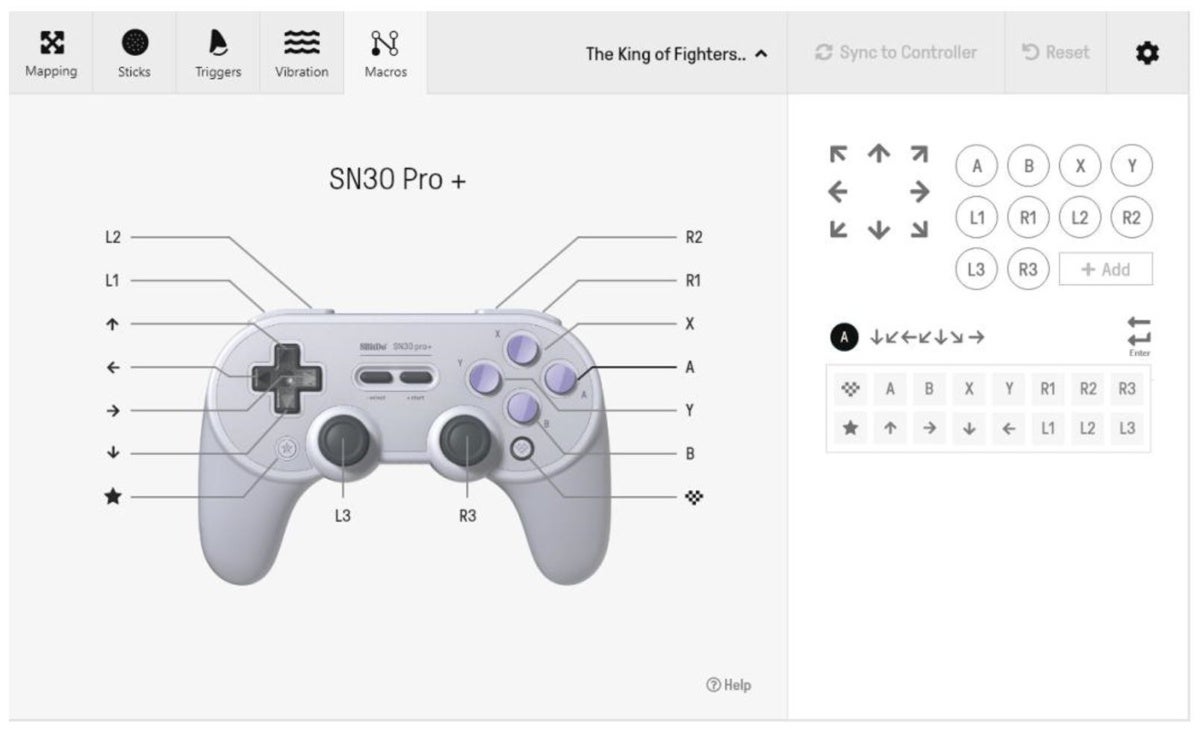 After any change you make inside the Ultimate Software, you need to sync it to the controller before it takes effect. You also need to quit out of the software for it to mount back into a usable state on the PC, meaning you can’t have the application open during your gaming session to tweak settings on the fly.

8BitDo’s first full-sized controller stands with the Xbox One and DualShock 4 as a great option to use on the PC. It offers a similar build quality and reliable functions compared to the bigger players in the space, but it’s the Ultimate Software experience that sets it apart. 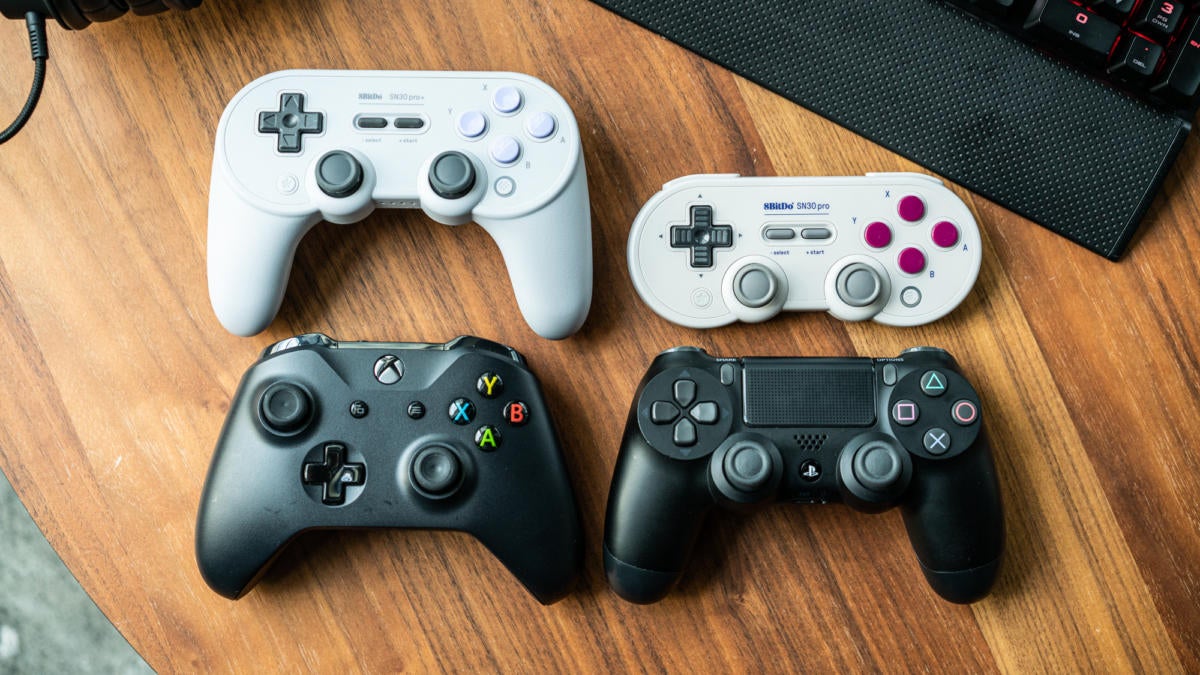 Choosing between the SN30 Pro+ and the Xbox One controller comes down the preference of size and layout of the buttons. But I would easily take the SN30 Pro+ over a DualShock 4 on PC if you prefer the side-by-side stick layout. A laptop gamer still might gravitate toward the more portable offering of the SN30 Pro, which is a great option due to its size and full functionality.

8BitDo took a while to release the SN30 Pro+ after announcing it at E3 2018, but having the Ultimate Software tool made this controller worth the wait. The hardware design continues to impress, and the inclusion of a removable, rechargeable battery is the perfect way to distinguish itself further from the other controller options. Whether playing modern games or emulating the classics, the SN30 Pro+ comes highly recommended. 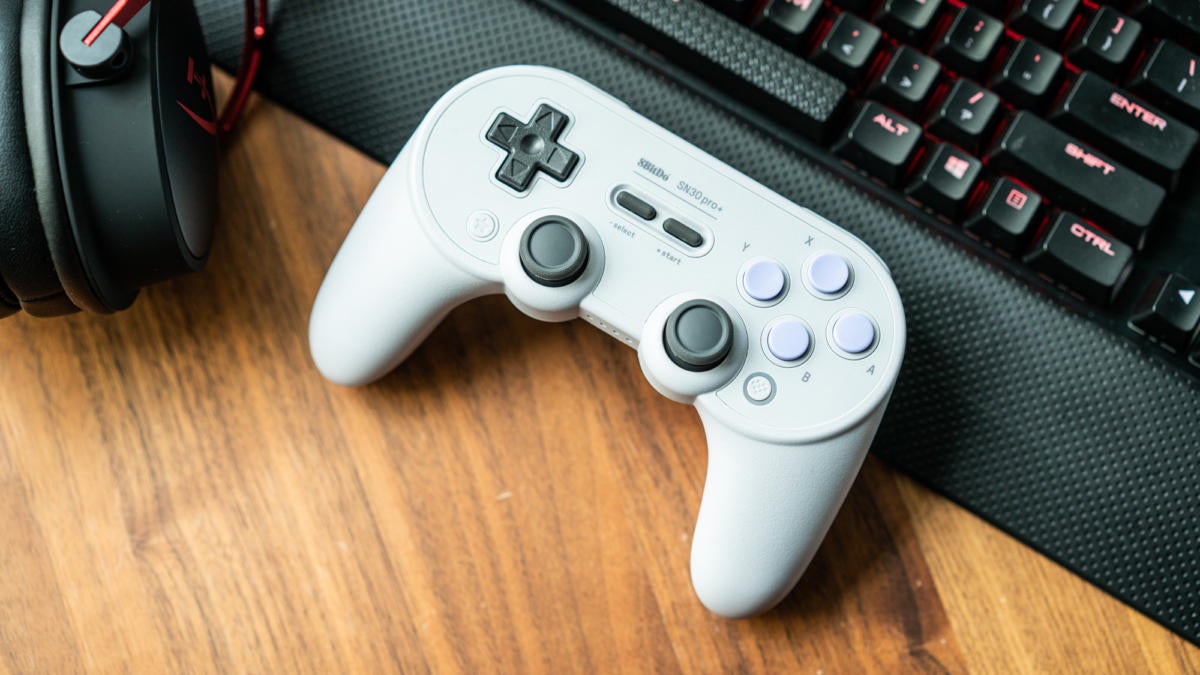