There’s danger around every corner in A Plague Tale: Requiem. From the rats to armed guards, Amicia and Hugo de Rune must keep their wits about them if they’re going to survive 14th century France. While it’s entirely optional to engage in combat with them, sometimes violence is the answer.

Fighting guards should be your last resort, as engaging in combat could alert other guards, but knowing how to take them down is essential in helping you stay alive through the game. As you make your way through the game, you’ll unlock new ways to kill them. We analyze all the possible ways for you to kill guards in A Plague Tale: Requiem. 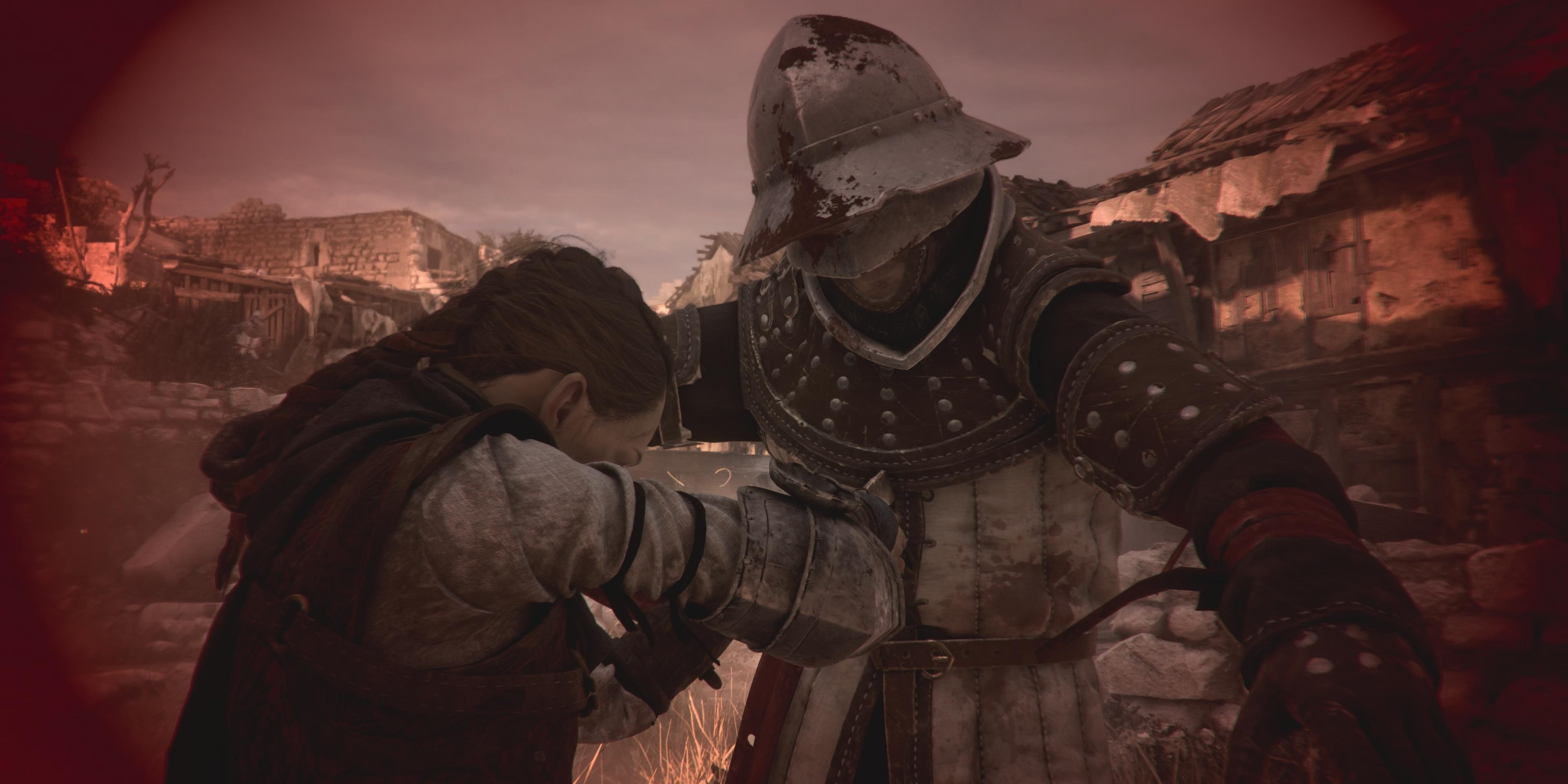 Using a knife is a quick and permanent way of getting rid of a guard. Amicia can only hold one knife at a time until you fully upgrade the Gear category, but it's very easy to kill a guard with a knife.

If you sneak behind a guard, you can use the knife to stab them, but it will create noise and possibly alert other guards. If you don't have a knife, you can still strangle a guard if you sneak behind them. Unlocking Vital Points allows Amicia to strangle enemies with her sling faster and more quietly.

If a guard manages to attack Amicia, the game will slow down and allow you to stab them. The Armour Piercer ability lets Amicia backstab armoured guards, killing the more difficult enemies with ease. While it’s easy to use a knife, try your best to avoid it. There are several locked workbenches in the game that are only opened using a knife. These contain plenty of alchemical resources, Pieces, and Tools. 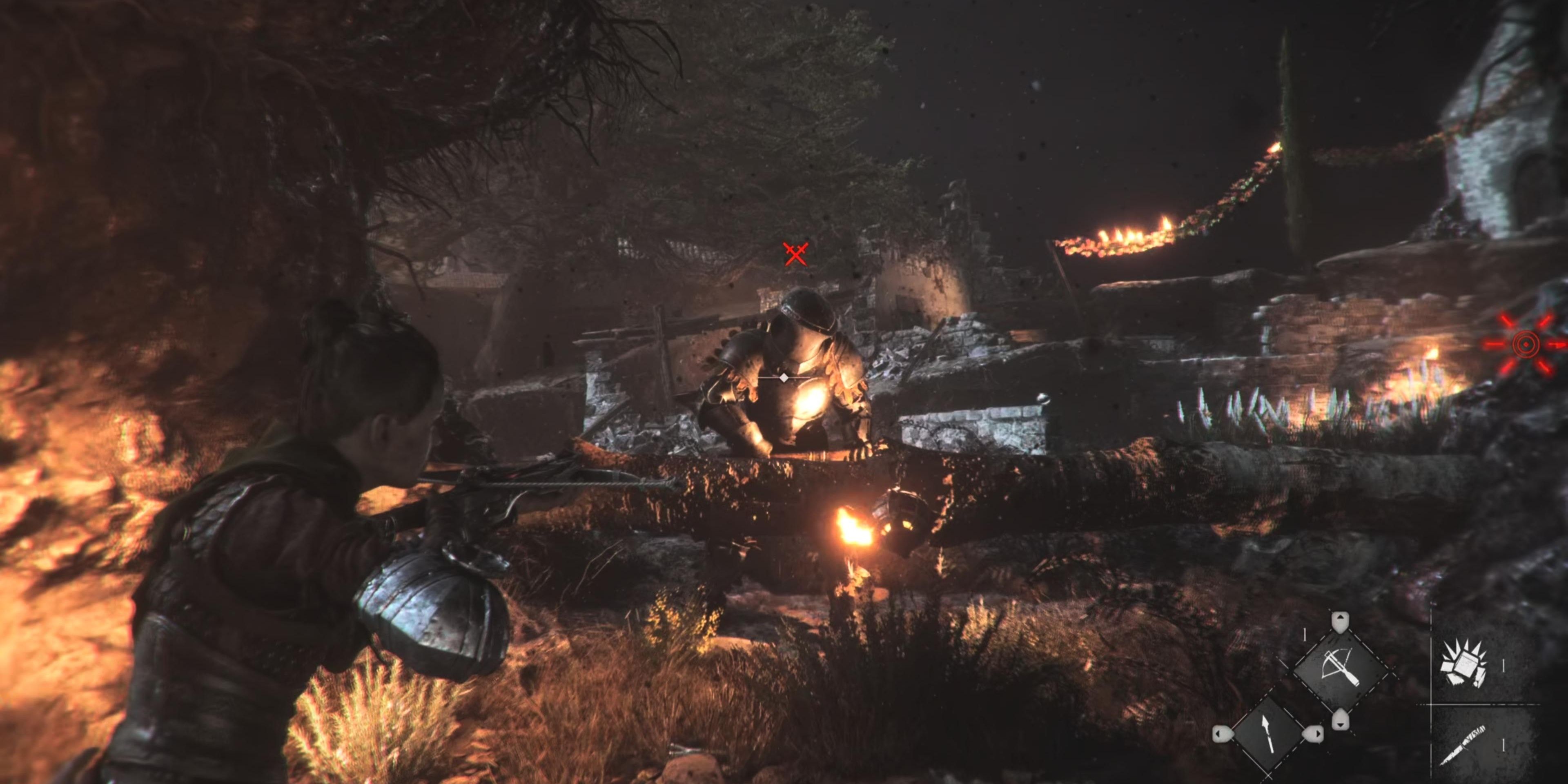 Amicia starts the game with her trusty Sling, which can be used for more than just breaking latches. Guards without helmets and archers can be killed instantly with a shot from her Sling. Shooting helmeted soldiers will only stun them and that's when it's time to use the Crossbow.

Acquired in Chapter Five, In Our Wake, the Crossbow is a deadly weapon against most foes. Other than the fully armored soldiers, the Crossbow bolt can kill any guard instantly. Bolts are scarce to come by, and are needed to get through certain infested areas, so use them sparingly.

Snuff Out The Flames 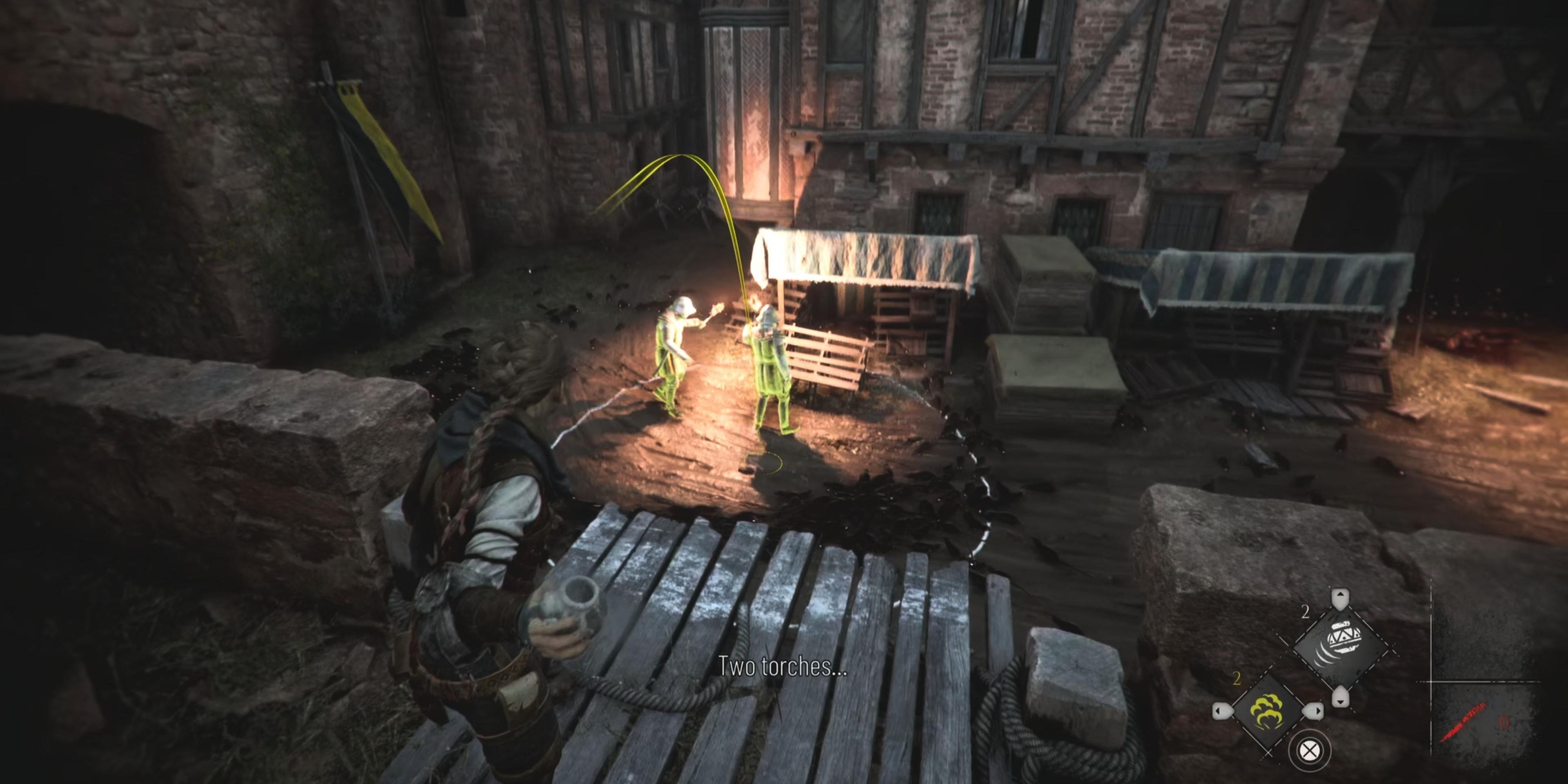 Throughout the game, you’ll unlock companion abilities based on who Amicia is paired with. In Chapter Three, A Burden of Blood, Lucas shows his ability, Stupefacio. You can target flames and Lucas will throw his concoction to snuff them out.

His ability is the same as crafting Estinguis. This alchemical ammunition costs one Saltpeter and one Sulphur to craft, and allows Amicia to extinguish flames herself. Smothering their flames and eliminating their defenses will let the rats scurry in and consume the guards. 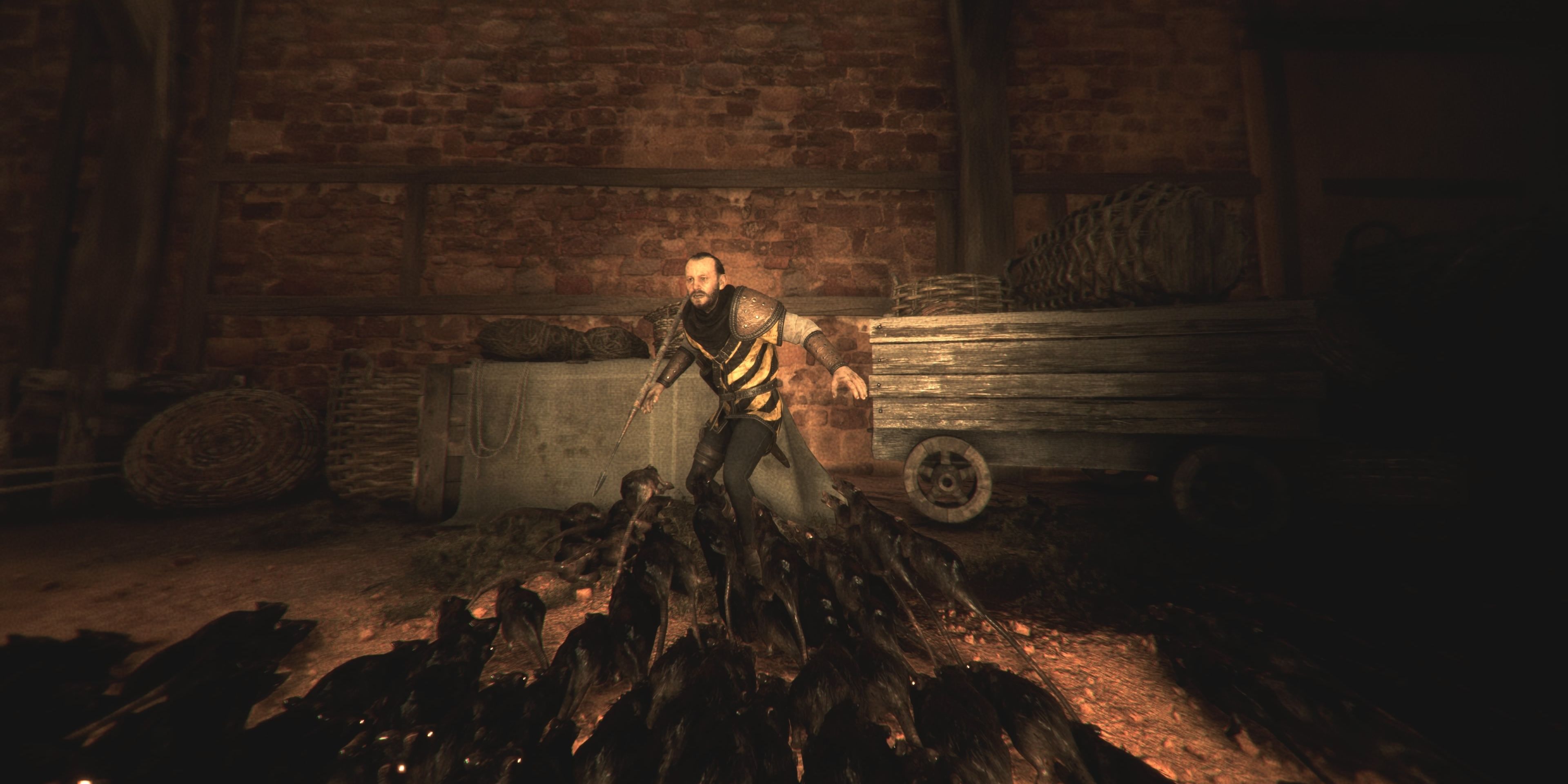 In Chapter Six, Leaving All Behind, Hugo unlocks more of his powers by connecting with the rats. First, the boy can use the vibrations in the ground to locate the whereabouts of guards with Echo. This is a nifty ability to scout the surrounding area, and won’t alert the guards to your location.

The more aggressive of Hugo’s rodent abilities is Imperium. Hugo can control the rats and seek the soldiers himself. Areas of red light won’t allow you to pass, so stick to the darkness. Typically, the rats will stay focused on the soldier’s corpse, allowing you to safely pass.

Arnaud On The Attack 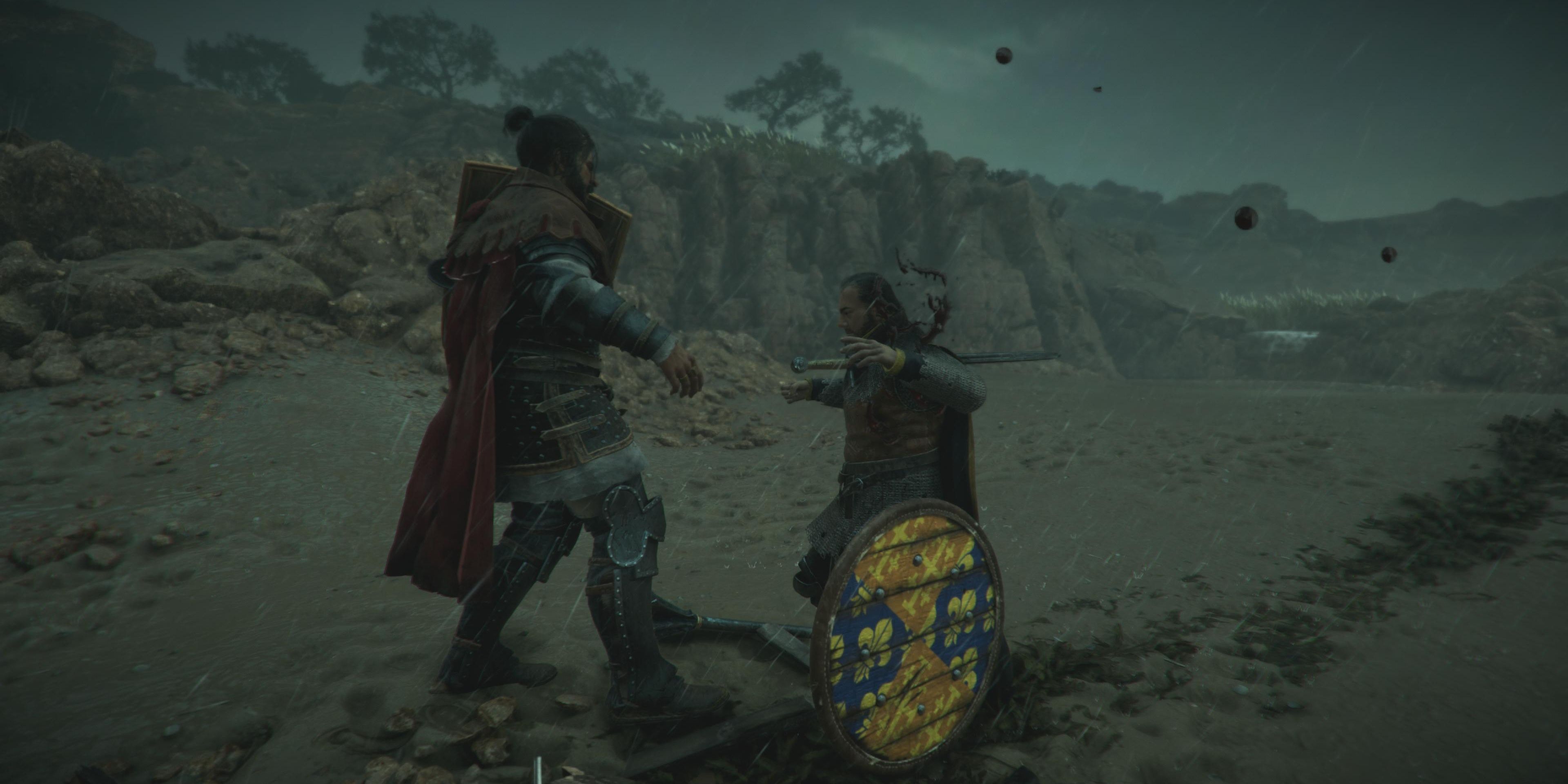 In an unlikely turn of events, Arnaud agrees to help Amicia and Hugo find his mysterious island, and that means you can use the knight’s ability to fight guards. Near the end of Chapter Seven, Felons, Amicia can send Arnaud to a guard and the knight will kill them.

Arnaud always wins in one-on-one fights no matter what type of soldier he’s fighting, but can be overwhelmed by multiple foes and require assistance.

When using Arnaud, it’s best to be prepared to take out any approaching guards who might have been alerted by the noise. With the Grappler ability, Amicia can push enemies into fires or rats that kill them instantly. 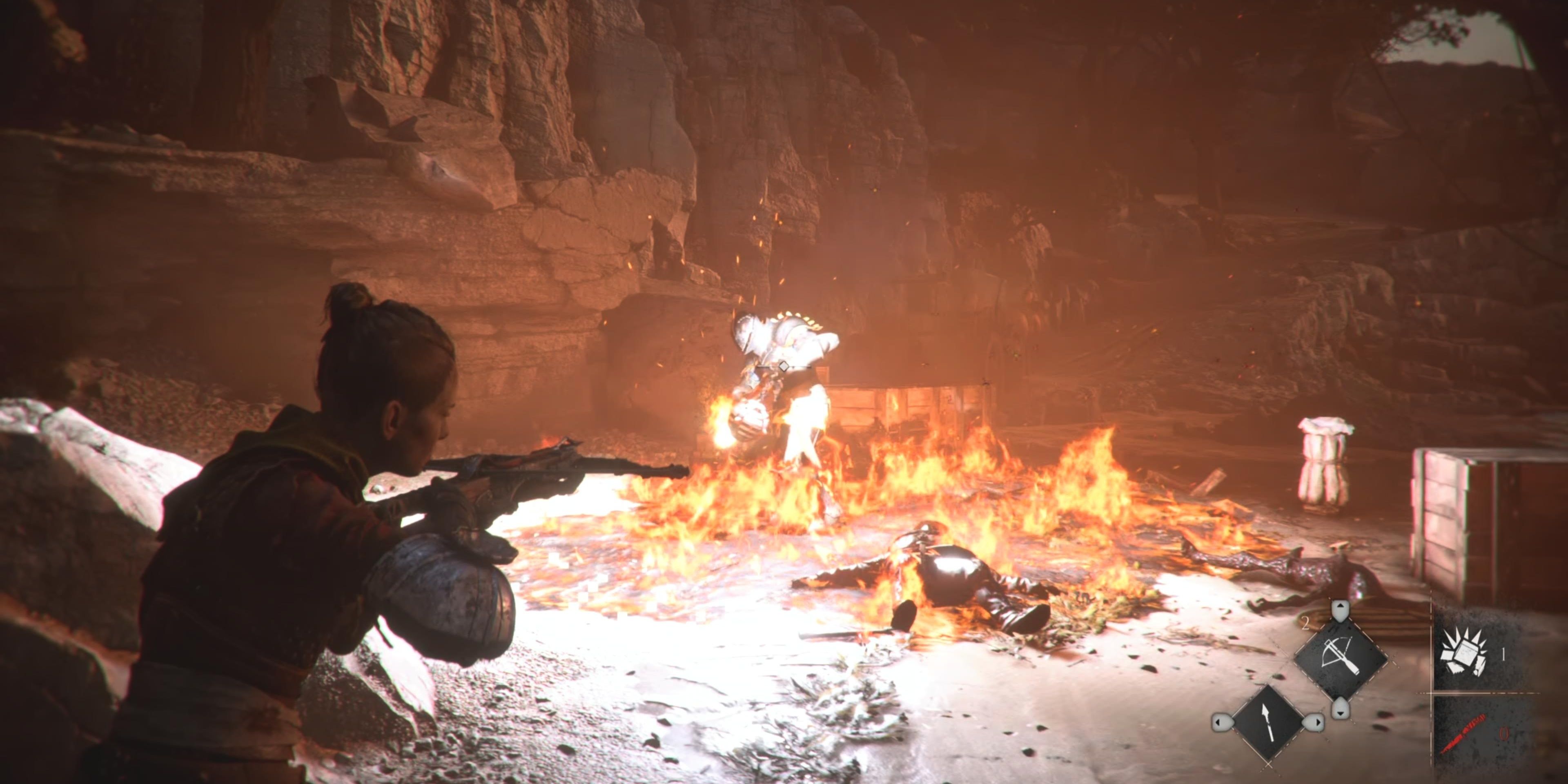 Mixing Tar and Ignifer isn’t just effective against rats. This combination can inflict a deadly number on most guards. There is an assortment of ways to use these alchemical compounds. The easiest is simply throwing a pot of Tar and igniting it with a shot of Ignifer.

If you don’t have any pots, then it’s time to be creative. Always be on the lookout for jars of Tar that are scattered throughout the game. Shooting these will spill a pool of Tar on the ground, and you can ignite the area. The heavily armored soldiers have flaming maces, and you can shoot them with Tar to stun them, allowing you to pick off their armor.