Surviving during fourteenth-century France sounds hard enough as is, but imagine trying to control a deadly disease that’s slowly consuming you. Well, that’s the life of Hugo de Rune as he and his sister, Amicia, look to cure the Macula in his blood in A Plague Tale: Requiem.

After defeating Nicholas and the Inquisition, the children thought they were safe, but the Order now targets the boy and wants to imprison him. Now, Amicia and Hugo are once again on the run looking for any way they can live a normal life. Follow this guide to help you through the eleventh chapter of the game, The Cradle of Centuries. 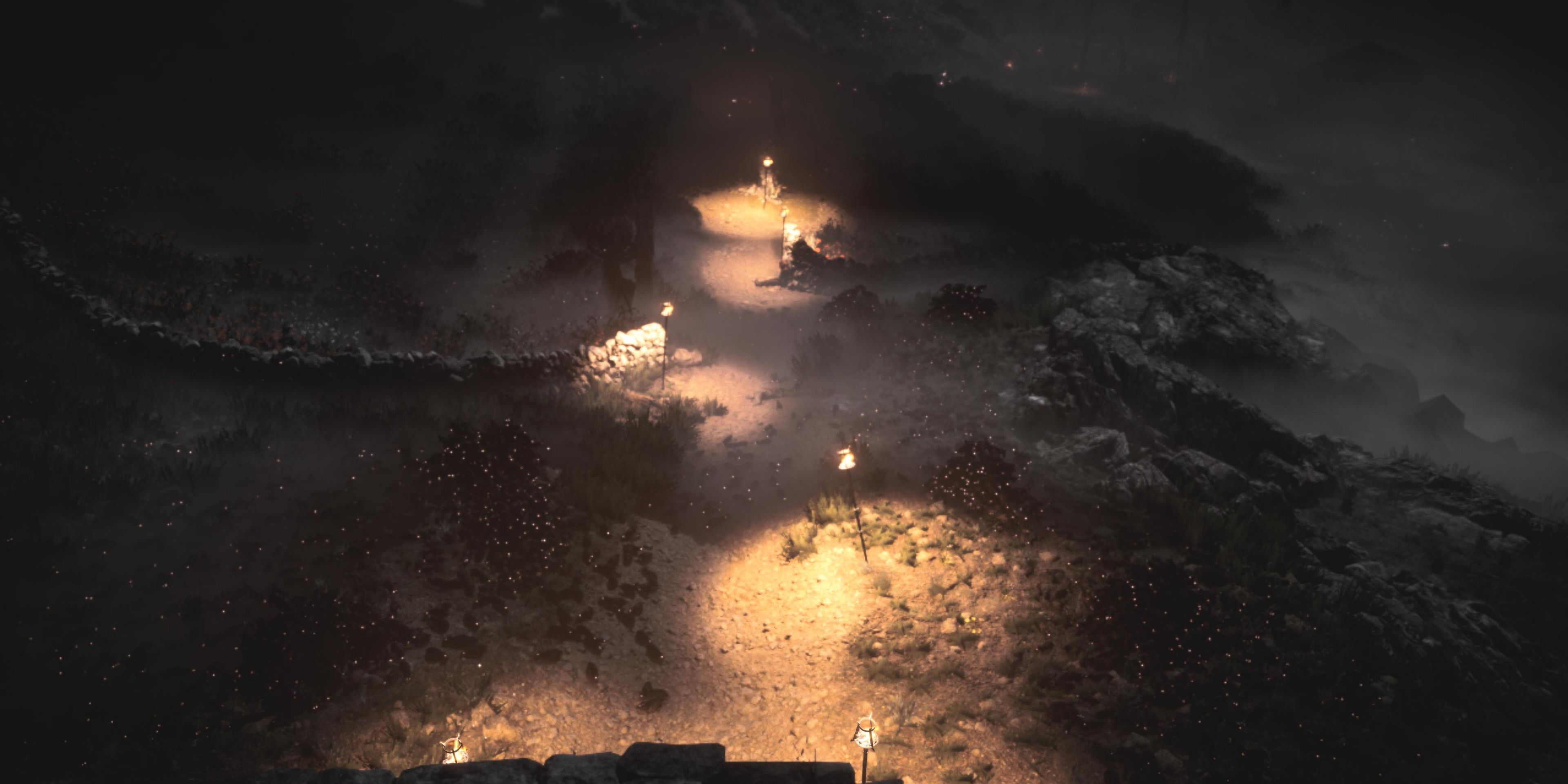 After escaping Milo and the slavers, Amicia, Hugo, and Sophia return to the main island but find it’s overrun with rats. Use Sophia’s prism to move through the rats from torch to torch.

When you reach the last torch, use Ignifer to light the torch that’s further down the path. Continue to use Refract on the torches to keep moving through the rats along the path.

You can quickly switch between which torches Sophia is using Refract so you aren’t caught in the middle of rats. 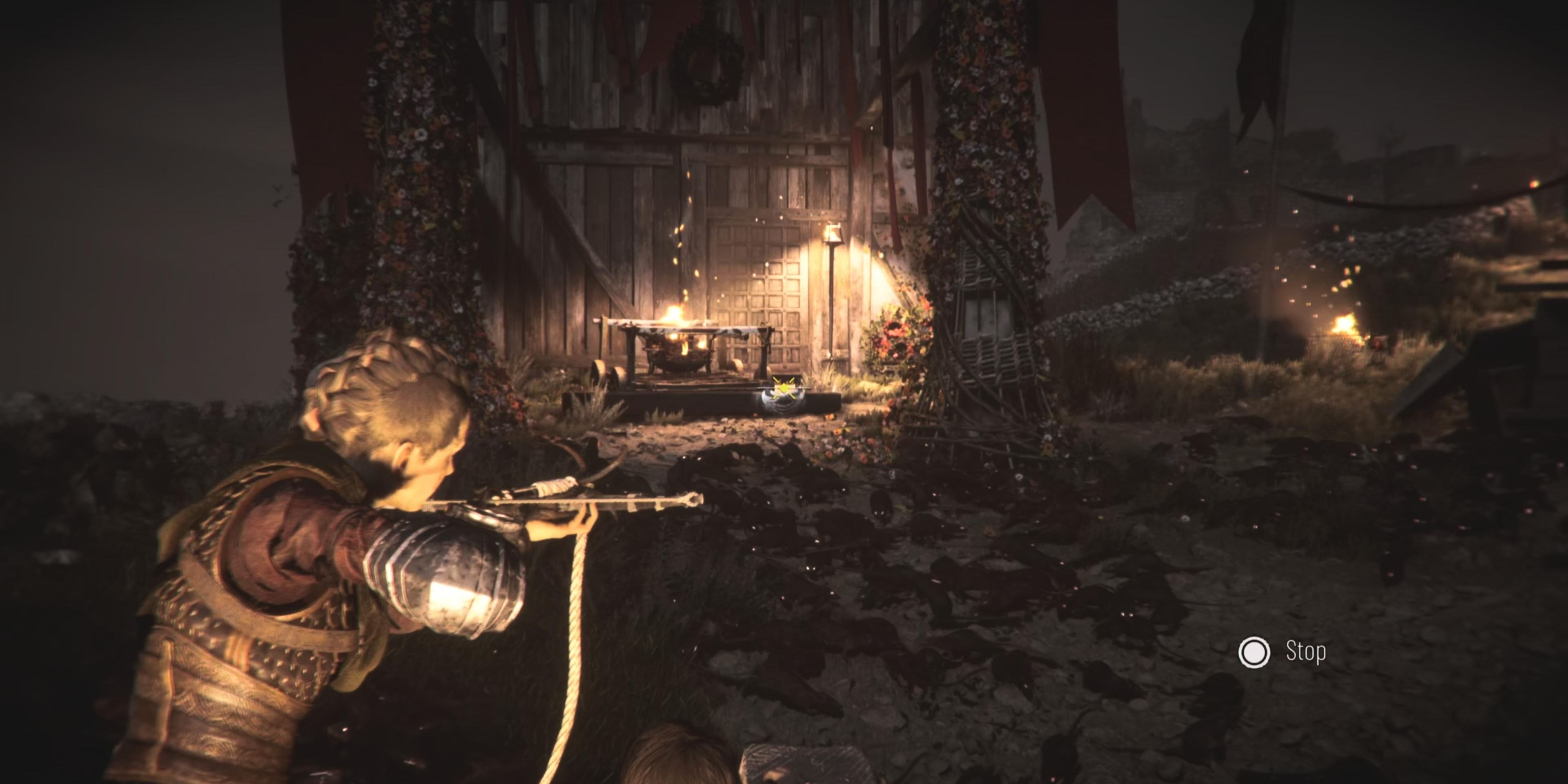 Turn the corner to open the chest for Pieces, Sulphur, and Alcohol, then light the temporary brazier to clear the rats and run up to the next torch. Open the crate near the torch to find Alcohol and Resin, then light the next torch with Ignifer and continue to utilize Refract to head down the path through the rats. Once you reach the last torch, more rats rise up from the ground and snuff out the surrounding braziers. Use Refract to head to the lastly-lit brazier and open the chest for Pieces, Sulphur, and Resin, and grab the bolt next to it.

After stocking up at the torched area, walk to the right and you’ll find a cart with a lit brazier in it. There will be a block of wood stopping you from pushing the cart, so shoot an Ignifer bolt into the wood panel down the path and use Sophia’s prism to reach the area.

Now, use the anchor point to attach the rope to the wood block in front of the cart. After you pull the block away, the cart will begin to head down the hill with a lot of speed, so you’ll need to quickly run with the cart to avoid being left in the dark. 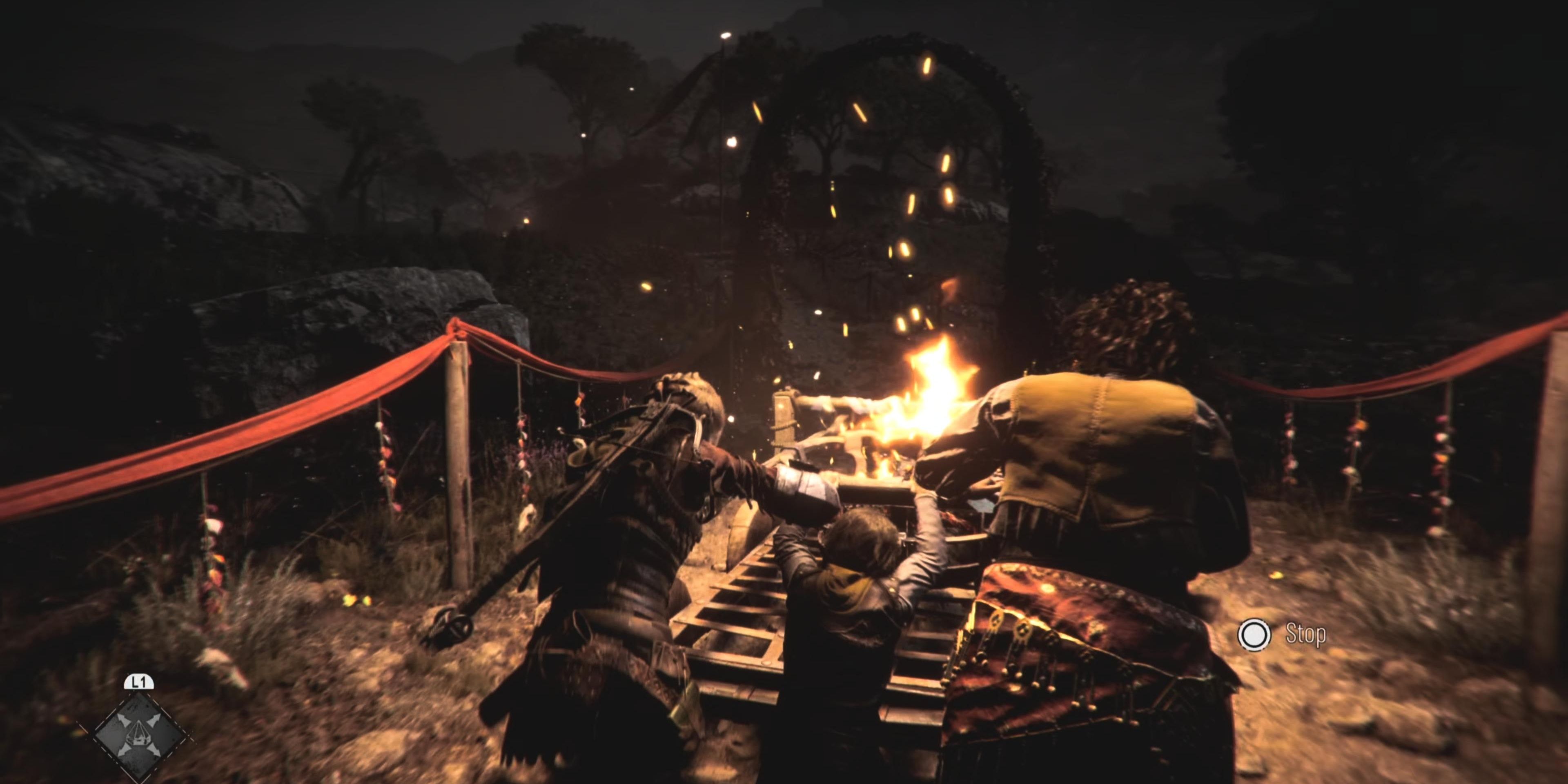 With the cart free, make your way under the archways through the rats. When you reach the end, light the temporary brazier to clear the rats and move up to the next torched area. There will be a crate next to the torch with Alcohol, Sulphur, and a bolt, then light the next torch. Keep using Refract to keep moving through the horde of rats from torch to torch. The pathway will bring you back to the ruins where you originally found the mural under the tall grass in chapter nine. Without dropping from the ledge, walk around the left side and interact with the pillar in the center so Amicia and Sophia can push it down to break the ground. 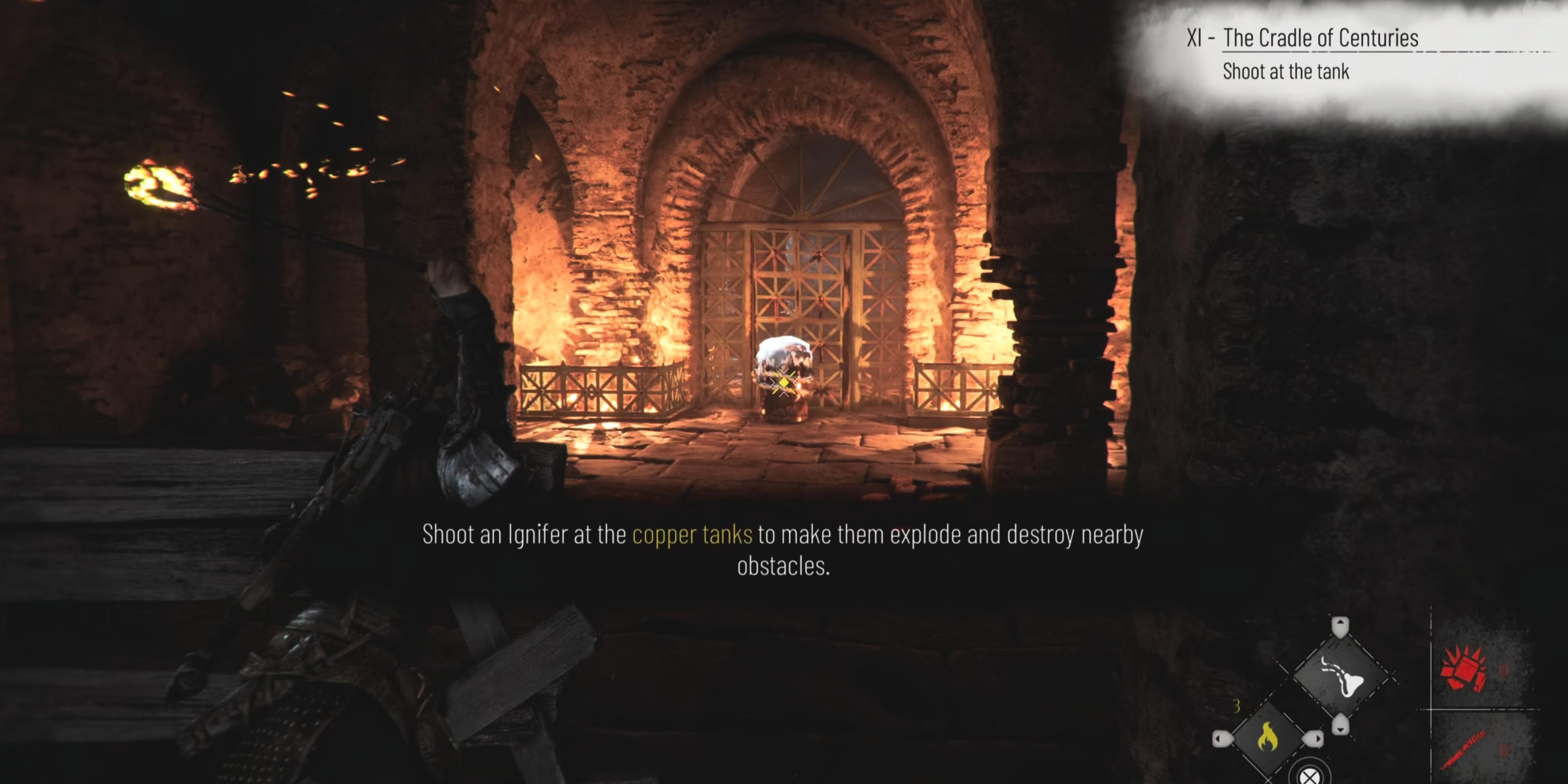 After dropping down into the newly created opening, make your way down the steps, then light the fire pit in the darkness. The fire will spread in a straight line and light up other areas in the room. Follow the path and you’ll come across the Order symbol in the ground.

Open the chest in the area to find Alcohol, Sulphur, and Pieces. Head through the blasted door and turn right down the narrow passage. Then you have to drop from the ledge and continue heading into the cave. After dropping down another ledge, keep heading straight until you reach a gate. To the right will be a crate with Alcohol and Sulphur, then investigate the gate.

Unfortunately, the gate is stuck but Sophia notices the copper barrel is filled with Greek fire, which can be used to create explosions. Shoot the barrel with an Ignifer projectile and the gateway with blast open. Go through the doorway and use the workbench in the room to upgrade your equipment. Search the area to find a bolt and a chest with Alcohol, Sulphur, and Saltpeter. There’s another barrel of Greek fire behind some pieces of wood in the right corner of the room. Shoot the barrel and crawl through the hole to find a European Goldfinch feather to add to Hugo’s collection. 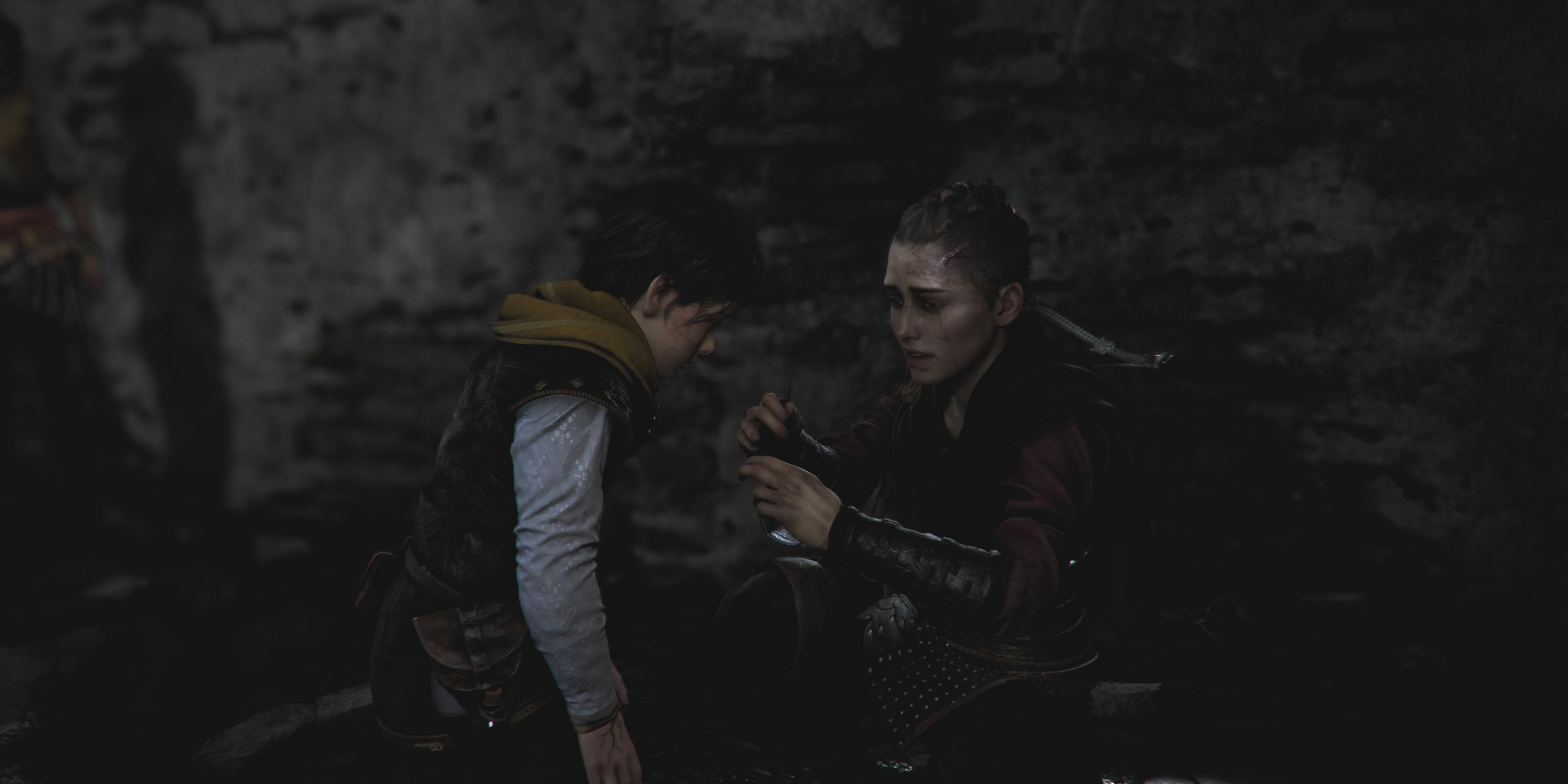 Once you find the feather, exit the room and crawl through the hole to the left of the workbench. Make your way around the path and aim your Sling through the opening in the wall to shoot another barrel of Greek fire to pry open the busted door. Head back down and go through the doorway, picking up the Pieces on the left.

Before following the trail of fire upward to a gate, pick up the knife from the skeleton on your right. When you reach the gate, crawl through the hole on the right and search the crate in the back for Alcohol and Sulphur. Tell Sophia to operate the crank on the wall so the wagon with the Greek fire travels down the slope and destroys the wall. 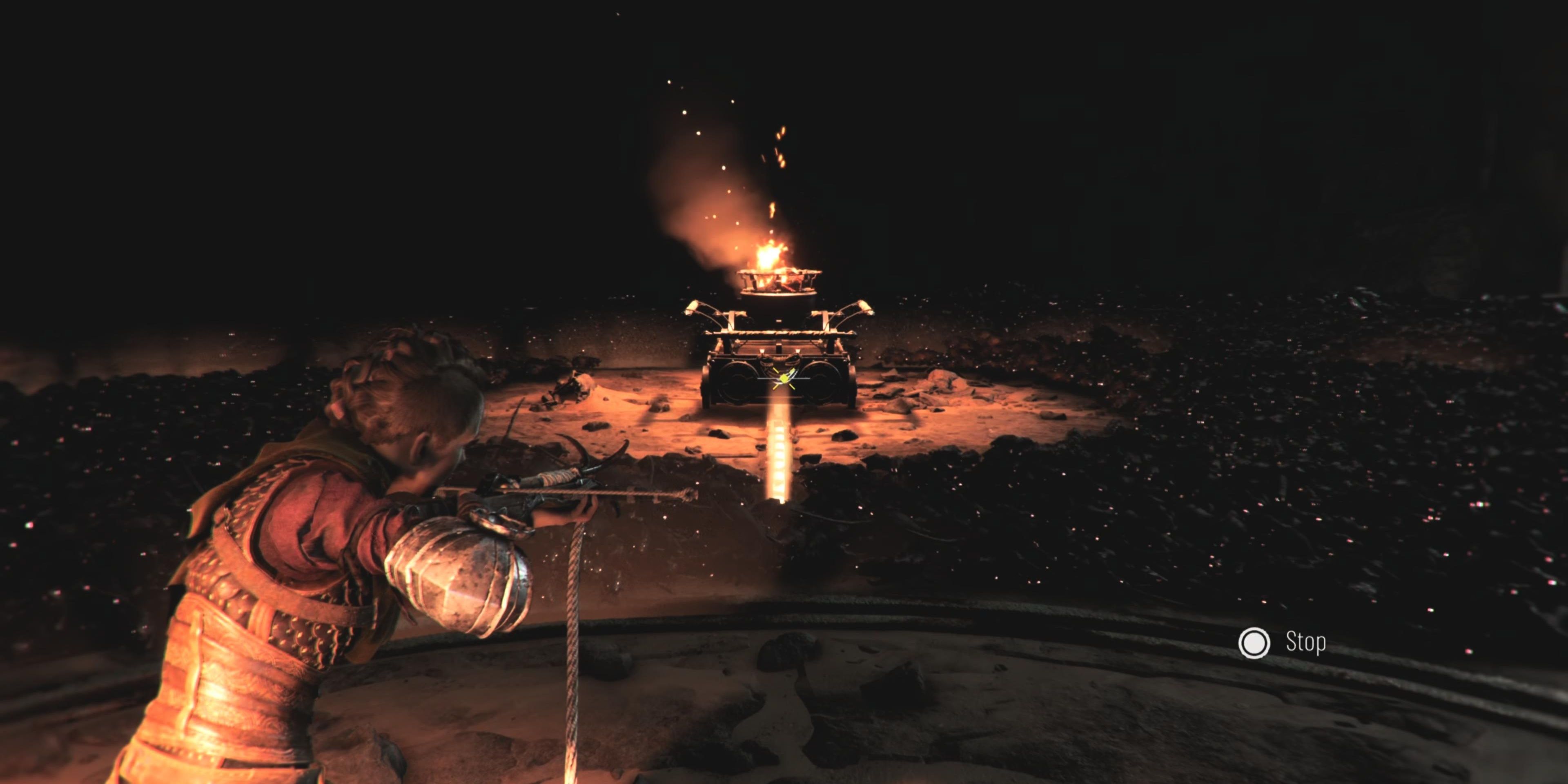 You’ll enter a massive chamber with a few fire pits scattered across the room. When you head down the steps, the rats will emerge from underground. Quickly light the nearest fire pit to keep the rats at bay. The fire will leak toward the other fire pits, lighting them as well. Use the anchor point to attach ropes to each of the fire pits surrounding you to pull them toward you. Go to the nearest brazier on your right and open the crate for Resin and Sulphur. Then, push the brazier back up the rail and continue pushing it down the left side. 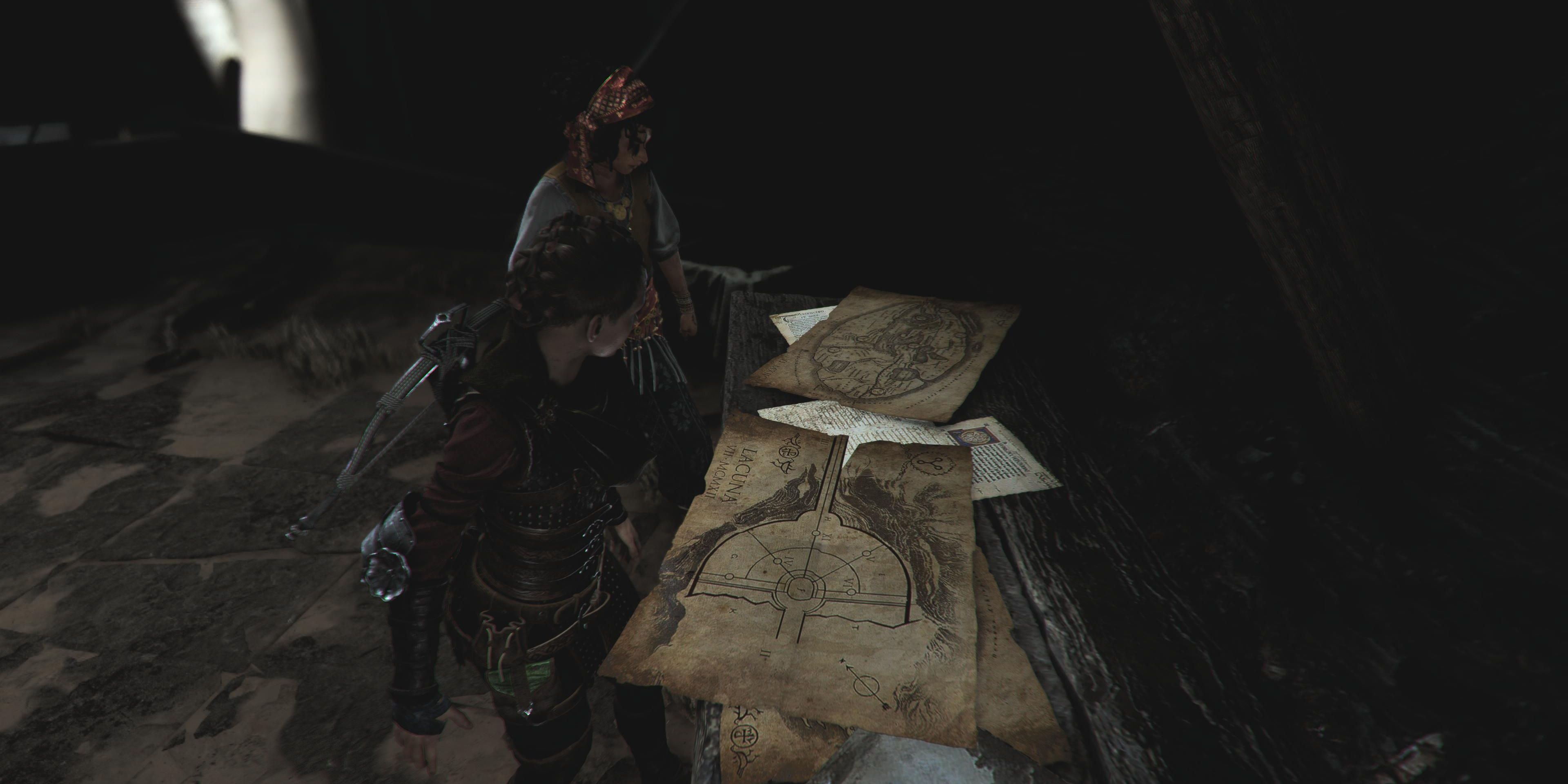 There will be a rock blocking the rest of the rail, but if you push the brazier upward you can access a chest with Pieces, Sulphur, and a Pyrite. If you drop down from the ledge next to the chest, you'll find another crate with Resin and Alcohol and the Chateau d’Ombrage souvenir on the table. You have to climb up the ledge to get back to the cart, but the rats might attack, so use a Pyrite to clear a path and Ignifer pots to help Sophia. 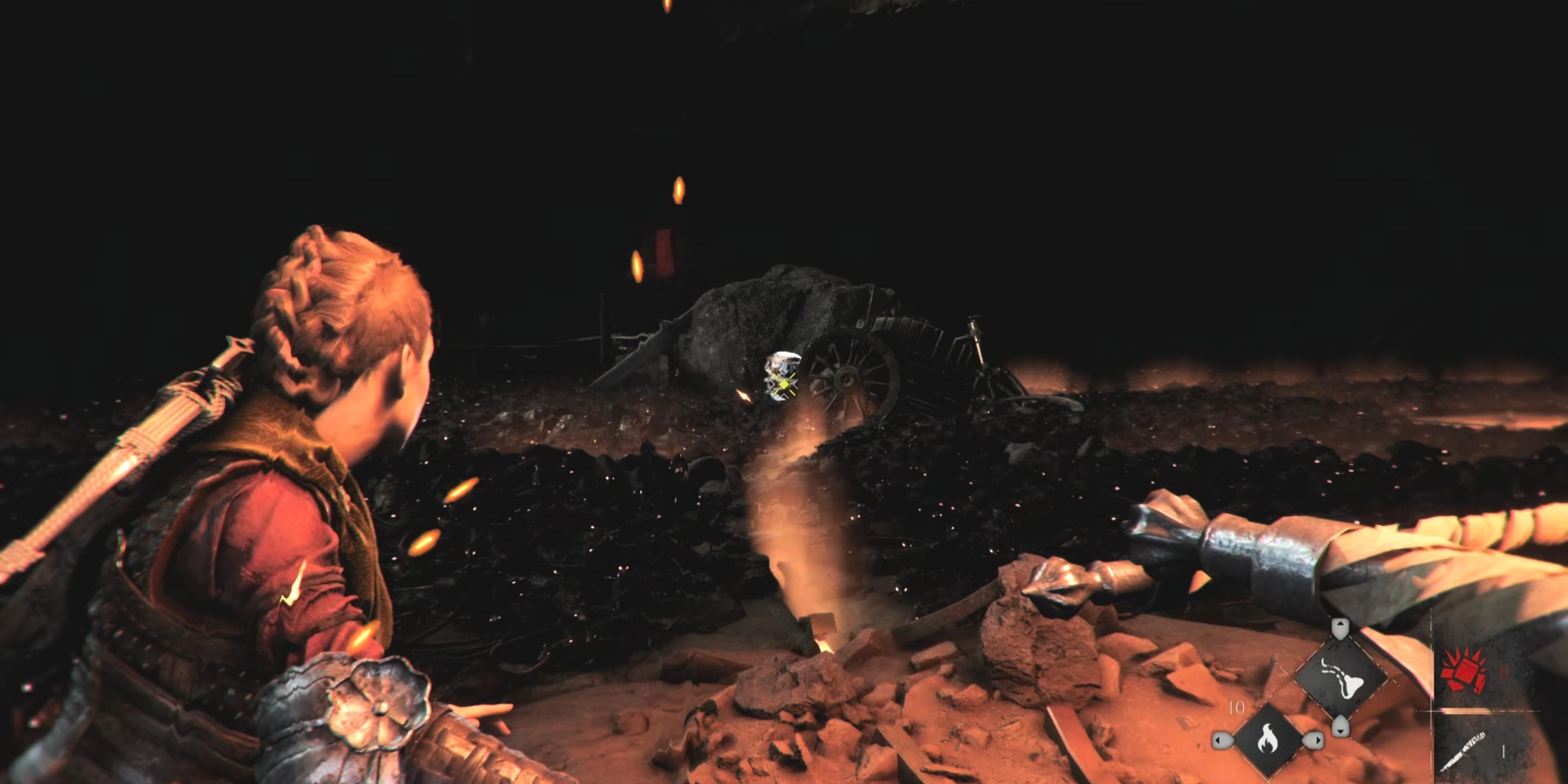 Unable to move forward, push the cart back toward the center platform, then push the left nearest cart down the rail. However, this rail will be broken also, so you'll need to use Sophia's prism to pass through the rats and reach the cart on the far left. By pushing the cart up ahead, you'll find a chest with Resin and Alcohol. Bring the cart back to the connecting rail and continue pushing it toward the middle. Shoot the barrel of Greek fire behind the wagon to unblock the other rail.

Return to the first cart you used when you found the souvenir and push it down the rail that was previously blocked. Once you’re on the center rail, just push it forward to reach the pathway.

Into the Depths Below 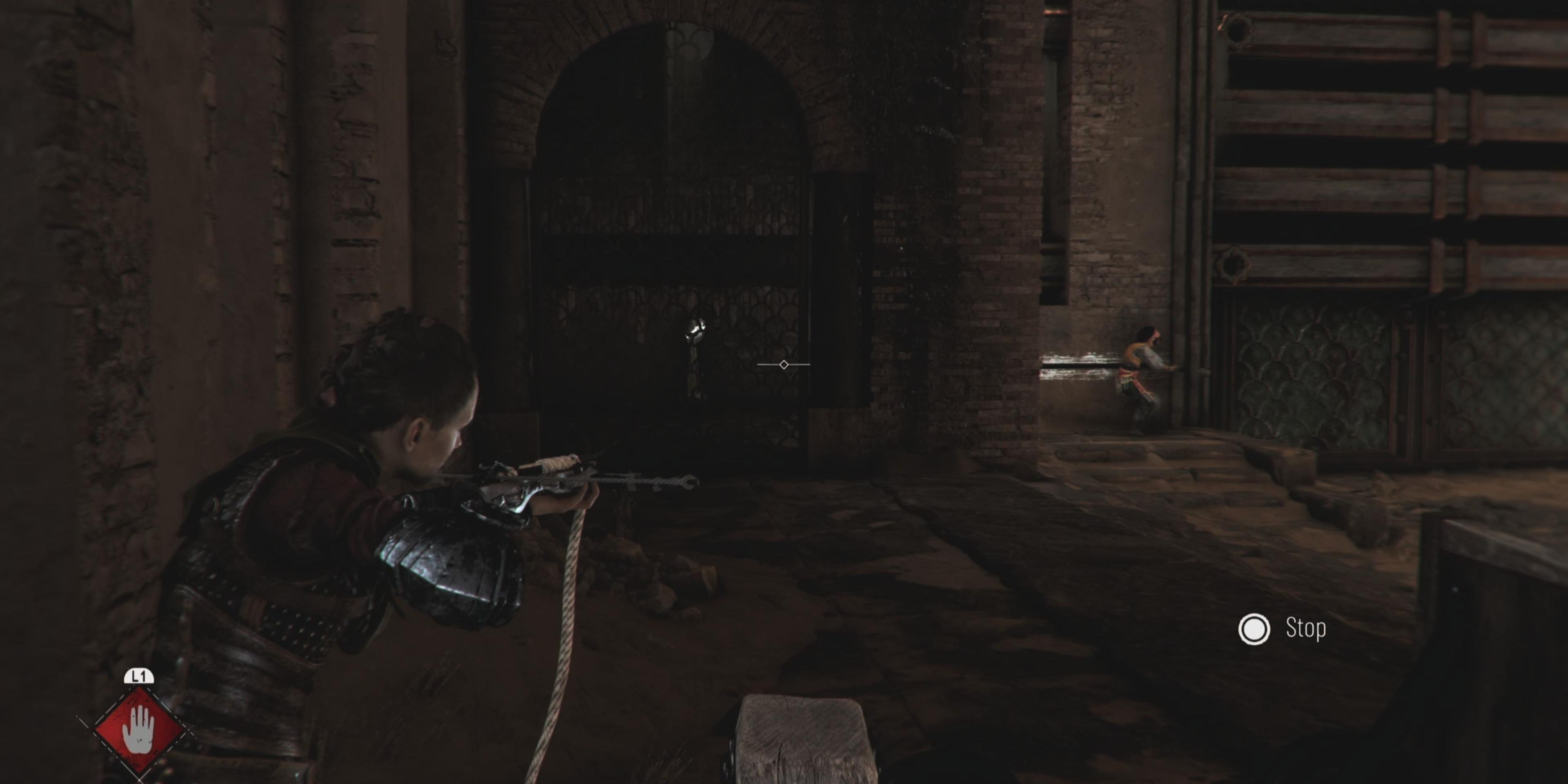 Once you reach the end of the pathway, open the door to trigger a cutscene. After the cutscene, you’ll need to figure out how to open the door. The levers on each side can unlock the barriers but they must be activated in a certain way. First, head to the back area of the room on the left and tell Sophia to use the crank to pull the cart with the anchor point out. Next, tell Sophia to pull the lever on the left side of the door to lift the gate in front of you to shoot the rope to pull the other lever.

There’s a chest in the far back of the room with Sulphur and Alcohol.

Tell Sophia to pull the lever on the right side of the door to remove the lock, then instruct Hugo to pull the last lever so the door remains unlocked. Once Hugo pulls the lever, Amicia and Sophia can turn the center crank to open the door. Light the brazier inside and continue heading down the path until you reach the end with a breakable latch to the left. Shoot the latch to raise another platform but it’ll end in the middle. Amicia tries to climb down but falls to the bottom and must sprint to the ladder to avoid the rats. 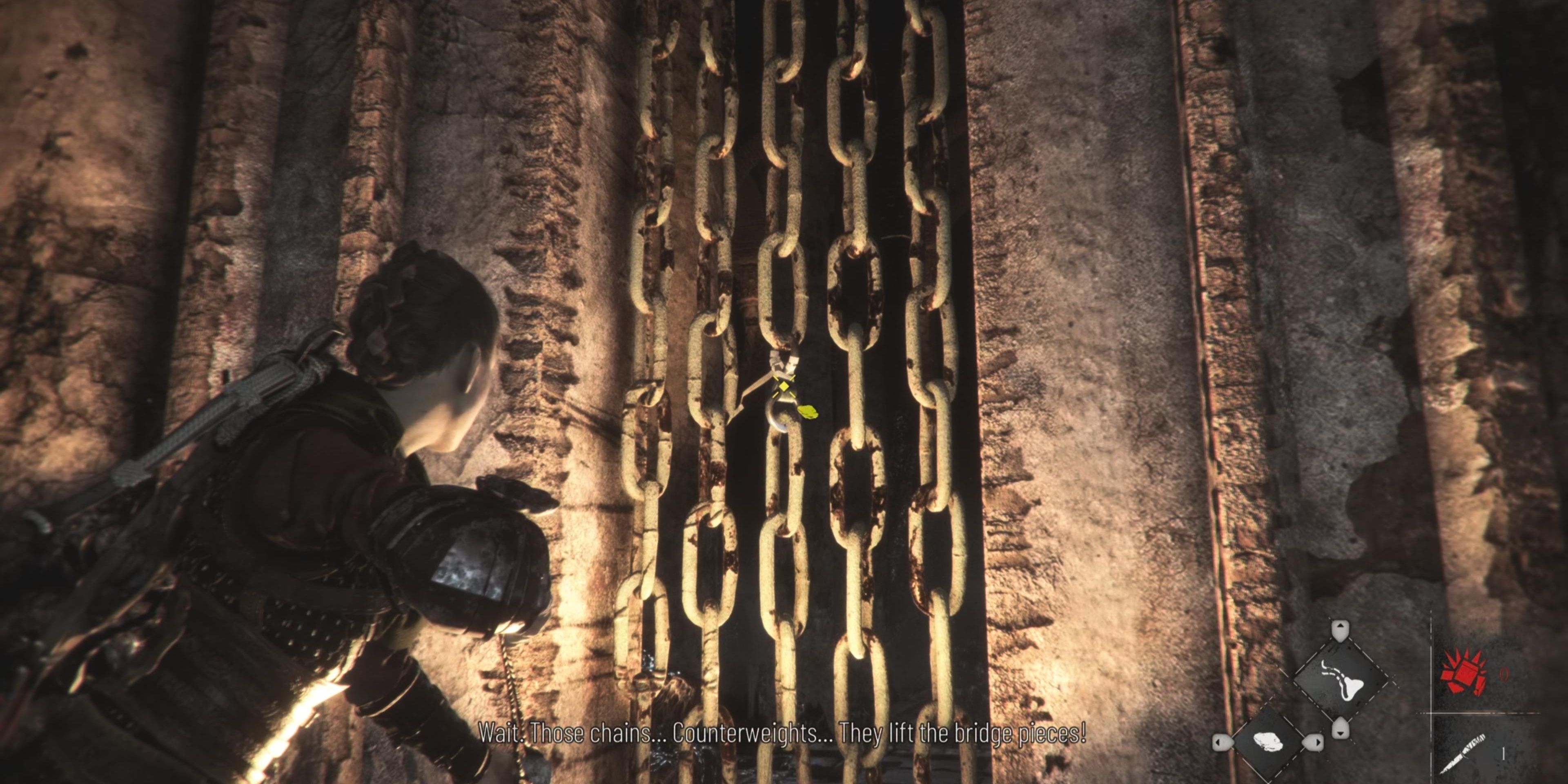 Cut off from Hugo and Sophia, slide through the narrow passage and break the latch on the left chain to adjust the chains. There will be a chest in the far corner with Resin, Alcohol, and Sulphur, then go through the newly created narrow passage. Before jumping from the ledge, light the brazier at the bottom to clear the rats. Fire another Ignifer bolt into the wooden board on the right, then open the crate nearby for Alcohol and Sulphur. Use Odoris to distract the rats so you can run to the lit board, but before you grab a stick, continue lighting the next boards and the brazier down the path.

Locked workbenches require a knife to access but have plenty of alchemical resources, bolts, and Pieces as a reward. 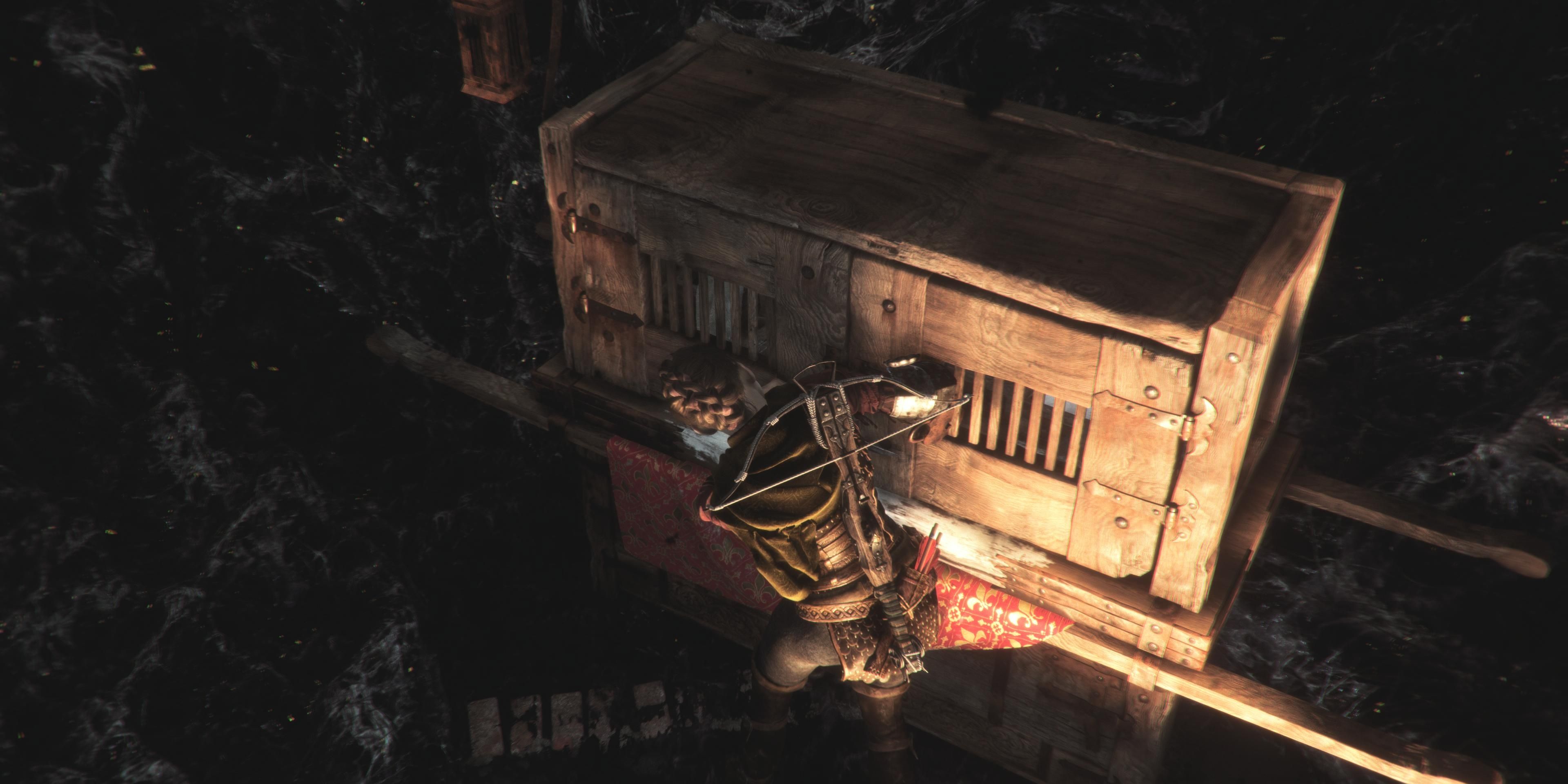 With everything lit, now grab a stick and light it on the last wooden board so you can safely walk through the rats to reach the brazier. Open the chest next to the brazier to find Sulphur, Saltpeter, and Alcohol, then climb the ledges to find another chest with more alchemical resources. Break the latch and pass through the new opening and light the brazier in the cart below. Before you drop from the ledge, walk down the platform and go through the chains to find a locked workbench.

After using the workbench, head back through the chains and drop from the ledge. The lit brazier in the cart allows you to make your way through the rats. There's a bolt along the path to pick up, then climb the ledge at the end of the path. Fire an Ignifer bolt into the nearest box on the right to clear the rats, then light the brazier on the left. Use the anchor point to shoot the barrel of Greek fire that Sophia pushed down the hill, then fire an Ignifer to blow up the blockage in the path.

Return to the cart and continue making your way through the rats. There’s a chest to the left with Pieces, a Tool, and Saltpeter but you’ll need to use an Ignifer pot to clear the rats. Climb the ladder to be reunited with Hugo and Sophia, then run down the left and climb the ladder at the end of the path. Head down the dark path until you reach the inner tower and a cutscene will trigger after you reach the bottom of the steps.

Run For Your Lives 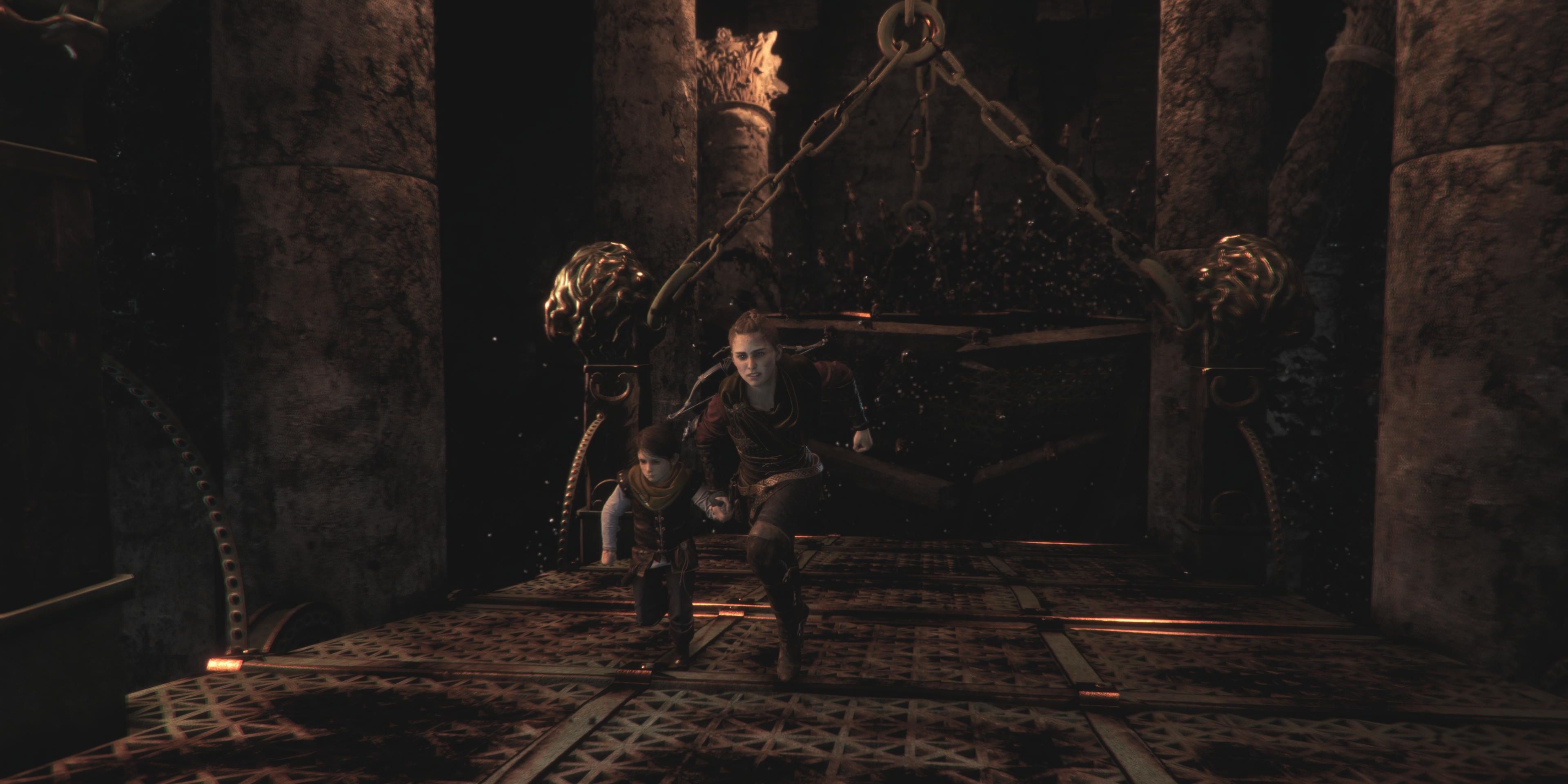 Keep following Sophia to the right but be careful with the rats bursting from the ground below. There will be another ledge to climb and the angle will shift with Amicia running toward the screen, so be prepared to adjust how you’re running. Continue running across the platforms and when you climb the next ledge, the angle will shift back to normal. Keep heading through the cave tunnel to arrive back outside, trigging another cutscene and ending the chapter.