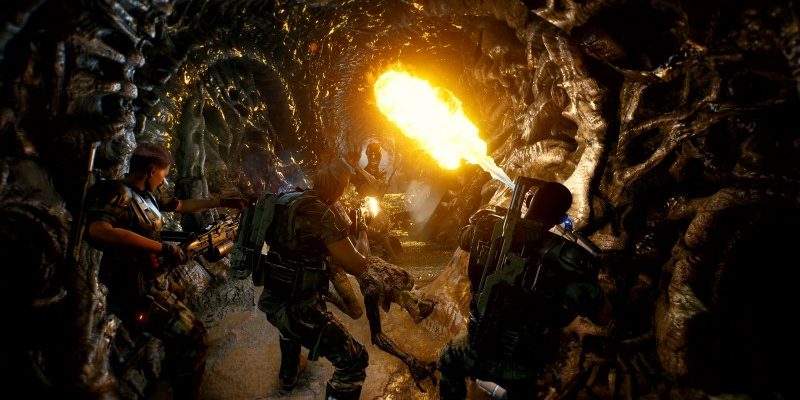 The game formerly known as just Aliens: Fireteam has been rebranded to Aliens: Fireteam Elite and it’s coming in August. We first learned about the game back in March, and it’s a co-op bug hunt that, as its title implies, draws heavy inspiration from Xenomorph-laden action of Aliens.

On August 24, you and up to two other friends (or AI teammates) can suit up as marines to take on the universe’s greatest hunters in a new adventure set 23 years after the original film trilogy. The story unfolds over four separate campaigns with three missions each. Similar to games like Left 4 Dead, you’ll fend off waves of Xenomorphs with each player taking on one of five specialized classes (gunner, demolisher, recon, technician, and doc). Marines can be customized further with various weapon perks and cosmetics. Concocting the right combination of skills and classes is vital to successfully combat Fireteam Elite’s 11 different Xenomorph types and 20 enemy types overall. Check out the new gameplay trailer below.

Although developer Cold Iron Studios designing Fireteam Elite with replayability in mind, it is not a live service game. Rather, players can use a range of modifier cards to dramatically alter the rules of engagement, such as making it so that only headshots can damage enemies. Playing under these special conditions will net bigger rewards upon completion, giving players a reason to repeatedly take on the hive while keeping the action fresh.

If you love slaughtering waves of enemies alongside some good buddies, there’s quite a few games on the horizon to look out for. Be sure to keep an eye on Left 4 Dead spiritual successor Back 4 Blood, Arkane Studios’ newly announced vampire action game, Redfall, and the PvE focused Rainbow Six Extraction.

Will you be checking out Aliens: Fireteam Elite? Sound off in the comments below!