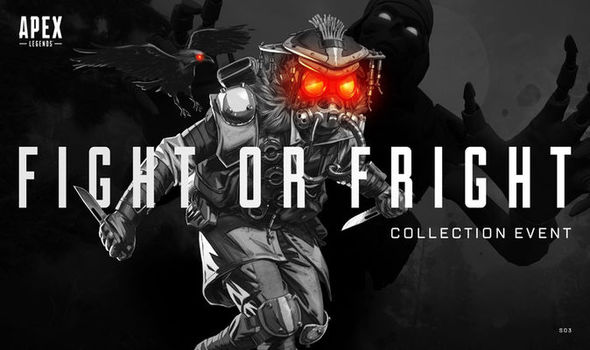 A new Apex Legends Halloween update is being released this week on PS4 and Xbox One.

Developers Respawn Entertainment have already shared much of their plans for the new Halloween Event, which is now very close to launching.

From what has been shared so far, we know that fans will be able to go back to King’s Canyon, unlock new skins and complete new challenges.

And it’s very possible that there are even more surprises waiting for fans when the next Apex Legends update arrives.

Respawn has confirmed that their new Apex Fight or Fright event is kicking off on Tuesday, October 15.

The new Halloween celebrations will be going live at the same time on each platform but we have not been given the exact timing yet.

From past events, we would expect a new Apex Legends update to arrive before 8pm in the UK, or 3pm EST.

The Apex team may provide more on their plans for the event before it arrives, including a full schedule.

If they don’t fans can expect some kind of update and patch notes to be released soon after the event begins.

Fight or Fright will be available to play for around three-weeks and is categorised as a Collection event.

WHAT IS A COLLECTION EVENT?

Collection Events deliver a limited-time mode and event challenges where players earn cosmetics, and a set of event limited cosmetics.

These are available through Event-specific Apex Packs or direct purchase, and like Themed Events, Collection Events may also feature a town takeover or small map change.

For the Halloween Collection Event, this will include the return of King’s Canyon as part of the new Shadowfall mode.

“Darkness descends on Kings Canyon in Shadowfall, a warped version of the Apex games hosted by a mysterious figure,” Respawn explains.

“At the start of a match, you and 34 other solo players will drop into an eerily-lit Kings Canyon and fight to the death… with a dark twist. Once you die you will respawn as an undead version of your Legend and join the powerful “Shadow Squad”.

“As part of the Shadow Squad, you will lose your ability to use weapons and your legend abilities will be stripped, but in return, you will be given increased movement and jump speed, along with a brutal melee attack. You’ll also have the ability to scale walls and be given unlimited respawns via skydive.

“The battle rages until there are only ten living Legends left, who must then join forces and make it to an evac ship while the Shadow Squad attempts to stop them at all costs.”

“The Fight or Fright Collection Event brings another set of 24 themed, limited-time cosmetics to Apex. We strive to give players choice in how they can obtain in-game cosmetics, so for this Event we’ve updated the ways players can unlock these premium Collection Event cosmetics.

“We’re also updating the way you unlock the newest Heirloom item during the preview event. If you unlock all 24 Fight of Fright Collection Pack Items during the event, you’ll unlock the Lifeline Heirloom set for free.

“If you don’t manage to unlock this new Heirloom set during the event, it will be available as a bonus in Apex Packs after the event ends.”