One of the new creatures added as part of the new DLC called Genesis Part 2 in Ark: Survival Evolved is a Tek Stryder. Players are rushing to tame it, but many don’t understand the process of how to go about doing so. It might seem pretty straightforward, although there are several steps you have to take to tame this creature successfully.

The great thing about the Tek Stryder is that it has a built-in saddle and each one spawns with a variety of rigs to help you perform various tasks. It is why they are so sought after, but it will take some work in Ark: Survival Evolved before you are able to tame one for yourself.

How To Tame A Tek Stryder 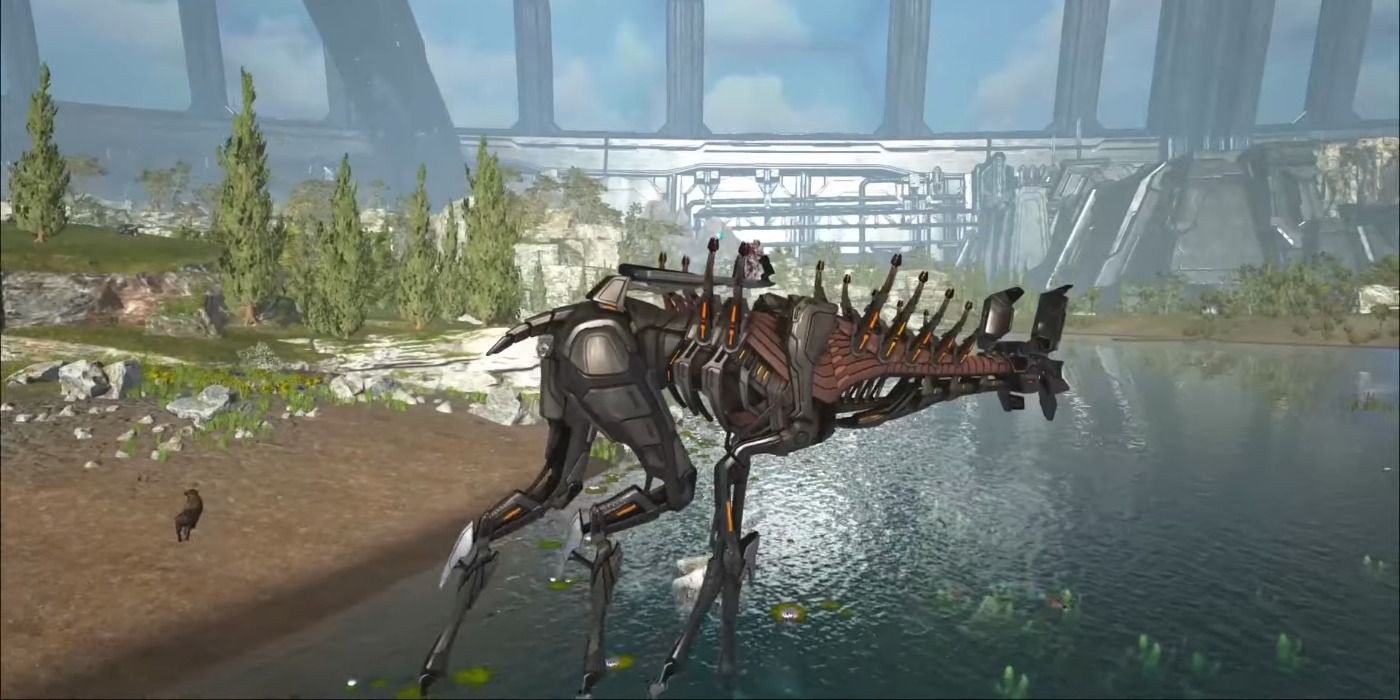 A Tek Stryder is a mechanical creature that resembles a deer and it can be tamed using nonviolent methods. It is one of the new creatures added as a part of the Genesis Part 2 DLC and some would argue it is the best of them all.

Here are the steps you need to take to tame a Tek Stryder:

Complete The Correct Number Of Missions 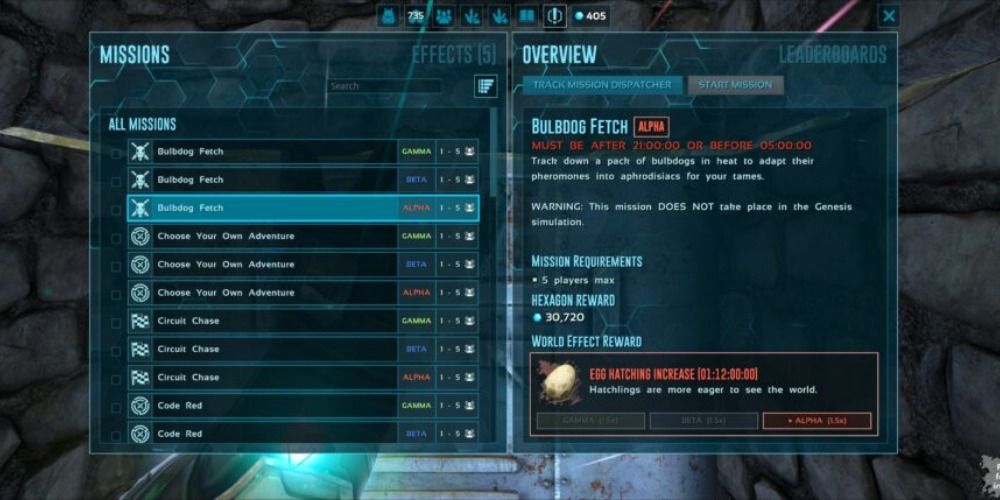 The first thing you have to do before you can even think about taming a Tek Stryder is to complete a specific number of missions. The amount you have to finish is dependent upon the level of the Tek Stryder that you desire to tame.

These are the Tek Stryder levels with their respective number of missions: 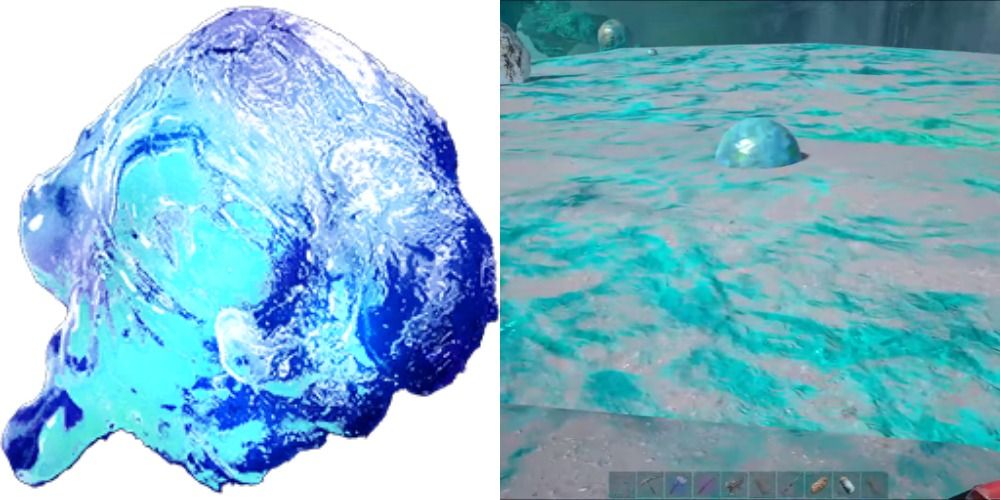 The second step is to gather a lot of Mutagel, and it can be found on the Ambergis Asteroids and the Innard’s Biome. You must break the brown rocks and collect the bubbles on the asteroids, or you have to wait for the acid to recede in the pool beneath Rockwell’s heart.

Once you have gathered quite a bit of this substance you want to place it in the ‘0’ on your Hotbar. 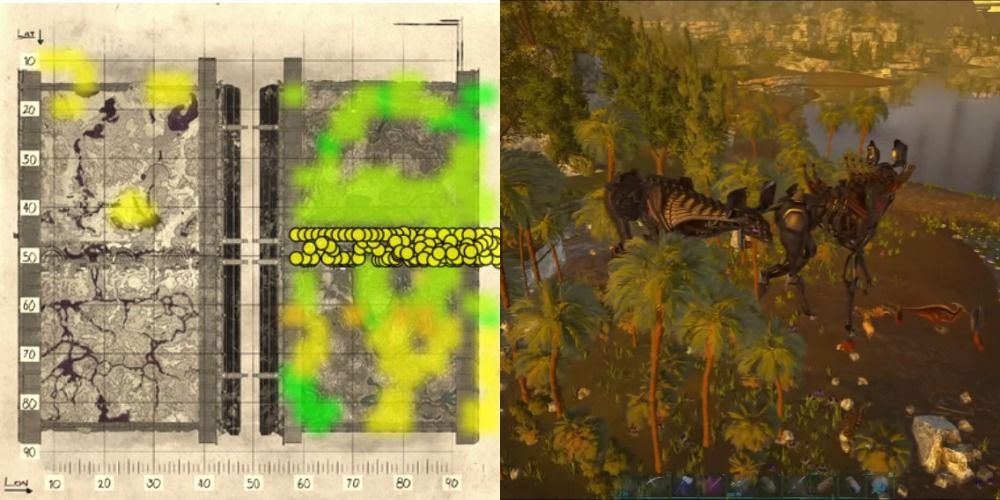 If you want to tame a Tek Stryder you need to know where to find them, and luckily, they are quite plentiful across the map. You can usually find them in Eden, and they usually reside across the center of the map from left to right.

They will not attack you unless you act as an aggressor toward them first, but if needed you can use a Large Bear Trap to immobilize them.

Feed It Mutagel And Interact With The Sparking Body Part 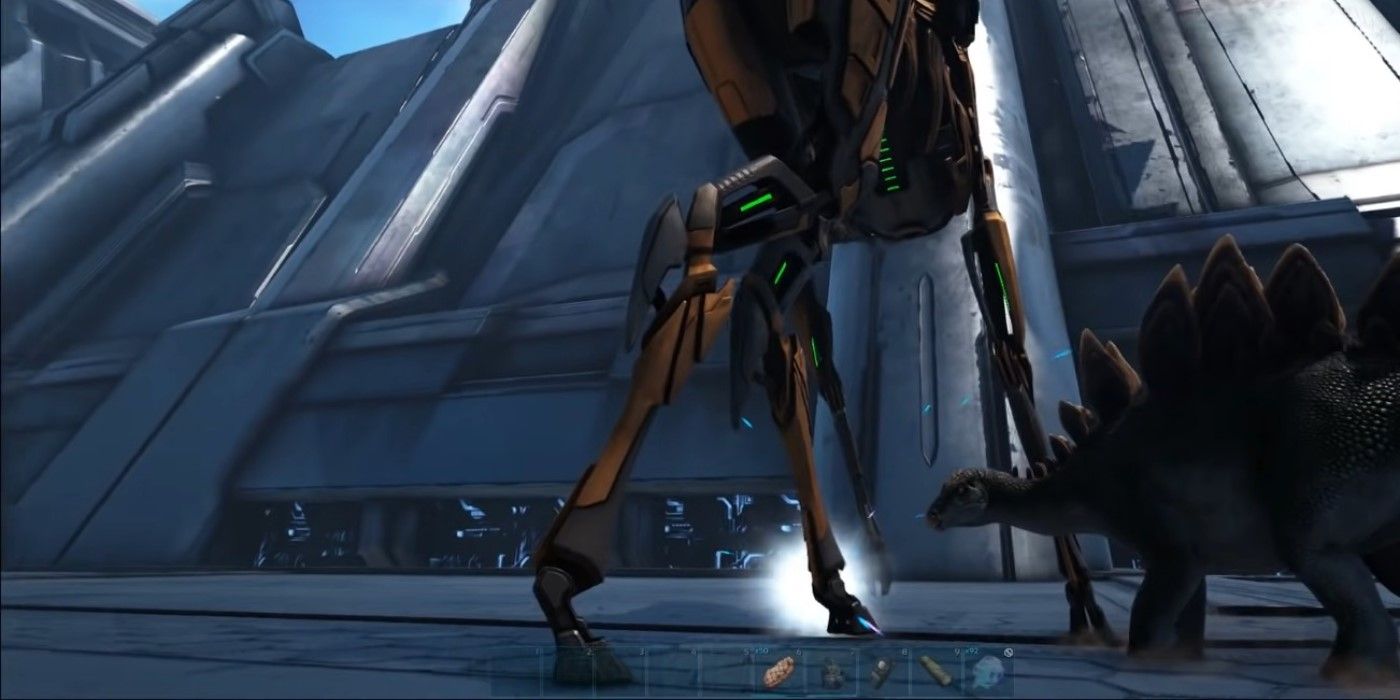 Once you have found a Tek Stryder you need to feed it the Mutagel from your Hotbar in order to begin the taming process. You will need to find which part of its body is sparking and then interact with this as well.

It will usually end up being its head or feet, which is why a Tek Suit can come in handy for this tame. Many players find it useful to fly up and start on its back in order to feed it the Mutagel.

Stay Inside The Red Circle 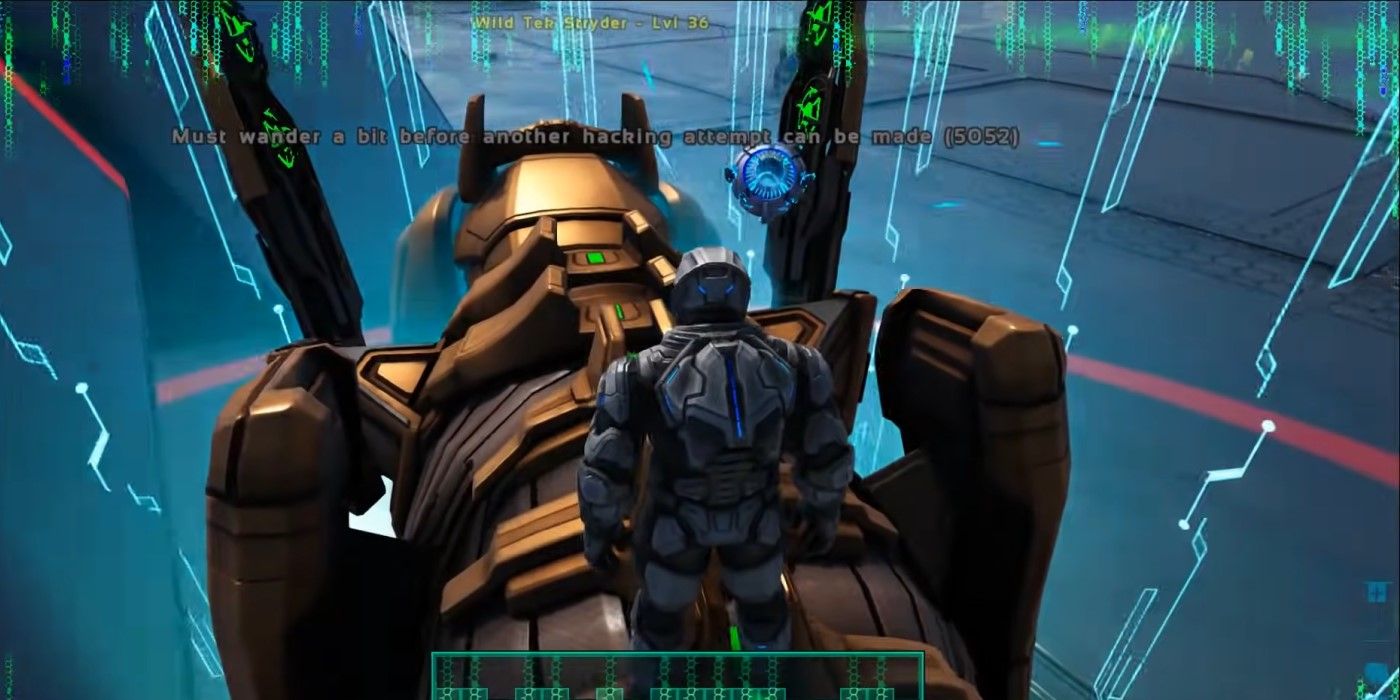 The second you interact with the sparking body part the taming process will begin. The most important thing to remember is that you need to stay within the red circle that is around the Tek Stryder if you don’t want to have to use single-player cheat codes to tame it.

It gives you a pretty wide berth and you can always hop onto this creature’s back if you are having a hard time staying inside the lines.

Play The Minigame And Repeat 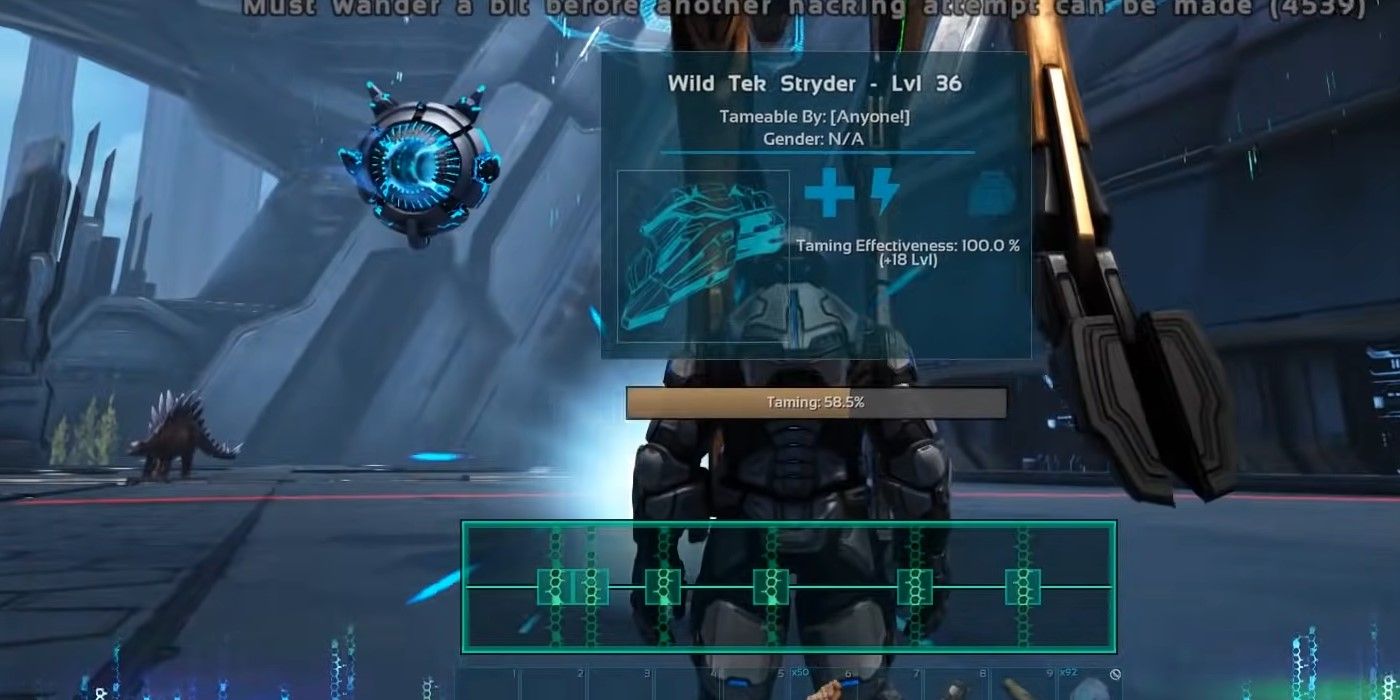 There will also be a minigame that you have to play alongside your role of staying inside the red circle. The goal is to press the right button when the spinning squares line up with one another.

After you have completed the minigame the Tek Stryder will have to travel a certain distance before you can hack it again. If you approach it you will see information such as a Grace Period with a clock that is counting down and an Affinity percentage.

If you manage to tame the Tek Stryder a second time within the Grace Period (by feeding it Mutagel and then completing the same process) it will be tamed the Affinity Percentage listed.

The higher the level of the Tek Stryder, the more times you will have to repeat the taming process. It is why having a lot of Mutagel and patience is required in order to be successful with this tame, but it is still easier to tame than a Noglin. 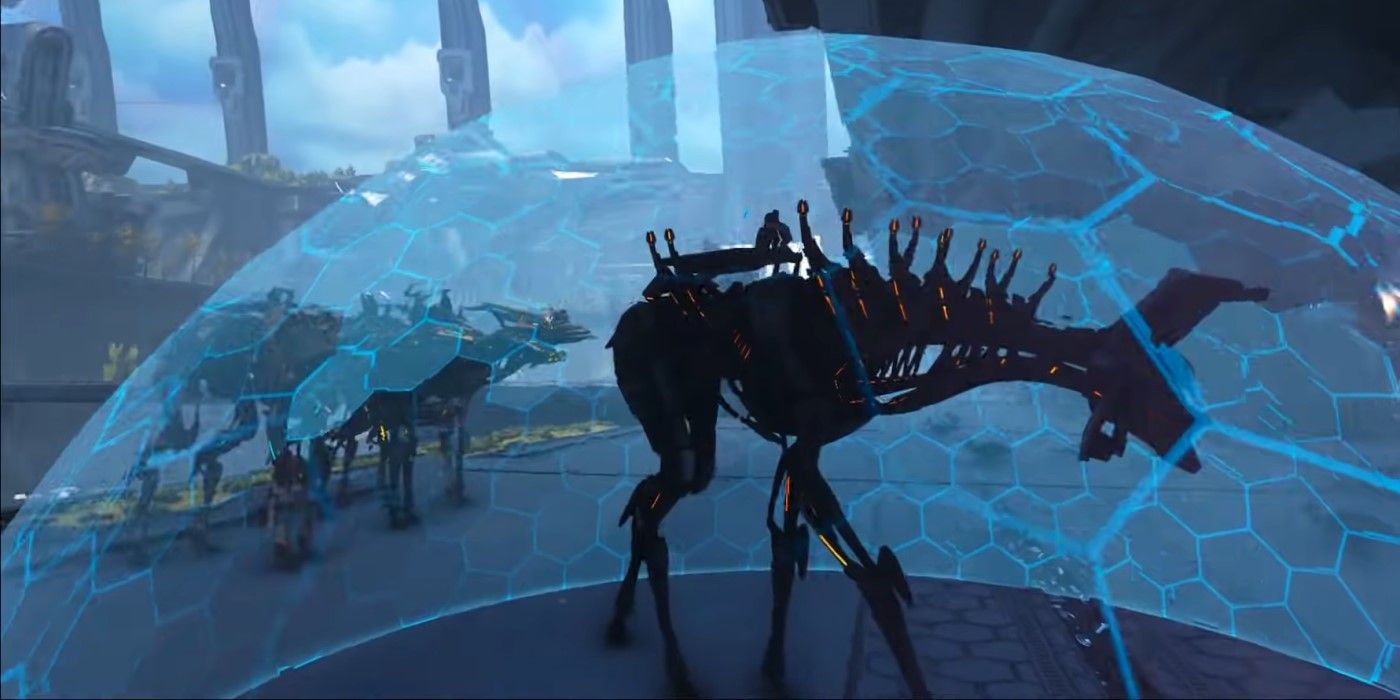 The Tek Stryder can have various attachments equipped that make it better for different roles. This could include gathering materials or being a menace in combat, which is why it is important to understand its possible different Rigs.

It also has other uses that are common among all Tek Stryders such as replanting foliage, recharging batterie, sleeping pod, and a transmitter.

Here are all of the Rigs a Tek Stryder could potentially have: