A Show of Character is the next main quest in Assassin’s Creed Valhalla Wrath of the Druids after Flann Over Ireland, and tasks you with retrieving the iconic Book of Kells for Abbot Eogan of Armagh – interestingly, the Book of Kells still survives today and can be viewed in Trinity College Dublin.

This is a fairly lengthy quest with lots of twists and turns, further ramping up the pace of the core Wrath of the Druids narrative. There are quite a few parts to this quest, so if you’re stuck on a specific section, be sure to scroll down below and you should be able to spot a solution for exactly where you’re having trouble in no time.

So, whether you’re struggling with the bandits at Inchroe or can’t quite figure out how to break through the rubble blocking the entrance of the Boyne Tombs, look no further than this comprehensive Assassin’s Creed Valhalla Wrath of the Druids A Show of Character guide.

Wrath Of The Druids Walkthrough: How To Complete A Show Of Character 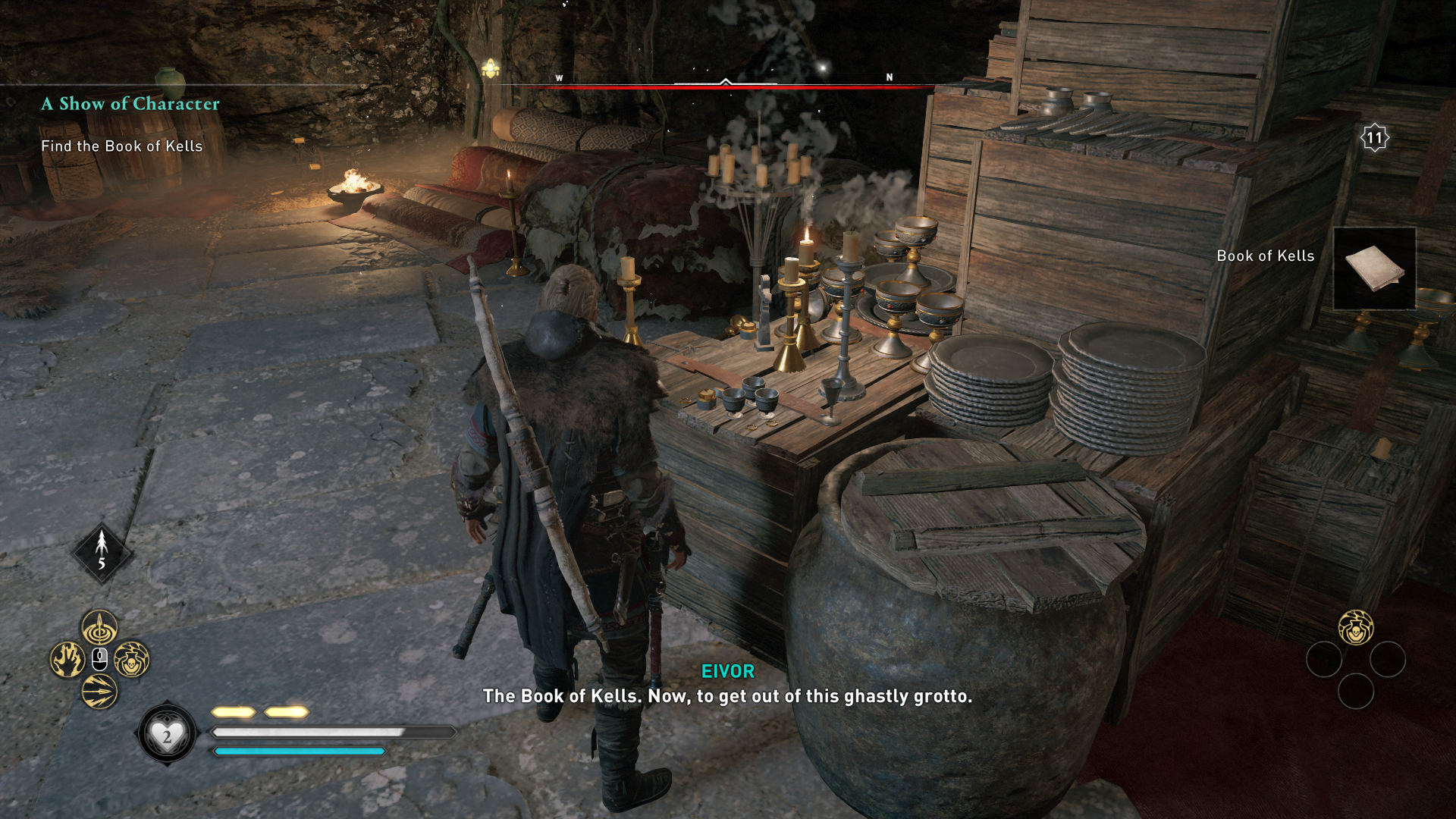 Your first objective in A Show of Character is to head to Durrow, which is where Flann Sinna’s castle is located. Once you arrive, speak to Flann, who will be aware of the fact that you and Barid were the ones who saved him from the assassins back at Tara. Unfortunately, Flann is slow to trust – as a result, you’ll need to complete yet another task for him before he’s ready to offer his support for Barid maintaining his position as King of Dublin.

The task in questions requires you to acquire the Book of Kells, a revered Irish text originally penned by monks prior to the first Viking invasions in the late 8th Century. Once you agree to reclaim the text for Flann Sinna, head directly north in order to reach Inchroe. The fastest route is to go past Flann’s castle and head down the cliff. If you’re struggling to find Inchroe due to the fact there’s no quest marker, we’ve taken the liberty of including a screenshot with the exact location marked below. 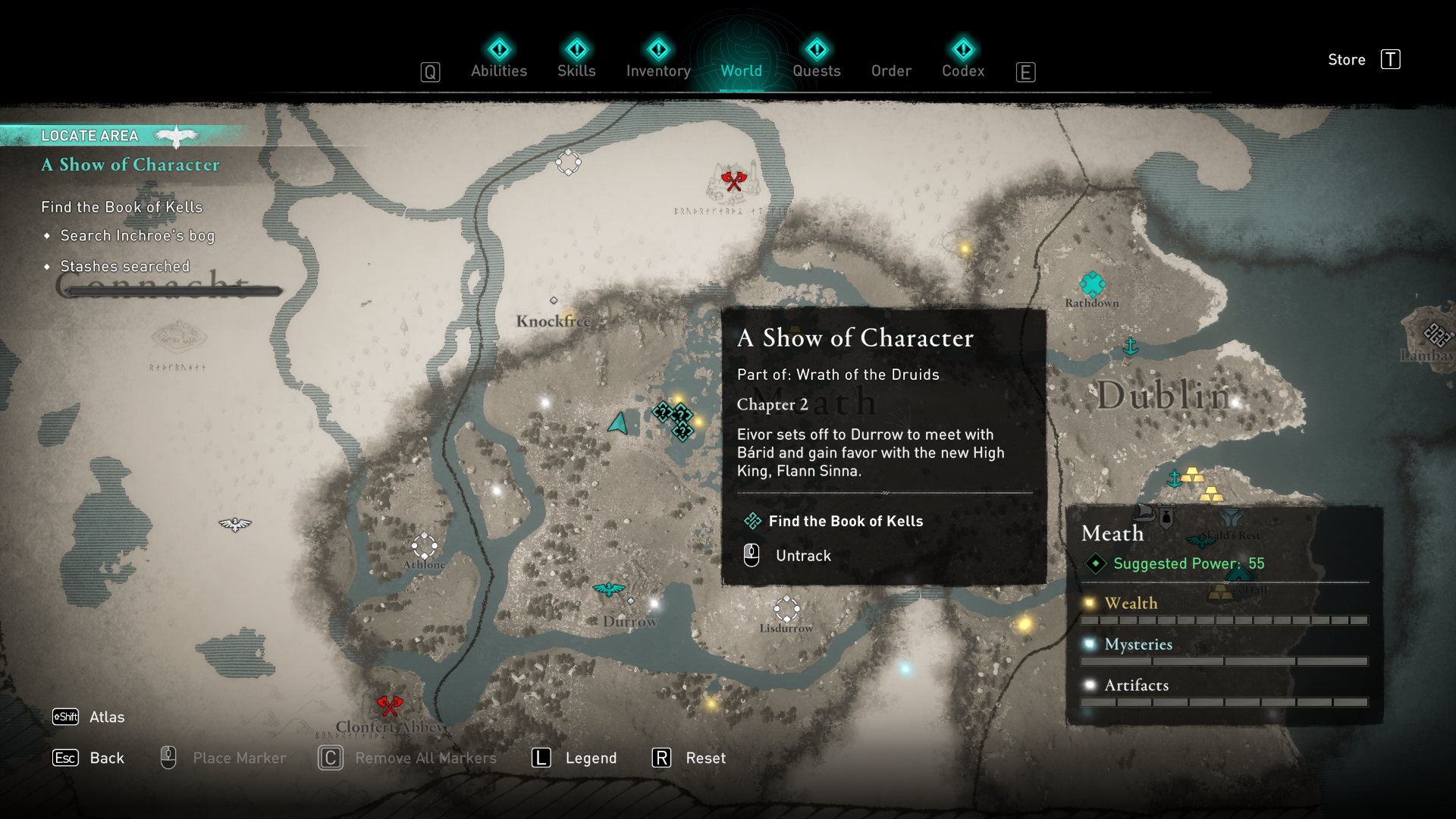 When you arrive at Inchroe, sneak through the water surrounding it before going in. The best point of entry is actually on the eastern side of the area, as it will allow you to easily assassinate the bulky man-at-arms here, who is the only formidable enemy.

There are three quest markers here, all of which could potentially be where the Book of Kells is. I’m not sure if this is randomized, but I found it first try at the middle marker. Once you enter the hut, you’ll see that Thorstein – the same Thorstein Barid sentence to exile – is responsible for the burglary. He will tell you that he already sold the book to a group of people who have taken up camp at the Boyne Tombs.

Head to the quest marker and you will soon reach these tombs. Unfortunately, the door is blocked. In order to breach it, you need to scale the exterior of the tomb, but don’t be too hasty – there are enemies on top of it, so it’s best to proceed with caution here. Slowly scale the tombs and hide in the grass. Your aim should be to assassinate the two boar druids without alerting anyone, which makes the fight much easier given that the rest of the enemies are mere grunts.

Kill the druids and take out their, then quickly dispose of the other weaker enemies. You will see explosive barrels all around you – pick one up and head back to the entrance of the tomb. You can try to throw the barrel, but it will usually collide with an object on its trajectory and explode prematurely. Instead, place it in front of the blockade, move back to a safe distance, and shoot an arrow at it in order to detonate it without damaging yourself.

Once you get into the tombs, head directly straight. Wait for a boar druid to come towards you, assassinate him, and jump down to the right hand side. There are some chests here to loot, but the most important object is a key on the table.

Collect the key and head back towards the entrance. Instead of going right after the boar druid, go left – as in, directly left immediately after entering the tombs – and crouch through the gap in the wall. Kill the druids on the ground floor and use your newly acquired key to unlock the door on the right hand side of the room.

Follow the stairs up, loot all of the chests, and collect the Book of Kells from a table. Once you have it, you can fast travel directly to Durrow in order to speak to Flann and return the book, finishing the quest. The next main quest is War Efforts.