AtGames, the makers of throwback mini-consoles and arcade cabinets, has acquired an interest in the nearly 40-year-old Ms. Pac-Man intellectual property, roughly a week after Bandai Namco sued the company and alleged AtGames had interfered in negotiations to shore up a tangled rights issue.

A representative of General Computer Corporation, the company of college-kid developers who first programmed Ms. Pac-Man in 1982 and later sold the creation to Bally/Midway and Namco, confirmed to Polygon that the transaction had taken place. AtGames acquired the royalty interest owed to GCC’s seven rights holders — effectively, the right to be paid whenever the Ms. Pac-Man work is used commercially. The deal was consummated sometime in August.

“As part of our ongoing initiative to be caretakers of important cultural touchstones, we are privileged to gain these valuable rights pertaining to the iconic Ms. Pac-Man arcade game,” Ping-Kang Hsiung, the chief executive of AtGames, said in a statement put out this morning.

AtGames, known for its line of Flashback and Flashback Blast plug-and-play retro gaming devices, announced the transaction early this morning. It follows a federal lawsuit from Bandai Namco alleging that AtGames misrepresented itself as licensed to make Ms. Pac-Man products, and created or even distributed Ms. Pac-Man mini-cabinets under those claims.

AtGames representatives declined further comment to Polygon, but did provide a copy of their attorney’s response to Bandai Namco’s counsel. The letter calls Bandai Namco’s actions “another transparent effort to punish AtGames for entering into its August 2019 agreement with the GCC individuals, to sully AtGames’ reputation, to disrupt AtGames’ business relationships and to artificially manufacture leverage in the ongoing negotiations between the parties.”

“To wit, [Bandai Namco Entertainment America] is so irritated by the fact that AtGames has entered into a contract with the GCC Individuals — an arrangement BNEA hoped to exploit for its own benefit through deceit and bad faith — that it has ordered its lawyers to attack AtGames by any means possible,” AtGames’ lawyer wrote.

Reached by Polygon on Thursday afternoon, a Bandai Namco of America representative noted that the company does not ordinarily comment on pending litigation. However, the company did comment to underline the nature of the rights AtGames bought and the ones Bandai Namco has and controls. 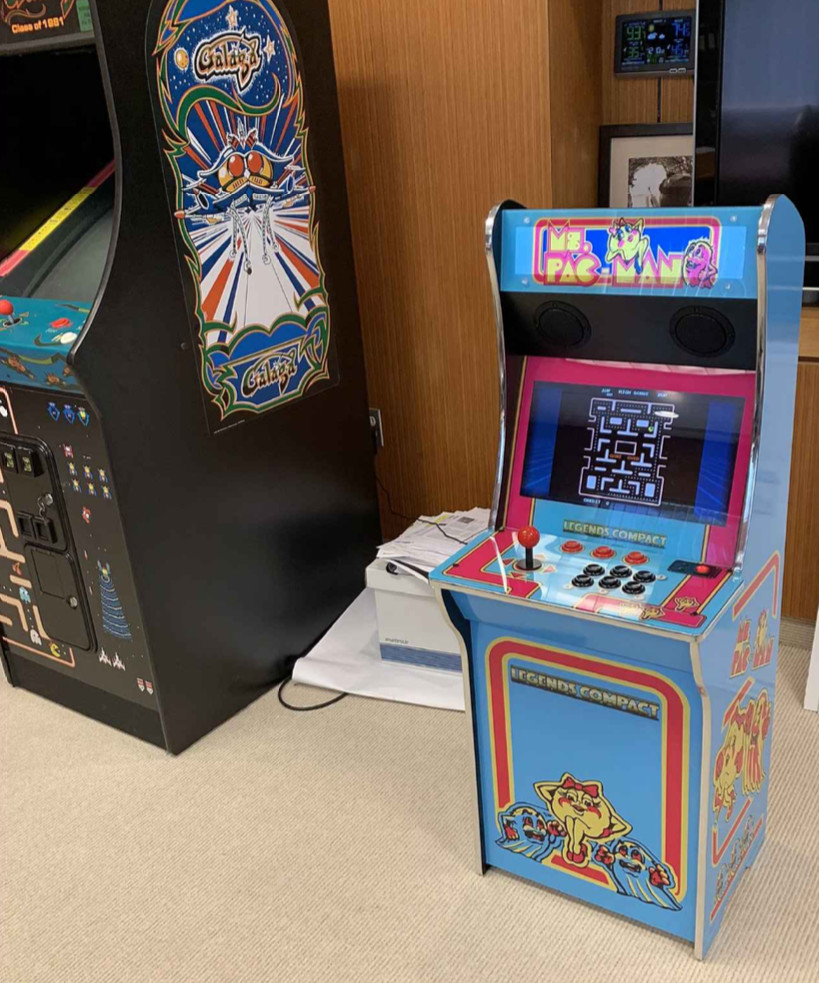 AtGames has not acquired any control over the Ms. Pac-Man intellectual property, merely the right to be paid royalties when it is used in commercial works. The position stems from the complicated way in which Ms. Pac-Man was developed. Three programmers, then students at the Massachusetts Institute of Technology, developed a mod for Namco’s Pac-Man that eventually became Ms. Pac-Man, after they shopped it to Bally/Midway, then the rights holder in the U.S. for Pac-Man products. Over the years, Namco and its descendant companies acquired full control over Ms. Pac-Man. But even after agreements reached in 1983 and 2008 with the seven individuals connected to GCC’s stake in the IP, some royalty rights and obligations were still unresolved.

Bandai Namco, in its lawsuit, says it had been in discussions with the GCC successors-in-interest about a once-and-for-all deal over Ms. Pac-Man, and that AtGames’ meddling had tanked those negotiations. The lawsuit points to a mini Ms. Pac-Man cabinet it says AtGames made without permission, insinuating the company was making and offering for sale unlicensed products. AtGames’ position is that it was a mock-up device privately shown to someone who isn’t a consumer (that is, someone from GCC).

The intrigue over Ms. Pac-Man is one half of the case Bandai Namco presents in its allegations of false advertising, unfair competition, and copyright infringement. The other claims concern a plug-and-play Pac-Man Flashback Blast device whose commercial launch in 2018, Bandai Namco alleges, contained code it had not approved (specifically, the game was a port of the Nintendo Entertainment System version and not the arcade game ROM). The unit sold poorly, with many reviewers alleging they had been misled by the review unit AtGames provided, which had the more desirable arcade ROM.

The full text of Bandai Namco Entertainment of America’s complaint follows. The complaint itself is the first 26 pages, the remaining pages are exhibits referenced in the allegations.

Bandai Namco Entertainment of America vs. AtGames, 2019 complaint by Polygondotcom on Scribd