My Bayonetta 3 demo begins with the Umbral Witch bashing up faceless homunculi on a speeding train with a stunning flurry of high kicks and pistol whips. Suddenly, a ghostly monster roughly the size of Madison Square Garden slams into the track, sending Bayo’s train car hurtling through the air. Just before it smashes into the side of a building, she summons Gomorrah, Devourer of the Divine, a Godzilla-like demon that caused some problems for our beloved heroine in the past, but now seems to be fully under her control. Her clothes burst off, and seconds later Bayo is mounted on the back of the beast, slipping and sliding down a near-endless series of collapsing skyscrapers in what I can only describe as a mix between Monster Hunter’s Wyvern Riding and Plessie’s Plunging Falls – but way sexier, of course. If you were at all worried that Bayonetta 3 would tone things down, I can assure you PlantinumGames is still firmly in the shock and awe business, and business is a-booming.

Diving back into Bayonetta after almost a decade is easier than I expected. Even with all her new demon-summoning and form-changing abilities, it’s not hard to get a handle on the controls and dish out some incredibly satisfying combos. Every combination of buttons you press will make something amazing happen on screen, so even if you’re a little rusty like me, you’ll have no problem quickly finding your witch legs (and the guns at the ends of those legs). There’s an incredible amount of depth and variety in Bayonetta’s combat options, especially this time, but you get to discover it at your own pace, which has always been a strength of the series. It makes spectacle accessible to newcomers while hardcore purists can spend hours chaining together combos to conquer higher difficulties.

I was also immediately reminded that Bayonetta is still in a league of its own when it comes to spectacular action set pieces. Devil May Cry is certainly its closest rival, but even the Son of Sparta himself would have to admit he’s got nothing on Bayonetta. What Bayonetta 3 lacks in grimaces and gore it makes up for with action so gratuitously over-the-top it would make the editors of Heavy Metal say “Alright, it’s a bit much, don’t you think?” 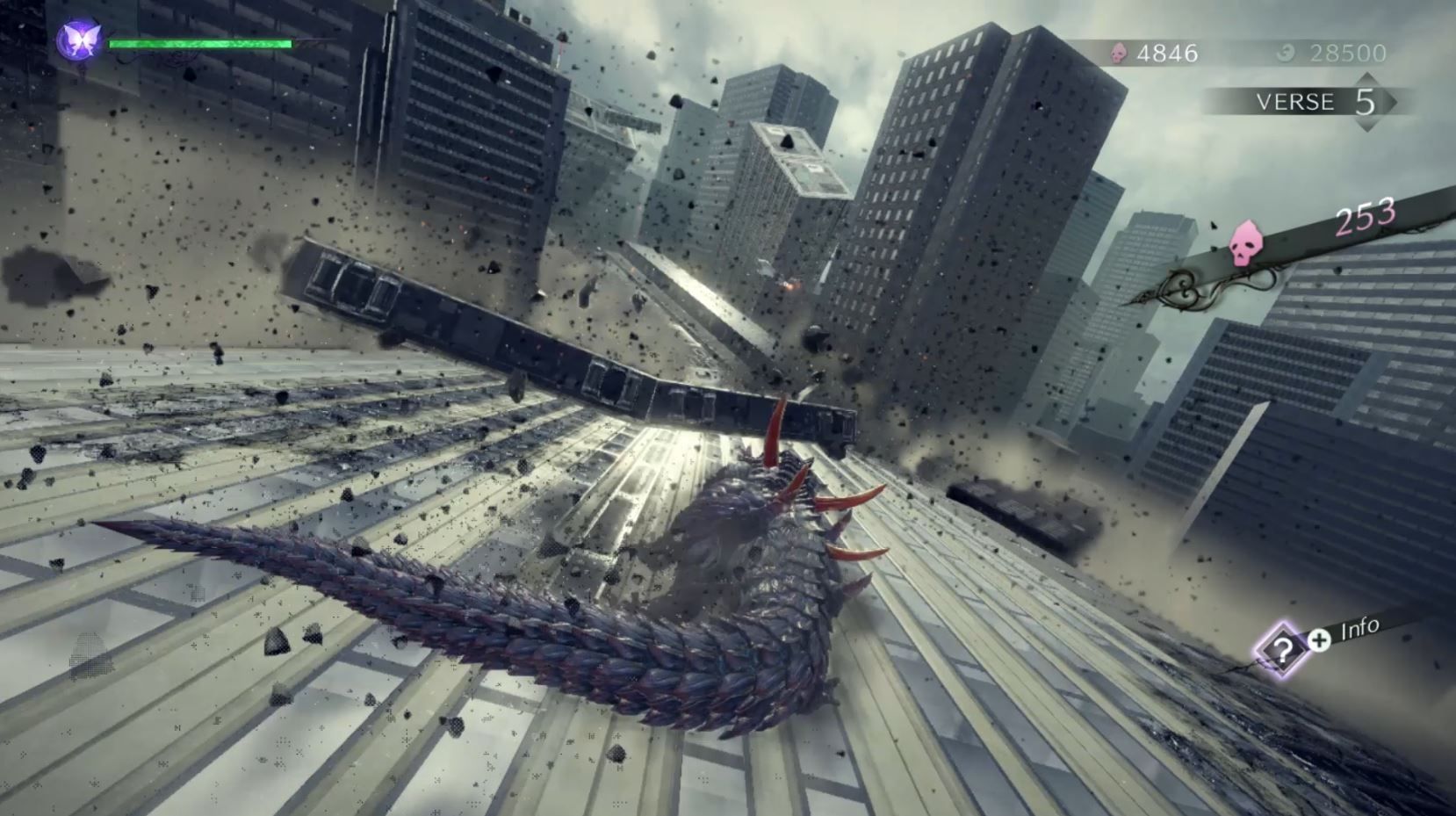 Case in point: Bayo’s new demon summon ability. Any other game would make summoning a kaiju into some lusciously temporary production with a cutscene and an energy meter that quickly runs out to ensure you only get to break out the big guns on special occasions. But Bayonetta 3 treats demon summoning like a simple combo modifier. Not only can you summon and release your demon at will, but you can weave their attacks in with your regular combos. One button punches, one button kicks, one button makes a 20-story lizard monster burst out of the ground and swallow your enemies whole. No big deal.

With all that power at your fingertips (or the heels of your black leather boots) you can imagine how massive the enemies have to be too. The demo featured a few of them, including a monster that looked like a two-horned rhino I fought on top of a collapsing skyscraper and a couple of big ugly bastards that could use their goo-filled bellies to sink into the pavement and dodge my attacks. I had no problem giving them a real pounding with Gomorrah, but the ability to fight with both Bayo and her demons simultaneously creates so much room for skill expression. While you control the demons’ attacks, you can also reposition Bayonetta (who dances around more than 90% unclothed while demon summoning, of course) in order to set up well-timed follow up attacks. It’s as if Dante, Nero, and Vi from Devil May Cry 5 were all combined into one character that could do it all and then some.

I got to play with a bit of Bayonetta’s Demon Masquerade ability in the demo as well, which completely changes her playstyle and combo capabilities. As with demon summoning, you can weave masquerading in and out of your combos to deliver sensational finishing attacks or big AOE blows to knock back your enemies. I messed around with the Madama Butterfly form, which speeds on her attacks and extends her reach considerably. It’s so satisfying to transform for giant finishing attacks at the end of your combos, and you can do it whenever you want with very little restriction.

It all sounds like a lot to manage, but Bayonetta 3 does such a phenomenal job of keeping the controls simple and intuitive that I never felt overwhelmed or at a loss. Rather, it felt like any button I pressed would cause something amazing to happen, and actually learning the combos was unnecessary, but rewarding. The Bayonetta series is so good at making you feel like you’re good at it, especially in the newest entry. It’s like the anti-Dark Souls. Press buttons, see a butt, and win. Game of the Year.