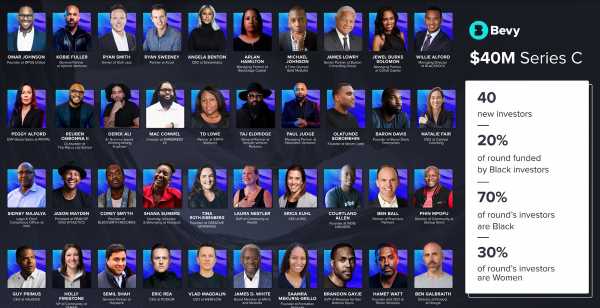 Bevy has raised $40 million at a $325 million valuation for its platform for staging virtual events for enterprises. And it has also broken a diversity barrier by getting 25 Black leaders as its investors.

The funding came from Accel Partners, LinkedIn, Qualtrics co-founder Ryan Smith, and Upfront Ventures. It also came from 25 Black investors including diversity pioneer James Lowry, Facebook board member Peggy Alford, Beats by Dre marketing exec Omar Johnson, and others. About 70% of the people participating in the round, representing 20% of total funds raised, are Black investors.

How the company got Black investors 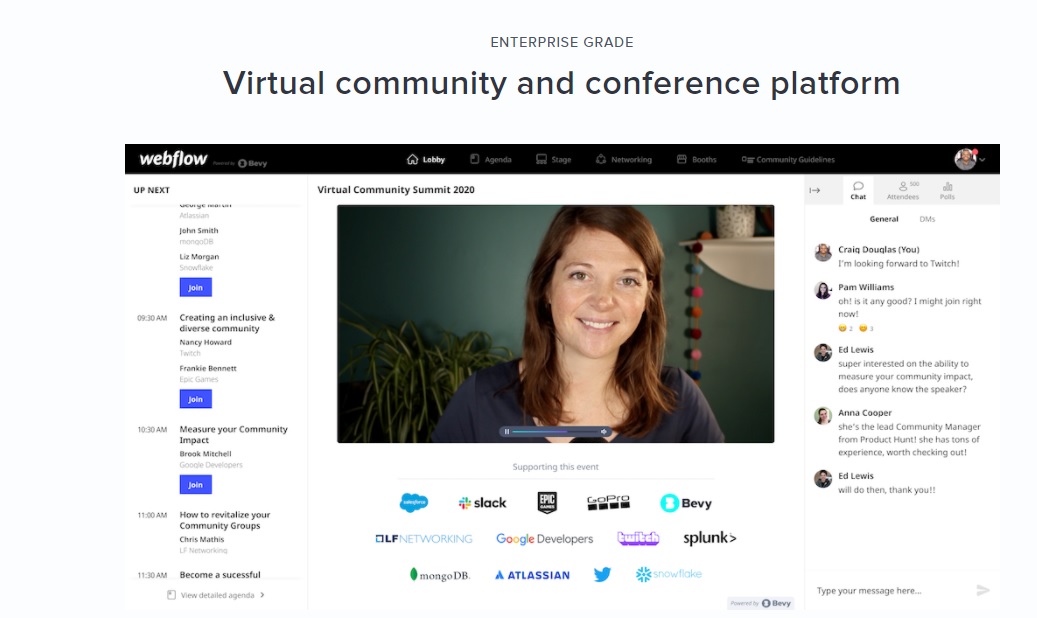 Above: Bevy pivoted to virtual communities.

How this happened was an interesting tale. Bevy CEO Derek Andersen and cofounders Joel Fernandes and Alex Bendig started Bevy in 2017, after they had a successful startup with Startup Grind. With Bevy, they wanted to build a platform for enterprise communities. But the pandemic forced them to building virtual communities and digital events.

A year ago, Bevy had a different problem. It had grown to 27 employees and it had no Black employees. After the killing of George Floyd and the Black Lives Matter unrest, Andersen had to grapple with uncomfortable truths.

“A year ago, I’m embarrassed to say, of the 27 people on the team, not a single one was Black or Brown,” Andersen said. “When George Floyd was murdered on May 25, we started to really look inside of ourselves. What could we do to bring about the change that needs to happen?”

With his own children, who are between three and 11, Andersen said he had conversations about racism. He also looked inside his company to talk about what the company could do. The more he thought about it, the more Andersen believed that improving racial inequities wasn’t only the right thing to do in the tech sector, but it was the profitable thing to do because it made so much business sense, especially for a community-oriented company.

Getting investors on board 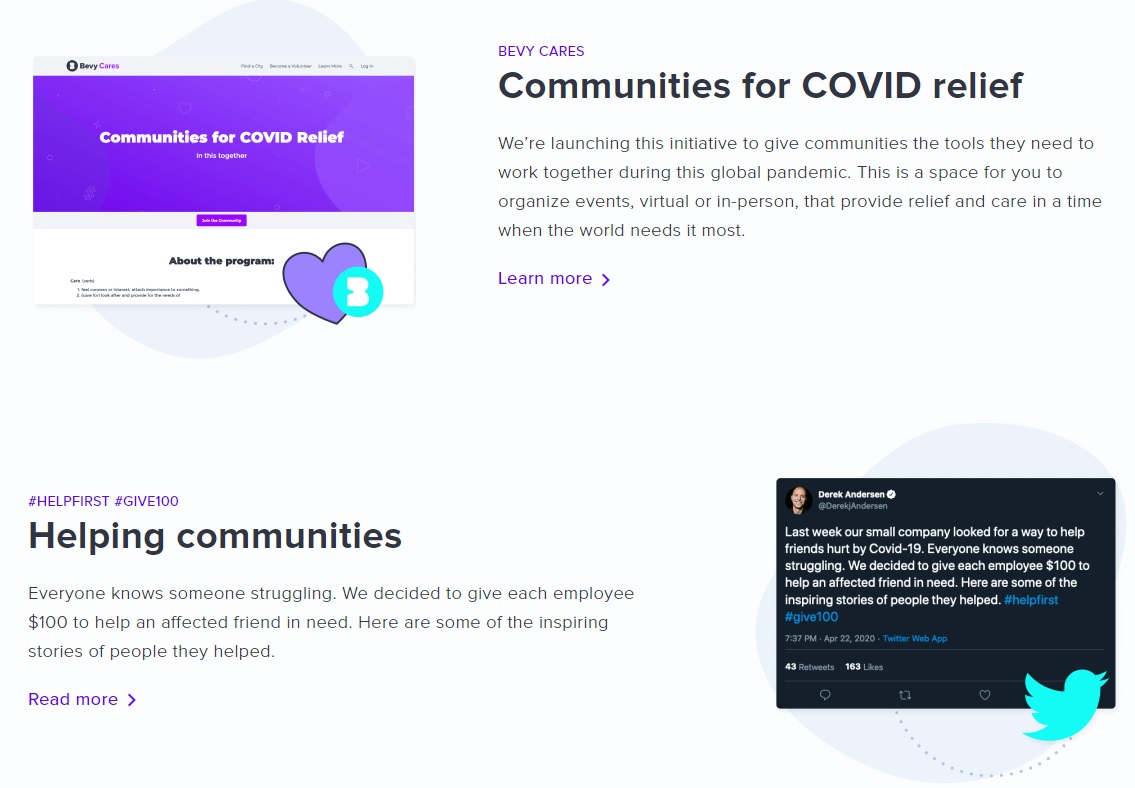 Above: Bevy is focused on helping communities.

Andersen didn’t do it alone. He got help from Black investors such as Kobie Fuller, general partner at Upfront and founder of Valence. When they learned he was serious, they referred more Black employee candidates to Bevy.

“I saw is that this could be a very large company worth billions and billions of dollars,” said Fuller. “But what I’m most excited about Derrick, as a founder CEO, is not what he’s building, but how he’s building it. And the type of angle he’s taking around prioritizing culture and team and thinking about it, not from only regarding his workforce, but all facets of the organization, including the board and also the cap table.”

What made sense was that the company needed to reach out to the community to build a community platform.

“With us being a community platform, it’s silly to think that we’re going to be the best community platform that’s out there if our organization doesn’t appropriately reflect the communities that we serve,” Fuller said. “Derek set KPIs against the diversity metrics, which a lot of people will talk about, but he drove action towards diversity. We have to think about bringing the Black community closer to the innovation economy, where wealth is created at a staggering rate.”

Fuller believed enough in the mission that he recruited his friends.

“I devoted my whole life to try to deal with diversity and inclusion,” said Lowry. “It’s been a tough battle. I’ve had my successes with what I’ve done on Wall Street, major corporations, and the auto industry. But nothing has happened to shake up America more than George Floyd’s killing. In Silicon Valley, within the tech industry, you just haven’t seen progress with minorities and women. We’ve seen progress. But if you look at where we are, in terms of the number of businesses of size, creating large revenues, and employing a lot of people, we haven’t been as successful as I had hoped,” Lowry said.

Then Fuller came to him to talk about Bevy. Lowry saw a good opportunity in Andersen’s company, and they all agreed that this was an opportunity to do good and do well at the same time.

“I feel so energized and motivated to be part of this,” Lowry said. “Hopefully, we can serve the world. When you have a founder who cares, and you have investors who want to invest in the right thing, then we can make history.” 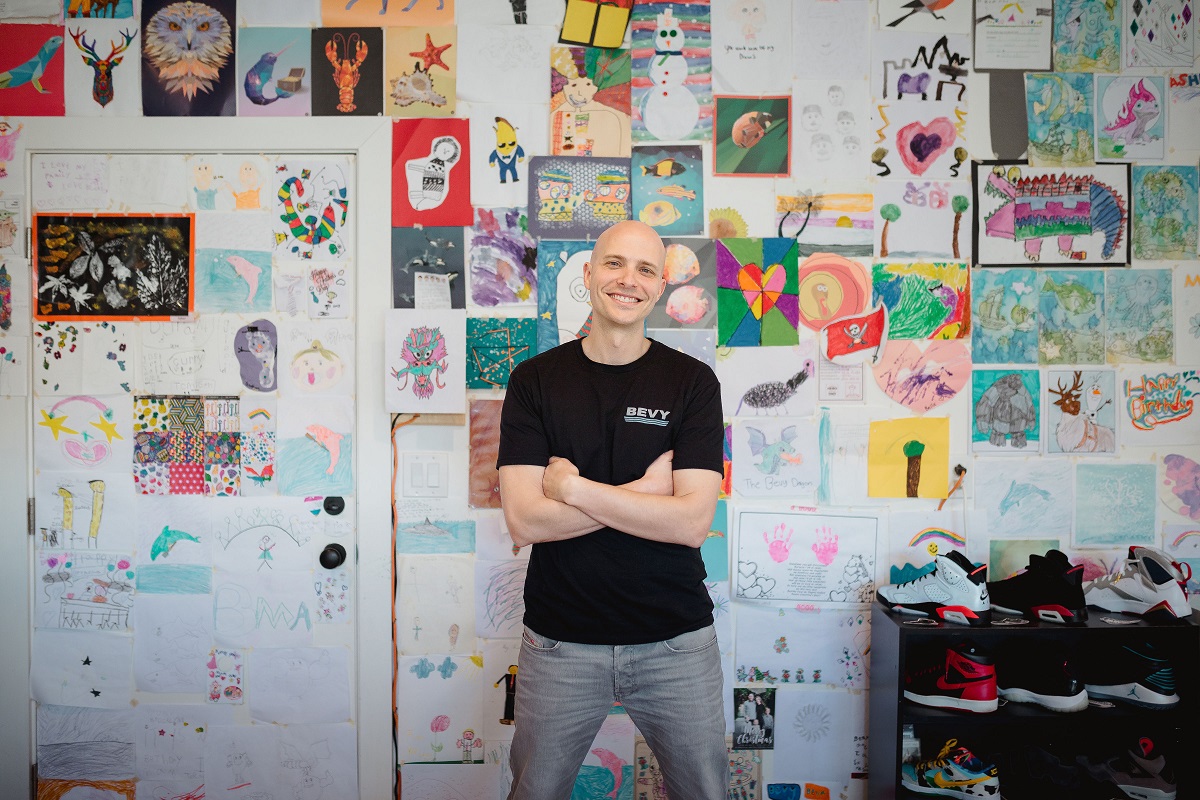 Above: Derek Andersen is CEO of Bevy.

Customers pay between $20,000 and $1 million annually to license Bevy to scale their communities and host virtual conferences. As hybrid events and eventually in-person events begin to emerge post-pandemic, Bevy wants to be the gold standard, enabling enterprise brands to not only host large virtual conferences and events, but to also scale their global community events through a network of smaller, high frequency, globally connected events.

As a result, the company is poised to win the enterprise portion of the market and is on track to reach $30 million in annual revenue run rate by the end of 2021, a 15 times increase from 2019.

Bevy powers enterprise event communities for brands such as Google, Snowflake, Facebook, HubSpot, Adobe, Salesforce, Slack, Twitch, Atlassian, Zendesk, Twilio, and others. In 2020, Bevy served as strategic advisors to 125 new and existing enterprise brands as they shifted from in-person communities to virtual and hybrid events.

The collaborative approach enabled 30,000 corporate event planners and enterprise community leaders across Bevy’s ecosystem to host more than 100,000 events across 120 countries, empowering them to hit their key business growth metrics.

The new funding will be used to grow Bevy’s team from 100 employees to 250 in 2021. With a completely remote workforce, Bevy’s team is located in 10 different countries on 4 continents.

Lowry, who was the first Black employee at McKinsey in 1968, said in an interview that adding the Black investors was also a stroke of genius because now Andersen will be able to tap into the networks of the Black investors to stir up more minority candidates. That group wants the company to succeed, and so they will only recommend the best candidates, Lowry said.

“Derek has the strongest, most well connected Black people in America to help him recruit and build his organization,” Lowry said. “I don’t think anybody’s ever taken advantage of that. I think it’s a tremendous thing.”