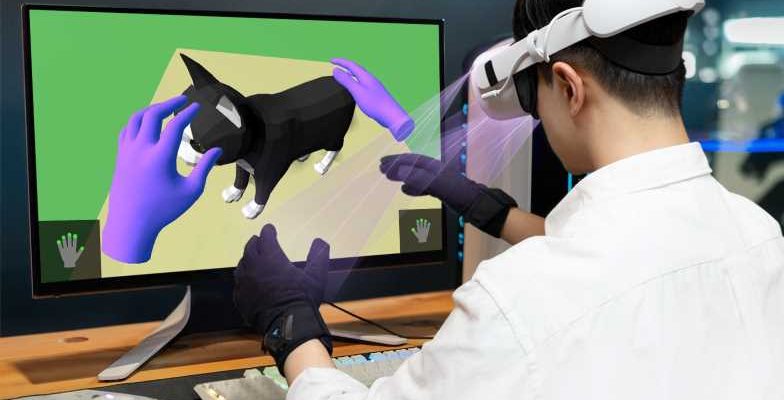 bHaptics, the company behind a range of popular TactSuit haptic vests for VR gaming, has announced TactGlove, a pair of $299 haptic gloves for the consumer market.

TactGlove will be on display at CES 2022 next week, but bHaptics announced the gloves early in the video below.

The gloves employ 10 Linear Resonant Actuators on the tips of your fingers and thumbs to deliver a sense of touch when combined with hand-tracking capabilities on headsets like Quest 2 and HoloLens 2. This likely means the motors will activate when you place your fingers on virtual surfaces, but the gloves won’t actually stop you from putting your hands through objects and walls. They’ll come in three sizes and feature a washable liner.

bHaptics hasn’t yet confirmed if the gloves can be used in conjunction with the TactSuit vest, but the widespread support for the former product has been particularly strong on Quest. It will be interesting to see if the TactGloves offer a compelling enough experience to benefit from the same support. Obviously on Quest the gloves will be limited to hand-tracking experiences, though this library is growing steadily.

Still, this is a competitive market with more players to come. HaptX continues to work on enterprise-grade gloves that will give you a more immersive experience but cost a lot more, and Meta has teased work on its own glove controllers too. TactGlove’s solution might be simpler, but it’ll be first to market at an affordable price.

During CES bHaptics will showcase the game running with Unplugged: Air Guitar — which recently took home UploadVR’s Best Quest Game of 2021 award — and Hand Physics Lab. The company plans to sell developers kits from Q2 of 2022, with a full release coming later on in the year.