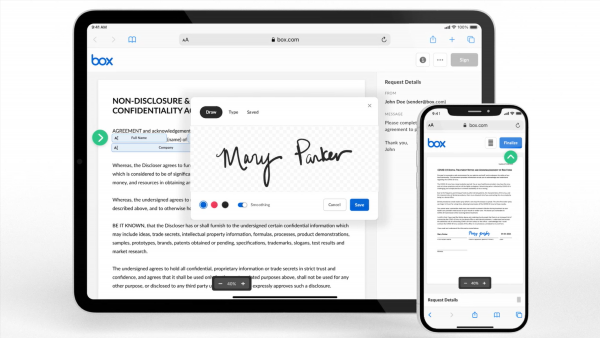 Cloud storage and content collaboration company Box has officially expanded into e-signatures with the launch of Box Sign.

The launch comes six months after Box acquired Dutch e-signature startup SignRequest in a deal worth $55 million. Up until now, Box had offered e-signature functionality via third-party integrations such as DocuSign and HelloSign, but taking SignRequest under its wing signaled the company’s intentions to offer native support directly inside Box. That is what is launching today.

Remote work appears here to stay for millions of people, and digital transformation has been the key phrase of 2021, creating fertile ground for cloud-based technologies to flourish. After all, why fax or mail documents or travel halfway around the world to sign a contract when you can do it all entirely online in an instant?

This shift has been mirrored across industries, with digital identity verification spend skyrocketing as companies embrace remote onboarding. And notarizing, which requires qualified personnel to witness signatures involving high-stakes legal documents, has also had to transition to the virtual sphere, with leading provider Notarize recently securing $130 million in funding from big names that include Alphabet’s CapitalG.

Today’s rollout from Box also plays into a broader shift toward a truly paperless office, one that has been decades in the making.

“Every day, more transactions are moving from paper-based manual workflows to the cloud, and we will only see this trend accelerate as companies shift to a hybrid work environment,” Box chief product officer Diego Dugatkin said in a press release.

Box Sign can be used to send an unlimited number of documents from within the Box web app, with the ability to request signatures from anyone — even if they don’t use Box. It supports four standard fields: date, checkbox, text, and the signature itself.

Other notable features include templates for common processes like NDAs; email reminders and deadline notifications; serial and parallel document routing so multiple users can e-sign a document simultaneously or sequentially; and real-time e-signature tracking for company admins.

Box Sign is available from today at no additional cost for a “subset” of customers on the company’s premium business and enterprise plans, and it will be rolling out more widely later this year.

It’s worth noting that subscribers on the Enterprise plan will have access to additional features, including the ability to include attachments for signers or senders to review and bulk actions — that is, sending individual signature requests to a larger group of recipients. Box also today launched a new Enterprise Plus plan, which will include “extra” features, including all the major add-ons that haven’t been available as part of a monthly subscription so far, such as its automated malware detection tool Box Shield. In terms of e-signatures, the Enterprise Plus plan will include the ability to send documents for signatures directly from Salesforce, which Box has had a deep integration with for several years now. Box Sign will also eventually be made available to those on the paid Starter plan too, though with limited features.