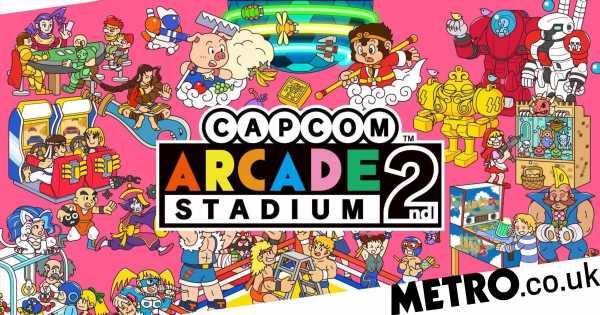 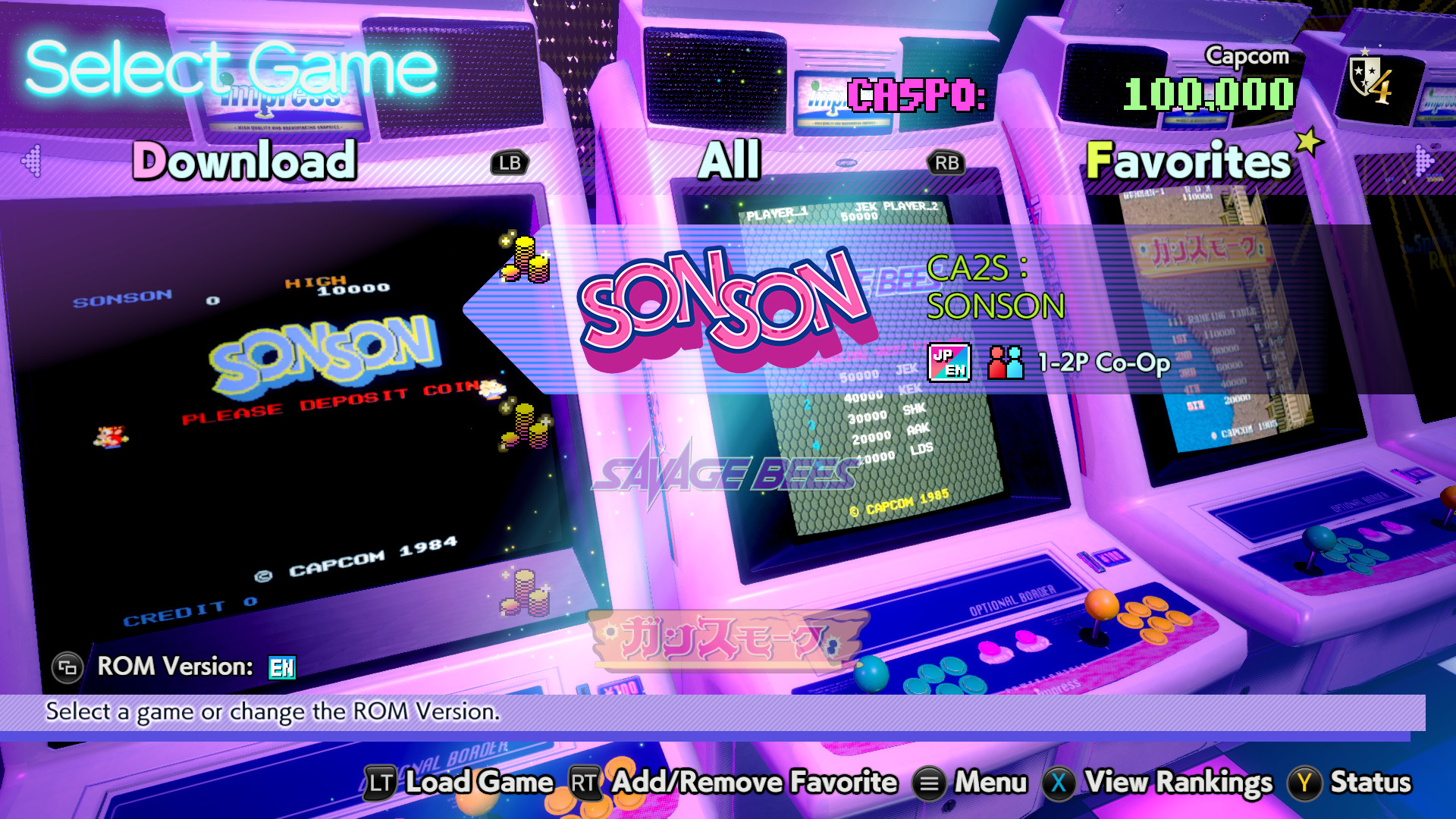 The second collection of retro Capcom coin-ops includes a host of fighting games and obscure classics such as Knights Of The Round.

Retro compilations have been around for decades now and yet still they’re almost always a disappointment: never offering a definitive collection of whatever they’re themed around and rarely ever featuring any kind of museum content to properly celebrate the titles. Minimum efforts have been de rigueur for the concept almost since its inception, which is why last year’s Capcom Arcade Stadium stood out, since it was packed with both classic games and extra features.

The first Capcom Arcade Stadium was also unusual in that it was technically free-to-play, with the option to download the frontend, and one free game, for nothing and then add packs of additional games according to whether you’re interested in them or not (already owning the same game several times over is another common problem with retro compilations). This sequel follows similar logic, although now you can just buy each game individually.

That’s particularly welcome because while the first Stadium was extremely varied in its selection this one has an awful lot of fighting games in it, and if you’ve just bought the Capcom Fighting Collection you’re not going to be interested in any of the Darkstalkers games or the Street Fighter puzzle games. There are still a lot of other titles, both obscure and widely celebrated, to pique your interest, but at the same time there is a pervasive feeling that this compilation is trying to make the best of the leftovers.

There are 32 games available in Capcom Arcade 2nd Stadium but the obvious question, of why they weren’t just launched as additional DLC to the first, is never answered. It’s probably just because its more high profile to release them this way and given how you pay for them it doesn’t cost any more. So other than the frustration of not having everything accessible from the same collection it doesn’t make any difference.

You still get mod-cons like a rewind option, infinite credits, and save states for each game, plus the ability to adjust the speed for most games. There’s also a wide range of screen filters and other display options, including the ability to customise the virtual arcade cabinets if you so wish.

There’s no online play though, which is a shame, and still no real behind the scenes content, to offer any context for any of the games. This is a pity not only because many of them are very obscure but because there are obvious connections between many of the games that you’re just left to guess at, in terms of what must have been going on in with their development and the teams working on them.

The free game this time round is SonSon, a largely forgotten side-scrolling shooter from 1984 that, if only in terms of its graphics, almost feels like a precursor to Ghosts ‘N Goblins. It’s a simpler game overall but the way you can jump up and down the various levels of platform is interesting and offers a surprising degree of freedom. Even if it does quickly make the whole experience seem very samey.

SonSon is something of an odd-one-out though as it’s the oldest game in the collection and the majority of other titles were released a decade or so later. There are only a few other mid-80s titles, such as cowboy shooter Gun.Smoke, which is a similar style of vertical scroller to Commando but wastes its interesting control set-up, where you have separate buttons for shooting left and right, on being viciously difficult.

Savage Bees (aka Exed Exes) is a much less memorable vertically scrolling shooter, with the Second World War themed 1943 Kai being far superior. The horizontally scrolling Hyper Dyne Side Arms is also a lot of fun and another Capcom shooter with an interesting control system, where you can shoot behind you as well as just in front – similar to Section Z from the first Stadium collection.

Capcom was always more willing than most to experiment with unusual control schemes or genre mash-ups, as evidenced by Hissatsu Buraiken (aka Avenger) which is a rare attempt at a vertically scrolling beat ‘em-up, although the difficulty you have connecting your attacks to enemies shows why the idea never caught on.

Last Duel is a more successful experiment, as it starts off with you controlling a sci-fi vehicle in a vertical scrolling level that’s half race game and half shooter. Get to the end though and you transform into a spaceship for more traditional 2D shooter action, and then alternate back and forth with each level. The only problem is that while the spaceship levels are really good the ground-based ones are much less enjoyable, which kind of spoils the gimmick.

It’s easy to confuse the ground levels with the slightly later LED Storm, which has no shooting elements but sees you transforming from car to motorbike in a series of vertically scrolling races. It comes across a bit like a top-down F-Zero but the inability to see far enough ahead of you limits its appeal. It’s still a lot more fun than the eight-way scrolling The Speed Rumbler though, which is a chore to play, as Capcom again try to mix a driving game with a top-down shooter.

Many of these games were converted to the 8 and 16-bit formats of the day. This includes Tiger Road, which in gameplay terms is surprisingly similar to Sega’s Shinobi and yet came out the exact same month in 1987. Playing Black Tiger in its original form, it’s more obvious how similar its eight-way scrolling levels are to the slightly earlier Bionic Commando. It does have another point of interest though, in that it has an in-game shop you can use in-game currency in.

Adding role-playing elements to arcade games was not as uncommon as you might think, and the similarly themed Magic Sword has the ability to rescue AI companions that can join you on your fight. Scrolling beat ’em-up The King Of Dragons goes even further by having actual experience points, levelling up, and a rudimentary inventory. The combat is very simplistic though and Knights Of The Round proves to be a much more enjoyable experience overall – in fact it’s rightly regarded as one of the best scrolling beat ’em-ups of all time, thanks to the ability to not only block but counter enemy attacks.

There are a few other curios in the collection, such as Arkanoid clone Block Block, Dr. Mario clone Pnickies, and Capcom Sports Club – which has quite a good tennis game in it. Three Wonders is also a compilation of three different games, and they’re all pretty good. Midnight Wanderers is surprisingly similar to Treasure’s classic action platformer Gunstar Heroes, so much so that it feels like it must’ve been an inspiration, as it came out two years earlier. 2D shooter Chariot features the same characters and while it’s more generic it’s still a good amount of fun, as is the Pengo style puzzle game Don’t Pull.

Once you start to get into the mid-90s Capcom’s output begins to focus squarely on one-on-one fighting games, thanks to the success of Street Fighter 2. The original game was already in the first Stadium collection, so here you get 15th anniversary release Hyper Street Fighter 2, plus the original (and surprisingly poor) game from 1987, and the three Alpha titles.

Oddly though, none of the Street Fighter 3 games are included, despite them having come out before Alpha. Instead, you get two Darkstalkers games and the well-regarded Saturday Night Slam Masters, which has Mike Haggar from Final Fight in it.

And that’s almost it. Puzzle games Super Gem Fighter Mini Mix and Super Puzzle Fighter 2 Turbo are also thrown in, as are the two Mega Man fighting games – which are too simplistic to be of interest to anyone but hardcore fans of the franchise. Finally, there’s 2D shooter Eco Fighters, from 1994, which is another Capcom game with a neat control gimmick (you can rotate your gun 360° around your spaceship) and has some very nice sprite work.

There are a lot of interesting and fun games in Capcom Arcade 2nd Stadium but even though the average quality of the games is no lower than the original the fact that there’s so many fighting games, and that so many of them have only just been re-released, makes it feel a lot less vital. Especially as there’s still a lot of obvious games missing, with Red Earth and the more obscure Darkstalkers games being kept back for the Capcom Fighting Collection.

The lack of any museum content continues to be a serious omission, and it’s odd because otherwise a great deal of effort has gone into these two compilations, especially in terms of the variety of display and control options. Because of the freedom you have to buy individual games there’s nothing to get actively upset about here, but one day Capcom will release a definitive collection of all their arcade games; the two Stadium titles are the closest they’ve got so far but they’re still not there yet.

In Short: A worthy follow-up to the original coin-op collection but the selection of games never feels quite as varied or vital, and the continued lack of museum features is a shame.

Pros: An accurate snapshot of Capcom’s late 80s and mid-90s arcade output, with a number of hidden gems. Good emulation and a welcome range of modern options, including a rewind button.

Cons: A less varied selection of game types than last time, with few big name titles outside the fighting games. Lack of behind the scenes content and online play is a pity.