One of the big new features in World of Warcraft’s latest expansion, Dragonflight, appears to be dead on arrival. Crafting Orders are a profession system that allow players to provide their own resources to crafters in exchange for gear, but no such transactions seem to be occurring, at least not on the public market. There are a lot of theories about the contributing factors that seem to be keeping Crafting Orders from working as intended. Early on, many believed it was just too soon for anyone to make orders because so many players were still leveling up and figuring out what professions to pursue.

There was an expectation that the order board would begin filling up after a few weeks, but we’re a month into the expansion now and there still aren’t any orders to fill. Those with less-useful professions like Engineers may have suspected that their gear was just too low-demand to generate a market, but no one seems to be having any luck finding orders to fill. What’s the point of introducing an entire crafting market system that no one wants to use?

Crafting Orders are just one part of Dragonflight’s massive profession rework, which is a complex, time consuming, and poorly explained system. The intricacies of Dragonflight professions are beyond our scope, but here’s the simplest possible explanation. In order to improve at your profession, you have to craft unique and powerful items using resources gathered in the world. To unlock the ability to craft items, you need to specialize into a skill tree by acquiring and spending Knowledge.

There’s only so much Knowledge that can be earned each week, so players are limited by the number of specialities they’re capable of learning – at least early on. Among a group of Blacksmiths, for example, some will specialize in armor crafting, some weapon crafting, and some profession gear and consumable crafting. Theoretically, this means highly-skilled specialists will have more opportunities to fulfill crafting orders for high-value gear, since they have less competition overall. But that isn’t what we’re seeing – at least, not on the public boards. This breakdown stems from the way crafting quality has been implemented.

Every item you craft has a quality rating from one to five. As you earn levels in your profession and spend Knowledge to further specialize, your skill rating will increase and the quality of the gear you create will improve. It’s not a strictly linear scale because there’s an element of randomness to crafting quality, which is further impacted by the inspiration stat that gives every craft a percentage chance to dramatically improve the item quality. Most crafters are not skilled enough to create the highest quality gear at this point in the expansion – at least not without a lucky inspiration proc. It’s not essential that the items you receive craft at the highest quality right now, since all gear can be recrafted for minimal resources later down the line – but that doesn’t stop buyers from demanding the highest quality gear possible.

Buyers are not able to submit public Crafting Orders at a specific quality, and therein lies the issue with the system. There are simply too many variables involved in crafting quality to ensure your item comes out at five-star quality. Buyers have to submit all of their own materials to the crafter, and the quality of the materials impacts the crafted quality, so the crafter can’t be held responsible for crafting a low-quality item if the buyer provides low-quality materials. There are variables on the crafter’s side too, even beyond their skill rating and chance to proc inspiration. Certain finishing reagents can be added to the recipe that lower quality in order to provide the crafter with personal benefits, like a chance to increase their skill. There’s no way to restrict the crafter from using those reagents when you submit and order, so sometimes it’s in the crafters best interest to intentionally craft lower-quality items for buyers. 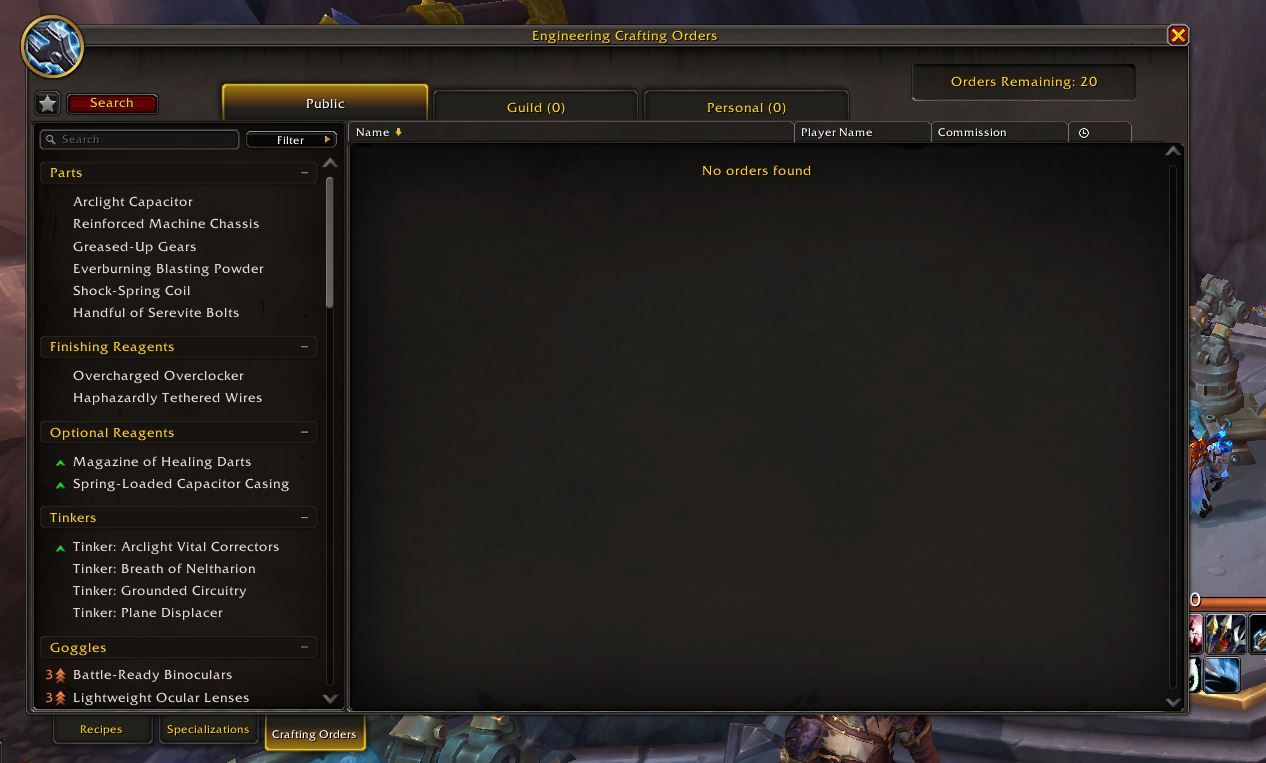 These issues don’t affect private crafting orders, however. When you make a private deal with a crafter, you can require them to make the highest quality possible, and you don’t necessarily have to provide all of your own materials, either. As a consequence, we find that the Crafting Order market – which doesn’t exist at all on the public board – is thriving in the local chat in the Dragon Isles’ major city, Valdrakken. Buyers and crafters are finding each other through the chat function and working out the specifics of deals that simply can’t be done through the public board.

This process works for some, but it’s sure to turn off many more from engaging with professions altogether. Unlike a forum or Discord server, WoW’s chat box is an archaic form of communication; an ever-flowing stream of offers, requests, memes, and often, sexism and racism. Hanging around Valdrakken spamming the chat window with requests and offers is not a lot of people’s idea of fun, and negotiating trade deals can be pretty stressful too. The crafting board should streamline and democratize the process, but as long as people only want to invest in the highest-quality gear that exists, the private market will be the only one that thrives.

Sparks of Ingenuity will be farmable eventually, and maybe then players won’t be as precious about their materials and will become more willing to submit crafting orders for sub-five star gear. It’s hard to blame people for wanting to save their materials until they can have the best gear possible. A lower cost and a better explanation of recrafting could have alleviated the problem too, but that’s the case for the entire profession system.

I don’t know if or when the public Crafting Order menu will start to populate, but for now my only option is to stand in the middle of town and shout about how great my three-star bracers are. I don’t even want to make a profit on them. I’ll even recraft them for free later on. Please, anyone, I’m begging you. I just want a job.