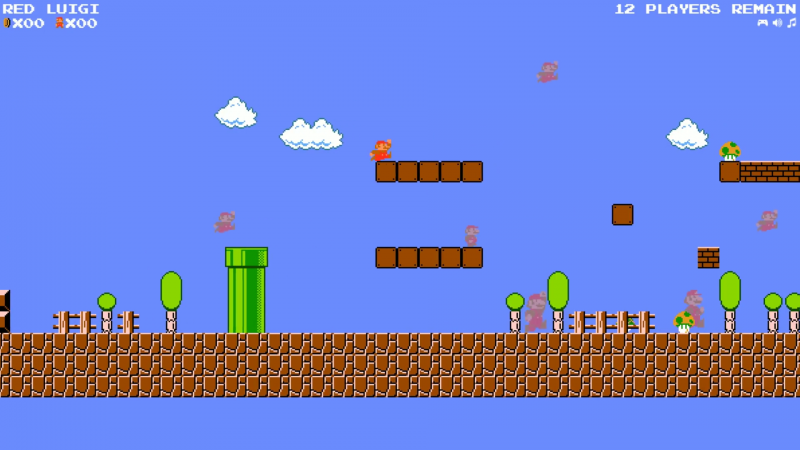 Have you played Mario Royale yet? The online game puts 76 players, all as Mario, in a Super Mario Bros. level racing to get to the end alive. Whoever gets in a top three position wins the match, everyone else falls to their death in the lava. It’s fun, barely working, and very unofficial. The game’s creator, who goes only by the screenname InfernoPlus for fairly obvious reasons, kind of revels in the weird copyright-breaking nature of the game.

However, today, InfernoPlus abruptly changed the names and graphics of the game with other developers and artists working with him. Now called Infringio Royale, the game features the sprites changed to have different colors, shapes, and accessories to avoid looking exactly like Super Mario Bros. sprites.

“Uhhhh…. It’s not pretty but hopefully it won’t get me sued,” the creator remarked on Twitter.

It’s not an entirely unexpected result. In recent years, Nintendo has gone particularly hard on fan games in the last few years. Those that use art from Nintendo series are especially often in Nintendo’s crosshairs and getting popular might as well be a direct line to Nintendo’s lawyers. Mario Royale kind of ran afoul of all of these problems and thus seemingly ended up getting a letter telling him to knock it off.

In an interview with VICE Games yesterday, InfernoPulse more or less predicted this when asked about his worst case scenario.

“That they get their legal team involved. I don’t think they’ve done that before, not going after a fan game with serious intent. They tell them to stop, but they don’t go after them. Eventually, I’m gonna get an email, for sure. In a way, it is their property. But it’s intended to be fun,” he said.

As of now, Infringio Royale is still up and running.