Crusader Kings 3 is a fantastic game. It builds on its predecessor’s successes and delivers a fully-rounded, enthralling experience. You play a medieval ruler of your choice and take control of their dynasty over 500 years. You get to make all the big decisions befitting a mighty monarch, such as which wars to declare and who to marry. You even get to make the small decisions, such as whether you pet a dog or not. Of course, you’ll pet the dog. Everyone pets the dog.

It’s easy to lose hours upon hours to the game. That’s par for the course when it comes to the grand strategy genre, but there’s more to it with Crusader Kings 3. There’s almost infinite replayability, endless roleplaying potential, and the eternal “one more year, then I’ll go to bed.” I have hundreds of hours in the game, and I’ll inevitably play hundreds more – it’s a 10/10 game, after all.

That said, when I learned that the game was being ported to consoles, I was mighty sceptical. The game's PC version relies heavily on keyboard and mouse controls and doesn’t have controller support at all. It was a relief, then, to find out that the team behind the port have focused so heavily on making the game accessible to console gamers.

Crusader Kings 3 is a menu-heavy game, and the console edition, developed by Lab42, has rebuilt those menus from the ground up. Instead of using pointers, most menus now use directional buttons for selections to feel more responsive and comfortable for anyone unfamiliar with the PC version. In addition, the shoulder buttons are linked to radial menus to free up some real estate on the world map. The left-trigger opens up a menu with links to various menus related to your character – the Culture, Faith, and Dynasty menus, for example. The right-trigger opens up a radial menu with the different map modes of the game, letting you switch between them quickly. 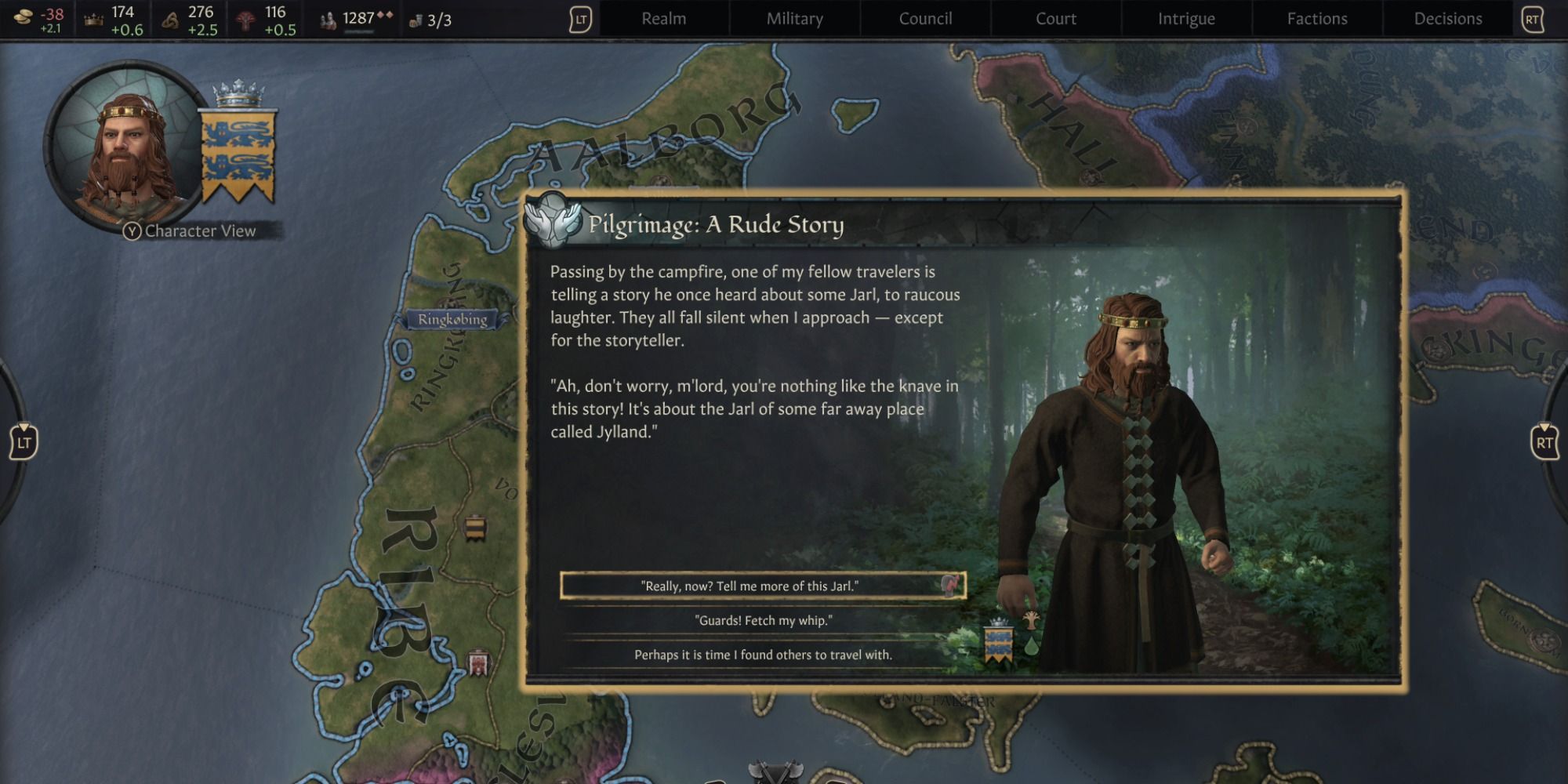 It’s not all about the control scheme, though. The port makes a few additions to the game specifically to provide more information to the player at a glance. Whenever something is going on that would be important to keep track of, you’ll now have unobtrusive shortcuts at the bottom of the screen that serve as reminders. That way, you’ll never forget about your ongoing schemes and plots or the buildings currently under construction. Another console-exclusive feature is the new stress indicator. Instead of a tiny bar that fills up as your character gets stressed, you’ll now be able to more easily tell when they’re going through it as the background of their portrait becomes red. The shoulder buttons of your controller will even resist your button presses when you’re particularly stressed – if you’re playing with the DualSense on PlayStation 5, that is.

Possibly the most exciting new feature is the ability to automate your armies – something not seen before in a map-based Paradox game. Since interacting with the map itself is one of the few things in the game that cannot be replaced with a menu, the console edition of Crusader Kings 3 will allow you to let the game’s AI handle your warfare for you instead of messing with fiddly pointers. This involves setting their behaviour – defensive, balanced, or aggressive – and then letting the computer do its thing. There’s always the option to control your armies manually, but I’m personally excited to test the AI’s capabilities out. 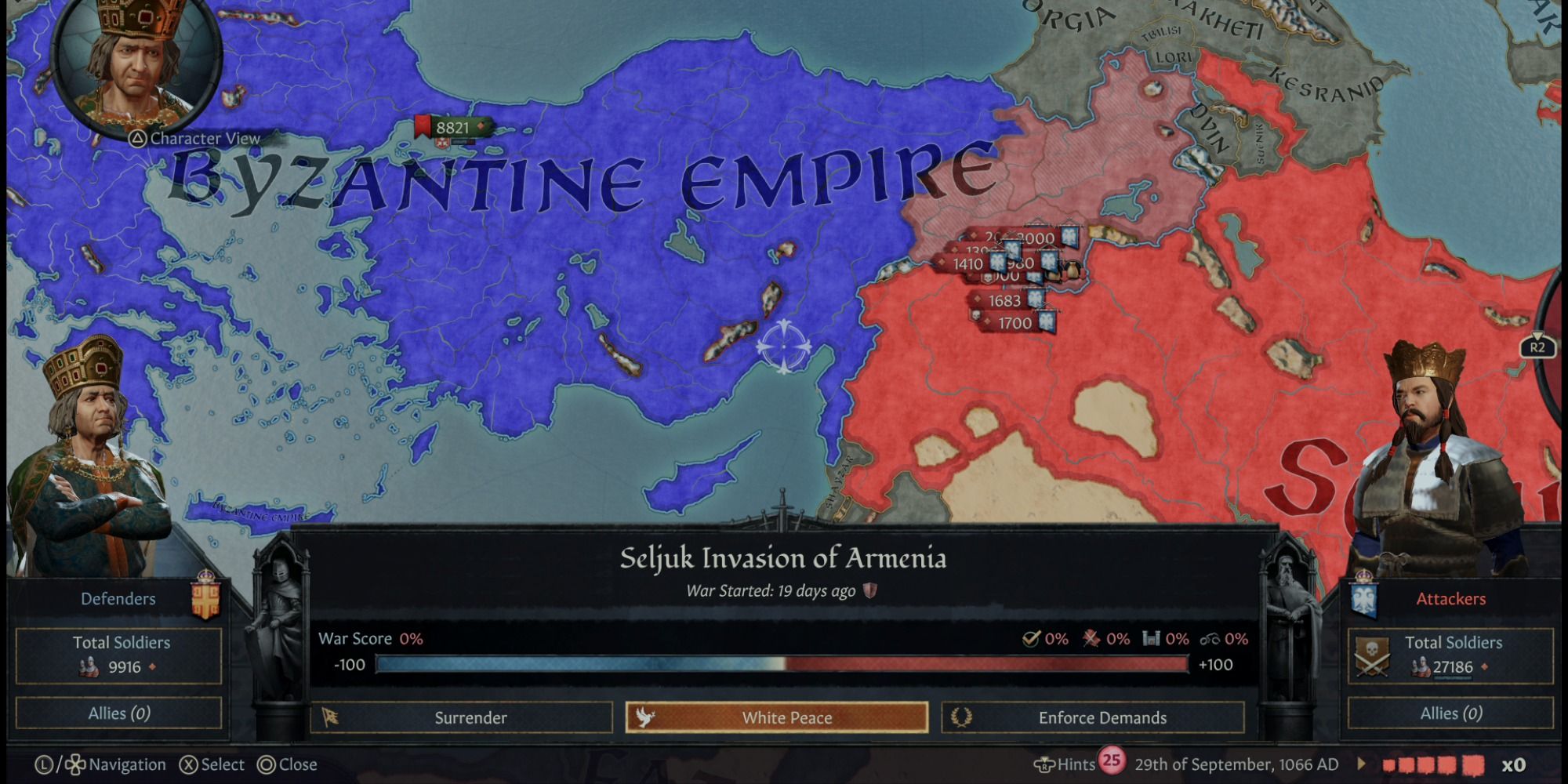 Overall, it feels like every effort has been taken to craft the perfect console port for a game that wouldn’t naturally lend itself to such a platform. Development director Simon Humphreys says, “opening [Crusader Kings 3] up to console brings us a whole new audience that don’t have these high-end PCs,” so the game is obviously designed to create a whole new swathe of fans. The developer is looking to target players who would love the game if they only had a chance to play it, and bringing it to modern consoles with the benefits of super-fast load times and seamless gameplay feels like the right direction.

It seems that every step really has been taken to ensure it plays as well as the PC version – newbies and veterans alike should feel confident that the console edition is the genuine artefact. This is solidified in Paradox’s DLC goals – it aims to release content for both versions of the game simultaneously, and while cross-play and cross-saving are not planned for release, it’s something the developer is looking at implementing if the community deems it necessary. Crusader Kings 3 on modern consoles might feel like an ambitious project and a risky one at that, but with even a hands-off preview of the game I’m impressed.

Crusader Kings 3 is set to launch on March 29 for the PlayStation 5 and Xbox Series X|S.