It’s hard to overstate how easily Cult of the Lamb sinks its claws into you. You might think you know what you’re in for – a cutesy roguelite dungeon crawler with cult management mechanics and a tongue-in-cheek, macabre sense of humour. Granted, the game is that, but it’s also much more. Cult of the Lamb is a masterclass in satisfying game design choices.

The game begins with the sacrificial lamb (that’s you!) being, well, sacrificed. In one of the eeriest opening sequences in recent memory, you’re forced to trudge forwards to the place you’ll meet your doom. One thing leads to another, and you’re saved by a mysterious, chained figure called The One Who Waits, who had been imprisoned by the Bishops of the Old Faith, the very same monsters who sacrificed you. Thus, you’re given your objective – hunt down the Bishops of the Old Faith and release The One Who Waits from bondage. To do this, you’ll need to dive into dungeons and raise a mighty legion of cultists who will empower you through their faith.

Cult of the Lamb’s mechanics will feel familiar to most players. The fast-paced, dodge-heavy combat is reminiscent of Hades, the adorable cast of critters and cult customisation options lend themselves to Animal Crossing comparisons, and the dungeons themselves will remind genre fans of The Binding of Isaac. Cult of the Lamb doesn’t do anything groundbreaking, but it sets itself apart from other games by doing everything with flair, style, and a deliberate precision that belies any implication that it doesn’t know exactly what it’s doing or wants to be.

Combat is fluid and satisfying. No matter which weapon you pick up, you’re sure to have a fun time wading through entire hordes of enemies. You receive upgrades in the form of tarot cards, and most of these are palpable boosts, so they’re worth seeking out. In addition to your weapon, there are multiple special abilities you can pick up, similar to the Casts of Hades. These range from barrages of enemy-seeking darts to explosions that push enemies away from you – and they all feel satisfying to use. The game has a relatively shallow collection of combat tools, but it seems to use this to its advantage. As things grow more challenging, you’re forced to rely on the fundamentals to survive, such as dodging and knowing exactly when to attack alongside learning the layout of specific rooms and attacks of enemies. It’s all about learning.

When you’re not fighting through Cult of the Lamb’s four dungeons, you’re managing your cult. You’re handed a very large field at the beginning of the game, and spend a great deal of time clearing the trees and rocks before building your cult from nothing. This isn’t a full-blown colony sim, but there are obvious inspirations. Cultists can be put to work on farms, in resource-gathering buildings, or forced to worship you, earning you precious Divine Inspiration that can be spent to unlock new buildings and upgrades. Aside from improving the cult, you’ll also unlock new areas as you explore the dungeons, meeting interesting NPCs who provide various quests that break up the gameplay cycle. I loved that you have a wide range of decorations to beautify your cult, and these have a mechanical effect, too – the prettier your cult, the happier your cultists will stay.

As your cult grows, you’ll have to learn how to manage its overall faith level, as well as its cleanliness and hunger. In the early game, this boils down to cleaning up followers’ waste and vomit, and creating disgusting meals out of grass until you unlock the ability to farm more palatable fare. Some of your daily tasks can eventually be automated, but not all of them, meaning there’s always something that you have to do, adding a fun element of pressure. Sometimes you may be forced to choose between leaving a dungeon to go feed a starving cultist or pressing on to beat a boss. Returning to the cult, triumphant in victory, only to find the corpse of your favourite adorable bunny cultist is a bittersweet feeling.

Combat and cult management make up two halves of the gameplay loop. Every run through a dungeon takes around ten minutes, give or take, and by the time you return to your cult, the jobs list will have filled up. It’s impressive how finely-tuned the game seems – a dungeon run never takes so much time that everything goes to hell, but you’ll be put under quite a bit of pressure until you’re far enough in to buy some of the more useful quality of life upgrades. This attention to detail can be felt with the upgrades themselves – playing normally, you’ll reach full power around about the same time you’re ready to face off against the final boss, which makes the climax all the more exciting. It’s the culmination of all your efforts and time to let rip.

At its core, Cult of the Lamb’s design philosophy is to make you feel powerful. Whether it be power in oneself, power over others, or the power to forge your own destiny, the game drips with power fantasies. The screen shakes as showers of red explode out of fallen enemies, turning every dungeon run into a violent, bloody romp. There are a multitude of ways to exert power over your cultists, tempting you with tyranny whenever you open up the interaction menu. Everything you can do serves as a reminder that you wield true power, and the game is kind enough to let you use it however you wish. 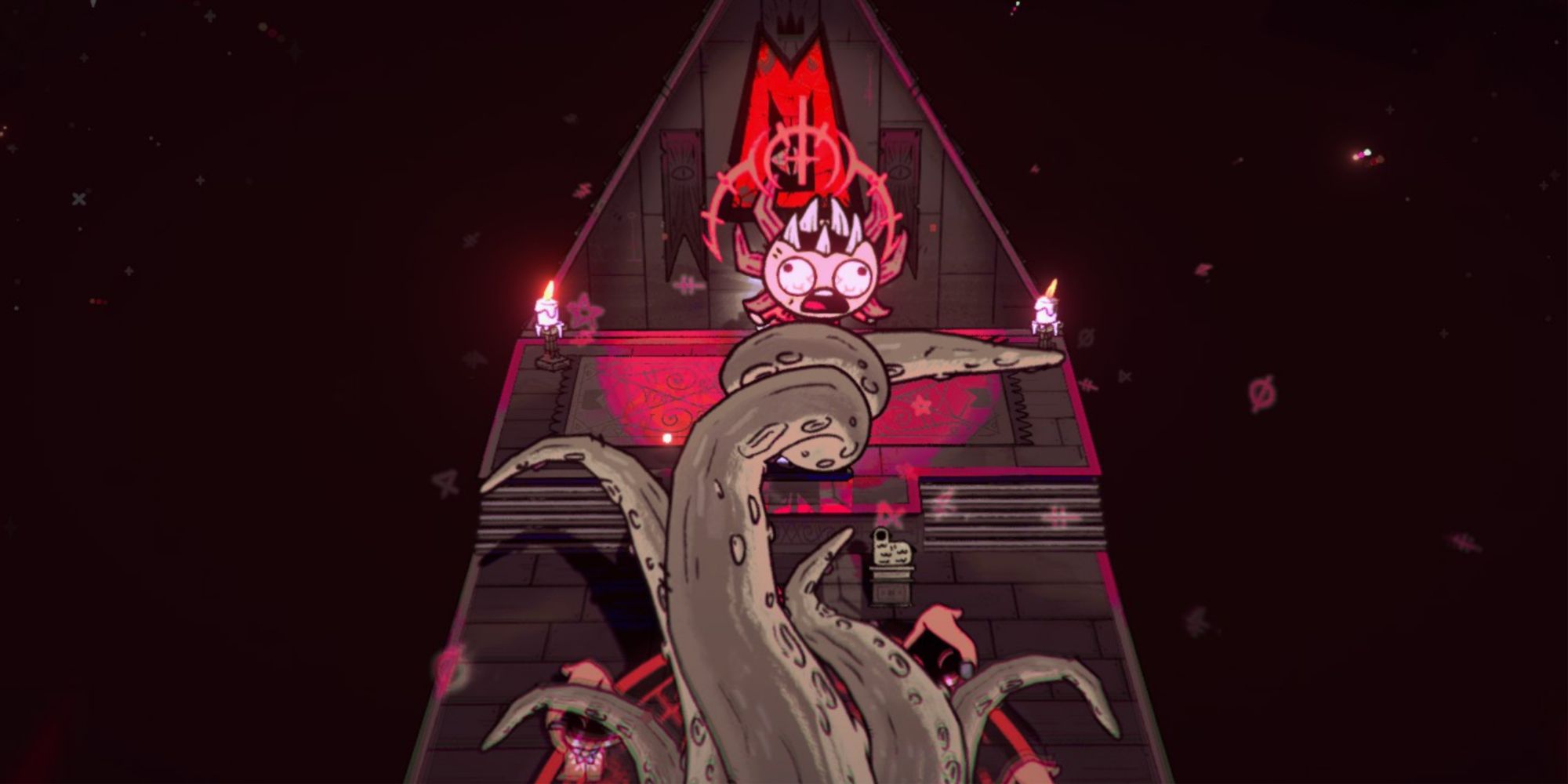 Something I really appreciated about Cult of the Lamb is how the design choices work so well together. It would be easy for a game like this to feel cheesy or on the wrong side of edgy – with the wrong direction, it could feel like a Happy Tree Friends game. Instead, the dichotomy between the adorably goofy presentation and the grotesque subject matter serves to make the game more compelling. The inspirations are clear – you’ll find tentacles abound when sacrificing cultists, the dungeon of Anchordeep feels very Innsmouth, and the general bastardisation of western religion doesn’t feel heavy-handed – but they are not overused. Eldritch and Lovecraftian tropes are somewhat de rigueur at the moment, so seeing them presented in such a fresh manner gives Cult of the Lamb a unique selling point. It’s something new.

In my 15 hours with the game, I found very little to complain about. The only things that come to mind are the inability to rechallenge the final boss and the relative lack of a postgame. When your only complaint is that you want more, there really isn’t much to fix. Some players may feel frustrated with certain quests, but those are easily solved with just a little effort and exploration, so any frustrations are short-lived.

I can easily see Cult of the Lamb becoming one of the next indie darlings, and it would be utterly deserving of the epithet. It’s a blend of elements that, by rights, shouldn’t really work, but Massive Monster executed it with aplomb. The game lures you in with a lush and lurid art style and the promise of action-packing combat, and then indoctrinates you with a gameplay loop that keeps you coming back for more. I, for one, would follow the Lamb to the ends of the earth.

Score: 5/5. A review code for PC was provided by the publisher.