Driller is one of the beefier dwarves to choose in Deep Rock Galactic, runner up being the Gunner. His weapons aren't necessarily for mobility and agility like Scout's loadout, but rather for accessibility and problem-solving.

Playing as Driller means skipping tedious steps and diving headfirst into action. Each map you play on is procedurally generated, meaning some problems are better solved with a large power drill while others may just need someone who's speedy, depending on the RNG. This guide details Driller's basic loadout and what you should focus on more when playing as this Deep Rock Galactic class. 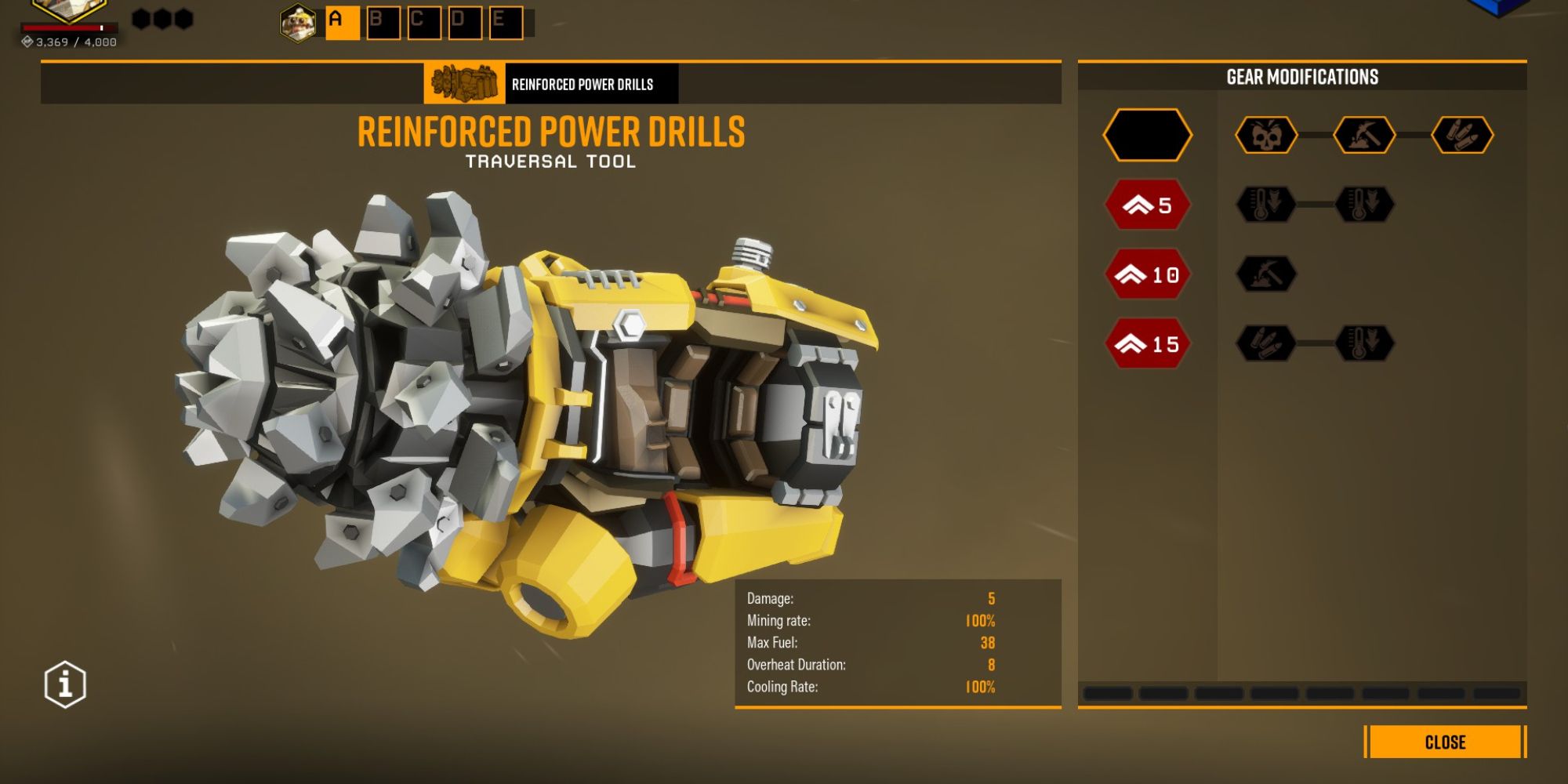 Driller's Power Drills allow him to dig a dwarf-shaped hole or tunnel through any wall. All you have to do is aim towards the ceiling, floor, or walls and start drilling. Power Drills are fast and more effective than using your regular pickaxe. When digging through soft dirt to reach another portion of the map, your pickaxe will do. Power Drills are for when you're trying to access an area that requires thinking.

For instance, a teammate could be lost or you may not know how to get back to the drop pod. By using your map, you can see where your teammate or drop pod is. Finding a path to them may be difficult, so drilling through the wall and creating a straight path to your objective is the best option.

There is a lot of each map to explore, especially when you're trying to complete side objectives. You could spend all day mining and tearing apart each cave you enter. Power Drills allow you to skip the tedious exploration of finding the next cave or way out. You can get to where you need to go at a greater speed. This also allows you to be the leader of your team. While the rest of your squad is searching for side objectives and exploring the caves, you can find the main objective and pathways to take next. Creating shortcuts with the Power Drills allows you to support your teammates.

Benefits of The Power Drills

The Best Weapons For Driller 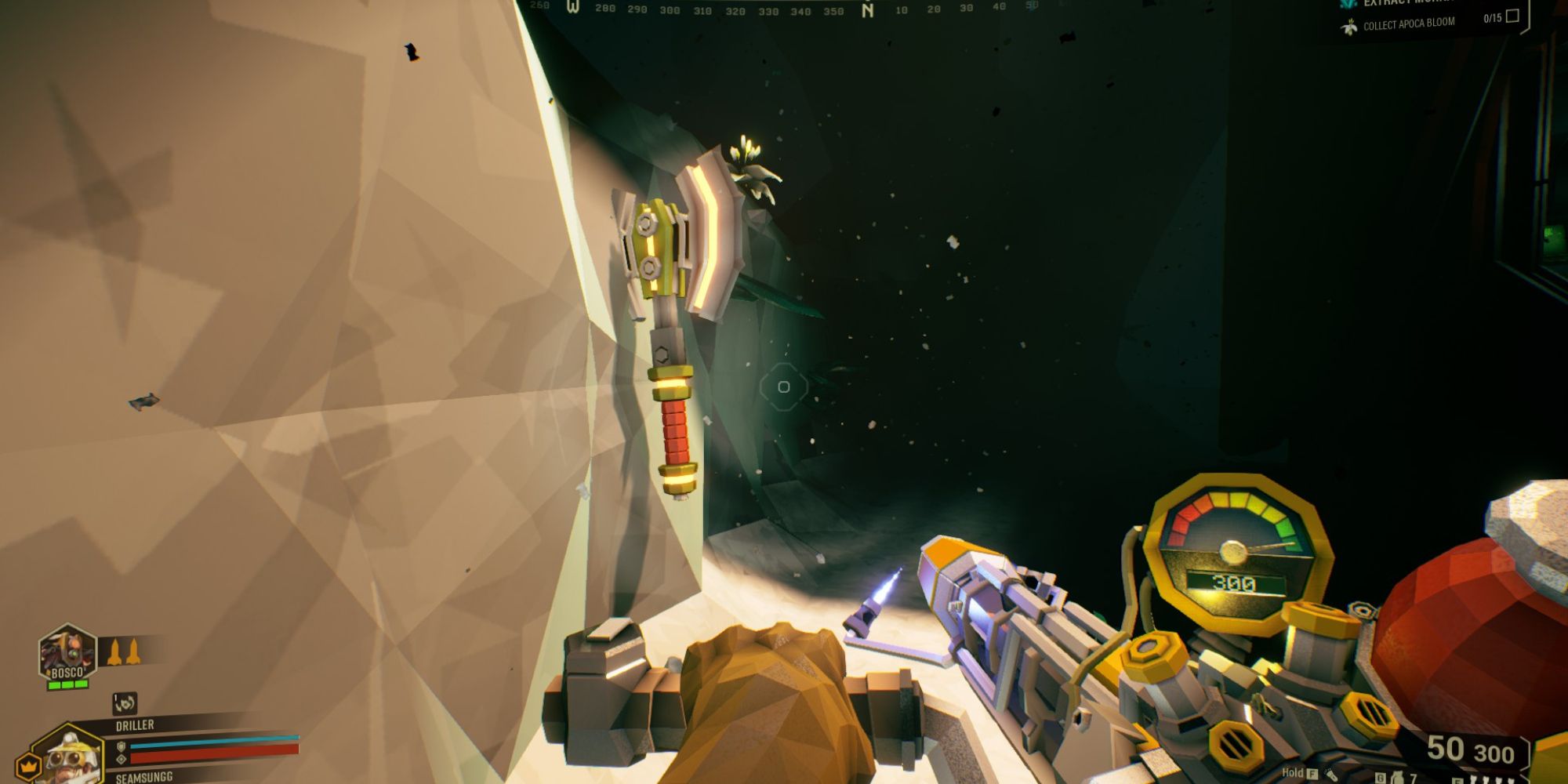 The Driller's default loadout is the CRSPR Flamethrower, Subata 120, and the Impact Axe. The Subata 120 is a small and simple pistol. The Impact Axe is a throwable axe with AOE damage. By leveling up your Driller's equipment and completing Assignments, you can unlock more weapons. These weapons include a Cryo Cannon, Corrosive Sludge Pump, Experimental Plasma Charger, High Explosive Grenade, and Neurotoxin Grenade.

The Cryo Cannon is the most powerful primary weapon for Driller in terms of productivity. The Cryo Cannon allows you to freeze multiple enemies at once. During waves, this can be a lifesaver if everyone is low health or someone needs to be revived. When flying enemies are causing an issue, freezing them makes them drop to the floor in which they shatter and die on their own. The Scout has a similar tool to this, the Cryo Grenade, which is equally as useful for the same reasons.

For secondary guns, the best option is the Experimental Plasma Charger. This is a plasma-firing pistol with a fast rate of fire, helpful for taking down waves of enemies. The big benefit to using this pistol over the Subata 120 is its charged ability. When charging up an attack using the Experimental Plasma Charger, you create an explosive round that will destroy the environment as well as enemies. This is extremely useful for manipulating the environment more than staying alive. By exploding walls, you can collect ore that was once attached to it in large quantities, rather than mining it slowly.

The Impact Axe is a grenade in disguise. It's a sticky grenade that can detonate once attached to an enemy. The Impact Axe allows for precise attacks on important enemies. The Driller's High Explosive Grenade is a regular grenade with great power. The Neurotoxin Grenade is the most productive and experimental throwable you can get as the Driller. With the Neurotoxin Grenade, you can combine weapons to create a mass explosion. This grenade releases toxic gas into the air that will only affect enemies. Combing this gas with your CRSPR Flamethrower will create a ginormous explosion.

The Best Perks To Use As Driller 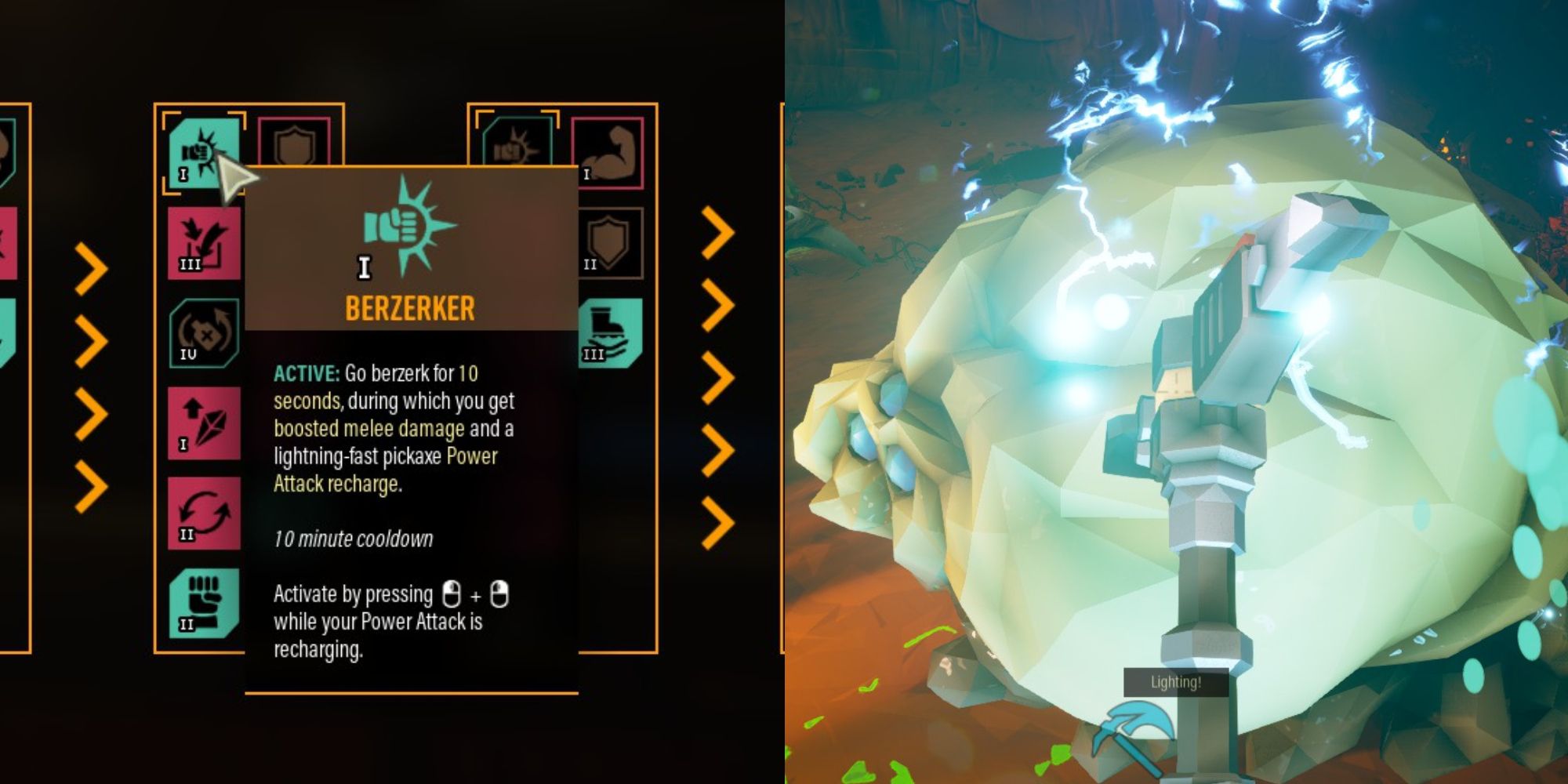 There are over 20 different perks you can unlock in Deep Rock Galactic. Each perk has its pros and cons and is more useful with different load-outs and characters. Perks are unlocked by spending Perk Points. Perk Points are earned by completing Milestones at the personal terminal in your bunk room, located on the Space Rig. Milestones are tasks like harvesting six alien eggs in a specific biome. Once you purchase Perks, you must equip them at the Equipment terminal.

The Friendly Perk makes it so that friendly fire is a non-issue. This is important to have as Driller if your team is reliant on your tunnel systems. Though digging with the Power Drills creates more walking space than a pickaxe would, it can still get crowded. If your entire team is following you inside these tunnels and there's a horde coming your way, you're gonna wanna make sure friendly fire is the least of your problems. The Friendly perk makes it so that anyone participating in friendly fire takes and deals 50% less damage.

Berzerker makes your pickaxe more useful, especially as Driller when you're using your Power Drills more than the latter. With this perk, you can do a power attack with your pickaxe. This will be useful as Driller due to being stuck in small spaces. When digging in your tunnels, you'll be bombarded with multiple enemies, and having a quick attack like that will save you time and health.

For the same reason the previous perks are useful, Shield Link will allow your team to withstand hordes entering Power Drill tunnels. Shield Link recharges your teammate's shields up to 50% faster when you are near each other. 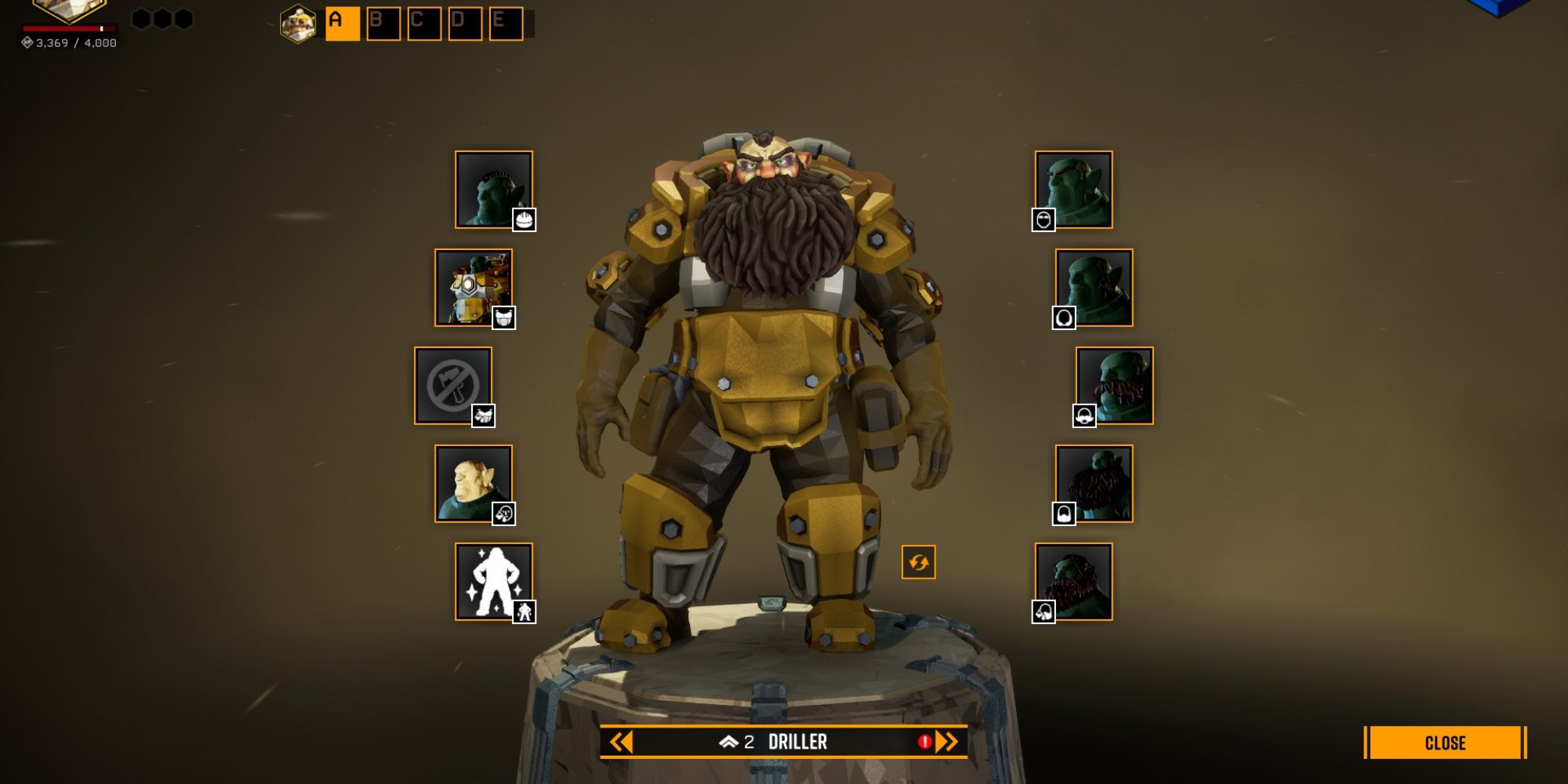 Driller is most useful for avoiding complicated routes and going straight to the source. You're able to reach people or objectives that are in entirely different areas of the map with more ease than any other class. Driller's weapons hit hard and are able to damage groups of enemies. Overall, he can collectively hurt more enemies and reach long objectives the best.