Destiny 2’s Season of the Haunted is off to a great start, but I can’t help but feel like something is missing. The return of the (now derelict) Leviathan was a welcome surprise for long-time fans, and the opportunity to craft four of the most beloved weapons (including Beloved) from Season of Opulence is driving a lot of the excitement for the season. But all of this nostalgia has also reminded me of a significant piece of Destiny content that’s been missing for quite some time. With Bungie putting a greater emphasis on build crafting than ever before, we need a new Tribute Hall, now more than ever.

Season of Opulence’s Tribute Hall was an interactive firing range and weapon testing room that made experimenting with loadouts a breeze. It was a private space where fireteams could go to infinitely summon enemies and practice killing them with different strategies, and for a time it was the most valuable tool in the game. You can see it, in fact, during the opening of the new dungeon, Duality. As a static space with limited variables, players could easily collect data, compare notes, and find new, optimal strategies. It took so much of the guesswork out of build crafting and accelerated the speed at which metas were established. When Shadowkeep launched we lost the Tribute Hall, and there hasn’t been a real replacement for it yet.

We got a new firing range of sorts this year, but it hardly compares. Down behind the weapon crafting relic at the Enclave is a tunnel of floating plates that takes damage when you shoot them. This space is not without its uses. If you need to test out a weapon’s range, reload, or stability, this is a great firing range. But there’s a lot more to Destiny’s damage calculus than weapon damage, and the Enclave’s shooting range isn’t equipped for actual testing. 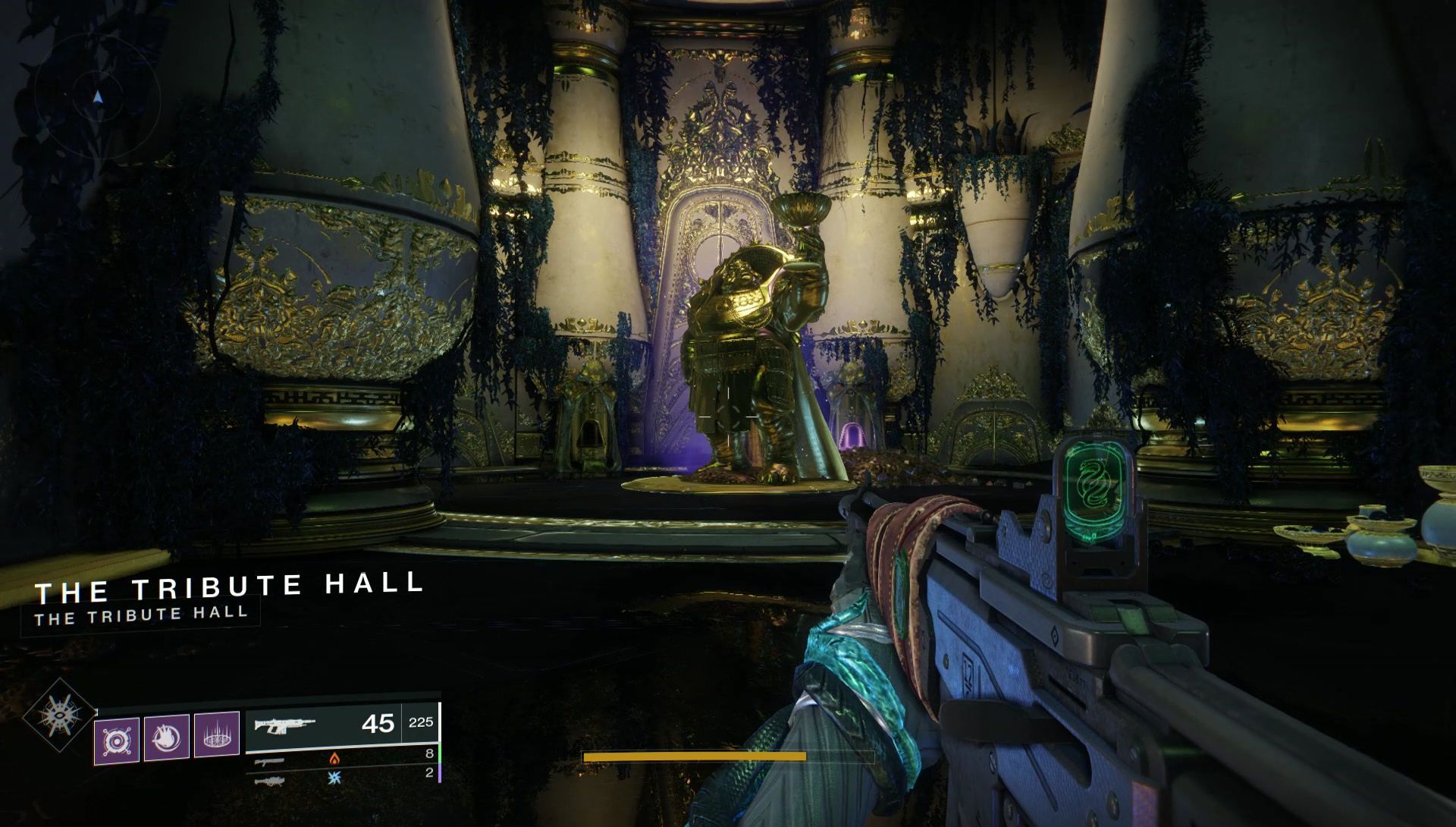 It’s been over two years since the Tribute Hall was vaulted, and the need for a new one has only grown. Both Void and Solar 3.0 have evolved and complicated character builds in a number of ways including new damage-based status effects like Weaken, Volatile, Radiant, and Scorch, as well as dozens of Aspects and Fragments that enhance abilities, affect stats and cooldowns, and create synergies between each buff and debuff. Switching abilities, Aspects, and Fragments is simple, but understanding how they’re all working together takes a lot of testing and patience – particularly without a place to practice.

The return of Calus and his arsenal of Opulent weapons this season exacerbates the sting of losing the Tribute Hall, even years later. We need a space where we can test how much damage Radiant does to a Weakened enemy while multiple weapon traits and mod boosts like Golden Tricorn and Font of Might are active. As we found last season, not all buffs stack with each other. Is High Energy Fire better than applying Weakened? Will Font of Might stack with Lucky Pants? We need a better way to test these questions.

I don’t think that Bungie is trying to slow down our weapon testing, as some have suggested. There are too many people putting the hard work in already on Twitch and YouTube and if there’s a bug or broken interaction, players are going to find it regardless. A new Tribute Hall would give people a way to efficiently do the testing themselves without needing to rely on a handful of YouTubers to do the work for them. I just don’t think remaking the Tribute Hall is a priority for Bungie when things like Iron Banner and PvP maps have needed updates for so much longer. But with the final subclass update coming next season, a new Tribute Hall would make a huge difference.