Destiny 2’s new seasonal activity in Season of the Splicer, called Override, will likely be familiar to anyone who has been playing the game in the last year. Override borrows from a few different public events, including Contact from Season of Arrivals, Battlegrounds from Season of the Chosen, and even Wrathborn Hunts from Season of the Hunt. While Override is familiar in a lot of ways, but it has quite a few unique twists and original ideas as well. If you’re struggling to wrap your mind around all the moving pieces in the Override activity, here is our comprehensive guide to successfully completing every mission.

There are three unique Override activities that can be found on Europa, the Moon, and the Tangled Shore, but the Moon and Tangled Shore activity won’t be available until later in the season. If these activities are significantly different from the currently available version of Override on Europa, this guide will be updated accordingly. Additionaly, there’s a chance the undescribed Weekly Pinnacle Mission will somehow tie into the Override activity. If this the case, we’ll link this guide to a seperate guide about the mission. For now, we’re going to focus on the Override: Europa activity.

Override: Europa is a 6-player matchmade activity that can be launched from an blue icon located on the left side of the H.E.L.M. map in the director. You can play this activity with a group of six, but if you have less than six in your fireteam the activity will automatically fill the empty slots with other players. Additionally, you’ll need to progress through the two introductory missions for Season of the Splicer before you can start playing this activity. If you’re having trouble finding Mithrax in the Last City, we’ve got a guide to help you track him down.

The activity is broken up into three separate encounters. If you played the Contact public event during Season of Arrivals, you’ll have a pretty good idea of what to do during the first encounter.

You’ll find a deposit site in the middle of the map just as enemies start to spawn all around. Every enemy you defeat will leave behind a purple Data Spike. These Data Spikes function just like the motes in Gambit and Contact. You’ll Need to collect motes and deposit them into the Vex pillar in the center. Every deposit you make will move the progress bar on the left side of your screen forward, and the entire team will need to work together to deposit as many motes as possible as quickly as they can.

The Vex pillar will lock down and prevent you from making deposits at the at around one-third complete, two-thirds complete, and when you make the final deposit. When this happens you’ll have two objectives: kill the champions that spawn, and shoot the red Vex constructs that appear around the deposit site. Your team should try to stand near the deposit site so you can see the see when the red symbols appear.

Once you’ve cleared the champions and shot all the red symbols, platforms will start to appear around the tower. One person from your team needs to platform all the way up to the top of the tower and interact with it from the highest platform to hack the tower and reset it for the next wave. Once this is complete you can go back to depositing Data Spikes. After the third round you can move onto the next encounter.

This is a fairly straightforward platforming section, but there are some things to keep in mind as you make your way through this section. Each version of this section is a little bit different, so you’ll need to try to react on the fly as you rush through to the other side.

While the path forward is fairly linear, you’ll encounter a number of obstacles along the path. First of all, you’ll need to keep an eye out for spinning lasers and moving wall defenses, as the former will kill you instantly if you get caught in them and the latter will spawn enemies that chase you. It’s worth noting that there is an upgrade path in the Splicer Servitor vendor that you can invest in to reduce the amount of damage you take from these obstacles if you’re having trouble making it through this section.

The other thing to watch out for is the steep ramps. These ramps give you a ton of momentum to help you clear the encounter quickly, but they can also get you moving so fast that you might smash into a wall and die. Make it through here as fast as you can (or wait for the rest of your team to do it for you so you get pulled forward) and you can start the third and final encounter.

The third encounter is the boss room and probably the most complex encounter out of the three. The boss is a Wyvern-type enemy named Tacitas, Subjugated Mind, that will leap at you from a distance and hit you with devastating attacks if you’re not careful. Work with your team to damage the boss until it retweets into the center white column where it can’t be damaged. 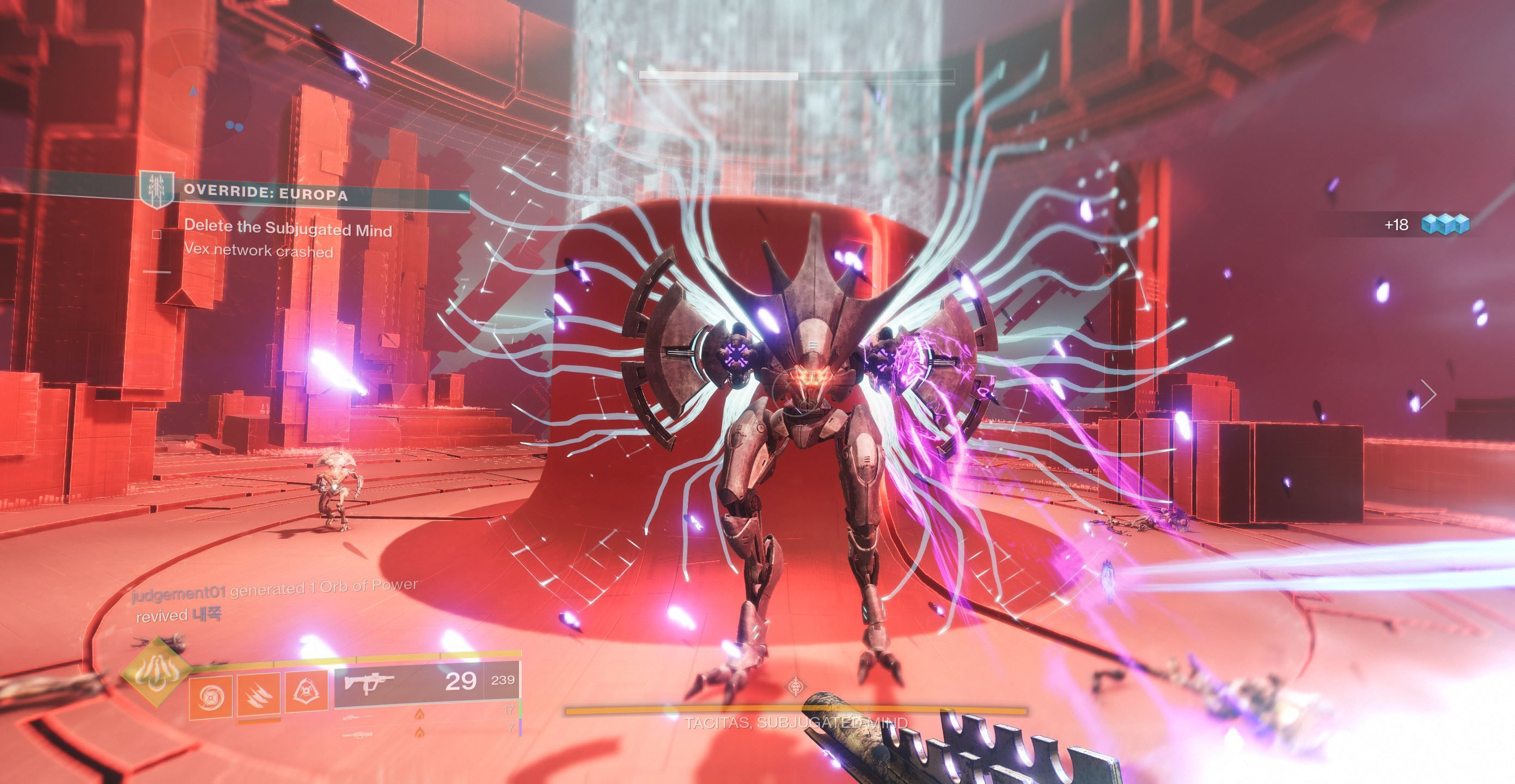 At this point, everyone needs to keep a lookout for a special enemy called the Scytal. You won’t be able to fight the boss until the Scytal is dispatched, so turn your focus towards this enemy as soon as it spawns.

Upon defeat, the Scytal will drop an orb that must be carried to the Vex tower at the front of the room (you passed it on the way in). Deposit the orb to remove the forcefield from the white Vex cubes that are channeling towards Tacitas at the center of the room. All you need to do is shoot these cubes and Tacitas will jump back down so you can keep fighting. 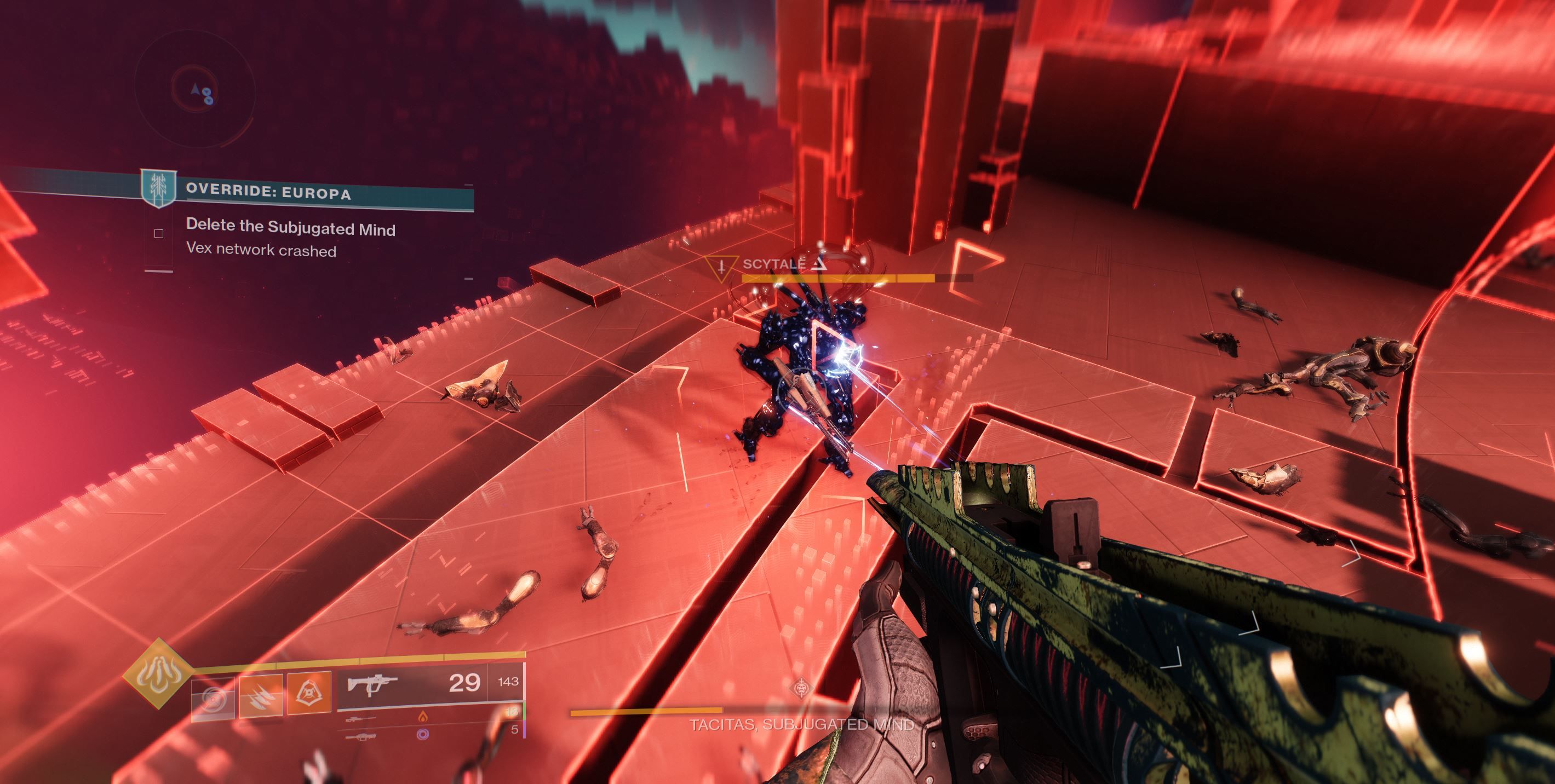 Depending on the power level of your team, you may need to repeat this process once or twice before Tacitas is finally defeated. When it’s dead, you’ll be rewarded with a Vex Chest and a Conflux Chest which can be opened with a Key Code from your Splicer Gauntlet.