The Ghosts is one of the hardest missions in the Witch Queen campaign for Destiny 2. Guardians will need to fight the third and final type of Lightbearer, destroy an army of Scorn, and defeat a Baron to finish this mission. It's a serious challenge on Legendary and a test of patience on Master.

Fortunately, there are a few strategies and cheese tactics to make this mission easier. In this walkthrough, we'll cover the modifiers and enemies you can expect, recommend loadouts to accommodate this mission's encounters, and give a thorough breakdown of each encounter. Bring a good Void weapon, and get ready to test your patience against one of the toughest bosses this campaign has to offer. 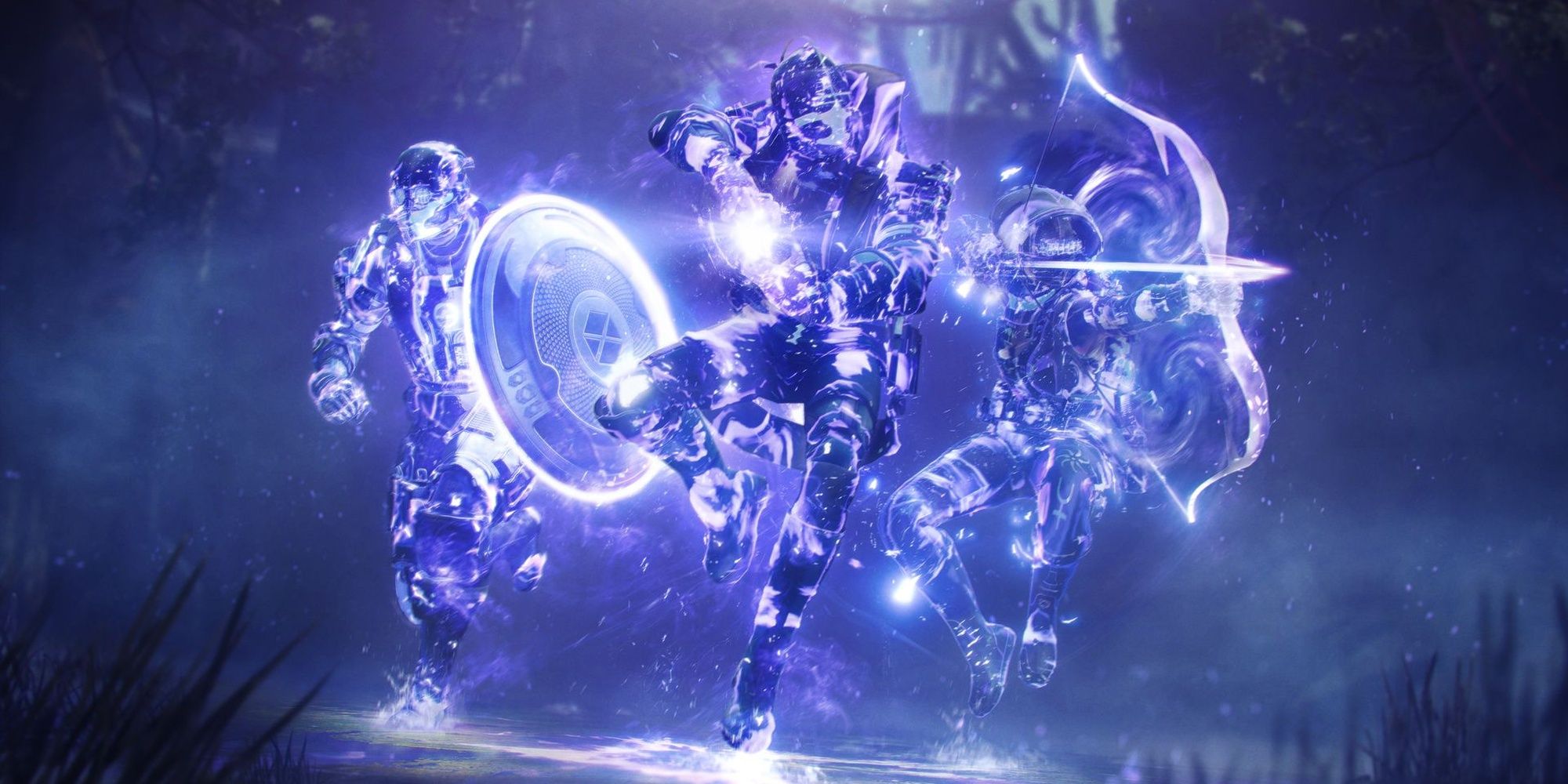 Legendary on this mission includes the Empath modifier, causing enemies to deal much more melee damage. Since Chaff is active, the enhanced radar from Empath is disabled. Beyond that, this mission has the same modifiers as all other Witch Queen campaign levels at this difficulty.

Master difficulty is nothing short of brutal. All shield types are present, Champions are in just about every encounter, and the Attrition modifier makes aggressive play downright impossible. You'll need to be patient to beat this mission, especially the final encounter. Spec for long-range weapons, and bring a Void weapon.

Hunters should use Nightstalker for this mission. Most of the encounters in this mission involve dozens of enemies and lots of moving. Invisibility will save your skin multiple times throughout your run, especially during the final encounter. You can get away with using Revenant with Assassin's Cowl on Legendary, but we don't recommend using it for Master difficulty; there are too many enemies to play that aggressively.

Titans are going to have a hard time in this mission, although we find Sentinel to be the best spec. Overshields are fantastic for absorbing a few hits, and detonators are simply absurd for killing adds. Even with your great ability and detonator uptime, we still recommend you take this mission slowly—especially on Master.

Warlocks can't go wrong with Voidwalker. Instead of going all-in on aggression, we recommend a more reserved approach with Chaos Accelerant. Overcharge your Vortex Grenades, use the Contraverse Hold Exotic, and melt any enemy that gets caught in the AoE. Pair this with your favorite Void weapon—Le Monarque is a great pick—and you should be able to clear this mission without many problems.

Le Monarque and its Legendary cousin, Under Your Skin, are fantastic for killing enemies at a distance. Use Anti-Barrier Rounds with either Bow; they bypass the Scorn Tank's energy field when its core is exposed, making that section far easier.

Rat King is actually a good pick here. There are so many fodder enemies in close range that you can easily get a kill, allowing you to turn invisible and reposition. Consider using this is you're struggling to stay alive. We don't recommend using this on Master since enemies are much tougher, but feel free to give it a try.

Witherhoard does a little bit of everything. It's ammo efficient, kills adds with ease, and it can chip away at boss health while you're running to safety.

Rocket Launchers are fantastic for this mission. Tons of enemies and burst-oriented boss fights make this archetype shine. If you have an Exotic slot open. Deathbringer and Gjallarhorn are tough to beat. If not, Palmyra-B and Red Herring can both be crafted and deal solid DPS. If you need more DPS, consider using a Linear Fusion Rifle. 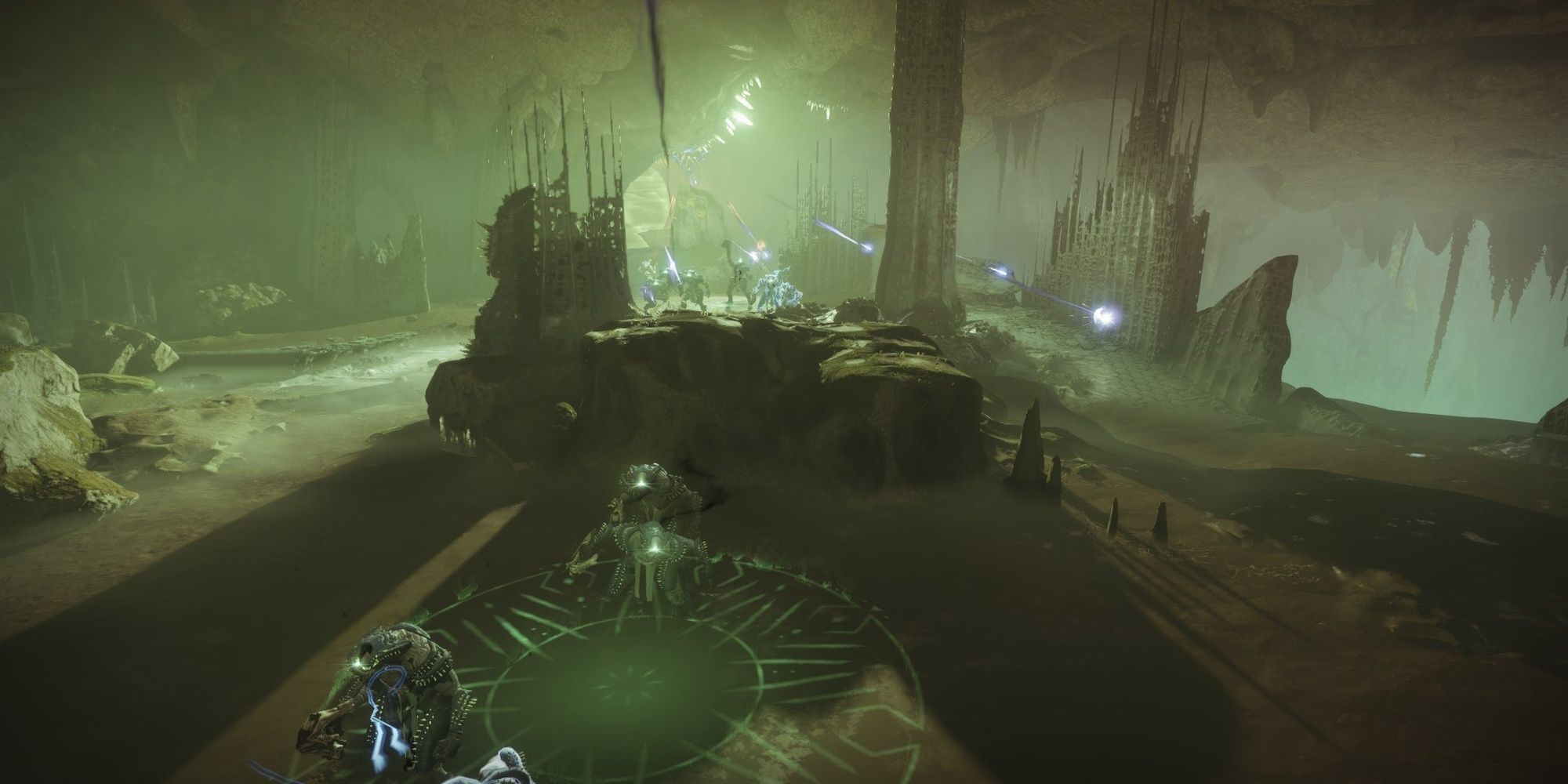 You'll spawn just outside a heavily-fortified cave. Make your way towards the cave, sticking to cover on your way down. Beyond the traditional Acolyte fodder enemies, you'll have to kill a Lucent Lightbearer and Shrieker to proceed. Kill the Shrieker first, then work on the Acolytes while keeping your distance from the Light-wielding Hive. This Lightbearer is a Wizard, utilizing the Stormtrance Super, Lightning Grenades, and Healing Rifts.

When dealing with the Wizard, you'll want to either suppress them or quickly burst them down with your Heavy weapon. If the Wizard pops their Super, immediately find cover; do not fight them. Despite having a short-range Super, Lucent Wizards won't chase you. Kill the Wizard, crush their Ghost, then proceed further into the cave. 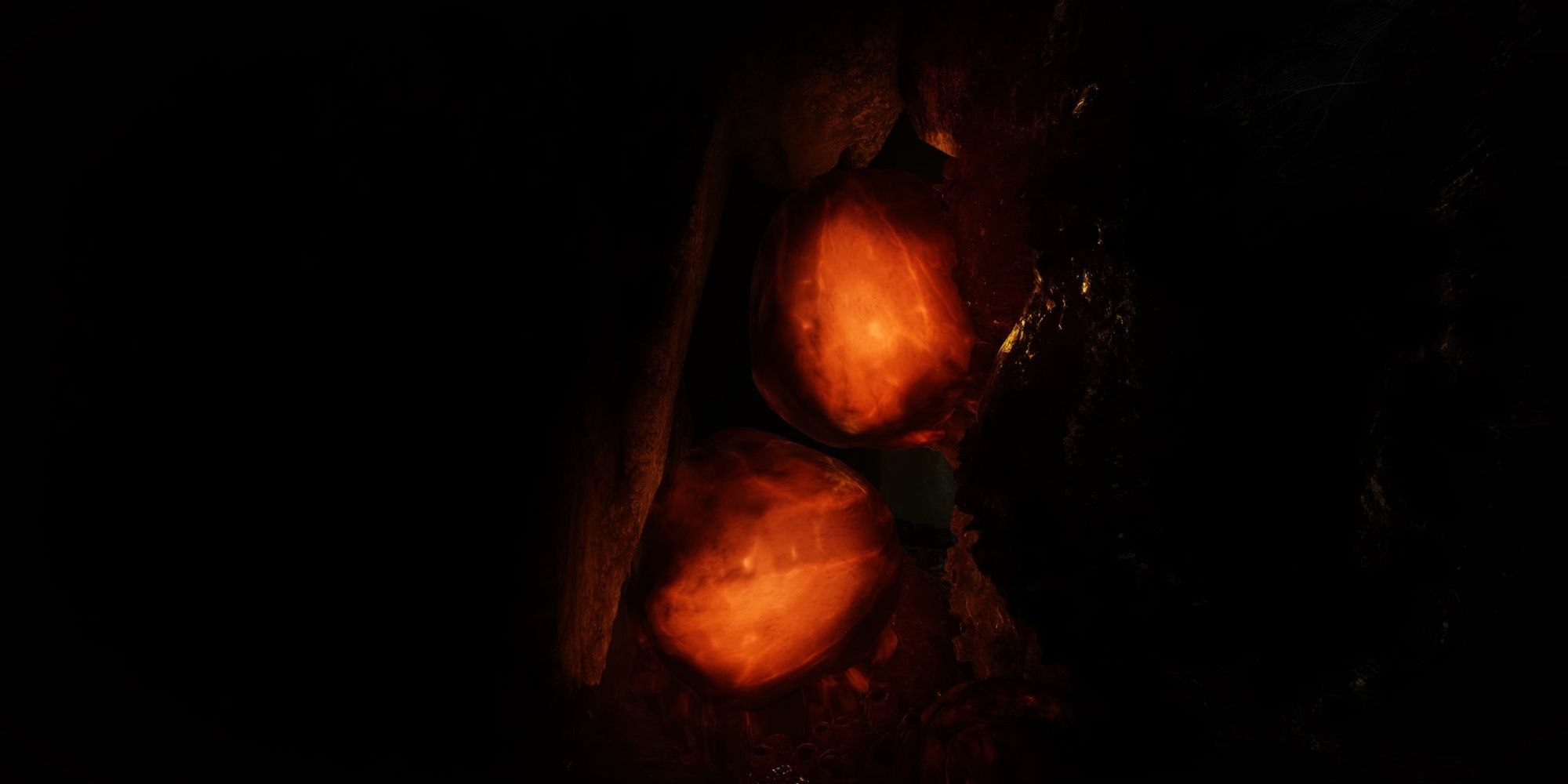 Most rooms will contain orange puss sacks that can be shot at, illuminating the area. If you enter a dimly lit room, shoot any orange sacks on the wall. They also blind nearby enemies when destroyed.

Temple Of The Wrathful Encounter 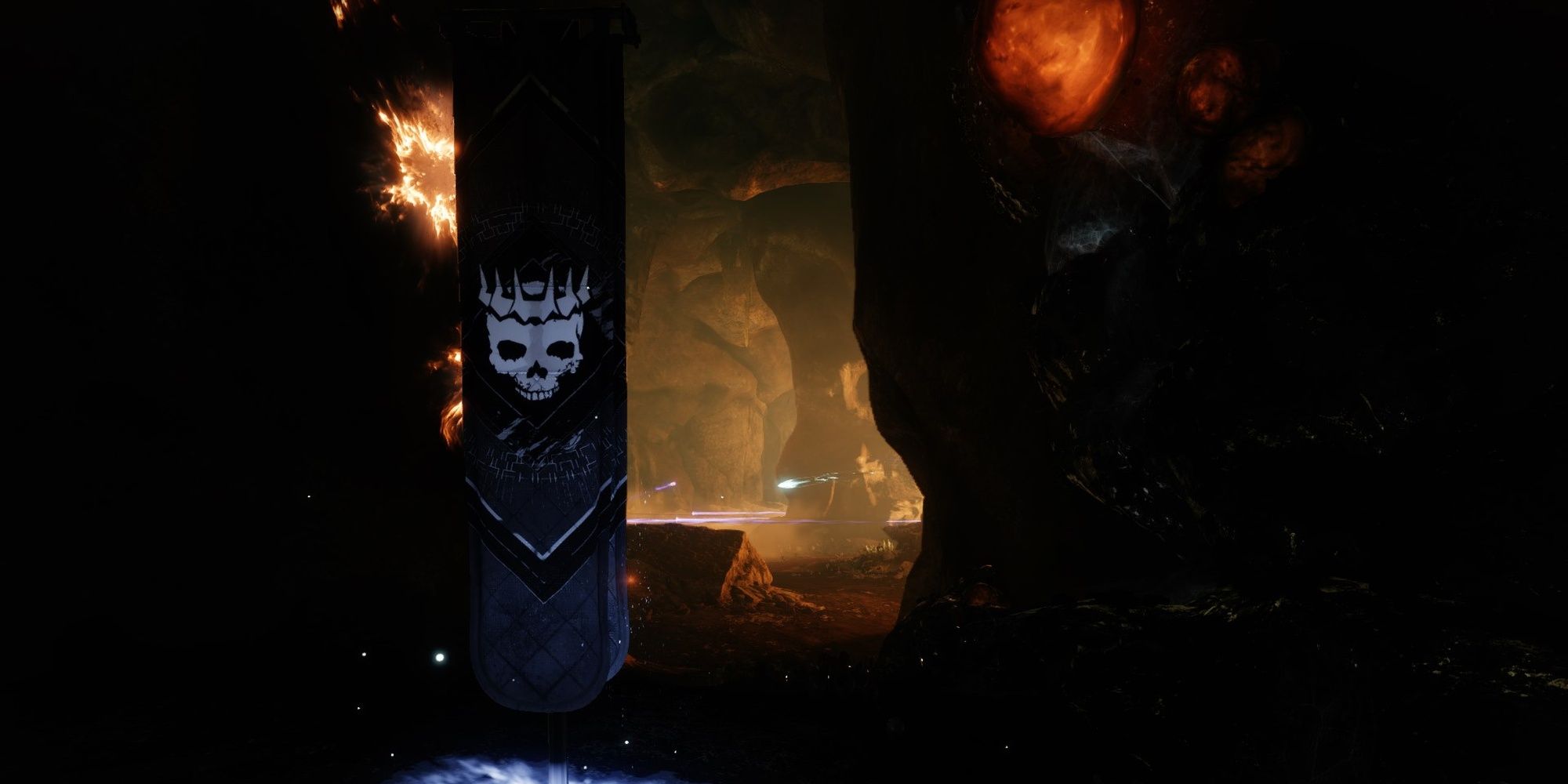 Right after you rally the nearby encounter flag, kill the Scorn enemies to your left. One of them will be a Chieftain with a Void shield. Kill this enemy as soon as you can, as their totems can make nearby Scorn invincible. With those enemies dealt with, a Lucent Lightbearer will spawn to the left or right of a nearby Hive pillar. This Lightbearer is an Acolyte that shares the Hunter's Middle Tree Gunslinger kit. They can dodge, throw Swarm Grenades, and their Super allows them to cast Blade Barrage every time they dodge. The Lightbearer is incredibly dangerous and should be killed as soon as possible. If it pops its Super, find cover immediately.

If you're fast enough, you should be able to kill the first Lightbearer right as it spawns. However, beware of the second Lightbearer at the back of the room, supported by a small group of Knights and Acolytes. Pushing these enemies is tough on Legendary and suicide on Master, so take your time here. Throw grenades their way, use your Heavy or Super, and pick at their HP from a safe distance. Unlike the Lightbearing Wizard, the Hunter variants can't recover their HP. 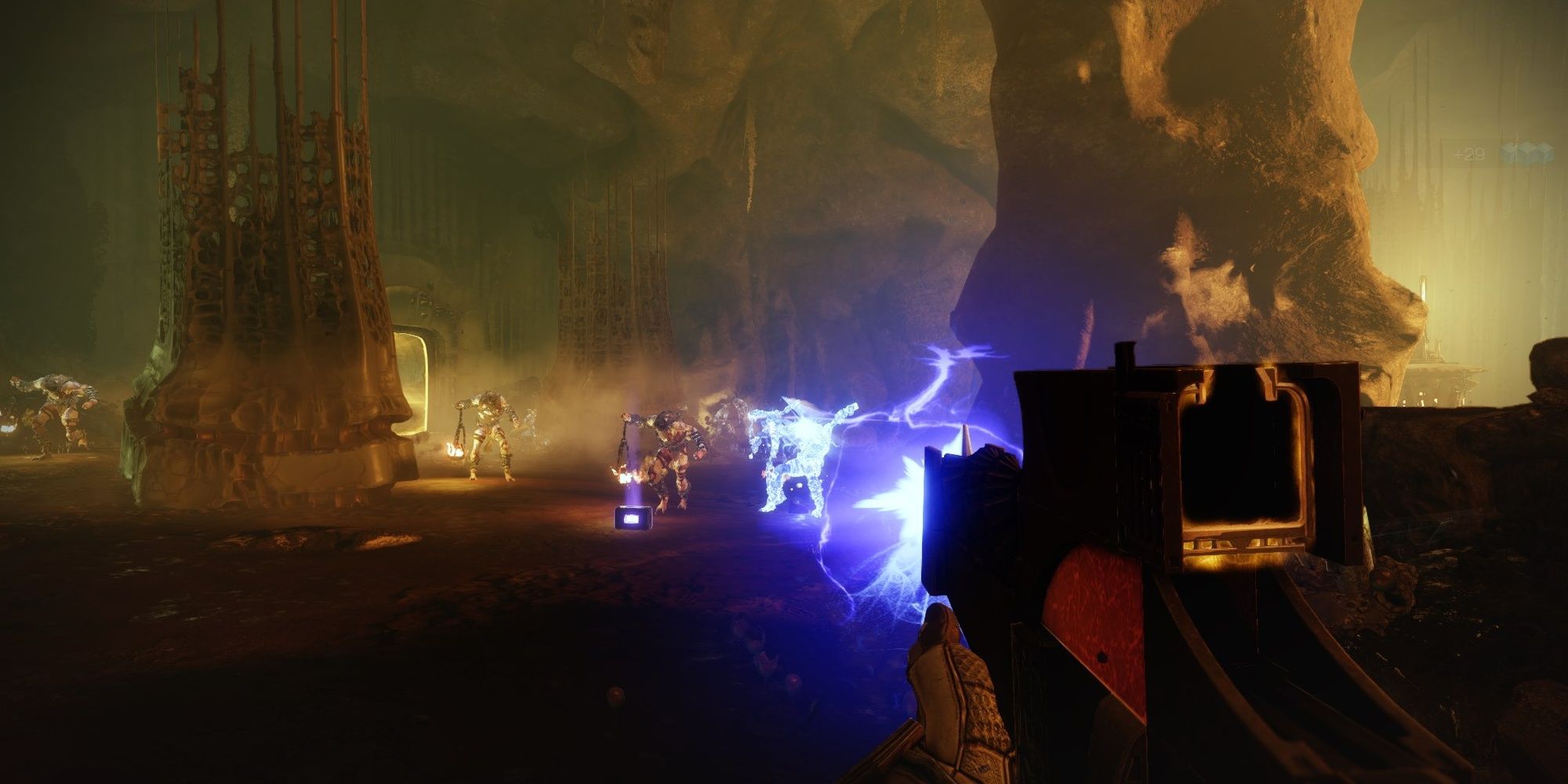 Once you've killed both Lightbearers, a swarm of Scorn will spawn directly across from you. On Master, this wave contains an Overload Chieftain and Unstoppable Abomination. The Legendary version only has the standard Chieftain and Abomination. You'll want to deal with the Chieftain first, stunning the Abomination beforehand. A few melee Scorn will push towards you, but they're fairly weak. Once you've killed the Scorn, you'll be able to push further into the depths of Savathun's Throne World. 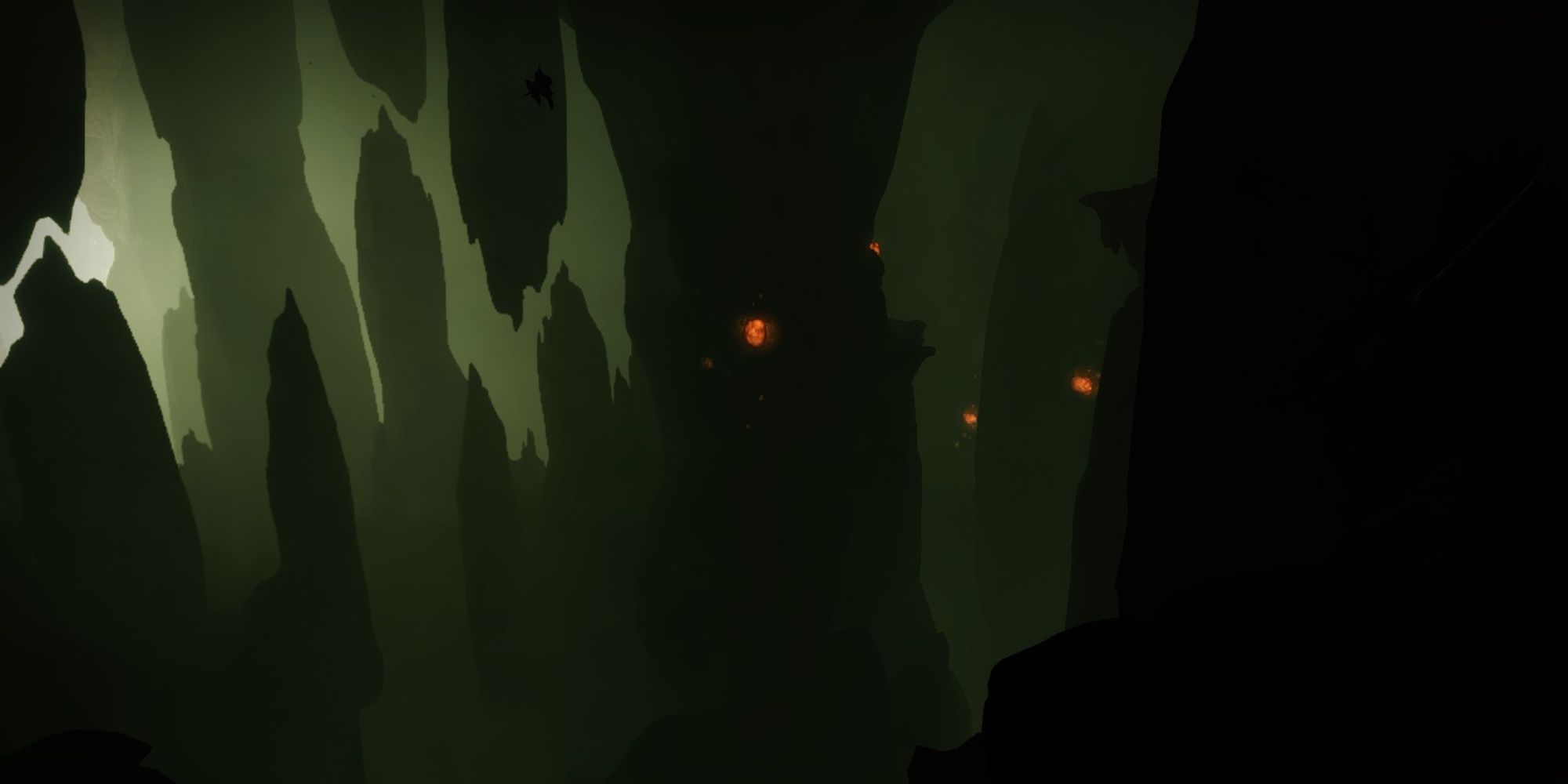 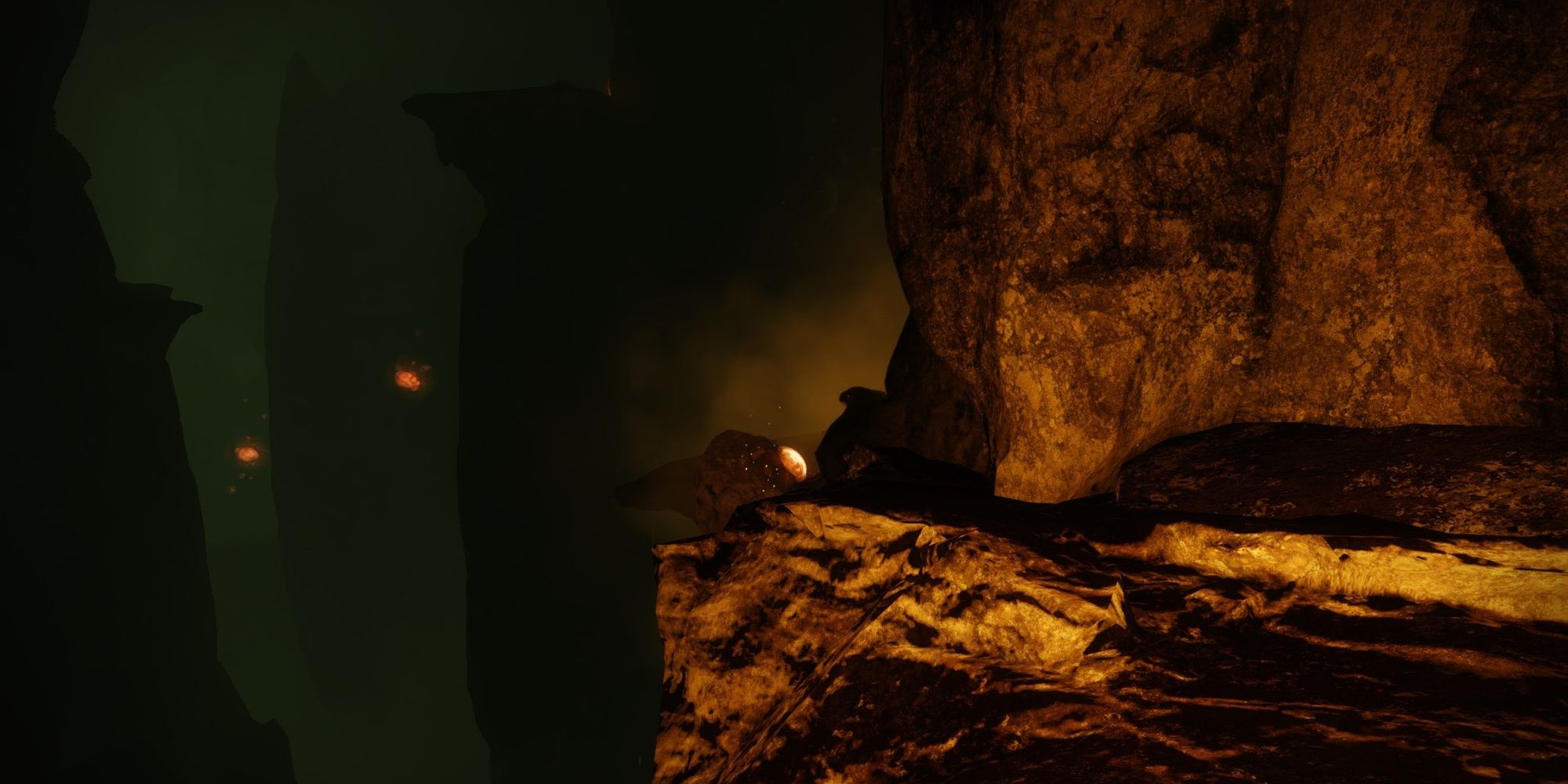 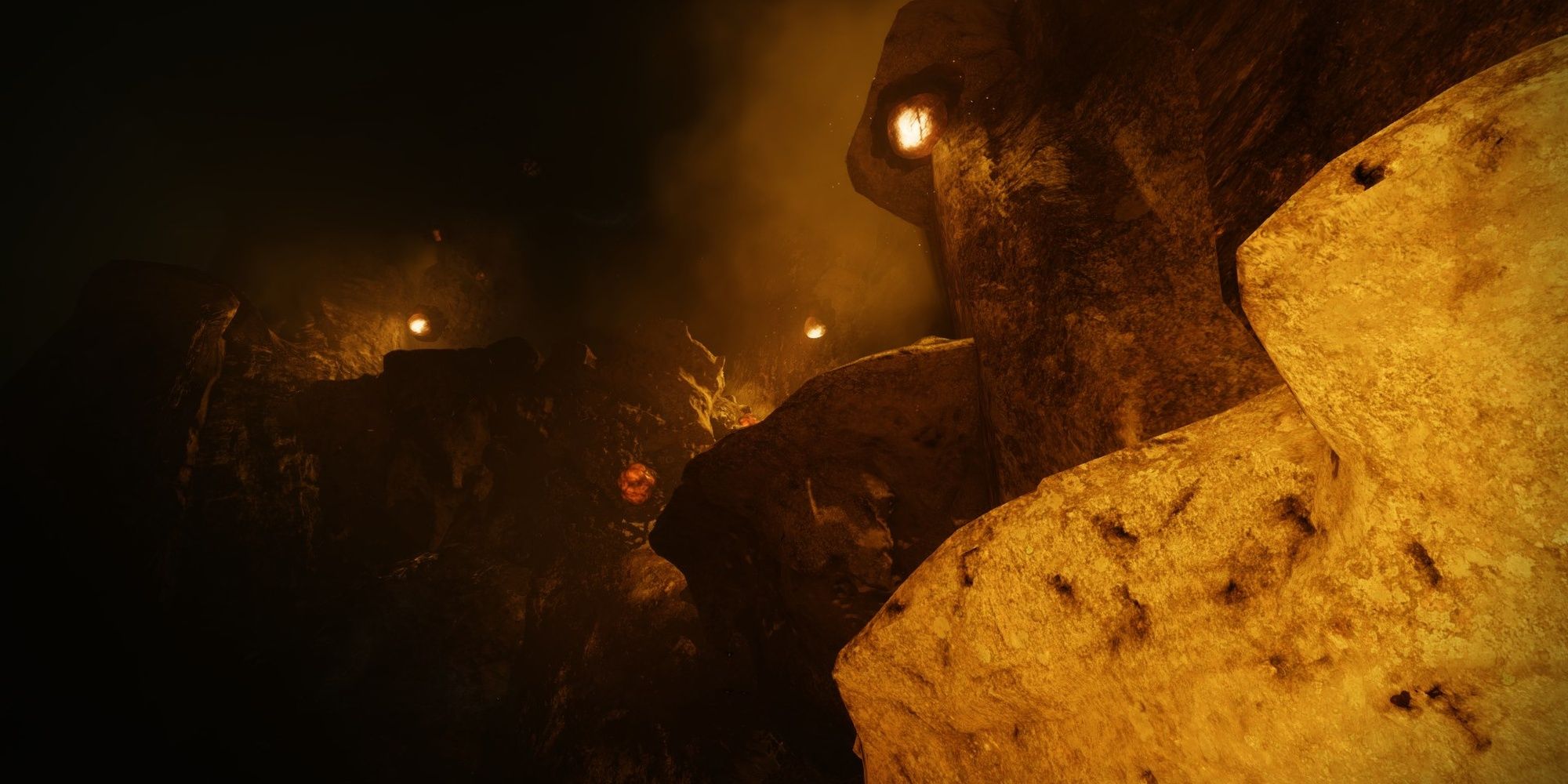 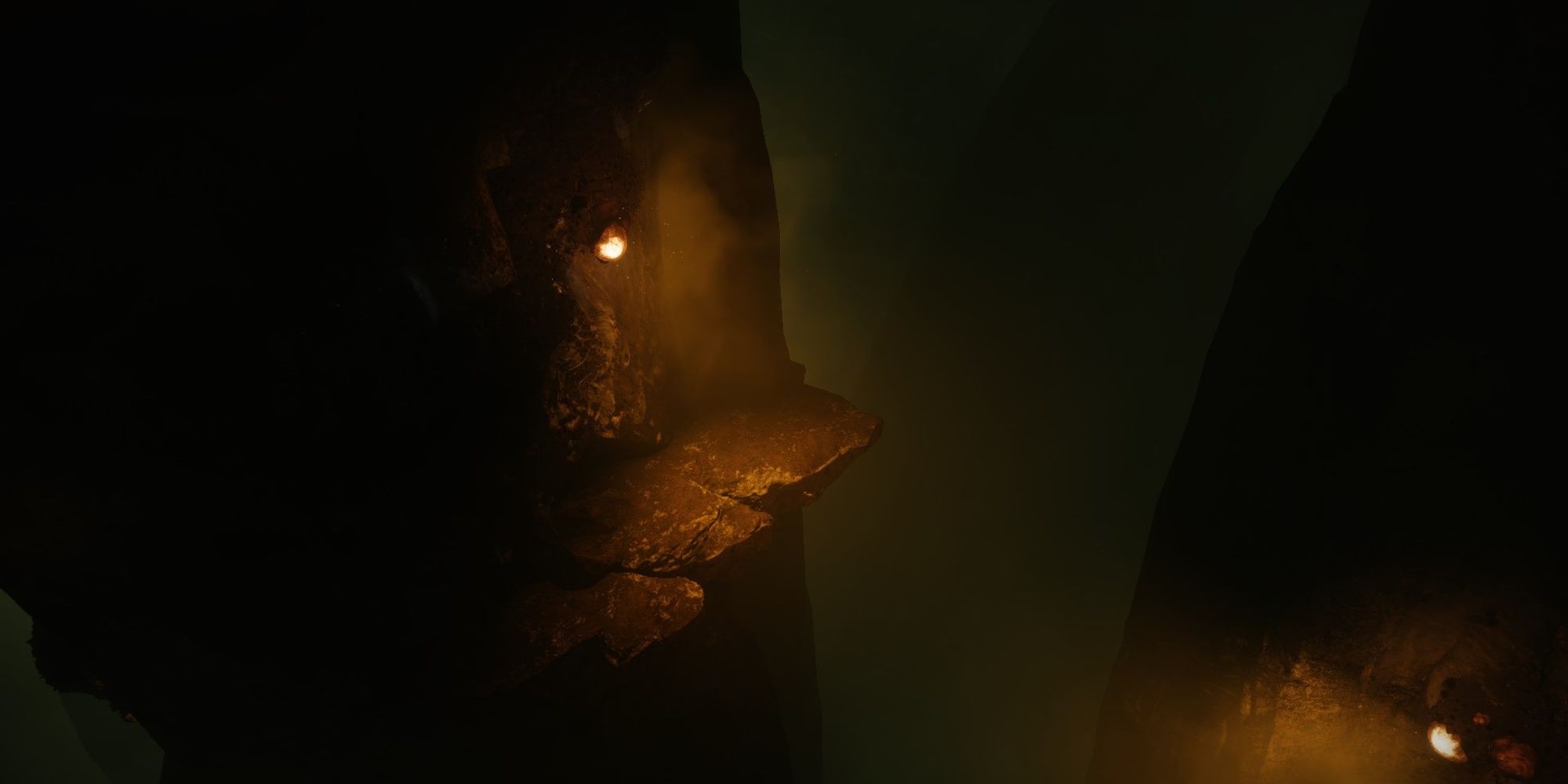 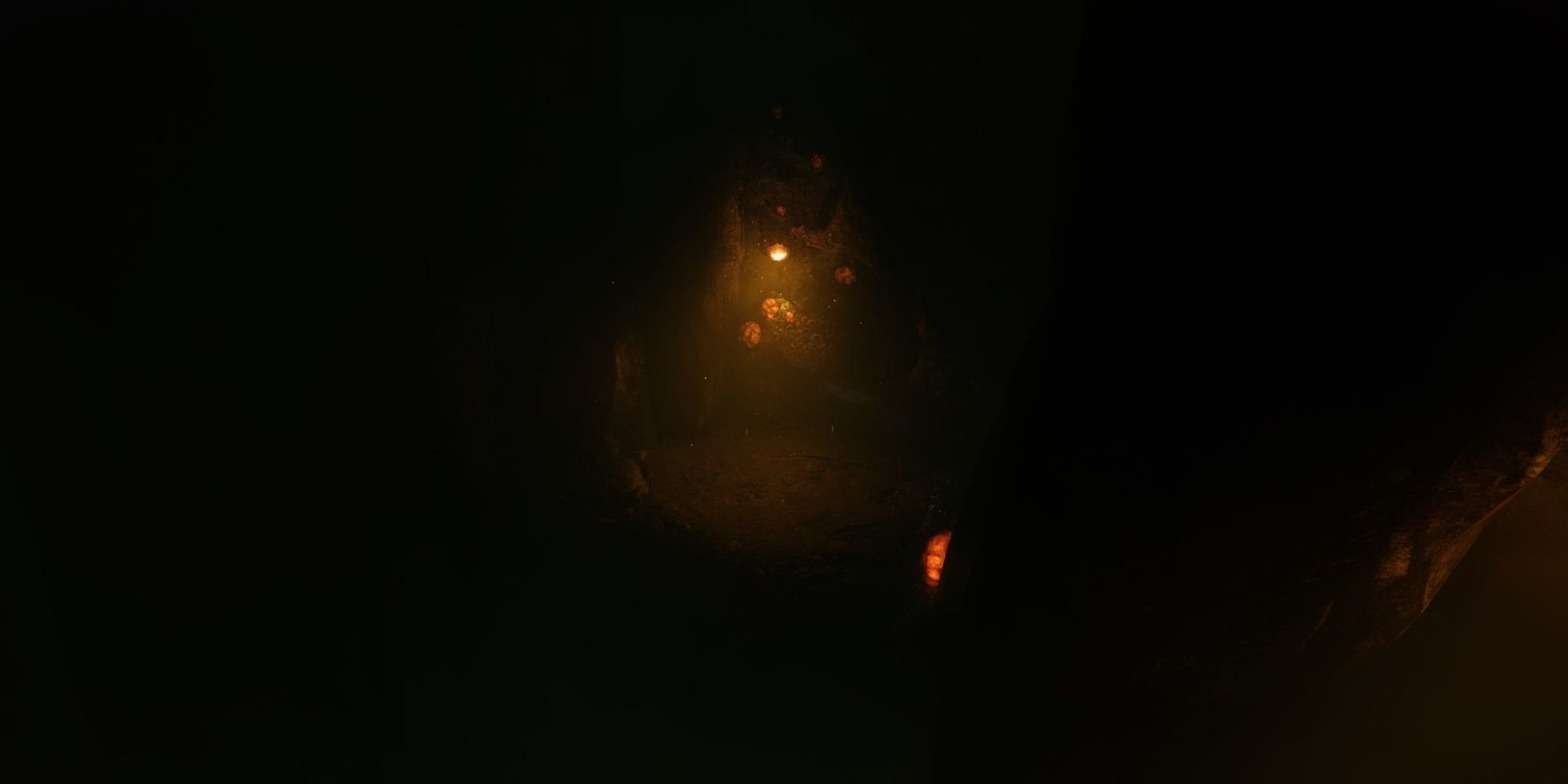 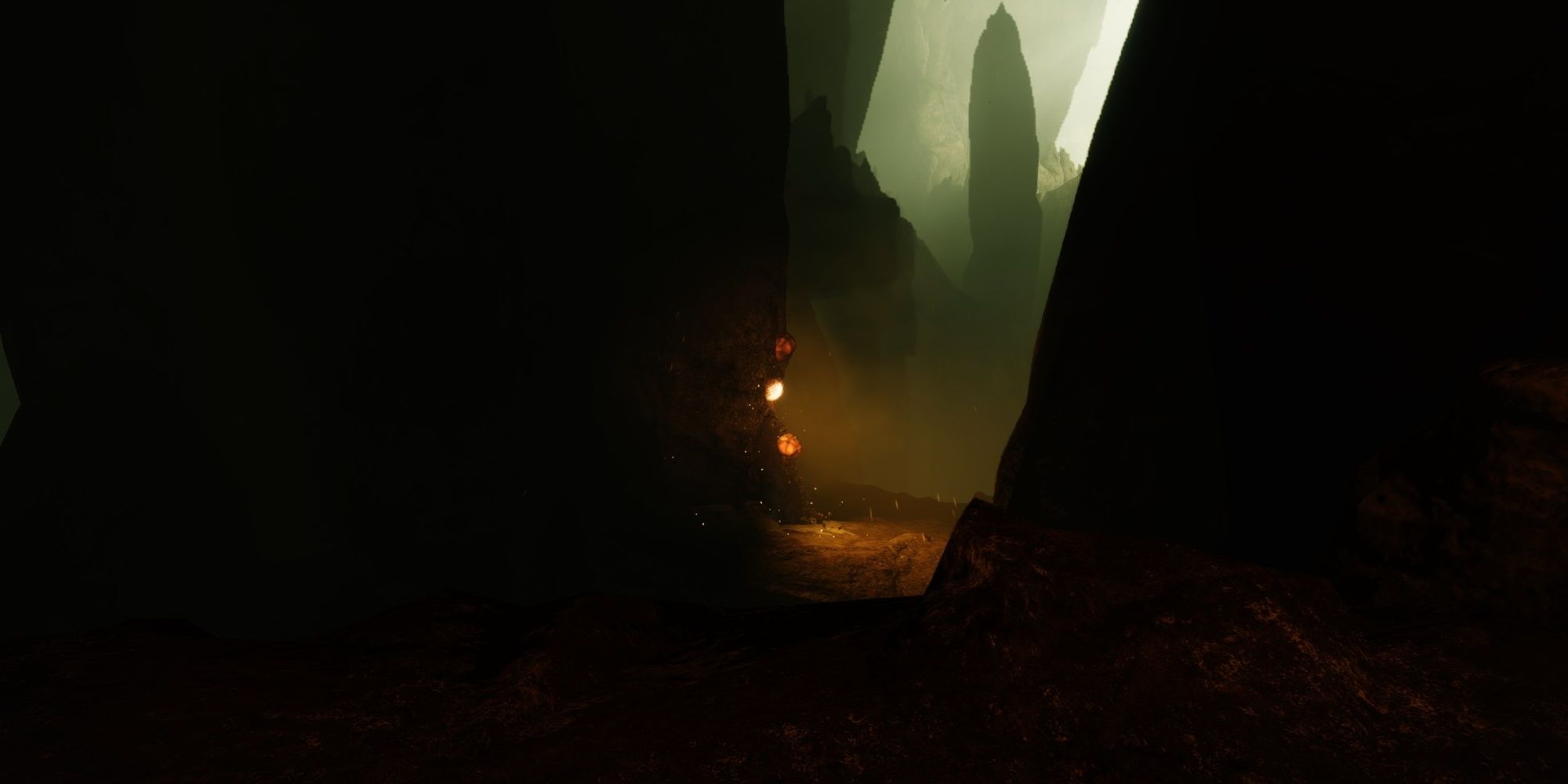 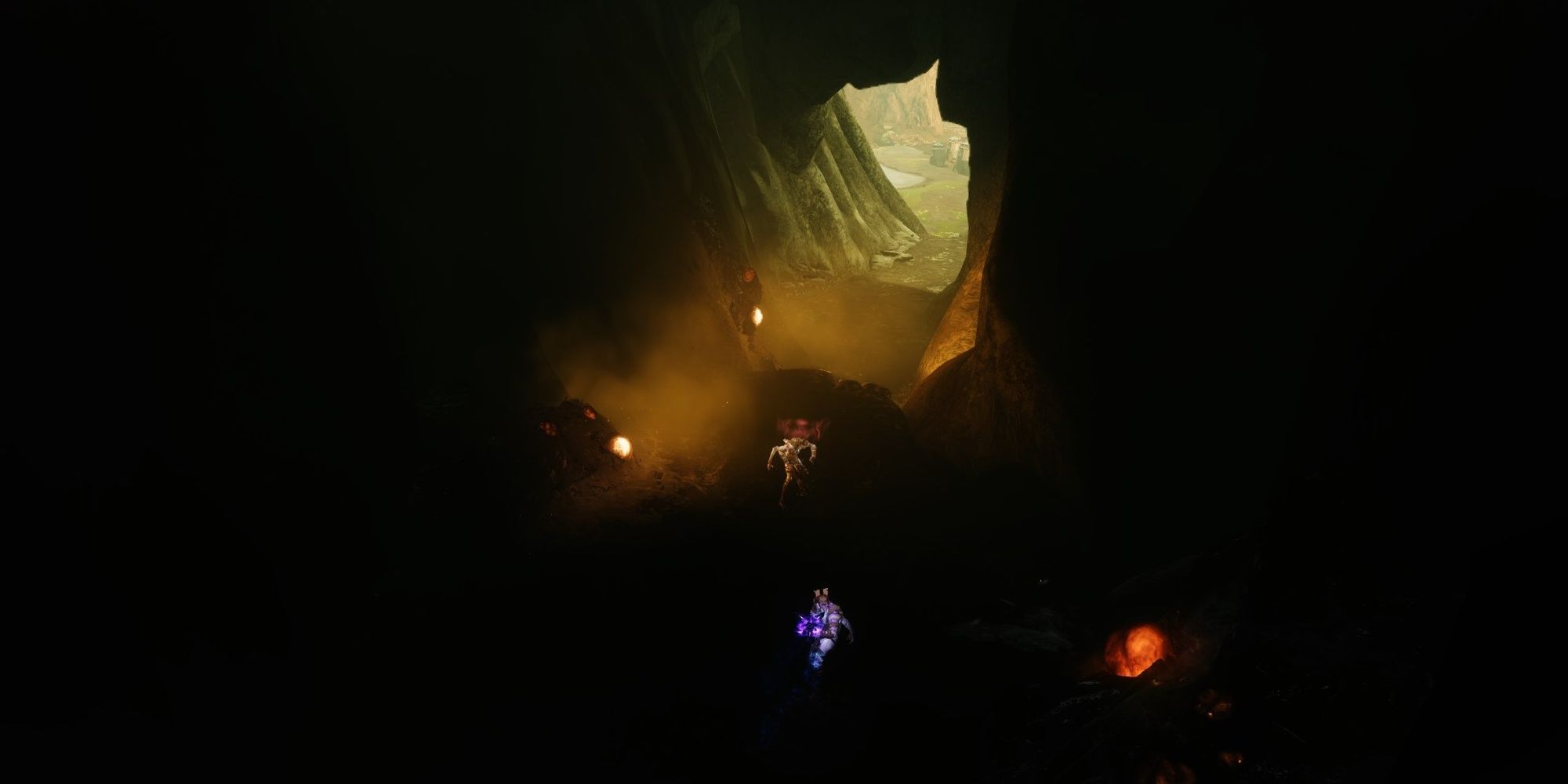 The last encounter will lead you into a dimly-lit cavern. Like before, shoot the orange puss sacks lining the walls to light the area. You'll want to slowly make your way down. At the bottom are two Scorn snipers. They're currently bugged and can easily one-shot you. Until they get patched next season, consider using a long-range weapon or an ability to kill them from safety. Not even Sniper or Void Damage Resistance can save you here. When they're dealt with, follow the path outside. 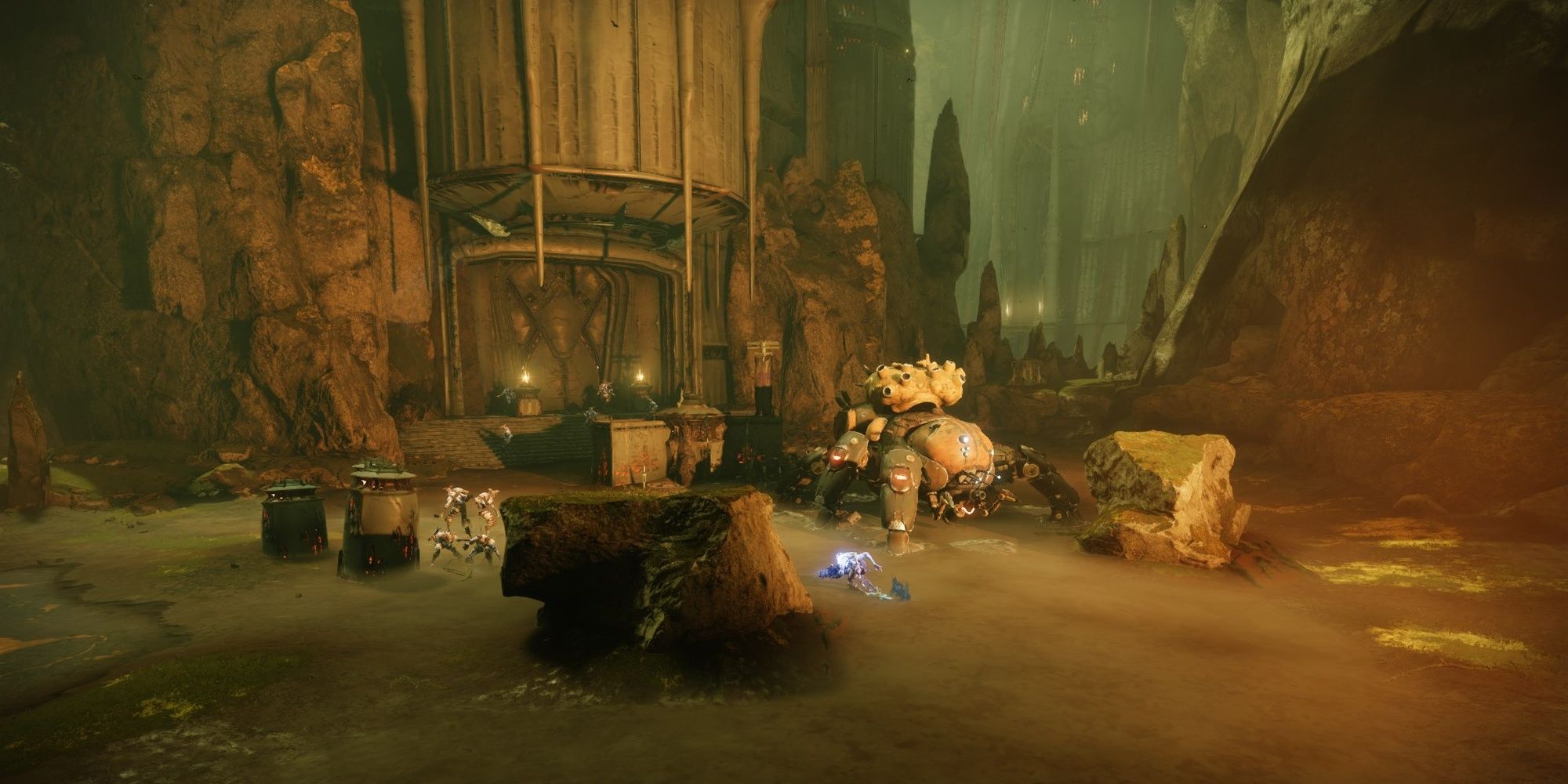 While there isn't a rally flag for this section, it might as well be an encounter. You'll have to destroy a Scorn Walker and small Scorn army to proceed. This walker is a powerhouse, capable of launching a swarm of projectiles your way that can kill you on Master difficulty. Don't push up; stick to the rock just beyond the Scorn Pikes. If you try to move further up, you'll quickly die.

Use your small bit of cover to peak shoot the Scorn and walker in the area, focusing on the adds first. On Master difficulty, you'll find an Overload Chieftain at the very back, but you can safely ignore them until the tank is destroyed. Legendary only has a default Chieftain. Work on killing as many adds as possible before dealing with the walker.

The Scorn Walker works the same as its Fallen counterpart. Shoot one of its six legs until it breaks, at which point it'll expose its weak point near the front. When the walker is on the last third of its total HP, an additional wave of Scorn will spawn. There aren't any Champions or tough enemies in this wave, so take your time. Clear the adds, break another leg, and finish off the walker. For those on Master, now is a great opportunity to deal with the Overload Champion. Make your way inside the building when ready. 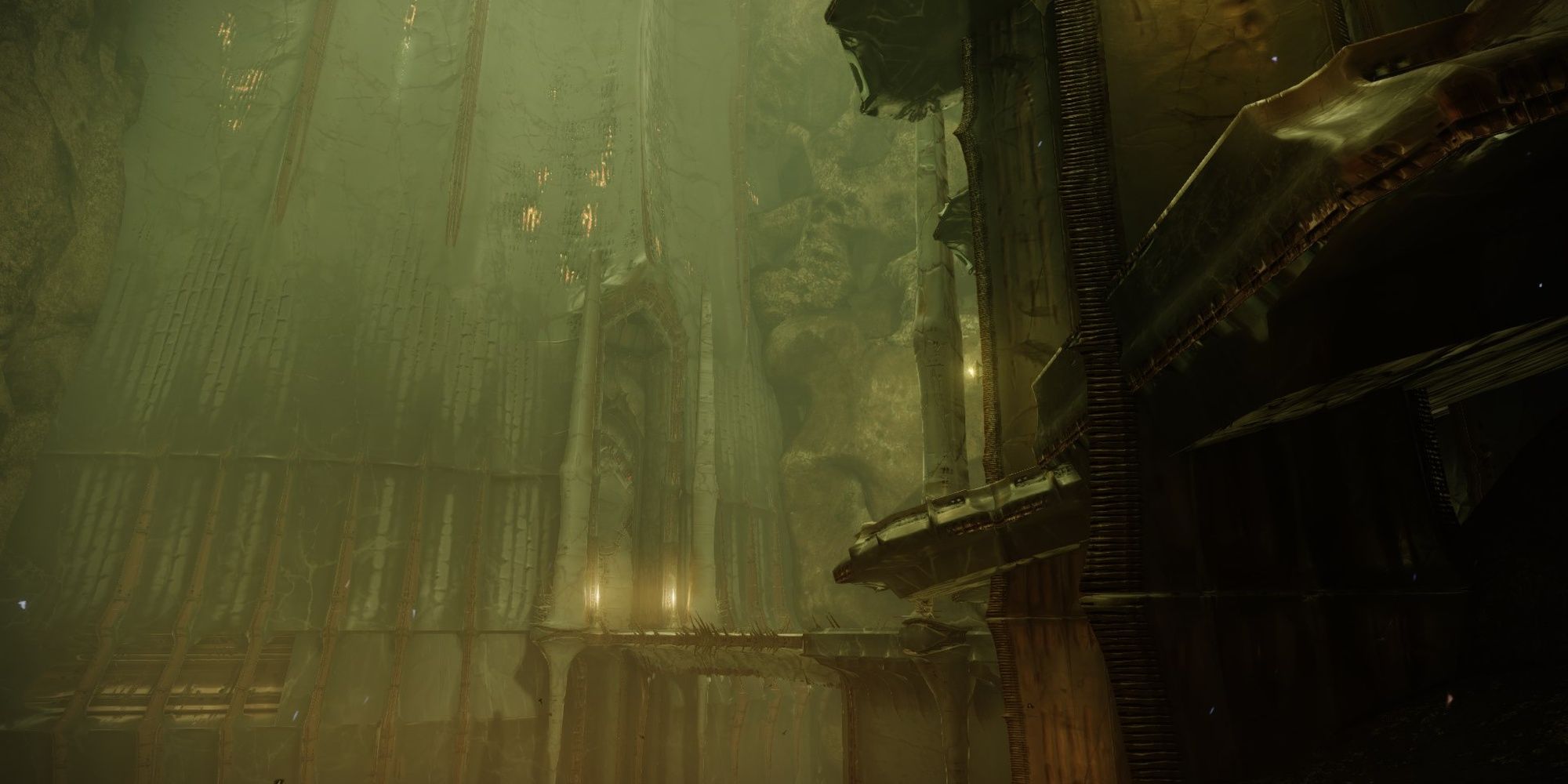 Inside the building is yet another group of Scorn enemies, the Master variant containing an Overload Chieftain. Arguably more dangerous are the Scorn snipers in this room. Kill them as soon as you're able, or they'll easily one-shot you and end your flawless run. Take care of the Chieftain once the adds are dealt with. Destroy the floating crystal once the Chieftain is slain, then follow the waypoint on your HUD to ascend the fortress ruins. 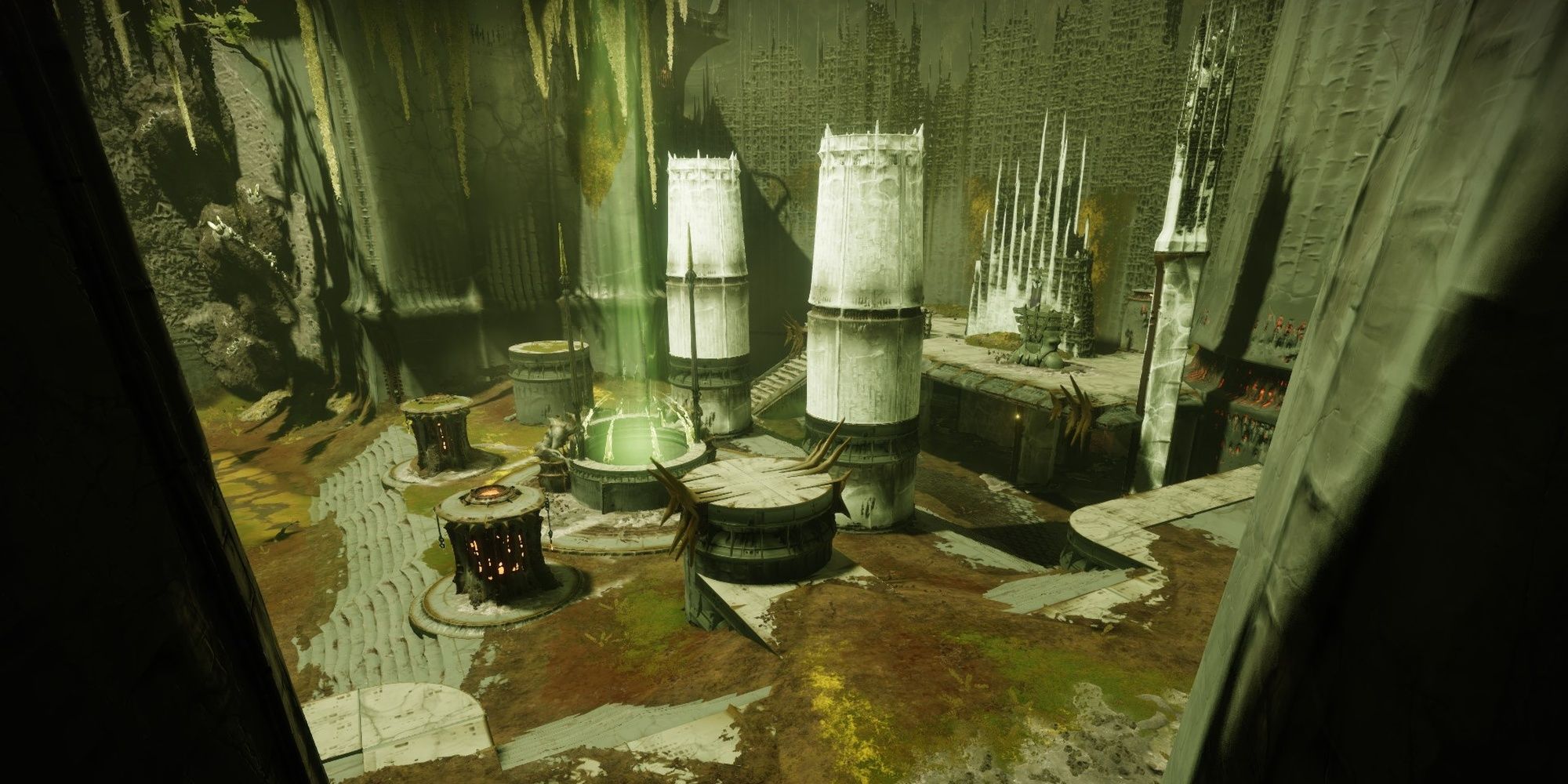 At the top is a small arena that's guarded by even more Scorn. A well at the center of the arena is blocked by Hive magic and must be dissipated by breaking two crystals—one on each side. As with the previous door, a Chieftain is guarding each one, so have your Heavy ready. The Master variant replaces the Chieftains with Overload Chieftains, and an Unstoppable Abomination is also present.

Before you enter, try to pick off the Scorn snipers from a distance with your Bow or any long-range weapons. When ready, drop down and immediately head to your left. You'll need to deal with an Abomination and Chieftain here, so use your Super. If you can't kill them fast enough, you'll need to retreat and find cover. When you've cleared one side, more adds will spawn. A grenade will make short work of them. Kill the second Chieftain, break the crystals, then drop into the well. 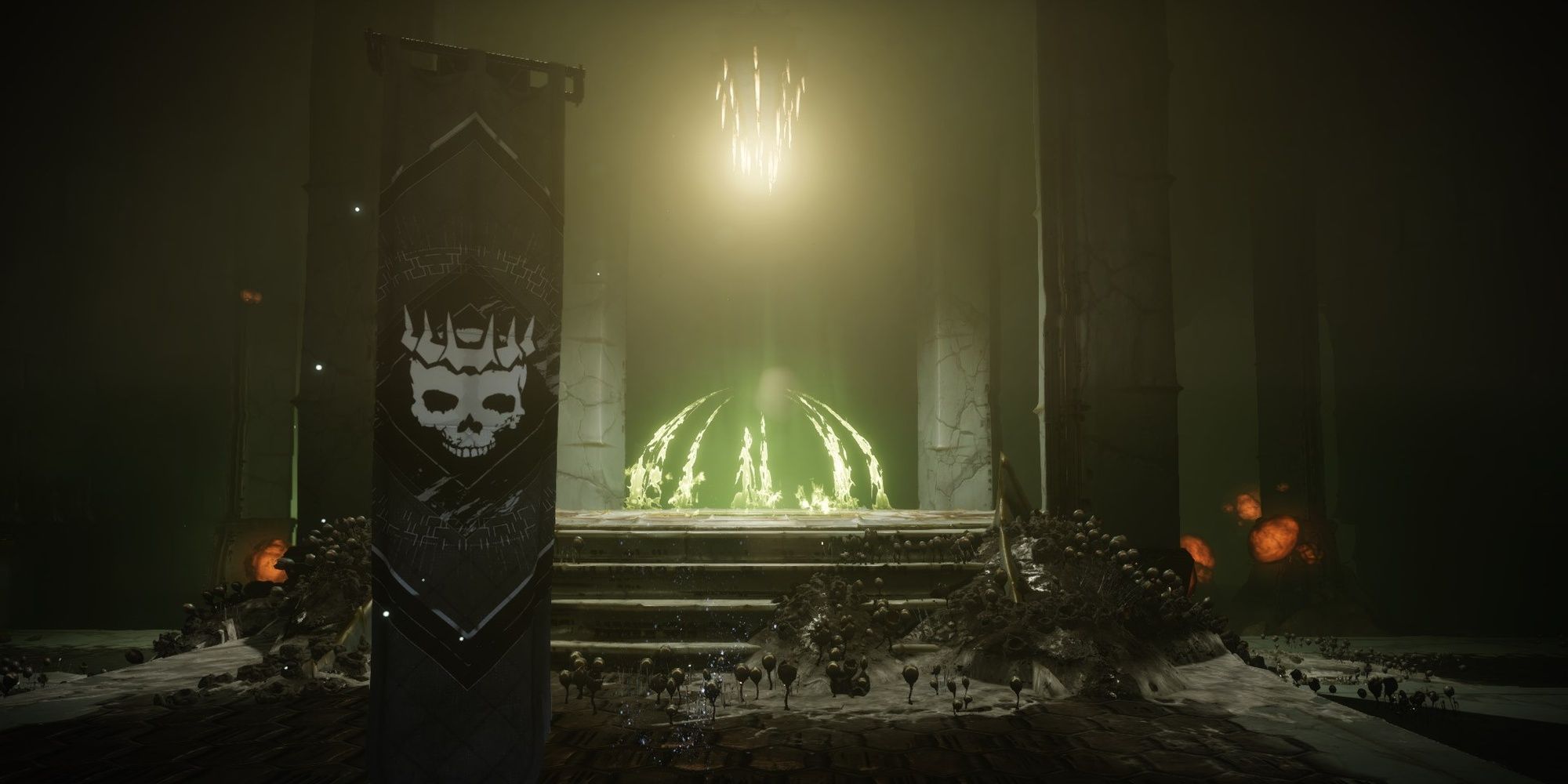 It appears that the Hangman Baron has been resurrected somehow. You aren't able to damage the boss, but there are Hive crystals around the arena you can break to lower its shield. Around the arena are strange Hive runes, similar to the Pit of Heresy dungeon. Your goal is to enter each room, kill a Chieftain, then break a crystal. There are three rooms in total you'll need to clear, each containing a Chieftain and multiple adds. On Master, these Chieftains are Overload Chieftains, so have your Anti-Overload weapon ready.

The only noteworthy thing about these rooms is the sheer number of enemies in them. One rune has Screebs that will charge you, so it's best to keep your distance. There's one section of the arena with no symbols at all; do not enter this room. Four Shriekers are inside and will kill you in less than a second. Destroy all three crystals, then return to the Baron. It'll teleport away to the floor under you. Drop down and follow the path when you're ready. 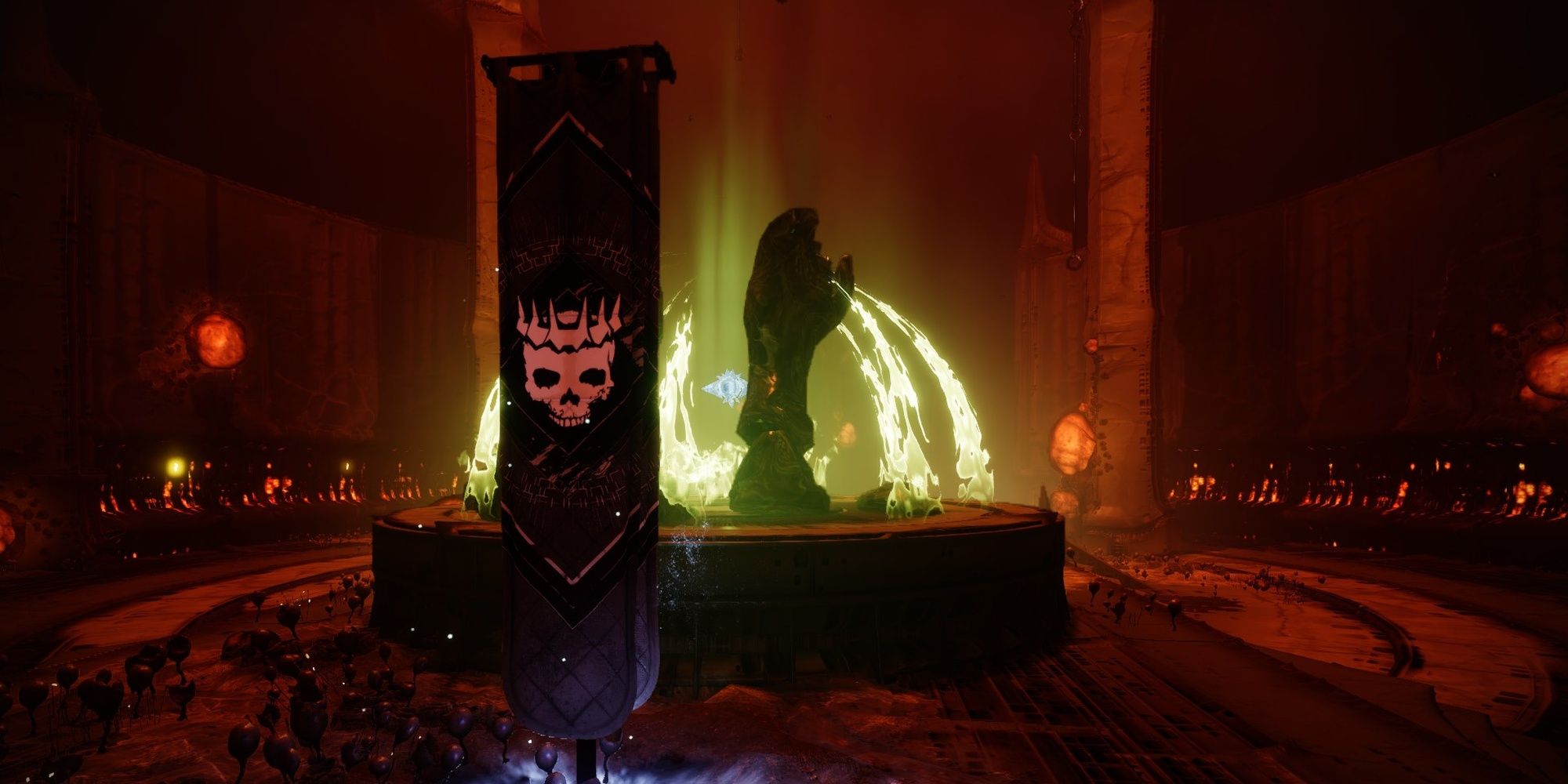 This encounter is all about patience. Right as you drop down, the Baron will spawn alongside a Chieftain. You must kill the Chieftain to drop the shield of a nearby crystal. Destroy the crystal, and you can DPS the boss. Brutiks deals immense melee damage, so keep your distance. If he ever closes the gap, immediately run away. Linear Fusion Rifles and Rocket Launchers work great for quickly damaging him. 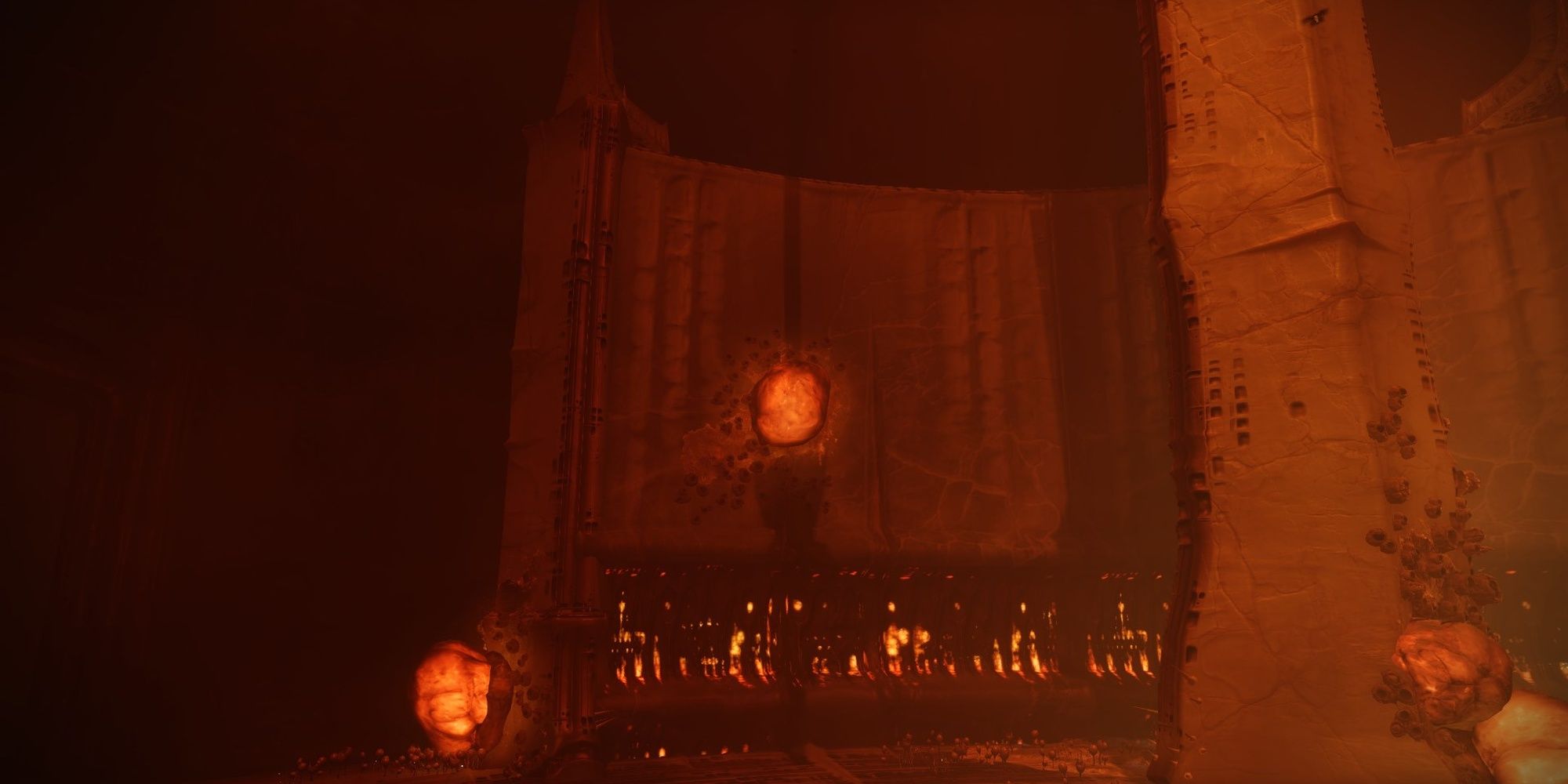 You can cheese the DPS phase by standing atop orange sacks scattered across the arena. Stand on one, deal some damage, then reposition to another sack. Repeat until you've phased the boss.

Once you've removed a third of his total HP, he'll become immune again. Like the last encounter, you'll need to destroy three crystals scattered across the arena to make the boss vulnerable to damage. Look for the floating Hive runes to find which rooms you need to clear. Each crystal is guarded by a Scorn Chieftain major, upgraded to an Overload Chieftain on Master difficulty. The Chieftain is always at the backend of the room. Prep your Overload counter whenever you enter a room, and clear the adds as fast as you can. Break all three crystals, DPS the boss, and repeat one more time. Once the Baron is slain, the mission will end.

As for killing the boss: 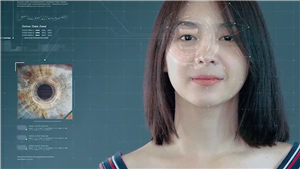