Memfault, a startup developing software for consumer device firmware delivery, monitoring, and diagnostics, today closed an $8.5 million series A funding round. CEO François Baldassari says the capital will enable Memfault to scale its engineering team and make investments across product development and marketing.

Slow, inefficient, costly, and reactive processes continue to plague firmware engineering teams. Often, companies recruit customers as product testers — the first indication of a device issue comes through users contacting customer service or voicing dissatisfaction on social media. With 30 billion internet of things (IoT) devices predicted to be in use by 2025, hardware monitoring and debugging methods could struggle to keep pace. As a case in point, Palo Alto Networks’ Unit 42 estimates that 98% of all IoT device traffic is unencrypted, exposing personal and confidential data on the network.

Memfault, which was founded in 2019 by veterans of Oculus, Fitbit, and Pebble, offers a solution in a cloud-based firmware observability platform. Using the platform, customers can capture and remotely debug issues as well as continuously monitor fleets of connected devices. Memfault’s software development kit is designed to be deployed on devices to capture data and send it to the cloud for analysis. The backend identifies, classifies, and deduplicates error reports, spotlighting the issues likely to be most prevalent.

Baldassari says that he, Tyler Hoffman, and Christopher Coleman first conceived of Memfault while working on the embedded software team at smartwatch startup Pebble. Every week, thousands of customers reached out to complain about Bluetooth connectivity issues, battery life regressions, and unexpected resets. Investigating these bugs was time-consuming — teams had to either reproduce issues on their own units or ask customers to mail their watches back so that they could crack them open and wire in debug probes. To improve the process, Baldassari and his cofounders drew inspiration from web development and infrastructure to build a framework that supported the management of fleets of millions of devices, which became Memfault.

By aggregating bugs across software releases and hardware revisions, Memfault says its platform can determine which devices are impacted and what stack they’re running. Developers can inspect backtraces, variables, and registers when encountering an error, and for updates, they can split devices into cohorts to limit fleet-wide issues. Memfault also delivers real-time reports on device check-ins and notifications of unexpected connectivity inactivity. Teams can view device and fleet health data like battery life, connectivity state, and memory usage or track how many devices have installed a release — and how many have encountered problems.

“We’re building feedback mechanisms into our software which allows our users to label an error we have not caught, to merge duplicate errors together, and to split up distinct errors which have been merged by mistake,” Baldassari told VentureBeat via email. “This data is a shoo-in for machine learning, and will allow us to automatically detect errors which cannot be identified with simple heuristics.” 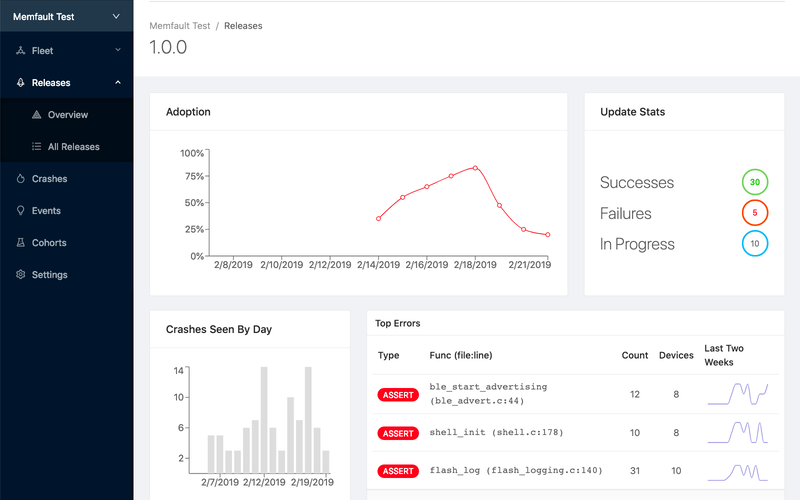 IDC forecasts that global IoT revenue will reach $742 billion in 2020. But despite the industry’s long and continued growth, not all organizations think they’re ready for it — in a recent Kaspersky Lab survey, 54% said the risks associated with connectivity and integration of IoT ecosystems remained a major challenge.

That’s perhaps why Memfault has competition in Amazon’s AWS IoT Device Management and Microsoft’s Azure IoT Edge, which support a full range of containerization and isolation features. Another heavyweight rival is Google’s Cloud IoT, a set of tools that connect, process, store, and analyze edge device data. Not to be outdone, startups like Balena, Zededa, Particle, and Axonius offer full-stack IoT device management and development tools.

But Baldassari believes that Memfault’s automation features in particular give the platform a leg up from the rest of the pack. “Despite the ubiquity of connected devices, hardware teams are too often bound by a lack of visibility into device health and a reactive cycle of waiting to be notified of potential issues,” he said in a press release. “Memfault has reimagined hardware diagnostics to instead operate with the similar flexibility, speed, and innovation that has proven so successful with software development. Memfault has saved our customers millions of dollars and engineering hours, and empowered teams to approach product development with the confidence that they can ship better products, faster, with the knowledge they can fix bugs, patch, and update without ever disrupting the user experience.”

Partech led Memfault’s series A raise with participation from Uncork Capital, bringing the San Francisco, California-based company’s total raised to $11 million. In addition to bolstering its existing initiatives, Memfault says it’ll use the funding to launch a self-service of its product for “bottom-up” adoption rather than the sales-driven, top-down approach it has today.