The Digital World is an odd place. It has islands that form in a matter of days, floating mountains, and even fruit with the qualities of meat. It's also home to many species of Digimon that could never exist outside such a fantastical, yet technologically savvy, place. Such a species is the Machine type Digimon.

Machine and Cyborg Digimon are a species of Digimon whose bodies are either partially or entirely made up of machinery. While cybernetics isn't anything new, at least in terms of fantasy, having an entirely sentient machine with wills of their own is something a little more uncommon. Out of all the Machine and Cyborg species of Digimon, here are the ones that stand out among them. 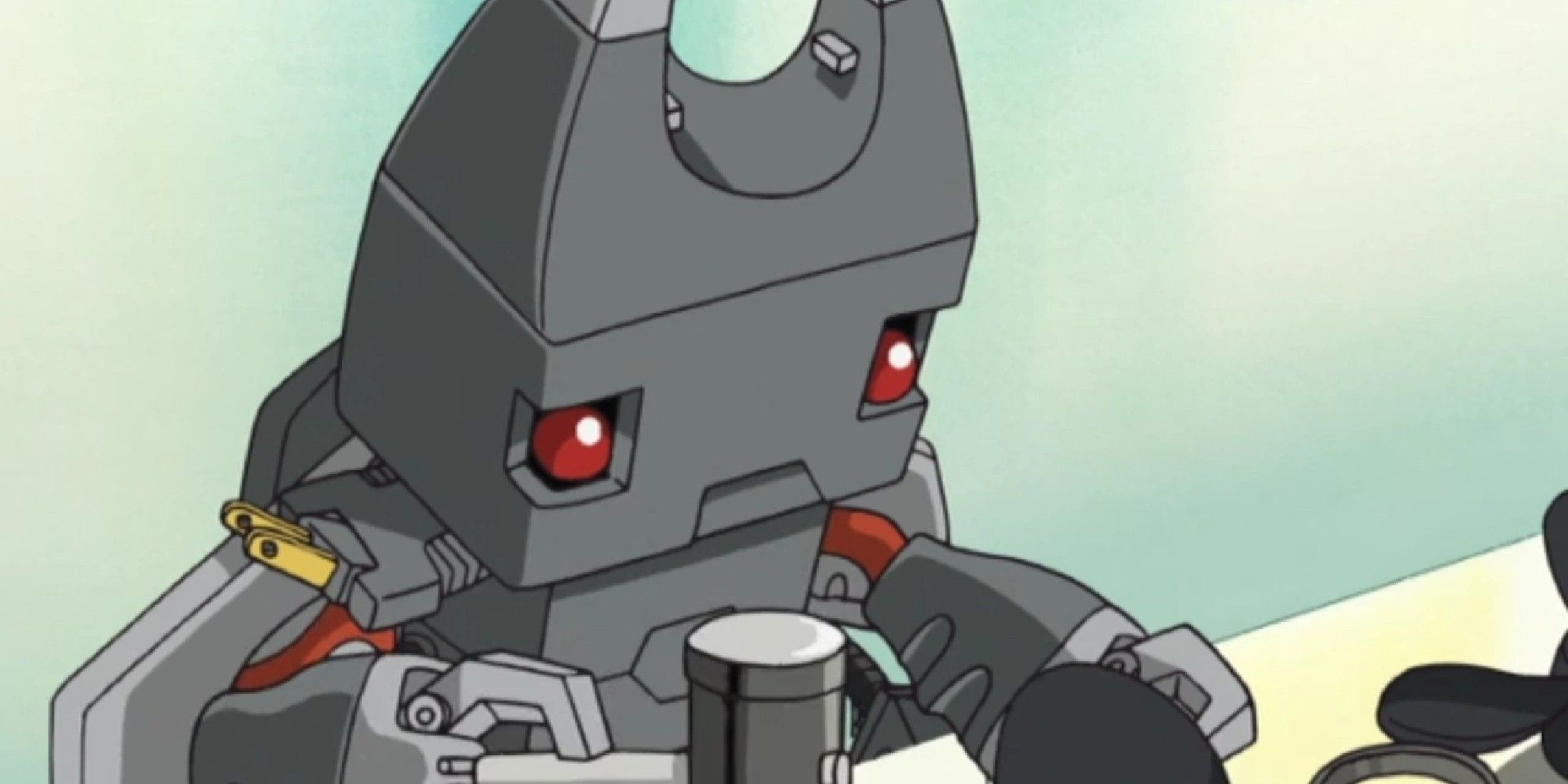 We're starting this list with the Rookie Digimon, Kokuwamon. This Digimon is a Machine type Digimon, though it's often called the Insect-Mecha Digimon due to its visual ties with insects. Despite its looks and classification, Kokuwamon is not actually an Insect type Digimon. In reality, while this Digimon looks like a beetle, it more closely resembles a sentient stun gun. 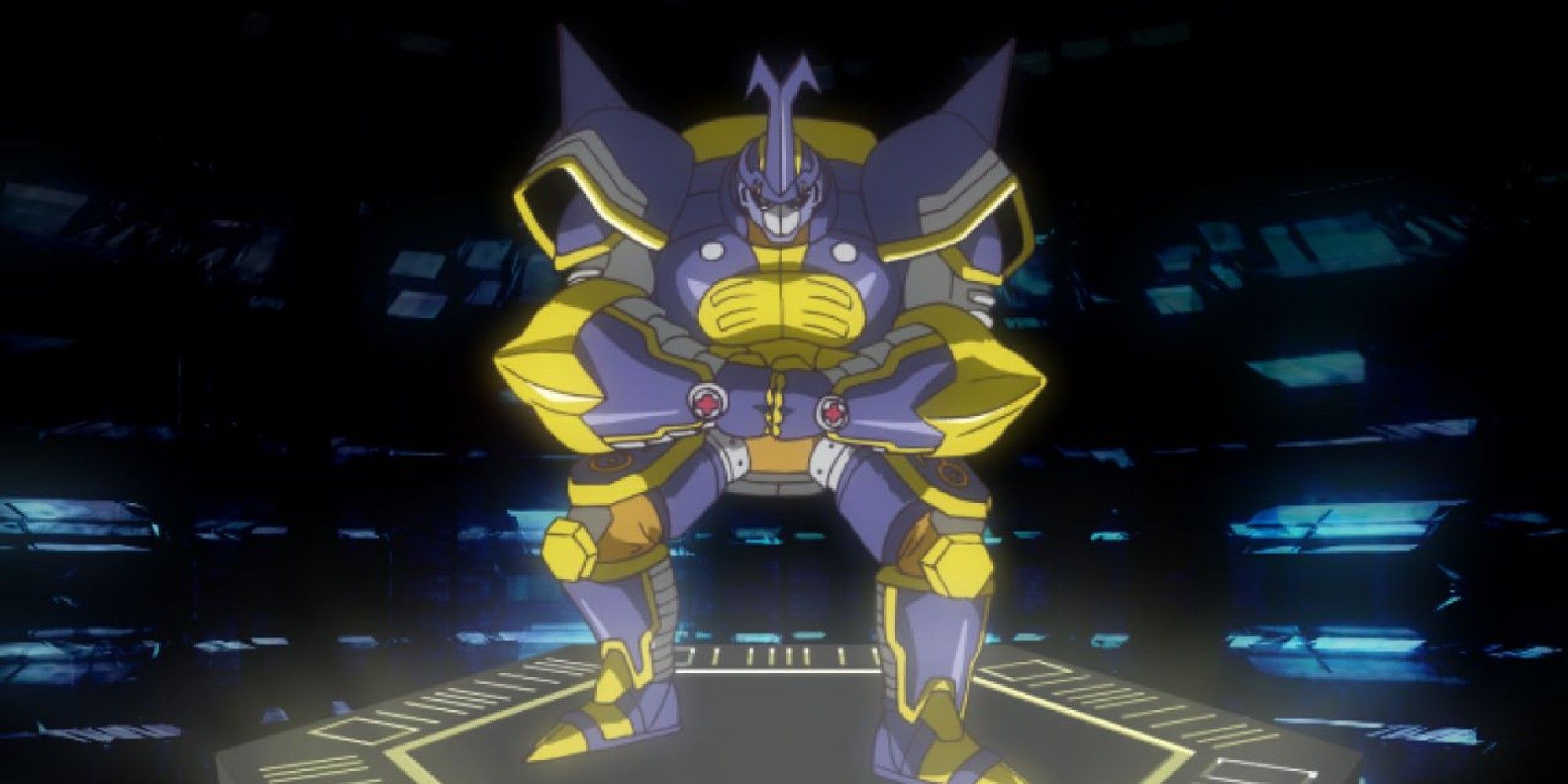 Despite the general dislike for Digimon Frontier, no one can deny that the designs for the children's Digimon forms were striking. J.P.'s spirit, Beetlemon, in particular was striking even among the other Legendary Warriors. The Spirit of Thunder is clearly inspired by the Digimon's namesake, but it also combines a robotic element that makes this Digimon stand out.

This Digimon's metal body allows it to generate its own magnetic field that is capable of creating an antigravity bubble around itself. Within this space, Beetlemon can move at incredible speeds. This Cyborg Digimon generates so much electricity that sparks are constantly being exuded from its body. 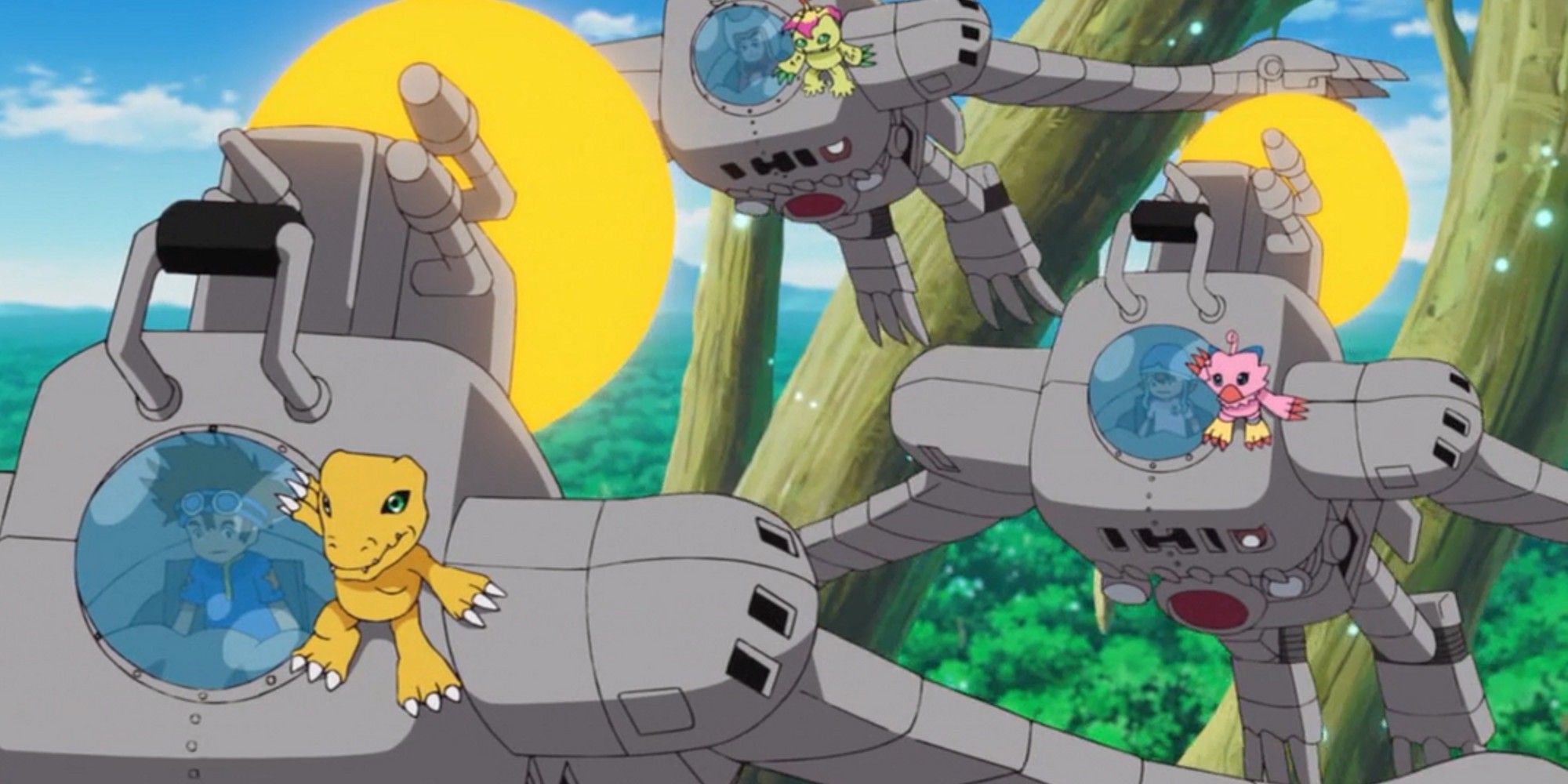 Unlike the other Digimon on this list, Mekanorimon isn't sentient. In fact, this Digimon can't move, think, or take any action by itself. To do anything, Mekanorimon must be piloted by another living being as this Digimon is little more than a suit.

Yes, this Digimon is quite a conundrum. It's a Digimon, yet it functions like a glorified suit of armor. It was literally made to be piloted by a much smaller Digimon, yet it is somehow considered alive. Mekanorimon was the first Vehicle Digimon, and it's still considered a work in progress. Should it be overworked, its computer kernel will overheat and it will become inactive. 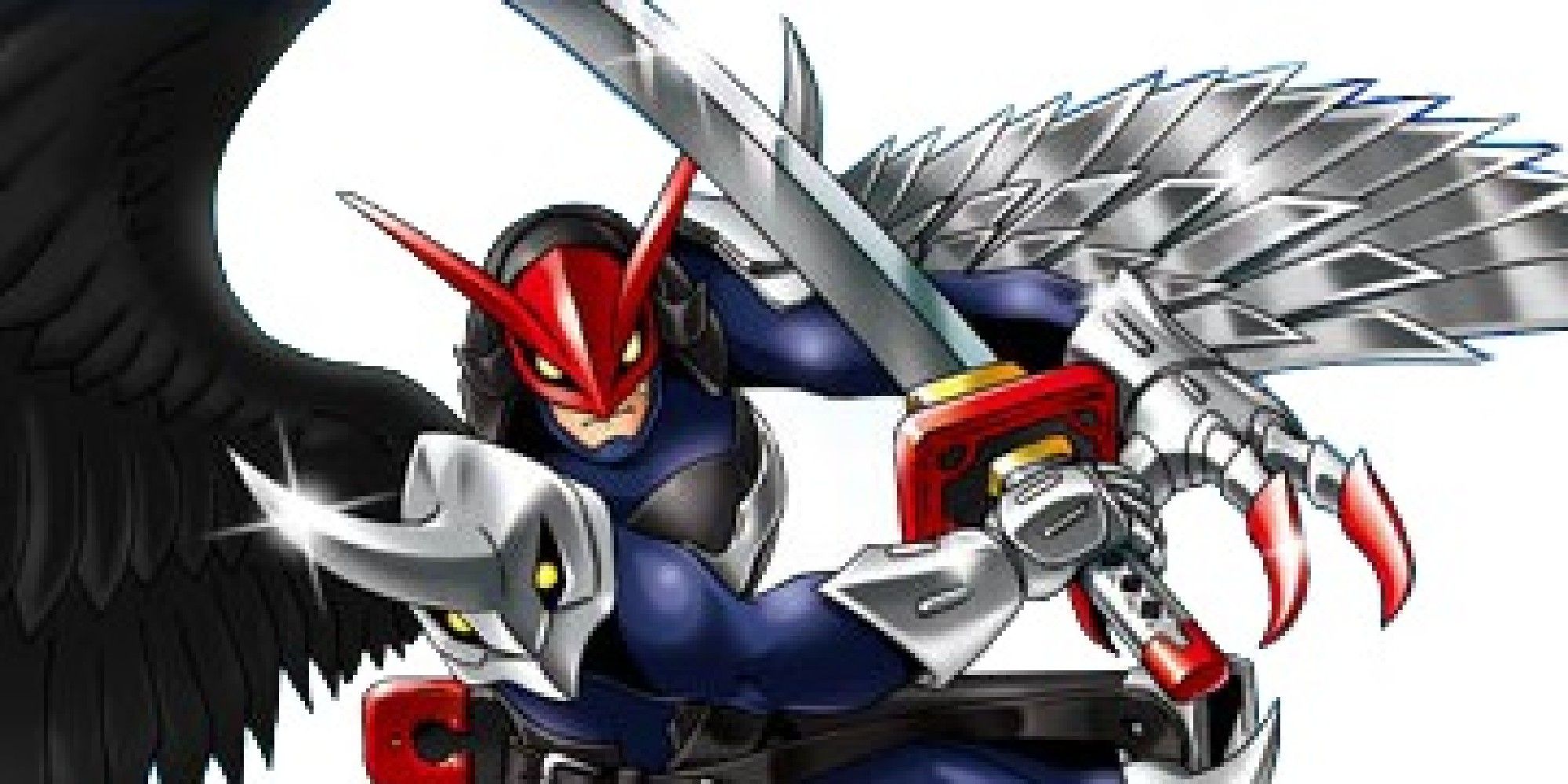 At first glance, Ravemon doesn't have the same robotic appearance as the other members of this list. However, what many would assume to be armor pieces are actually cybernetic enhancements. These parts grant Ravemon a tremendous boost in speed as well as a deadly arsenal of weapons it uses to strike down its target.

Like the majority of the Falcomon line, Ravemon keeps the ninja aesthetic, becoming more humanoid-like in appearance and, of course, gaining cybernetics. The blend of traditional ninja and 'modern' cybernetics make for an interesting design that has led to this Digimon being called the Silver Crow. Along with wielding its sharp claws and a sword in battle, Ravemon also uses its one metal wing to cut through its opponents with ease. 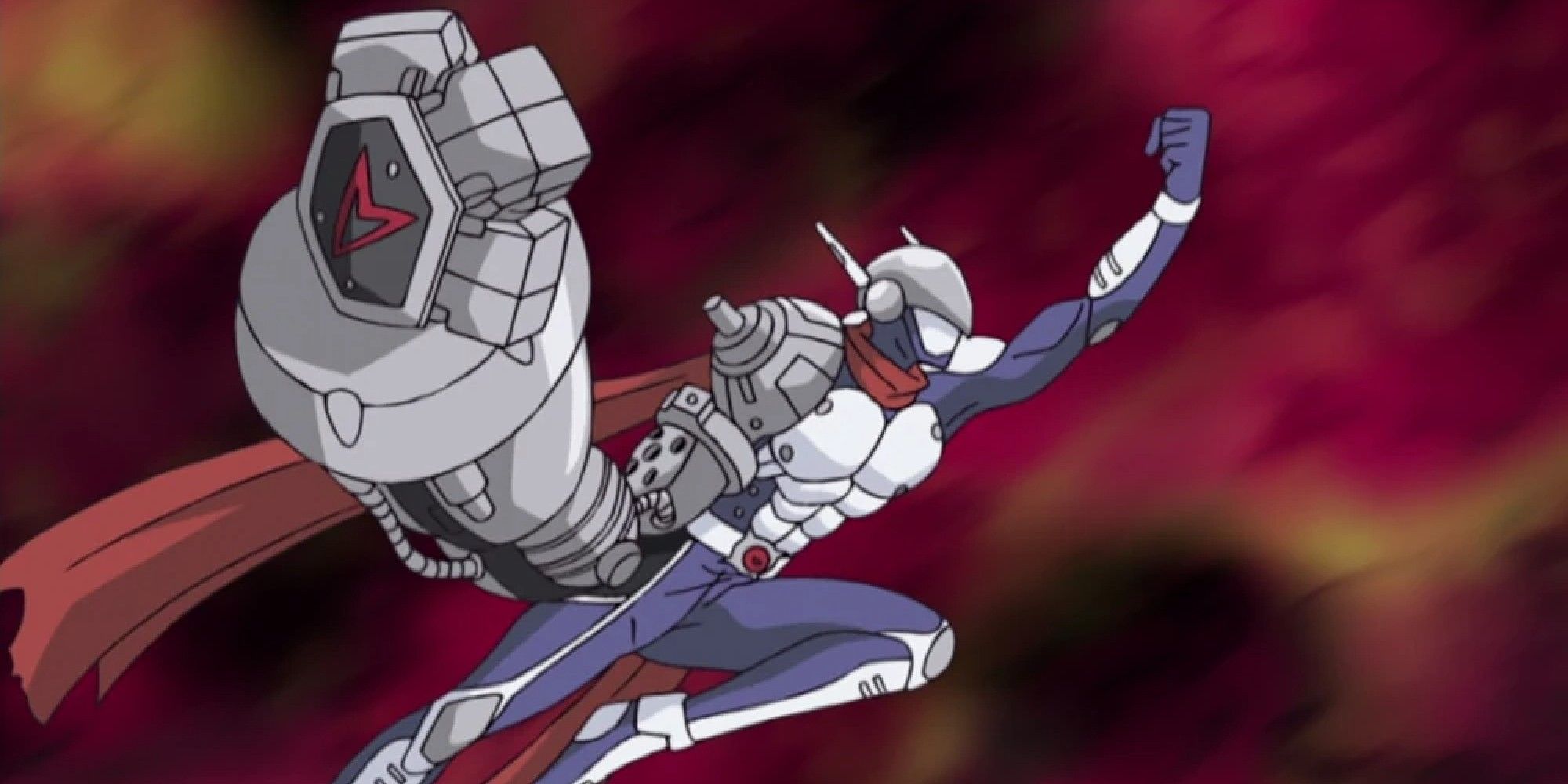 If the Digital World were to have a superhero, it would have to be Justimon. This heroic Cyborg Digimon has a deep sense of justice that burns through them like a roaring fire. Like any true hero, Justimon strives to stop evil where ever it may lie and to be an inspiration to Rookie Digimon everywhere. It also seems to enjoy posing dramatically on top of tall peaks.

Along with its signature red muffler, Justimon comes equipped with three separate weapons that replace its arms. Justimon's Accel Arm grants this Digimon incredibly destructive force, their Blitz Arm fires orbs of lightning, and the Critical Arm grants Justimon an energy blade. With its weapons and its heroic spirit, it's no wonder why Justimon is seen as a hero. 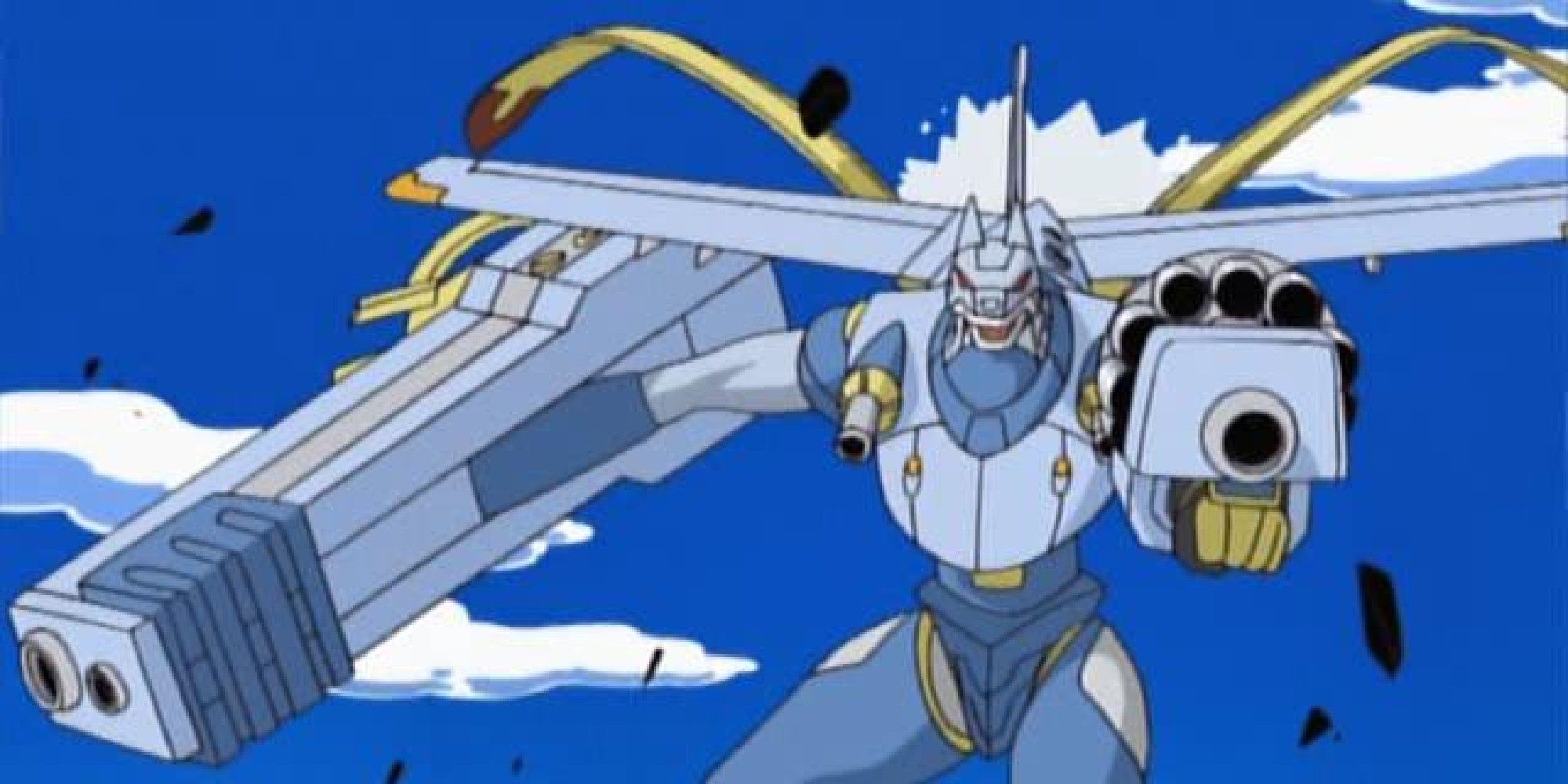 MagnaGarurumon is another addition from Digimon Frontier. With power that eclipses that of the Legendary Warriors, the penultimate form of Lobomon can take on an army by itself. What it lacks in durability, it more than makes up for it in speed and firepower. With the aviation unit equipped to its body, MagnaGarurumon is said to be able to move faster than light speed.

MagnaGarurumon uses three main weapons in combat. Its chest-mounted Charge Phantom, its long-range sniper rifle called the Sniper Phantom in its right hand, and its mid-range rifle called the Strike Phantom. Once MagnaGarurumon has locked on to its targets, it will unleash a barrage of attacks in the blink of an eye, leaving nothing left in its wake. 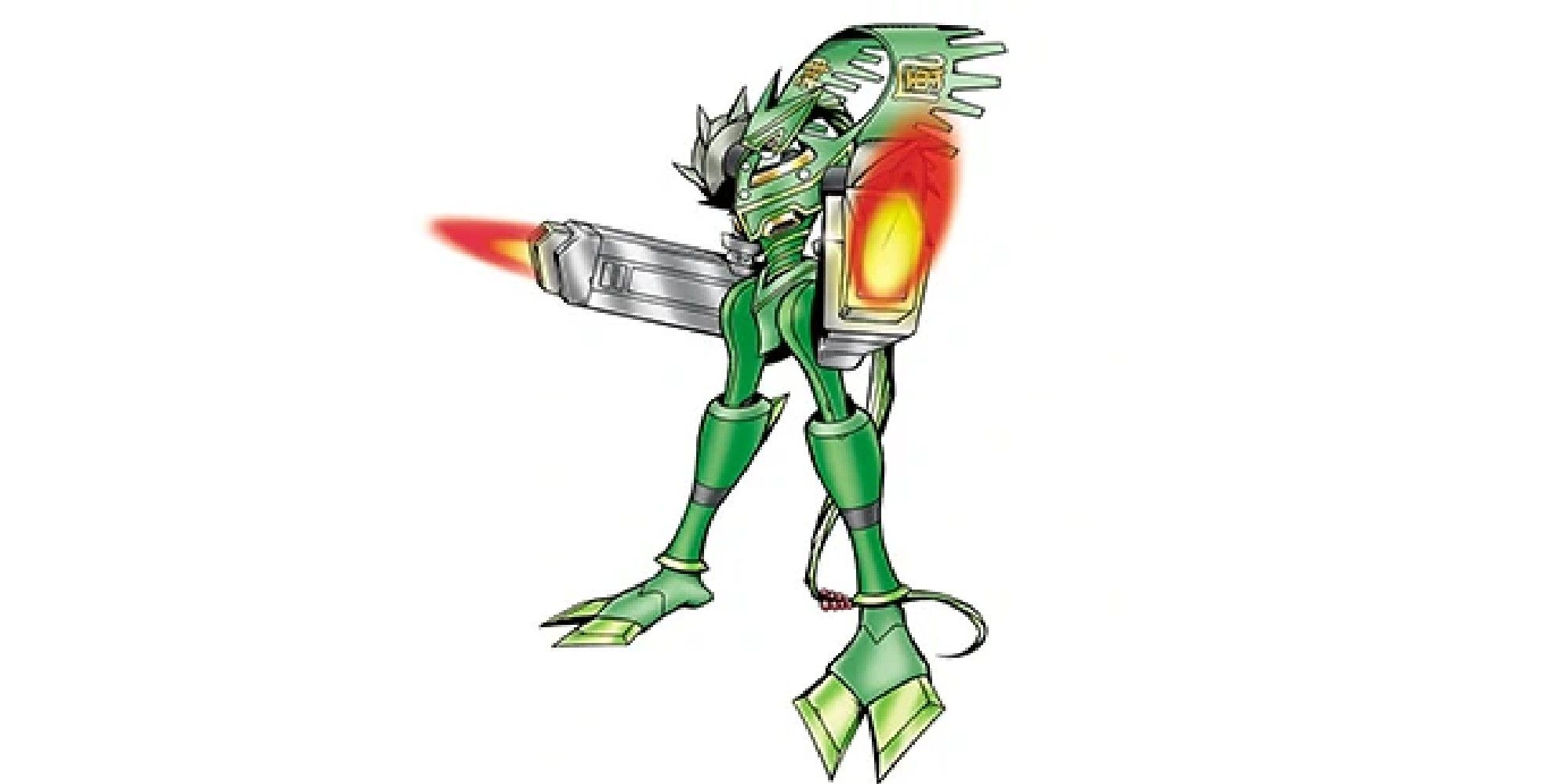 This Cyborg Digimon is the next form of Justimon. Upon evolution, Fujinmon becomes encapsulated in lightweight yet incredibly durable armor and both of its arms become the Critical Arms of its previous form. With its two blades, this Digimon becomes a beast in close-quarters combat.

Fujinmon was said to have been bestowed its name by the Oriental deity of the same name. Like its godly namesake, Fujinmon is capable of generating intense wind to increase its own speed or hinder an enemy. Its ability to manipulate wind coupled with its blades allows Fujinmon to cut through an enemy before they even know what happened. 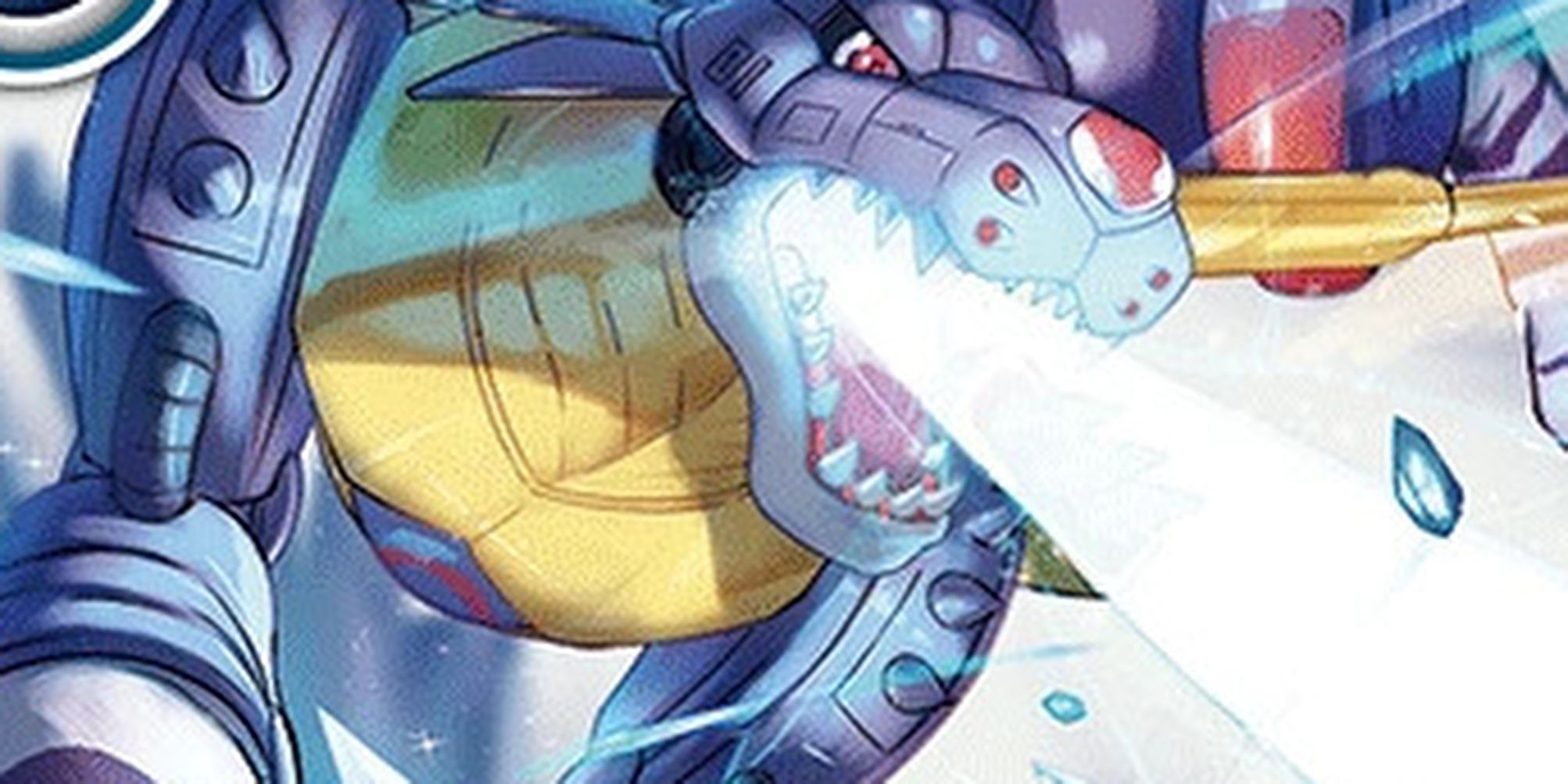 MetalGarurumon is a startling change from the rough-and-tumble look of its previous form, WereGarurumon. Having replaced the majority of its body with metal, and reverting to a quadruped, MetalGarurumon becomes a living weapon, its body hiding countless missiles, explosives, and other weapons. Unlike most firearms, MetalGarurumon's weapons are powered by ice, each one capable of freezing a target in place.

Despite becoming a cyborg, MetalGarurumon doesn't lose any of the heightened senses that it had as a Garurumon. In fact, its senses have only increased with the addition of four laser sights on its snout as well as infrared and x-ray sensors. In the rare instance where MetalGarurumon's extensive arsenal isn't enough, it's capable of releasing beam-shaped wings from its back and shooting at a target at high speed. 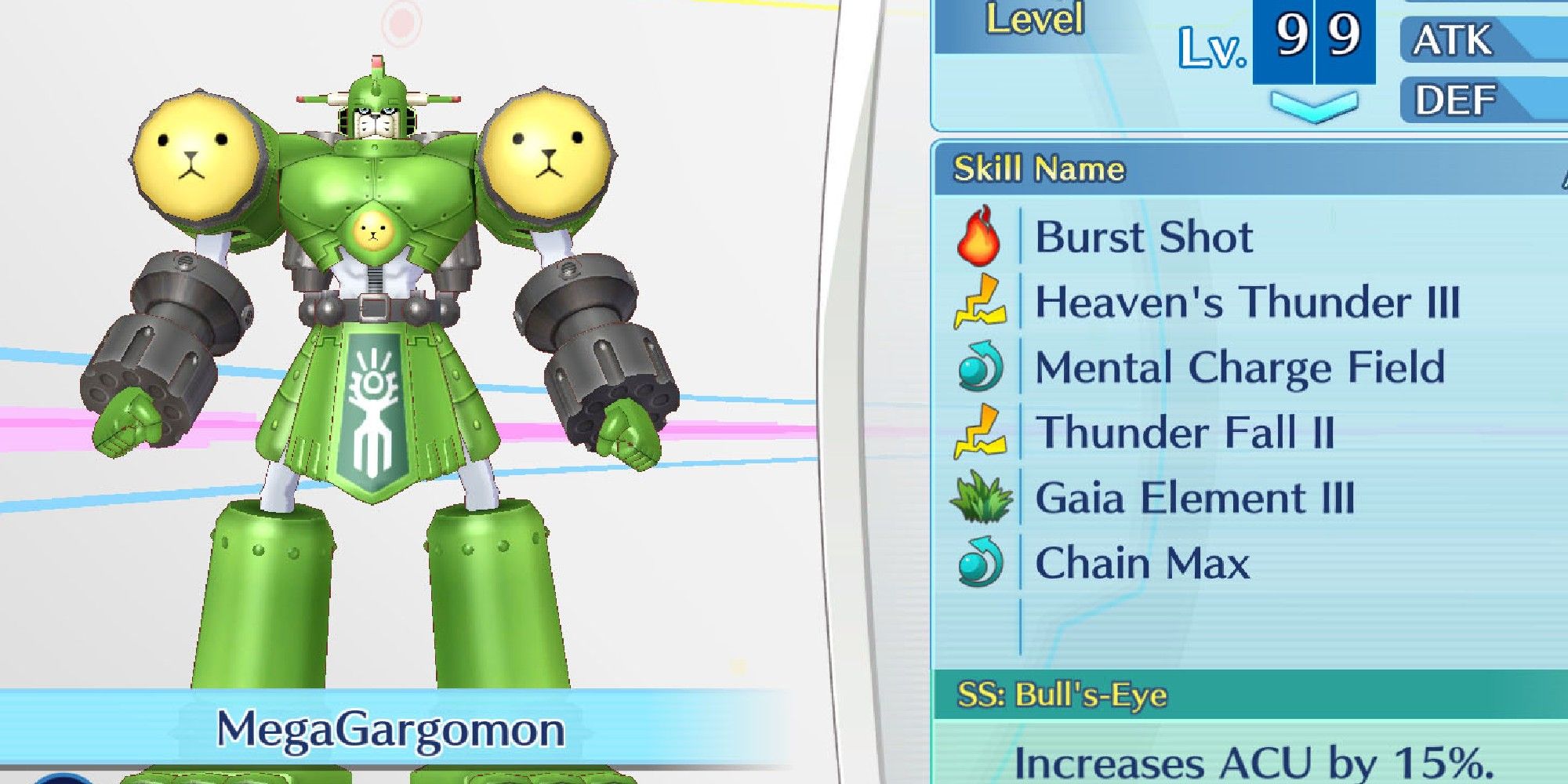 No one expected little Terriermon would digivolve into this colossal instrument of destruction. While this Digimon's pre-evolution, Rapidmon, integrated technology into its body to increase its combat power, MegaGargomon fully converted its being into that of machinery, becoming a Machine Digimon as opposed to a Cyborg type.

This Digimon's method of combat is centered around unleashing its massive arsenal of weapons, which is said to rival MetalGarurumon's. It trades the speed it had as Rapidmon for its impressive arsenal and bulky body, though it does have the means to close the distance on an enemy. Incidentally, where MetalGarurumon is a low-temperature whose weapons reflect this, MegaGargomon has a higher temperature and its weapons are geared towards fire and explosions. 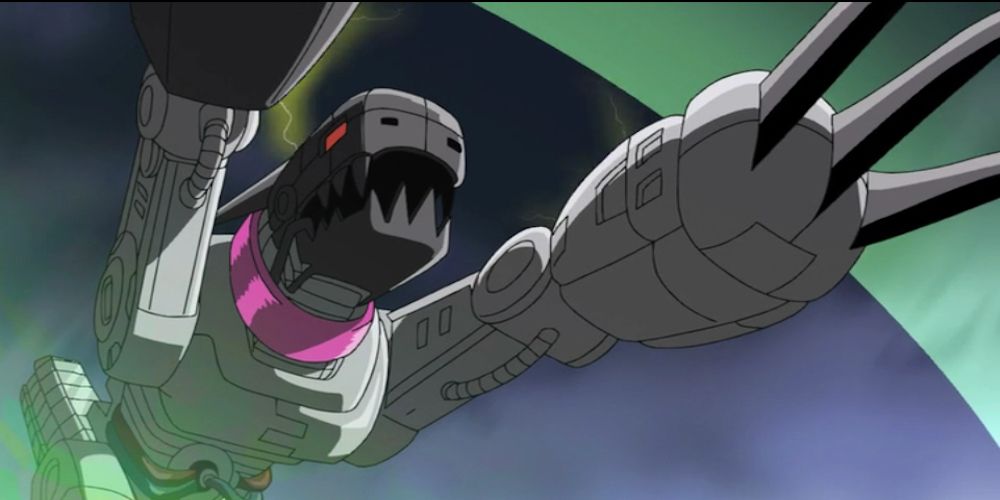 You can't have a list of Machine and Cyborg type Digimon without including the king of the Metal Empire. Machinedramon is quite possibly the strongest Machine Digimon ever made within the Digital World. Emphasis on the word 'made' as Machinedramon was said to have been created using the parts of several Cyborg Digimon.

This Digimon's destructive power is stated to have no equal, and this Digimon's intelligence is just as impressive. Additionally, where fully mechanical Digimon such as Mekanorimon share their will with another, Machinedramon was implanted with a program containing evil consciousness, leading this Digimon to become one of the Dark Masters. As an added note, many believe that all Cyborg Digimon created before Machinedramon were prototypes for the behemoth.