Disgaea 5 had quite an impressive roster. Whether it was the edgy Killia, the beefy Red Magnus, or the focus of this guide – the curry-loving monster girl, Usalia. As far as casts go, it was varied and wonderful, and they all went on their own little adventure of self-discovery. Usalia in particular was a fan favourite.

Now she has returned to Disgaea 6, we get to see how her unique mechanics from the previous game transfer to the new one. In short, they don’t. At all. Usalia has been gutted of all originality and replaced with something altogether different. Does that mean she’s bad? That’s what we are going to find out. 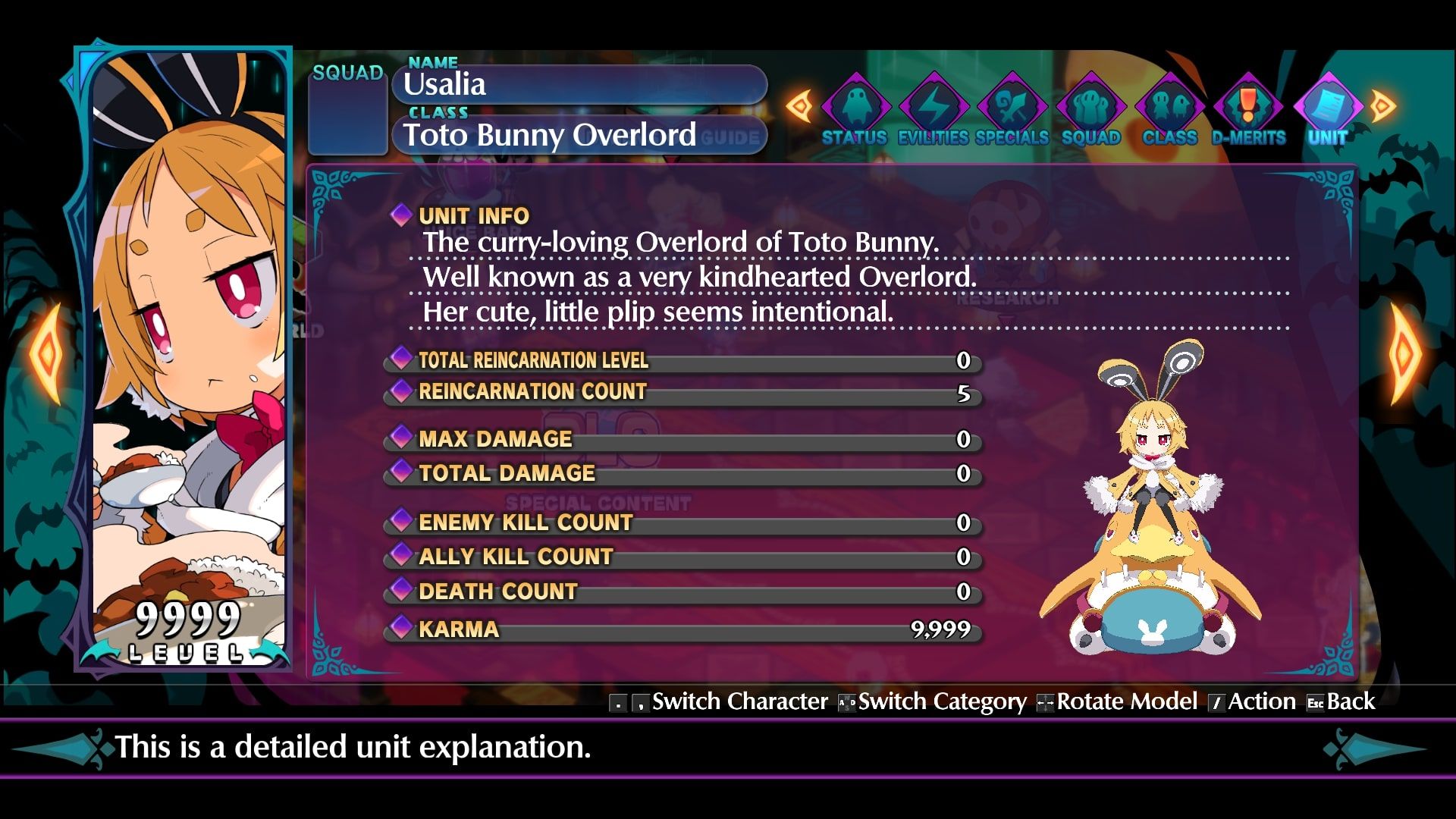 Usalia is from the Toto Bunny Netherworld. After being cursed to be a monster and to only eat Curry, Usalia joined with Killia to go on a Netherworld-spanning romp. Along the way she grew as a character and became an Overlord in her own right. She also says “plip” at the end of every sentence. 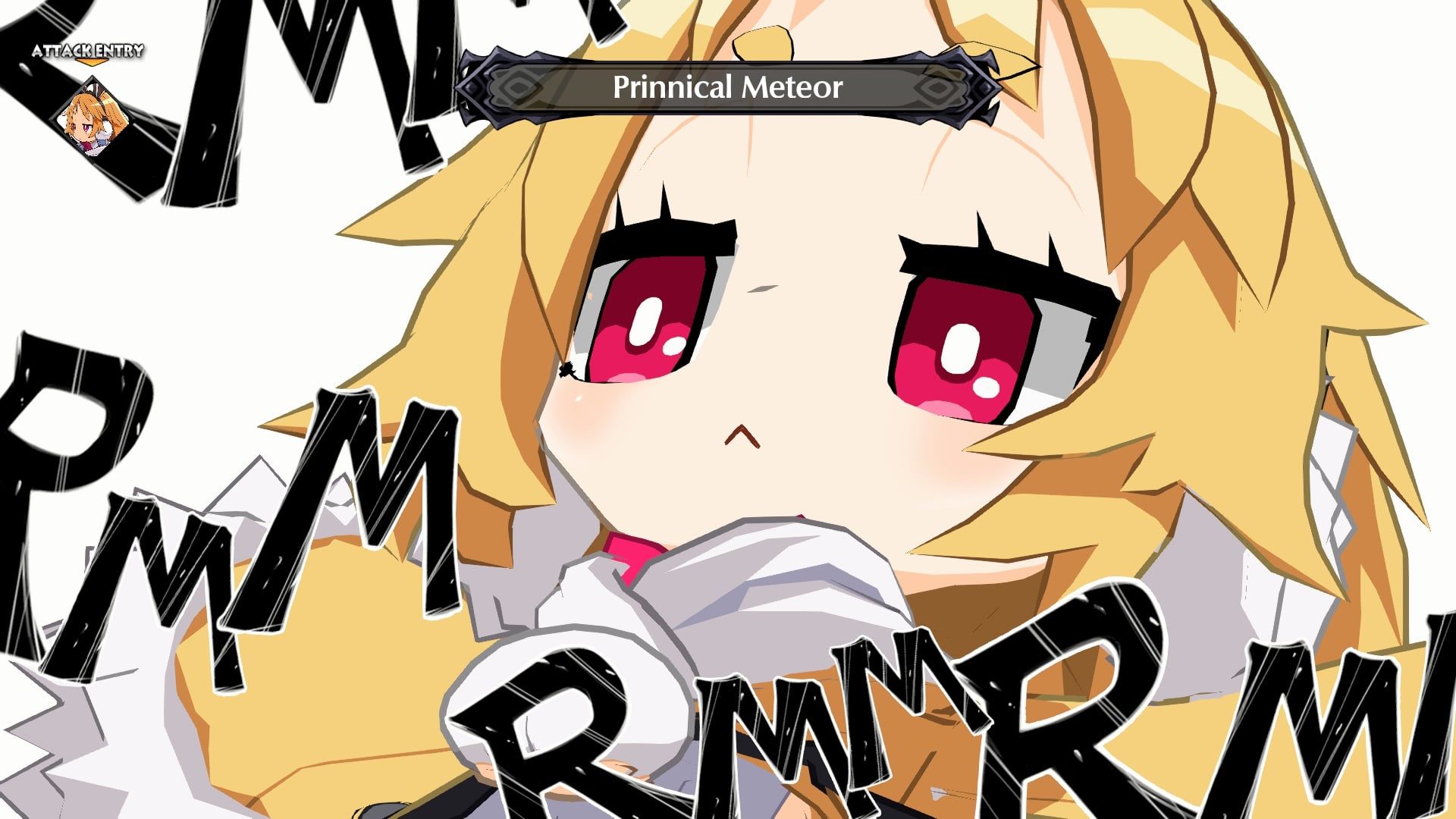 Usalia is a bit of a support piece. She is a big fan of ally clumping and keeping everyone alive with defensive buffs. In terms of her combat ability, she takes a bit of a hit but has access to some pretty interesting moves that make her worth considering.

What Weapon Does Usalia Use? 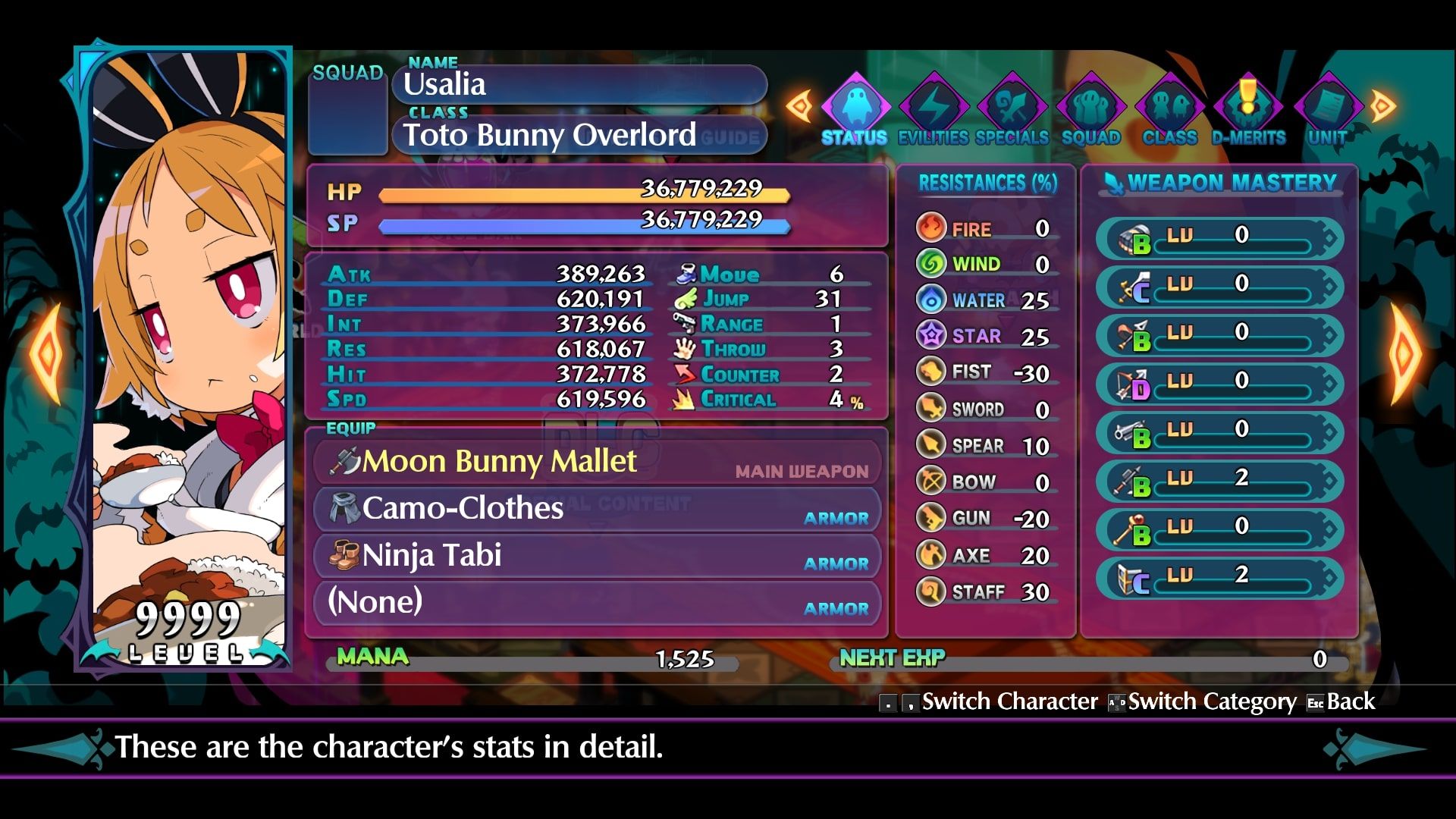 Usalia was, at one point, a Monster. This meant she used a unique style of weapon in previous games. That weapon is no longer available, and this is reflected in Usalias Masteries.

Usalia doesn’t use any weapon particularly well. That being said, Axes are where Usalia should be focusing herself, as all of her Specials scale with ATK. 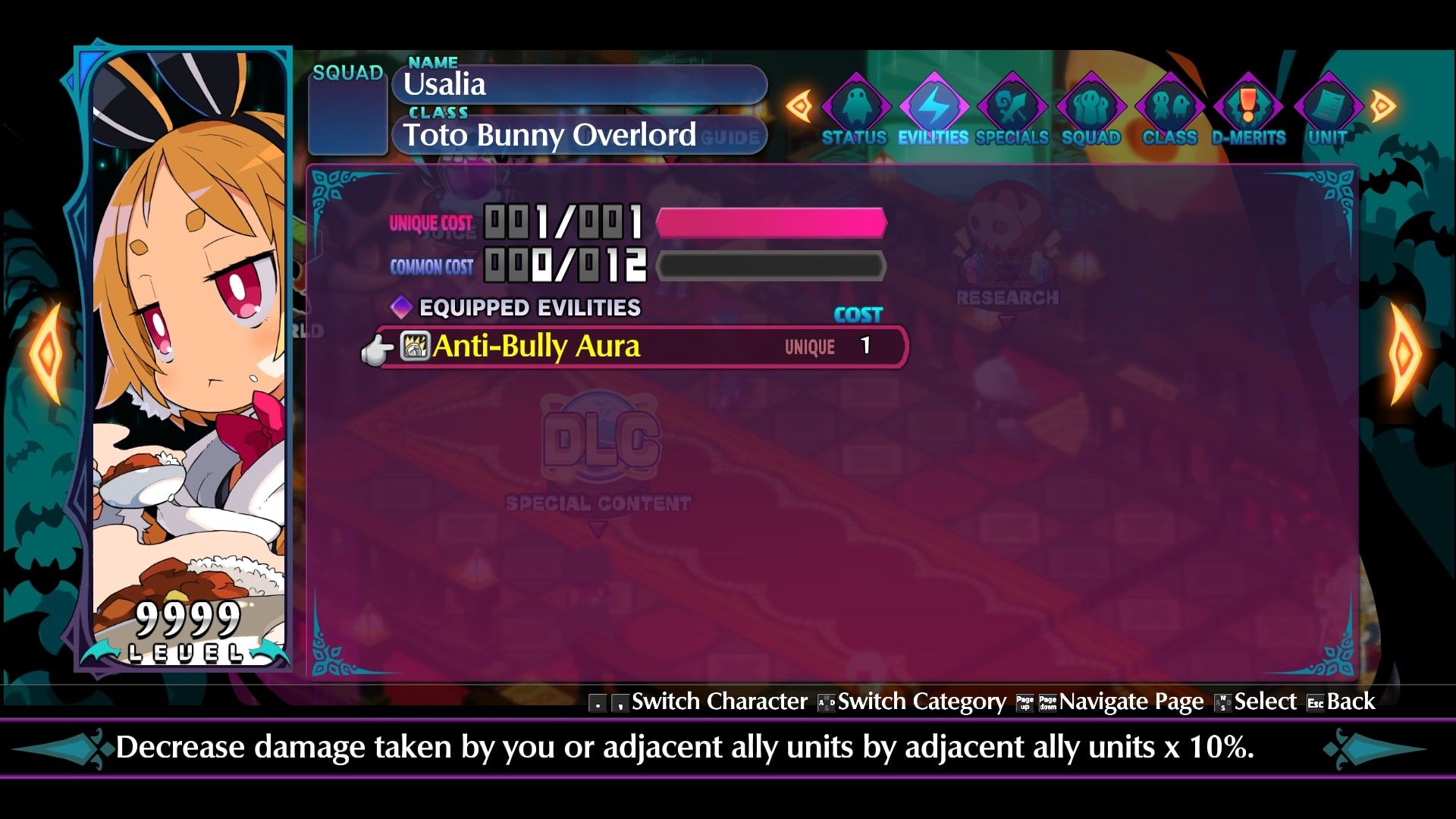 Usalia has one unique Evility.

This buff is surprisingly powerful if you set it up correctly. Usalia herself can reduce all damage she takes by a whopping 80 percent, making her nearly unkillable. Not only that, but since she applies this buff to her allies too, they are often sitting on a 50 percent reduction. Very few Evilities provide this much of a bulk increase, and it can lead to your party being able to tackle threats they really shouldn’t be able to. 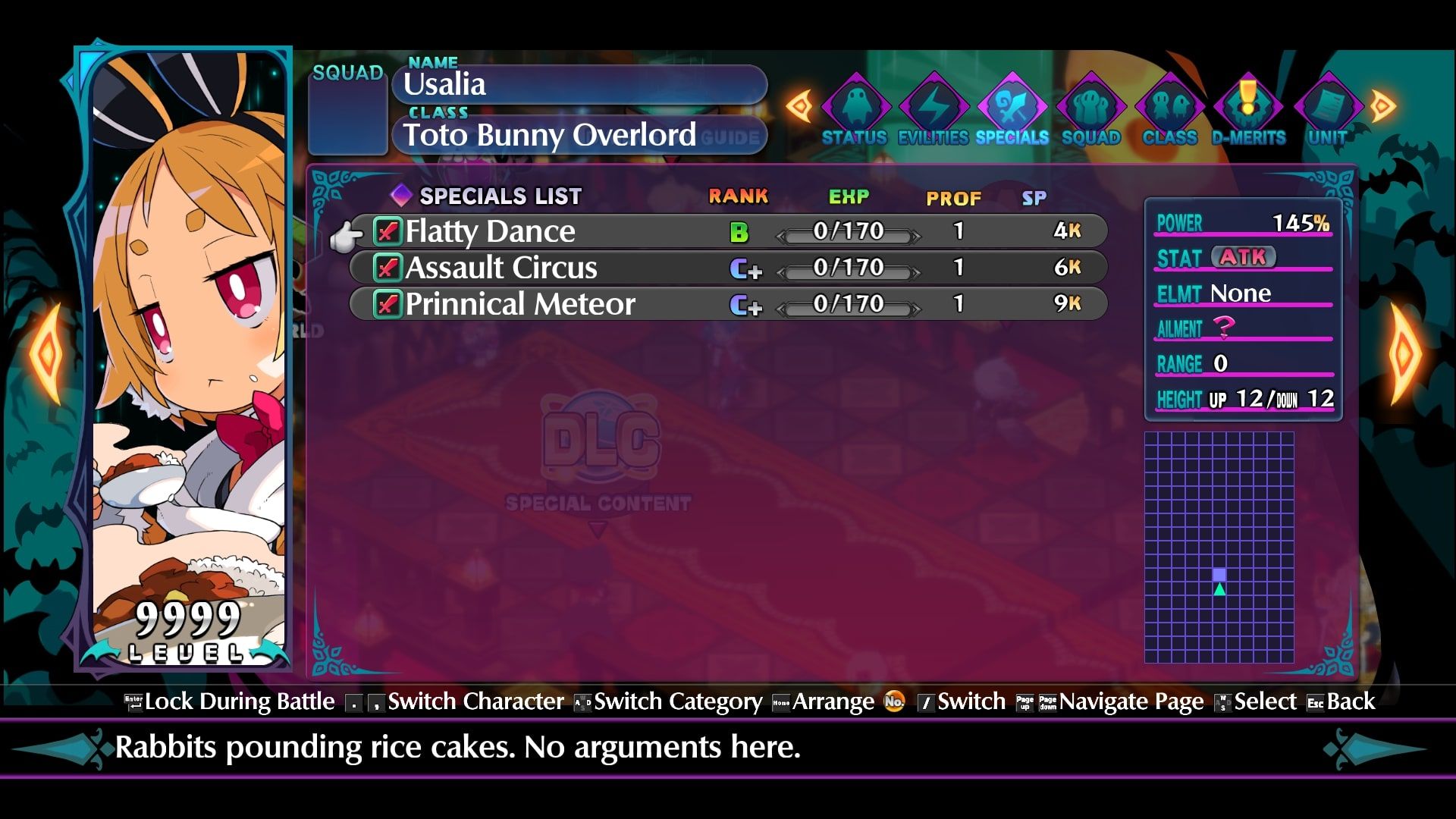 Usalia’s kit allows her to do a lot of things well. Her Evility lets her stay back and buff, or support from the frontlines. Either option works and her Specials reflect that too. Flatty Dance is her most powerful attack since it is a single-target nuke. It isn’t as powerful as the best moves in the game of course, but it can do work if Usalia is rocking a decent Axe.

Assault Circus and Prinnical Meteor are her ranged options, and they are pretty good. Of the two, Prinnical Meteor is the best as the AOE damage it provides is pretty darn good. It also deals Star damage, so it bypasses some element defences, which gives it a bit of a buff. Damage is not phenomenal, and there are better 3×3 attacks out there, but as a total package, Usalia does work.

How To Use Usalia 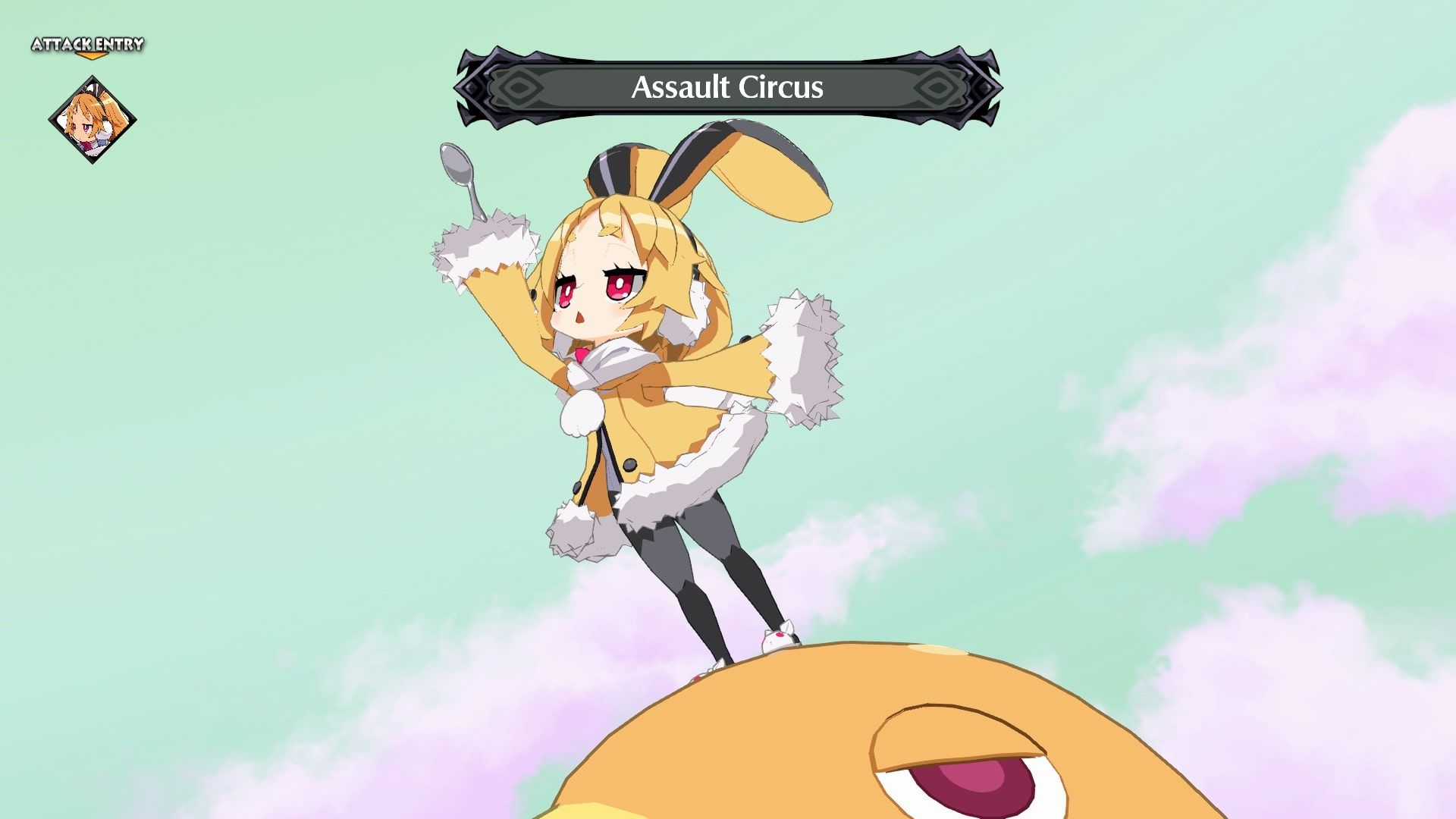 Usalia is a good pick. Her kit is more than strong enough to justify a slot. Her Evility can do a lot of work in the right team, her attacks are varied and useful, and overall, she does what she was designed to do. In a boss scenario, you want her upfront and throwing out Flatty Dance. Against groups, Prinnical Meteor from a distance is perfect.

In either instance, you want to make sure Usalia is surrounded by allies at all times. This will increase everyone's durability substantially, and if you are not constantly making the most of the buff, there isn’t a reason to take her.

The only noticeable downside to Usalia is her gender. Being female, she can’t benefit from male-only buffs from the likes of Melodia. Thankfully, she is classed as a “flatty”, so she can join the Flatty Squad and will gain some bonuses from there to make up for it.