The Constant is a dangerous place to reside, but you already knew that when you got sucked into it in the first place. There are countless dangers in Don't Starve Together, and starving is actually the least of your worries.

Your best chance of long-term survival is to establish somewhere safe you can call home, with all your most precious loot and place to rest your head. But Charlie's world isn't about to stop chasing after you at your base boundaries, so it's time to get smart and fortify or else you'll end up like those of the ancient civilization before. 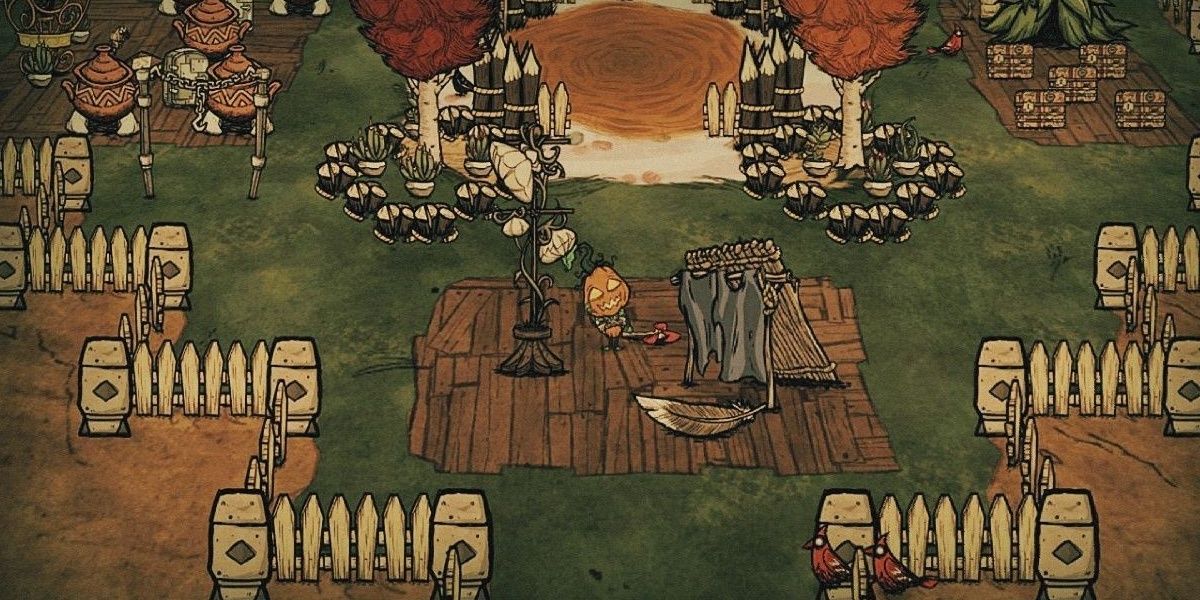 The biggest early-game enemy that no one is invulnerable to (though Winona gets a free shot) is Charlie. Your amor and weapons mean nothing if you forgot some Grass and Twigs for a Torch. There are plenty of ways to provide temporary light within your base, but if you're serious about keeping Charlie at bay there are some fancy items that will make this danger a thing of the past.

Furnace components drop from the Dragonfly, providing a constant source of light and warmth, though the radius is small. Defeating Toadstool will bag you the bits for Mushlamps, beautiful and elegant, they can change color depending on the Spores placed in them. If you want to live in the Caves, then Lightflowers can be a great option, though they do cycle on and off individually. 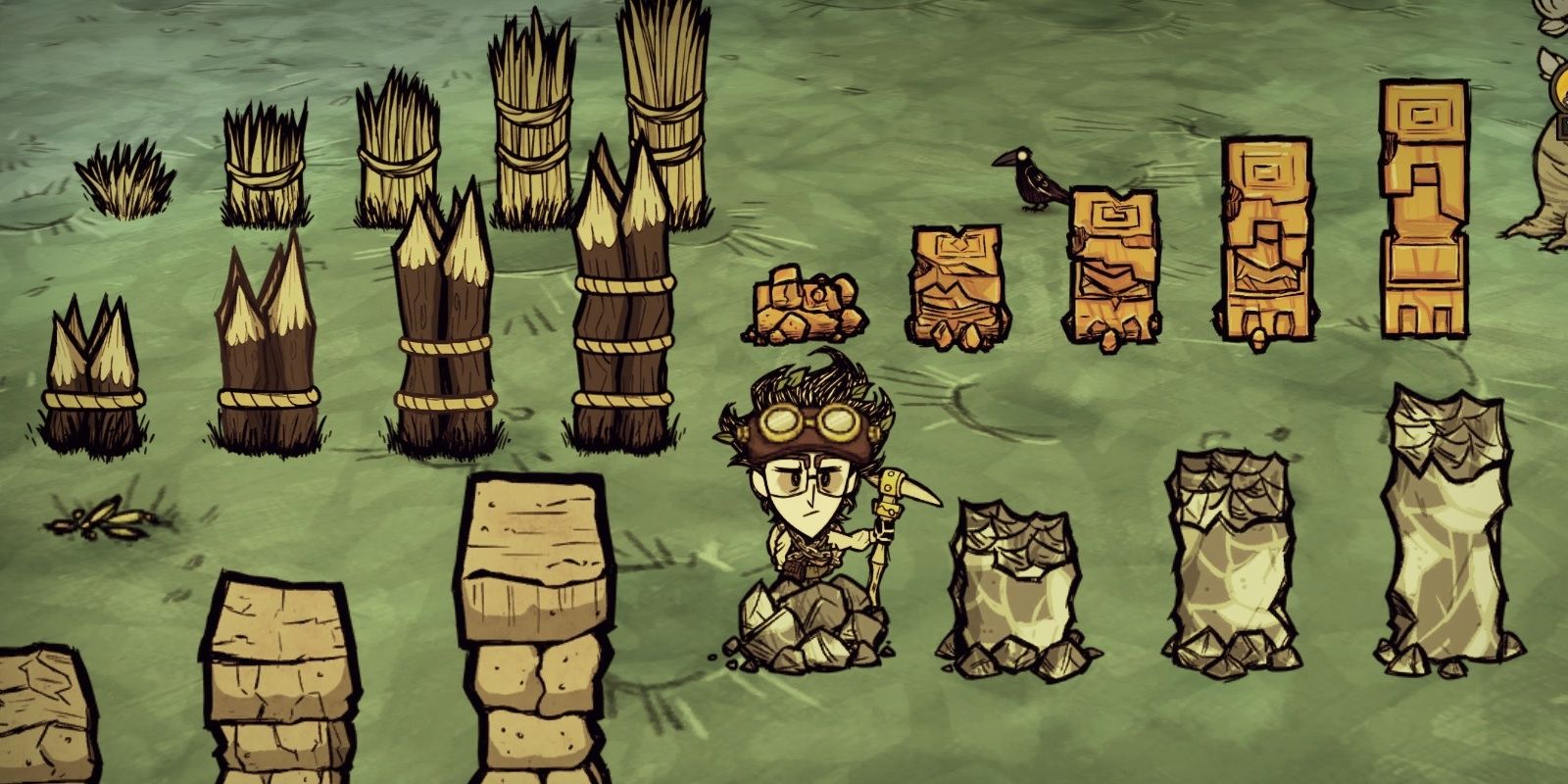 Not just for keeping your livestock in one place, walls are accessible at most stages in the game, with the highest tier being Thulecite which is only renewable through Crafting Amulet tricks and Dust Moths. Each wall comes in four sizes and there are five types with different levels of durability.

Walls aren't going to last forever, even Thulecite ones will need repair, and unless you deal with the enemies outside the walls they will eventually break through. It's advised to combine walls with some other strategies, such as ranged weapon attacks, Tooth Traps or other mobs. 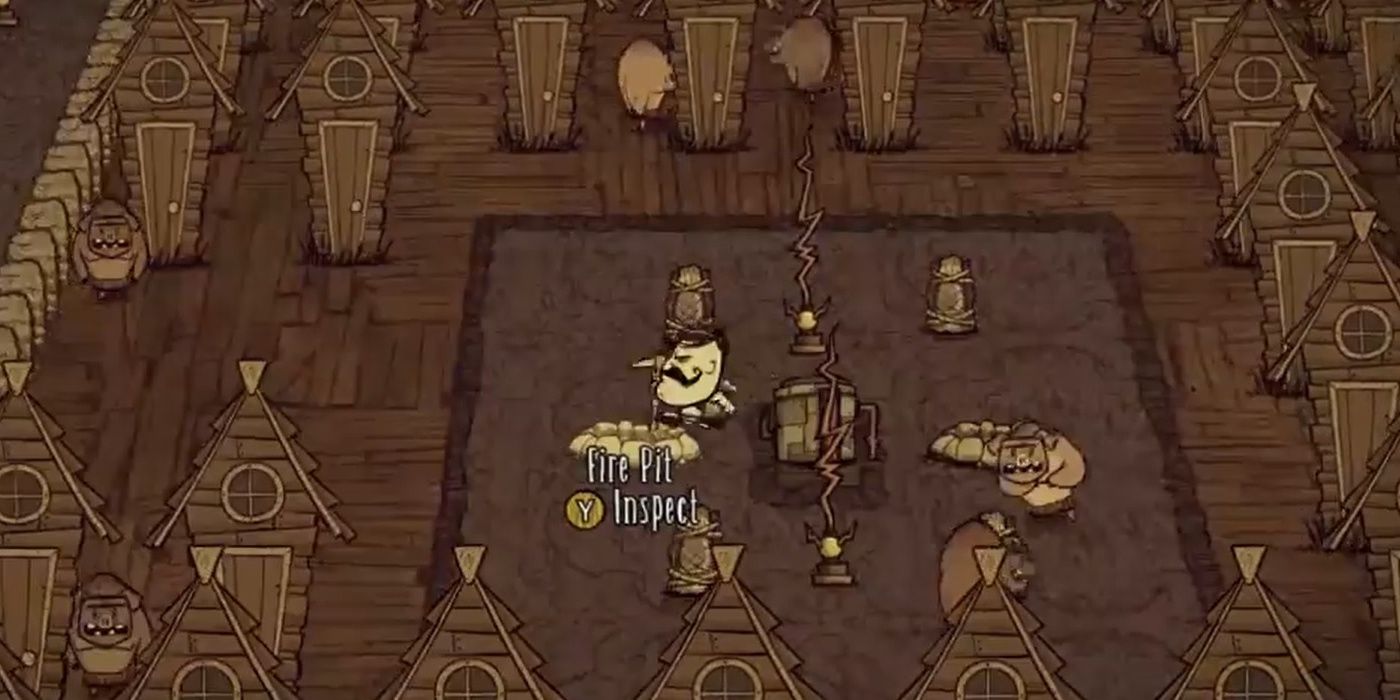 Speaking of other mobs, there are plenty of neutral entities living out their warped lives in the Constant, waiting to be exploited and bribed. Pigs are a great choice during the day, patrolling their territories and attacking "evil" mobs with a decent kiting strategy. In the evening and at night Bunnymen are your best bet. They sleep all day and will roam for evil at night, attacking similarly. But be warned, they are staunch vegans, and if they smell animal products on your person you'll be in for a world of pain.

Other mobs automatically attack their own enemies, which can be used to your advantage. Beefalo swarm on anything that hits one of them, and during heat they are the most aggressive mob around. Frogs start fights, but they can finish them too, so Ponds can be a useful feature. 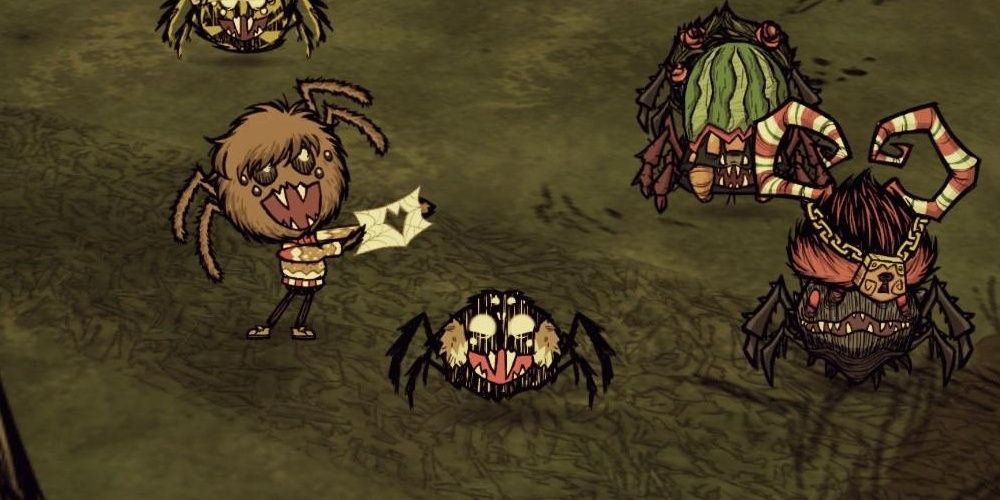 Why bother building Hutches and bribing stupid Pigmen when you can be spider king? Webber is neutral to all Spiders, but can befriend them with meat or Den Decorations. Walking on Den webbing doesn't slow him down, unlike all other mobs, which can make for a very useful base flooring. Using a Webby Whistle, Webber, the boy of two souls, can call out all nearby Spiders and ready them for war.

Snickerdoodles mean Webber can customize his army too, turning Spiders into Cave Spiders, Nurse Spiders, Warriors and much more, each with unique benefits. He can even pick them up to relocate where they're better needed, making Webber an amazing base builder. But when it comes to team survival he might not be the best option. 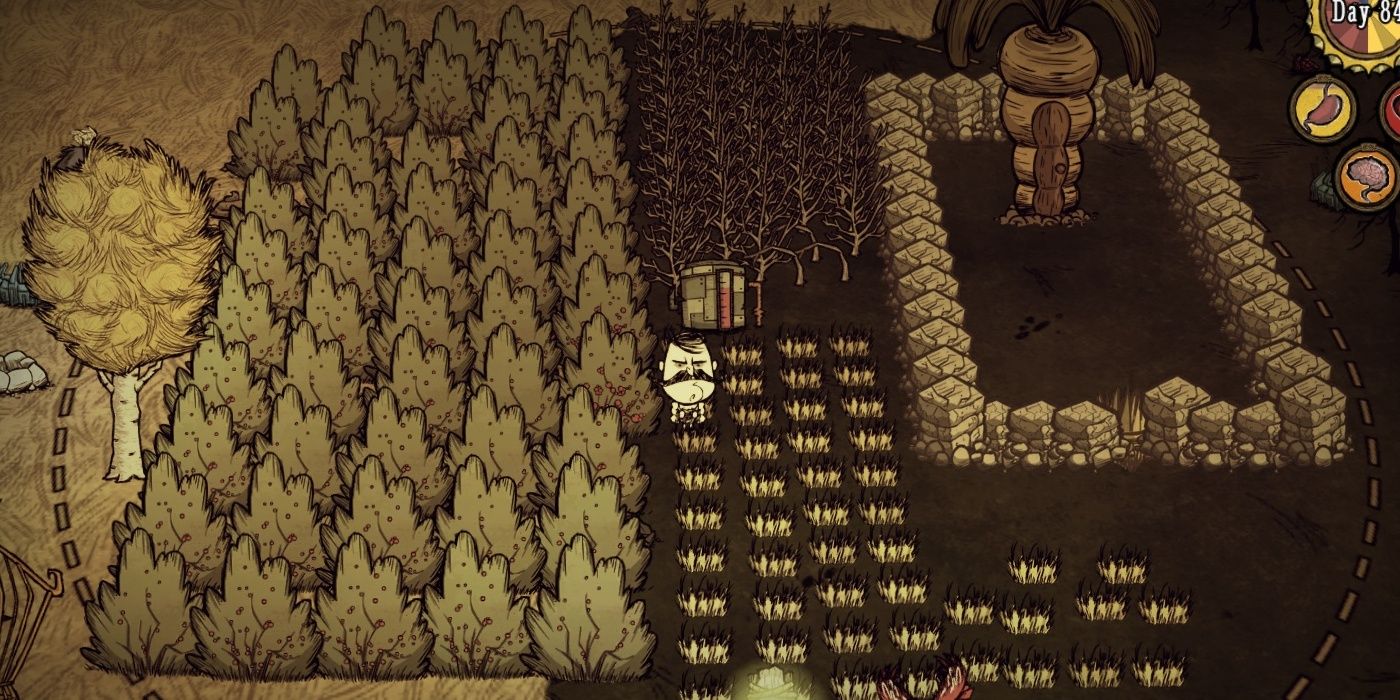 Not only do Ice Flingomatics put out wildfire and save your base from Fire Hounds, they can be used to freeze mobs solid before they do any harm. Ice Flingomatics work by detecting the temperature variations within radius, and if an entity (be that a Grass Tuft or a Butterfly) exceeds 60 degrees Celsius it will fling snowballs that way, freezing enemies and even players.

This can be used to your advantage by building an area of broken Grass Walls, setting them on fire, and leaving an Ice Flingomatic to shoot the smouldering structures, hitting any mobs nearby. This sort of trap can be set up outside a fireproof wall and used to destroy large waves of Hounds or as a meat farm, allowing the player to beat up mobs while they're frozen solid.

5 The Sentinels Have Eyes 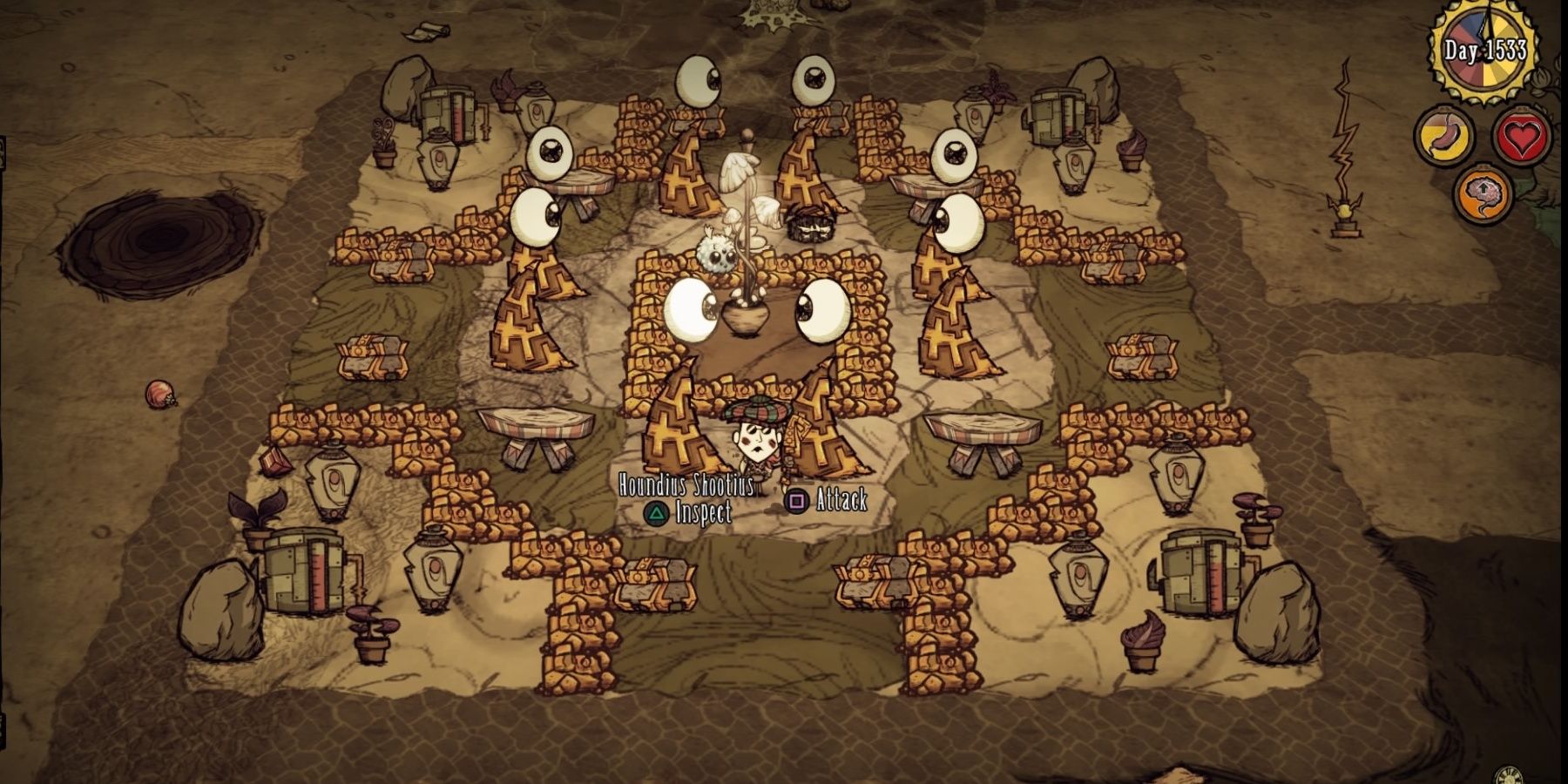 It's a bit of a hassle to make, but a structure designed to defend your base and do it well is the Houndius Shootius. The ancient magic animates an Ancient Guardian Horn affixed with a floating eye of Deerclops which then shoots high damage lasers at anything aggro-ed to its maker. It has 1000hp but needs time to regenerate that, so keeping it safe from what it's attacking is a good idea, otherwise all those valuable crafting components will be destroyed.

It can be healed using items usually used on players, but building a strong wall around one and placing Hound Tooth Traps at the perimeter is the most effective way to destroy angry mobs.

There are plenty of biomes to settle down in, each with benefits and negatives. Building your home and all your most precious structures in the path of meteors isn't going to keep anyone safe, and the Lunar Island is deadly during Hound waves as nothing there stays dead. Swamps are high risk, high reward in that if you can avoid the tentacles yourself you'll have a defender that doesn't have any allies.

However, some characters will struggle even more in biomes otherwise pretty safe. Walter is allergic to bees, so while the occasional sting in the Bee fields isn't an issue to most, for Walter it's a bigger problem. Similarly, Wolfgang loses more Sanity than most in the dark so living in the Caves is going to be hard to combat.

3 Wortox, Webber And Wurt, Oh My

Other characters that have a particularly hard time in usually safe places are the "evil" ones. Species in the Constant that are typically considered the bad guys get attacked by most mobs, however these three weren't like the rest. Wortox was cursed to eat Souls and has rejected his nature. Webber is actually just a little boy, sharing his body with a Spider, and in Don't Starve it is possible to find the child's skull still.

Wurt is a Merm that wants to learn rather than fight, though she is still loyal to her king. All of these PCs will be attacked on sight by Pigmen, Bunnymen and Catcoons so using these mobs won't work as protection. Wurt can rely on her Merm buddies though, and can even spawn more guards, she also thrives in Swamps. Choose your character carefully and consider nearby structures if you play one of these three. Pig Houses, Bunny Hutches and Hollow Stumps are now dangerous to you.

In a game where you can succumb to perma-death, there's no cowardice in saving your behind and getting out of the danger zone. Sometimes your base will be overrun with Hounds, your safety measures destroyed by fire or a Frog Rain will end your game. In such cases, it's perfectly reasonable to equip a Walking Cane and disappear down the gullet of the nearest Wormhole.

It's a good idea to have Cobblestone roads leading to a wide open space full of Tooth Traps, with a Wormhole at the center which spits you out far away. Mobs won't follow you down there, and it's possible they'll despawn before they would reach you on foot. Make sure you know where the other end comes out, and that it's far enough away that you won't retain enemy aggro. 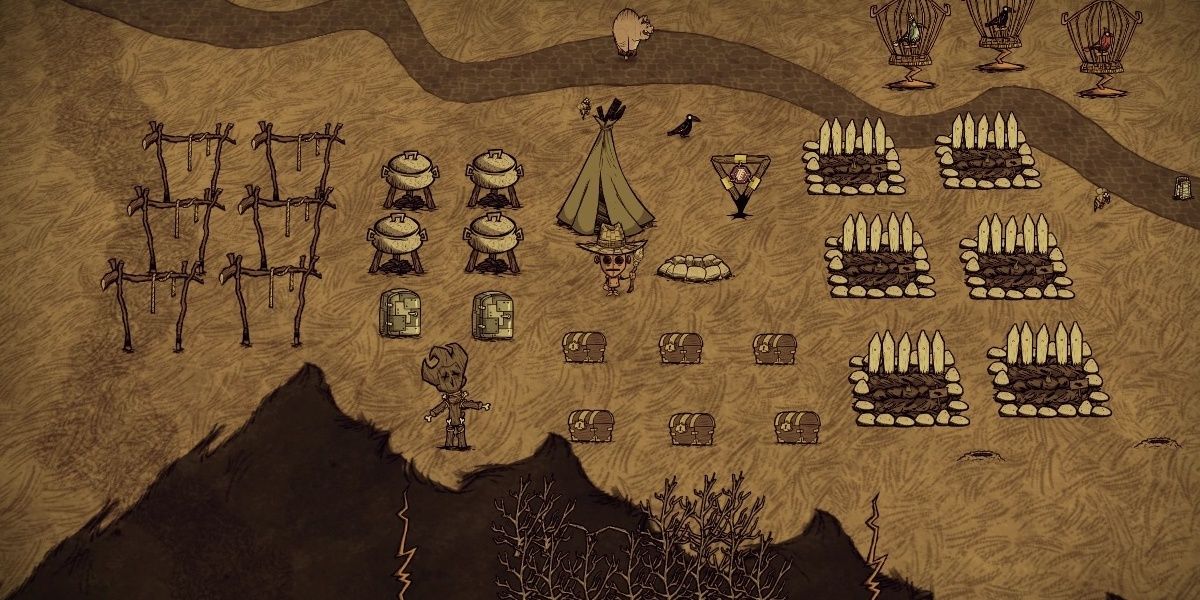 Having a mini base at the other side of a Wormhole is a great idea, because sometimes your main base needs to be saved, or even abandoned. By keeping a stash of armor, weapons, basic resources, warming and cooling pits, and non-perishable foods you can ensure the continuation of your game even if everything else goes wrong.

Being able to revisit your main base all geared up will give you a much better chance at minimizing the damage and loss, and it'll be less likely you'll end up dying too. Keep means of resurrection at your back-up base so that you can respawn somewhere safe if you died in your main compound. At the end of the day, you can always make a new home.