As one might imagine, the idea of physically killing God is a tough one, even in a video game where all things seem possible. After setting their sights on demons for so long, Doom Eternal Ancient Gods Part 2 flips the script and completes the journey that started in Part 1. Killing demonic beings is cool and all, but how about taking down the creator as well?

As suspected, it’s not an easy task. It’s nowhere close to as difficult as the last boss in Ancient Gods Part 1, but there aren’t any new mechanics in that fight. It’s difficult, but straightforward. On the Dark Lord, some of the game’s most experienced veterans will get stuck on phase one for hours without making any progress. This guide will turn this grind of a fight into a pleasant experience. 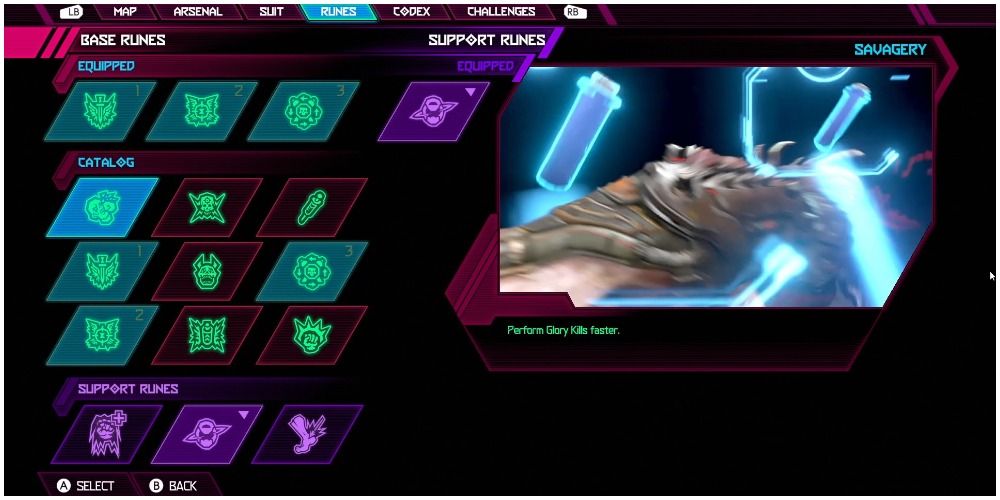 While many demons will surface during this battle, almost none of them need to be engaged directly. The only ones that are worth the bullets are the stagnant Zombies. There is plenty of ammunition all around and the Zombies themselves can be a source of even more ammo and armor. 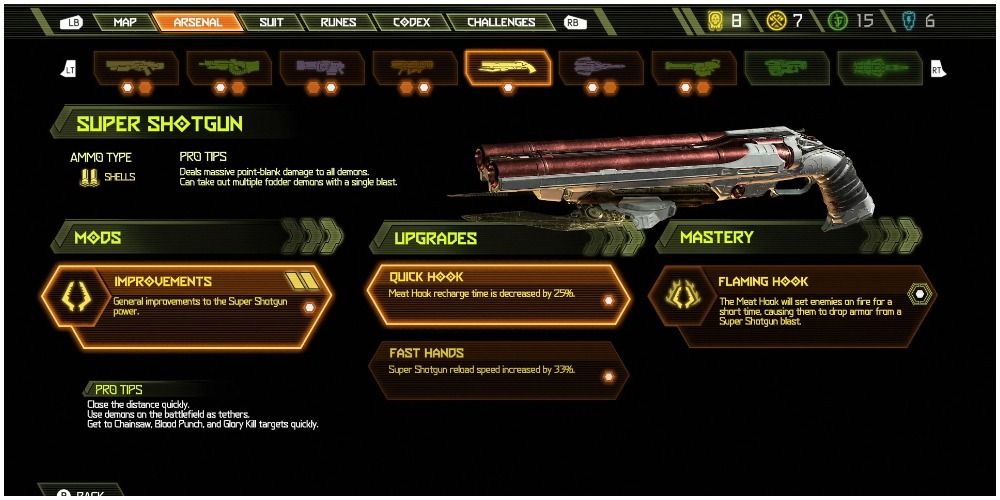 The mastery on the Super Shotgun allows the Slayer to gather armor from any demons they have hooked. And the hook itself is handy with mobility. Players will be taking tiny amounts of damage throughout the fight, so being able to keep it all topped off with the Super Shotgun is vital. 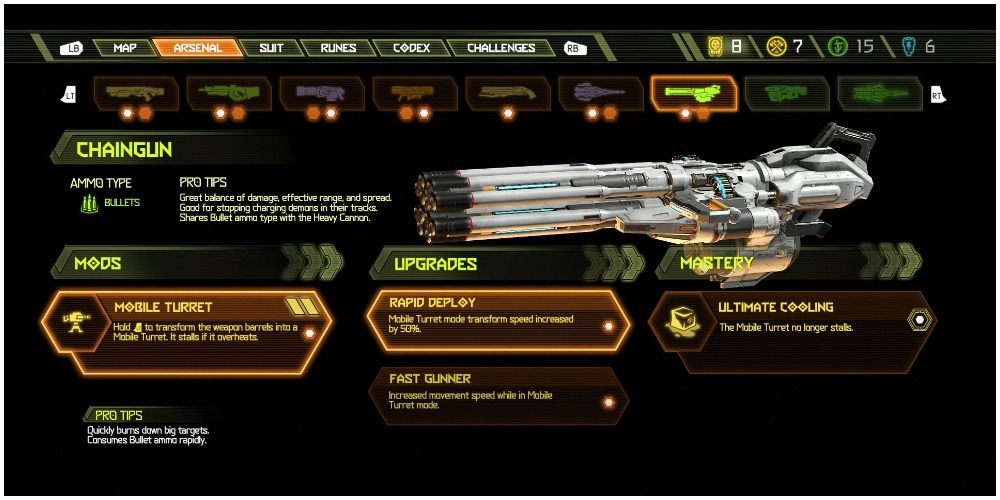 The Mobile Turret mod for the Chaingun has the best raw DPS in the game so long as the target isn’t moving. Indeed, the Dark Lord will frequently be rendered immobile, so the best way to maximize these moments is with the Mobile Turret. Usually, the way this weapon consumes ammunition makes it hard to recommend, but this fight makes it difficult to run out of ammo, even for players who try to run out.

Unfortunately, because there isn’t any jumping or platforming, none of the normal runes offer much of an advantage. The Take Back rune can help immensely. If a demon kills the Slayer, simply use a hammer charge to kill them instantly and take back the extra life.

Phase One – Learning The Dance 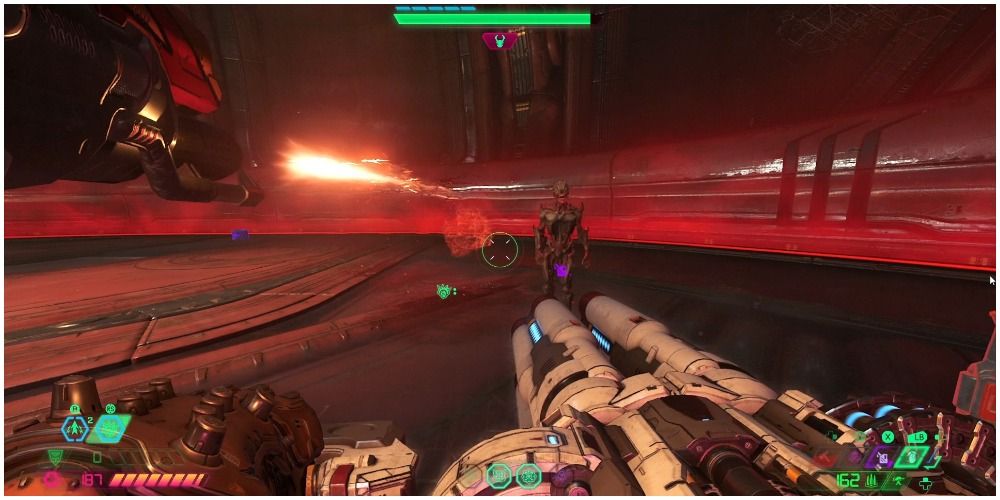 Each phase besides number five adds a layer of complexity, but the basics are identical. Those who master this phase will experience minimal difficulty during the next phases.

Stay away from the Dark Lord unless you have a hammer charge ready to go. He will shoot lasers that do almost no damage; in fact, so little that using a Zombie as a shield is fairly effective. They can absorb many of these hits before going down. Stay mobile on the outside, using a Chainsaw on Zombies every time it’s up and doing the Meat Hook/Super Shotgun blast combo when it’s on cooldown. 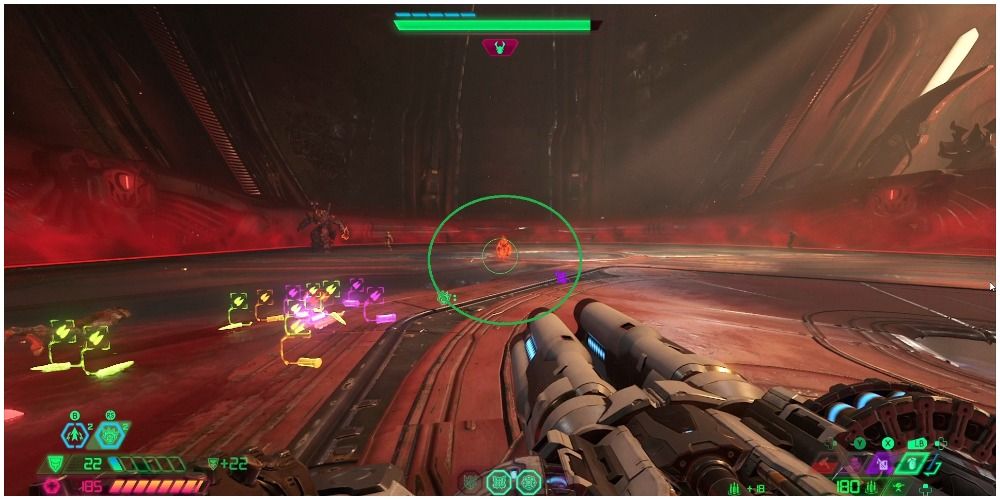 To acquire a hammer charge, kill two of the hounds that the Dark Lord spawns. These hounds have very little life and can be killed by a single blast from the Super Shotgun, even at range. 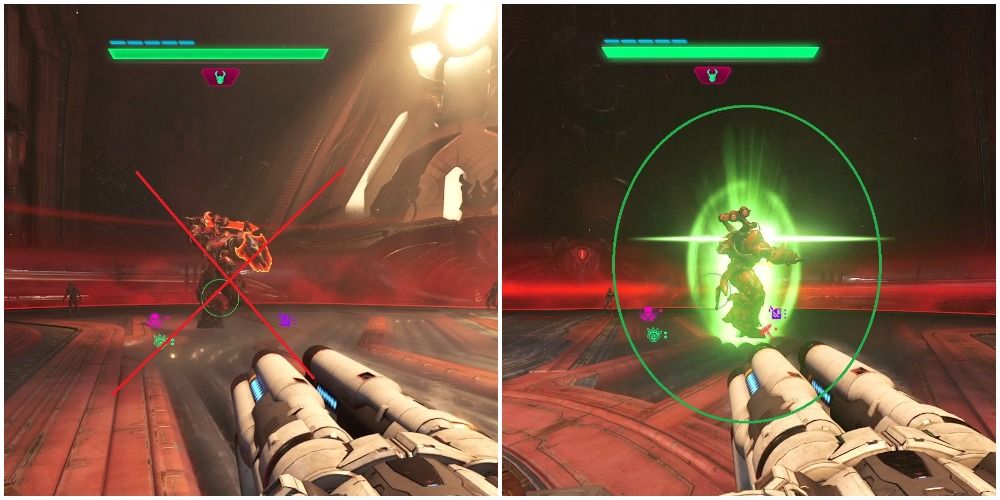 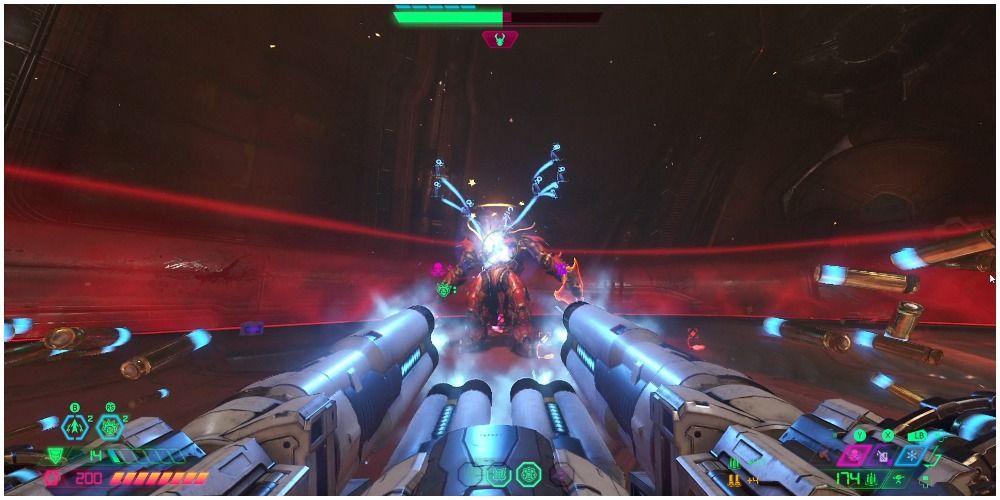 This sets off a combo in which the Slayer will need to use three different weapons. After firing the Super Shotgun, the Dark Lord will be briefly staggered. Use your hammer on him to stagger him again, this time for a longer time. Then whip out the Mobile Turret and blast him until he wakes up.

After repeating this enough times, he will fall (just make sure to dodge his melee attacks so the Dark Lord doesn’t heal the damage done to him) and it will be on to phase two. 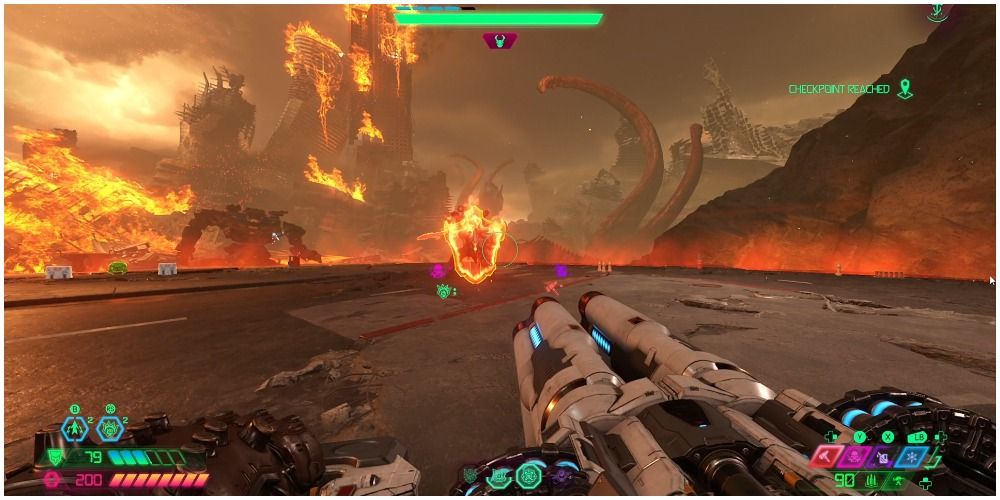 The environment will change after a cutscene, but very little else will. The stagnant Zombies will still be in the same places and the technique is identical.

The boss will add a shield charge to his repertoire that has a life steal just like his other melee attacks. To dodge this attack, dash to the left or the right twice. Dashing backwards will not work because he will charge across the entire arena. And dashing only once won’t work, he follows up his charge with an immediate melee attack. 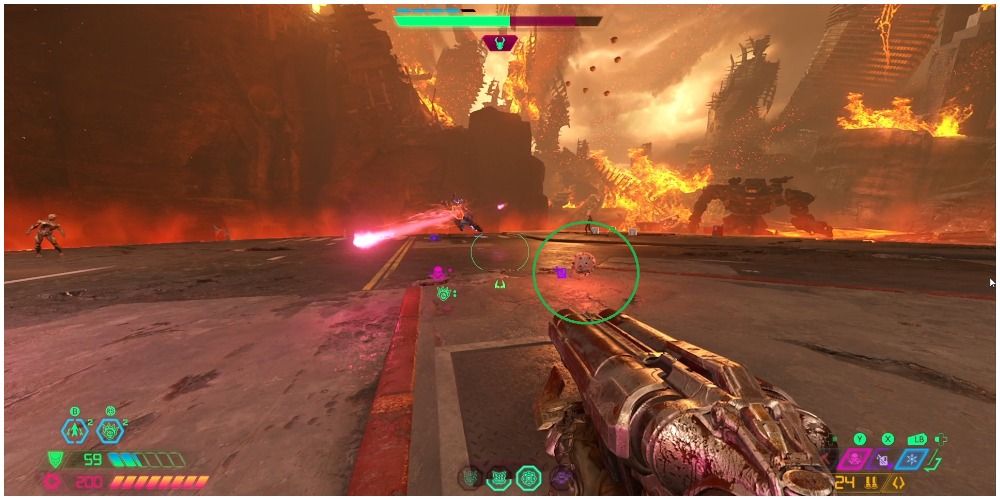 He also adds a rolling mine attack when he’s ranged, which does a little more damage than his lasers, but if you stay mobile, it will miss every time. It does not do enough damage to adjust tactics for.

The second and third phases are identical. 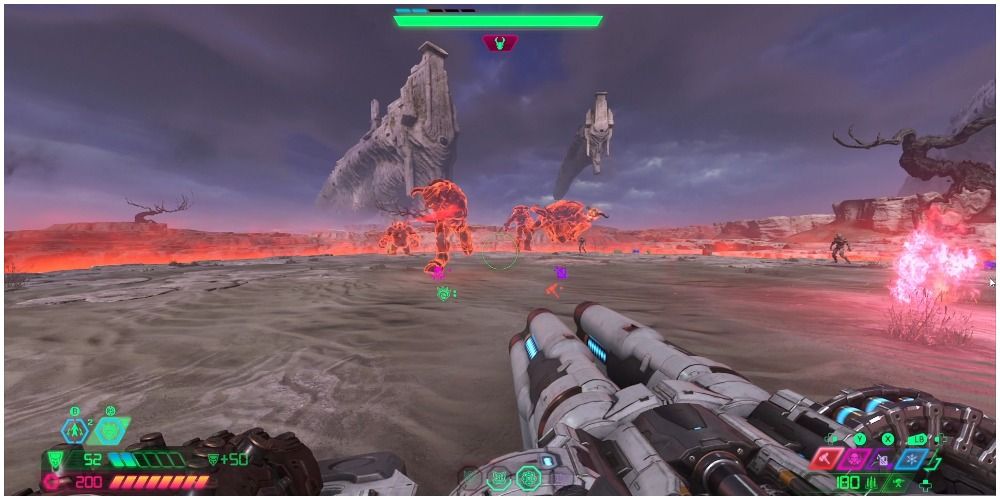 Again, the environment will change, but the layout is the same and the tactic to beat the Dark Lord will stay the same.

During this phase, the Dark Lord will spawn multiple powerful demons. Do not directly attack these adds. They take up time to kill and the Dark Lord can instantly replenish their numbers.

The hammer will instantly kill any add that is caught in the blast. It’s alright to kill some but not all of them, because if a few of these adds are still alive, the Dark Lord won’t create more. 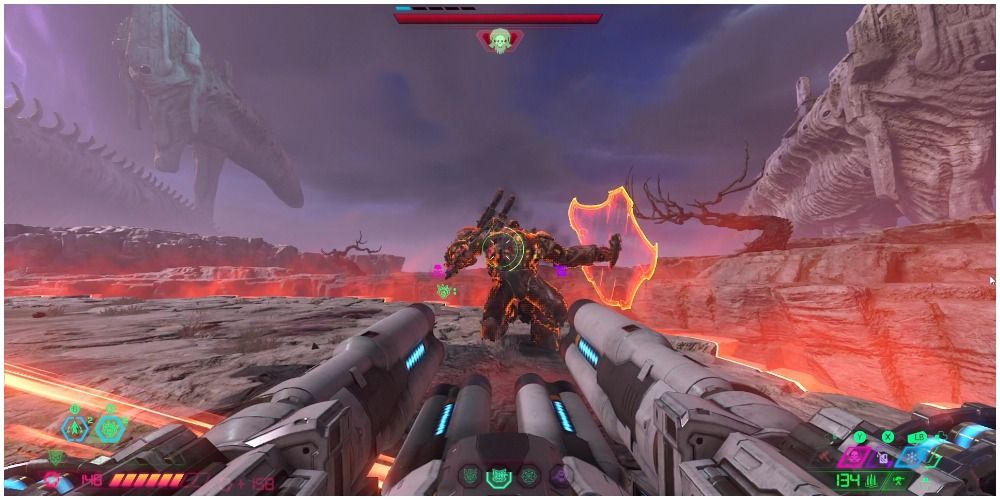 Once again, these final two phases are identical. Give the Dark Lord one final glory kill and it’s all over.