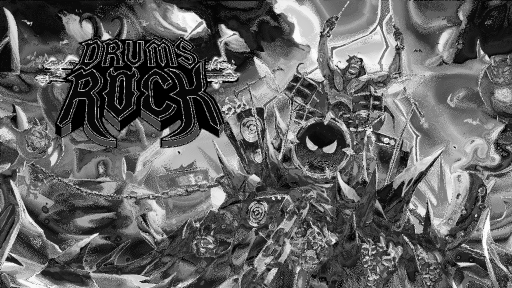 Drums Rock is smashing its way onto another platform, with developers Garage51 confirming a release on PSVR 2.

The announcement came alongside a new trailer, detailing the game options and songs that will be available at launch on PSVR 2.

Drums Rock will take advantage of PSVR 2’s headset vibration to offer increased rumble when playing the drums, which should hopefully offer increased immersion so you can feel like you’re behind the kit at a roaring concert. Garage51 also says that the improved controller haptics on PSVR 2 will give each piece of the drum kit a different feel while playing.

However, perhaps one of the coolest new features coming to the PSVR 2 version is the implementation of eye tracking, but not in the way you might expect. Instead of using eye tracking to see where your gaze is directed, the game will instead use it to detect when your eyes are fully closed. If you can manage to play with your eyes closed, your score for that segment will be multiplied much higher to reward your mastery. That’s an awesome and unexpected way to use eye tracking and should be especially satisfying for those who can play Drum Rock’s catalogue by heart.

Drums Rock is available on Quest via App Lab, as well as PC VR via Steam. Garage51 haven’t confirmed a specific release date for the PSVR 2 version just yet, but we do know that PSVR 2 is set to launch on February 22 with a bunch of launch titles alongside the headset.

We’ve reached out to Garage51 for a more specific window for the PSVR 2 release and will update the article if we receive a response.