There are few feelings in The Lands Between more satisfying than helping your fellow Tarnished surmount Elden Ring's most difficult challenges. While still not perfect, the cooperative elements in FromSoftware's most recent title are more fleshed out than ever. Elden Ring offers plenty of opportunities for you to accompany other players through dungeons, the game's massive open-world, as well as the toughest boss fights.

But, being a good cooperator can be about more than just playing well (though that can help too). The game offers loads of options, from weapons to armor pieces, spells, and more, that you can take advantage of to give your cooperators (or even spirit summons if playing offline) an extra edge while fighting your way through the trials and tribulations of Elden Ring.

11 Rally Your Allies With The Commander's Standard 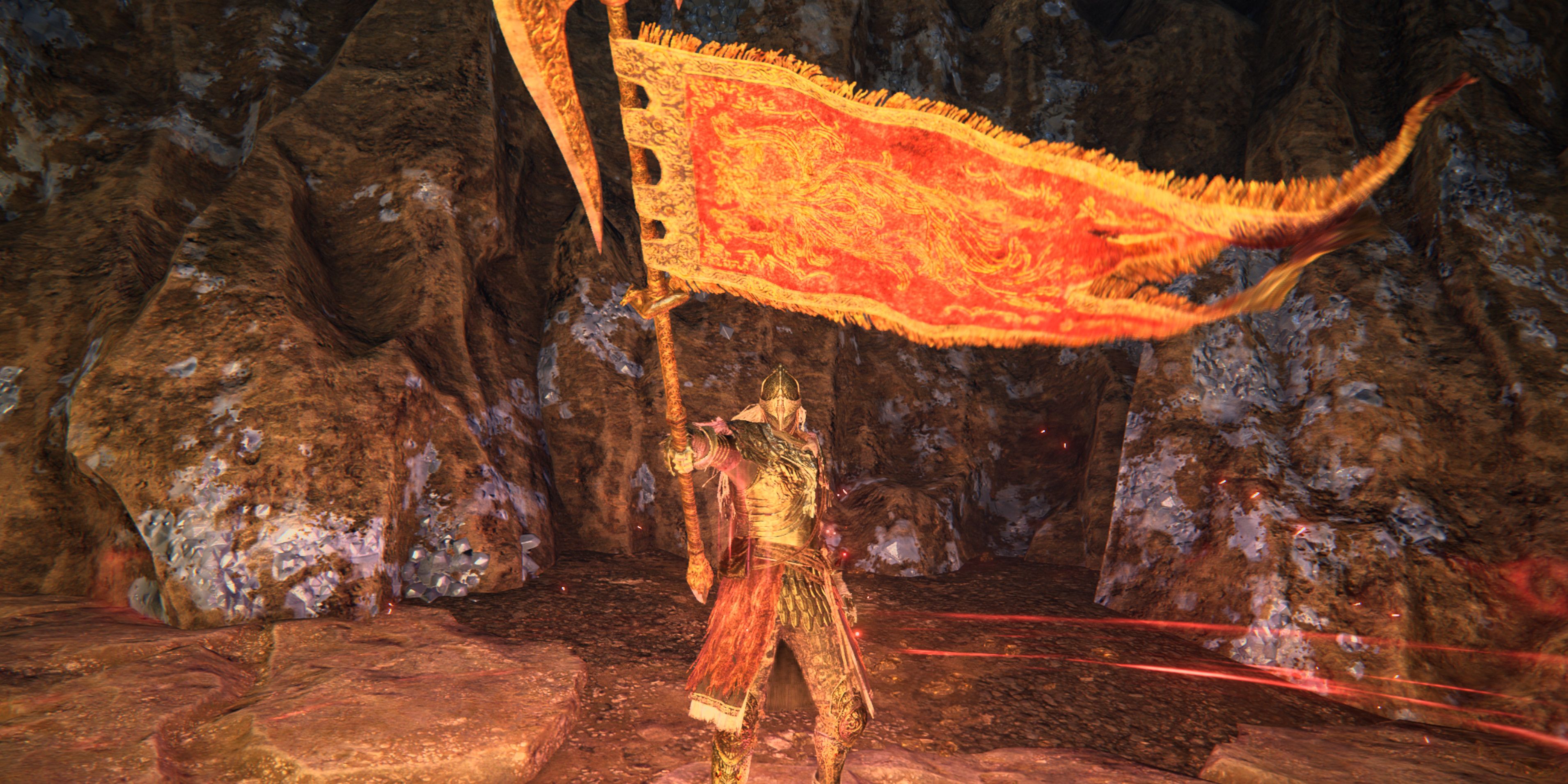 The Commander's Standard is a halberd type weapon and can be found as soon as you start the game, although you'll need to defeat a pretty tricky boss to do so. It boasts an admirable B scaling in strength and has great range, making it a solid option for strength-based builds. But, its real utility comes from its unique Ash of War, Rallying Standard.

Using this skill provides a 20 percent buff to both damage dealt and defense for you and all of your allies for 30 seconds. While the FP cost is relatively high at 30 per use, even melee-oriented characters will likely have more than enough FP to reapply the buff throughout longer fights, giving you a great offensive and defensive edge.

10 Channel The Power Of The Erdtree With Golden Vow 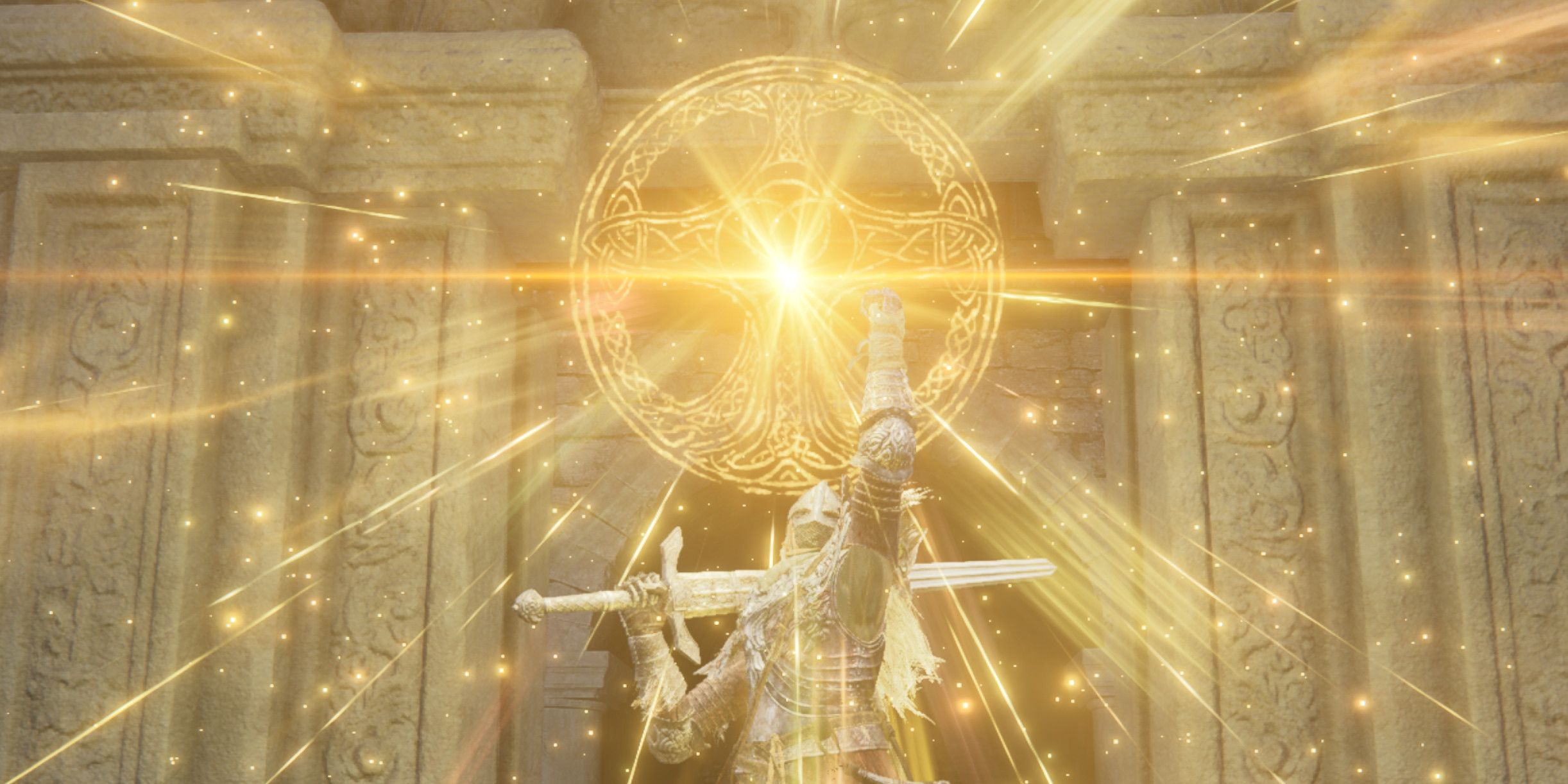 If the stat requirement for The Commander's Standard is a bit too hefty for you, or if you're going for a more Faith focused build, Golden Vow is your best bet for a party-wide buff. While it might seem weaker than Rallying Standard at first, boasting a 15 percent damage buff and a 10 percent buff to you and your allies' defense, it makes up for that with its duration of 80 seconds, more than double the length of Rallying Standard.

It's also relatively easy to obtain, just head east towards Mt. Gelmir from the Altus Plateau and you'll eventually discover a location called the Corpse Stench Shack, where it can be picked up. Keep in mind the effects of Golden Vow and Rallying Standard cannot be stacked so you'll need to choose one or the other while structuring your co-op-centric build. 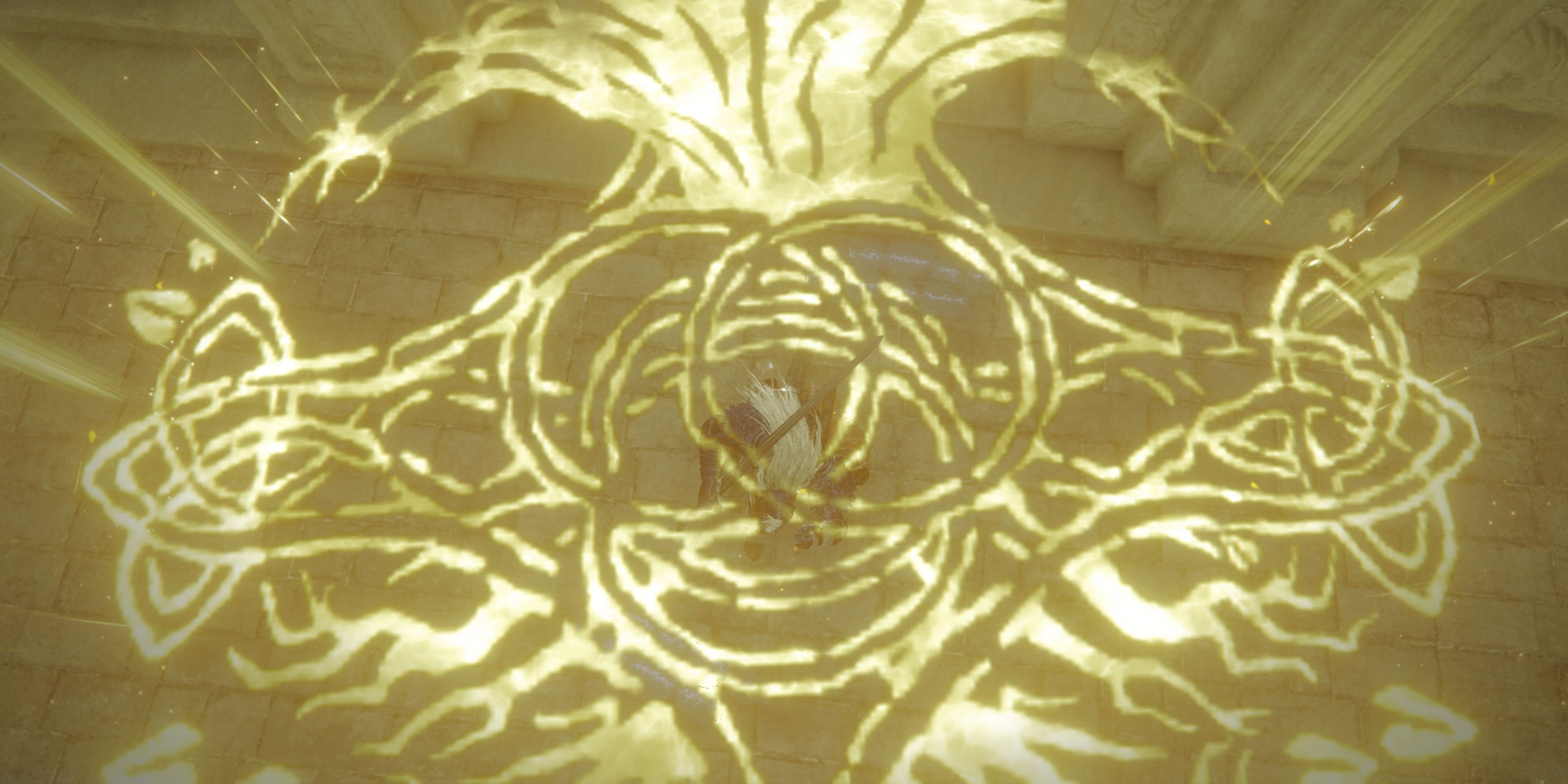 Blessing's Boon is a valuable incantation for Faith builds which provides an area of effect regen for you and your allies over the course of 90 seconds, making some of the game's longer fights more manageable and reducing the need for flask management.

It can be purchased from Pastor Miriel in Liurnia relatively early into the game, making it a great support option for new characters. Later on, you'll find an even better version of the incantation called Blessing of the Erdtree which boosts its overall healing potency by around 50 percent.

8 Use Protection Of The Erdtree To Shield Your Allies 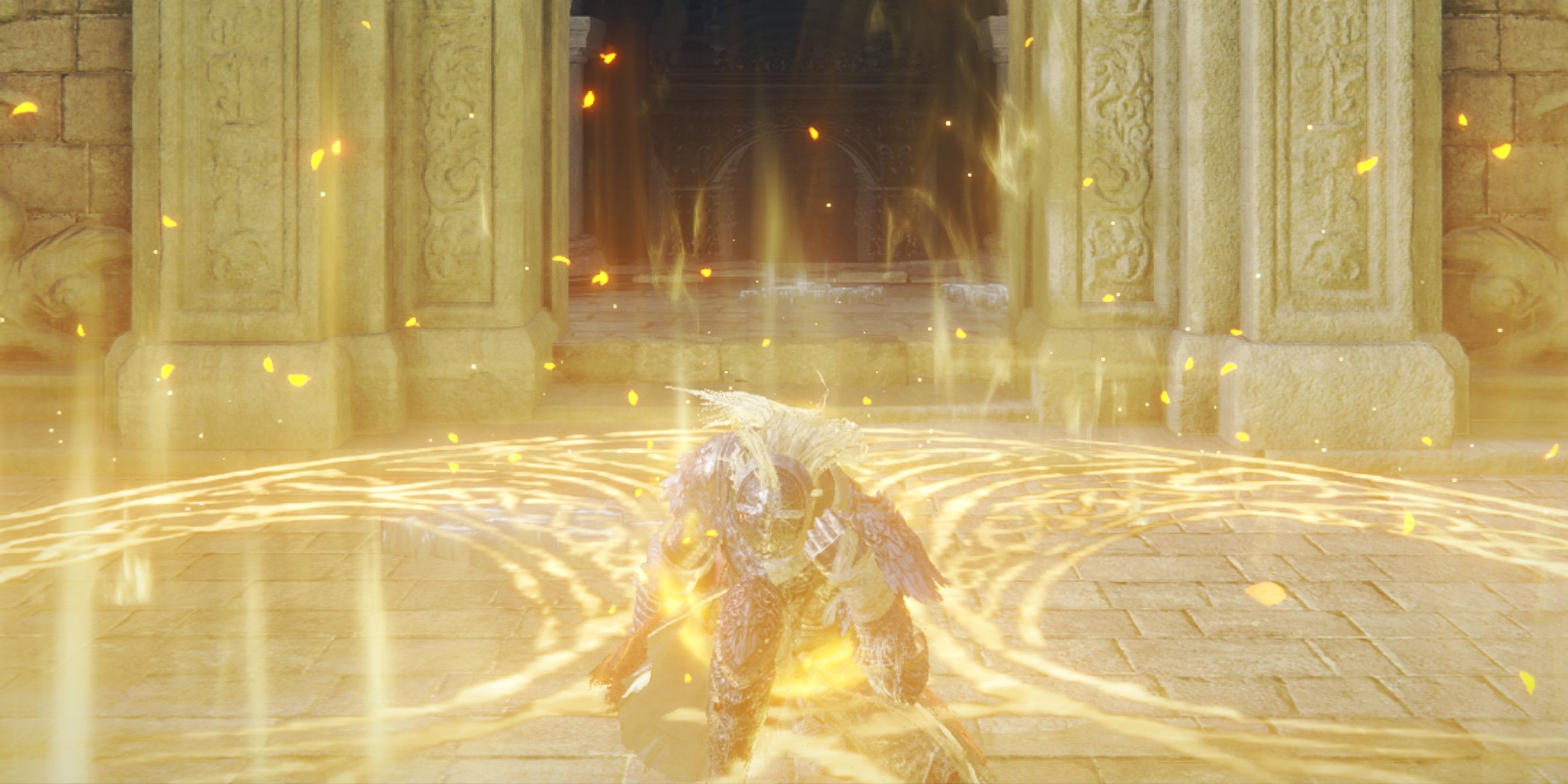 Another Faith-based incantation, Protection of the Erdtree will create a barrier around yourself and your allies which reduces incoming non-physical damage by a whopping 30 percent. Other variations on this incantation, Barrier of Gold and Golden Lightning Fortification, can be found and could prove useful if you have some unused spell slots (you can get more of these by hunting down memory stones).

The Best Faith Weapons In Elden RingHowever, by focusing on all non-physical damage rather than a specific element, Protection of the Erdtree is far more flexible than its counterparts. This handy incantation can be found relatively easily by killing a scarab just west of the Windmill Village in the Altus Plateau. 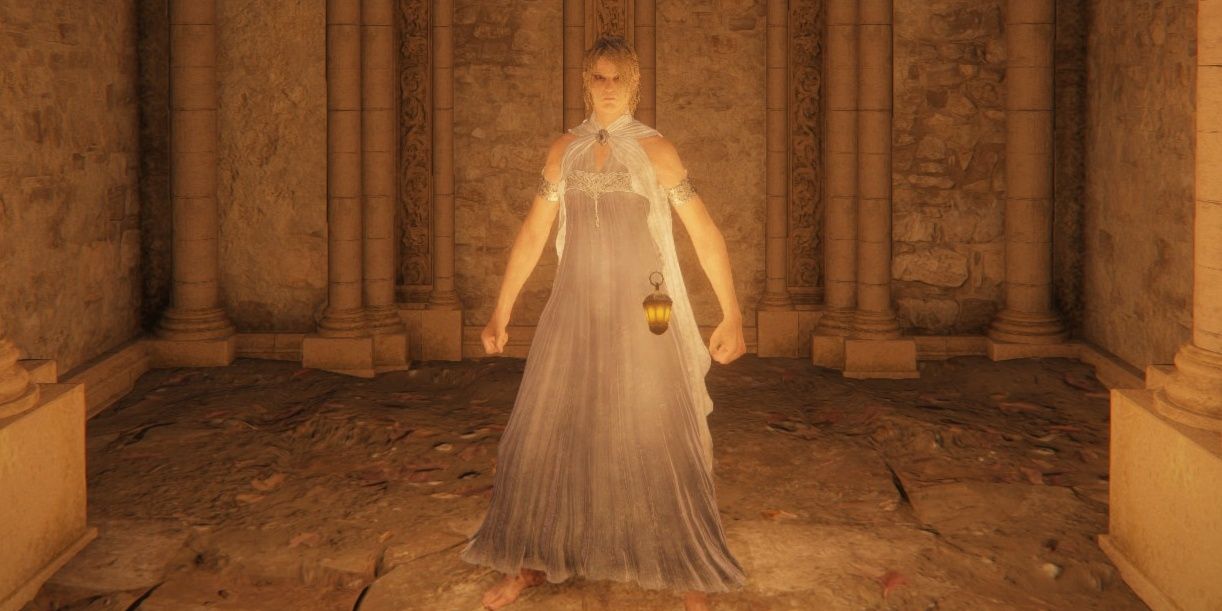 Found in Leyndell, the Royal Capital, this flowing garment provides a constant regen to your allies in an area of effect around you. While the healing power of this regen is relatively weak, it does stack with incantations like Blessing's Boon and Blessing of the Erdtree, giving a slight boost to your overall healing potency.

It can also help to alleviate the need for healing during larger stretches of open-world play as you'll be able to gain health without wasting flasks when moving from place to place. Note, however, that this regen only applies to your allies, not yourself. 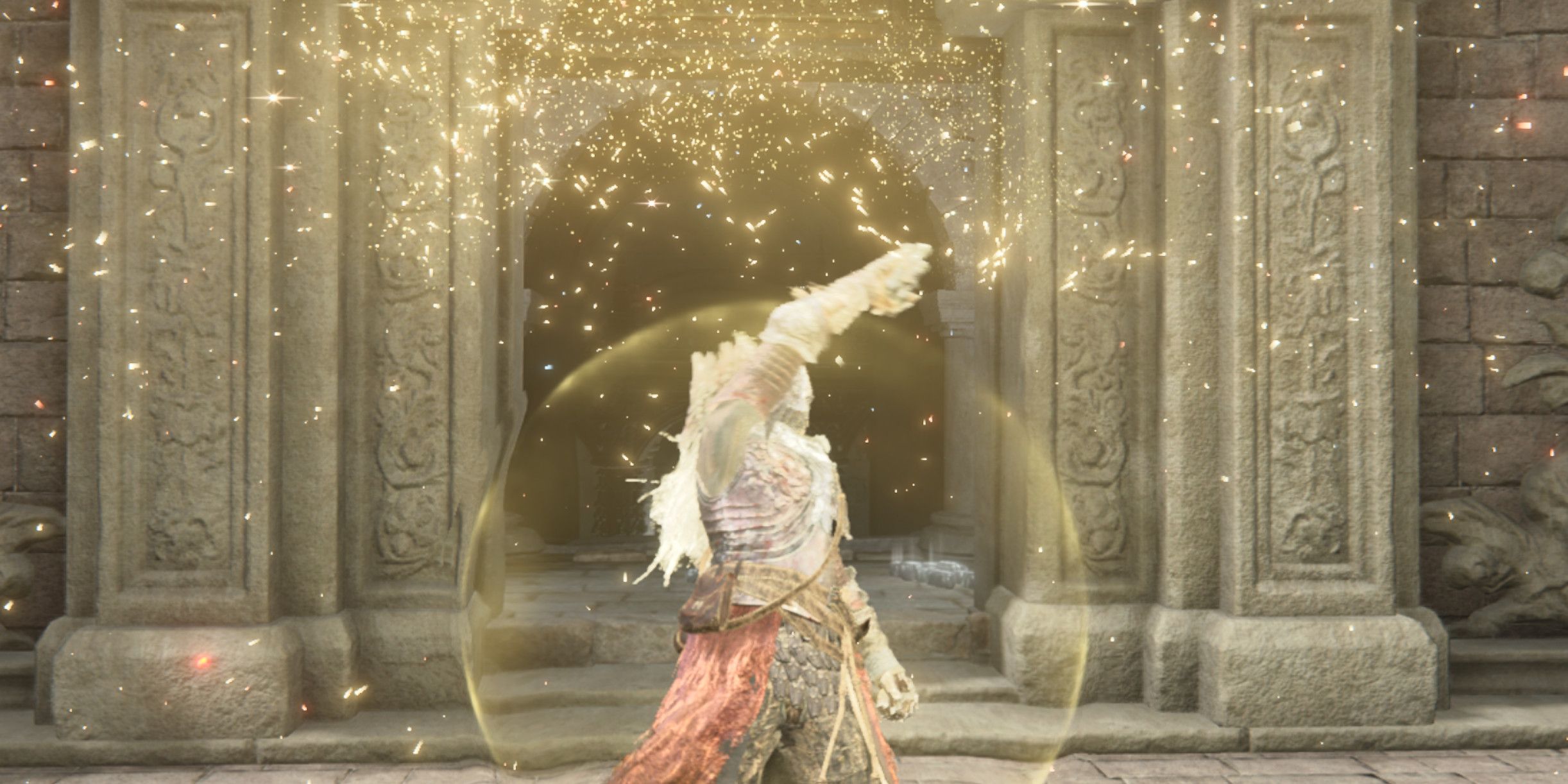 New to Elden Ring is FromSoftware's take on a crafting system, allowing you to gather valuable materials that can be used to craft a variety of consumables. One type of consumable you might come across are various perfumes, items that use FP to either deal damage, impart status effects, or provide buffs to the user.

5 Related:Helpful Items You Might Have Missed In Elden Rin

One such perfume is the Uplifting Aromatic which can be crafted after finding the Perfumers Cookbook [1] in the Perfumers Ruins early on in the Altus Plateau. In exchange for a small amount of FP, this item will grant an ally a 10 percent attack boost as well as a shield that blocks 90 percent of all damage from the next hit they take. Given its status as a craftable item, the Uplifting Aromatic is often overlooked but can be a total lifesaver during tough fights.

4 Decimate The Undead With Shared Order 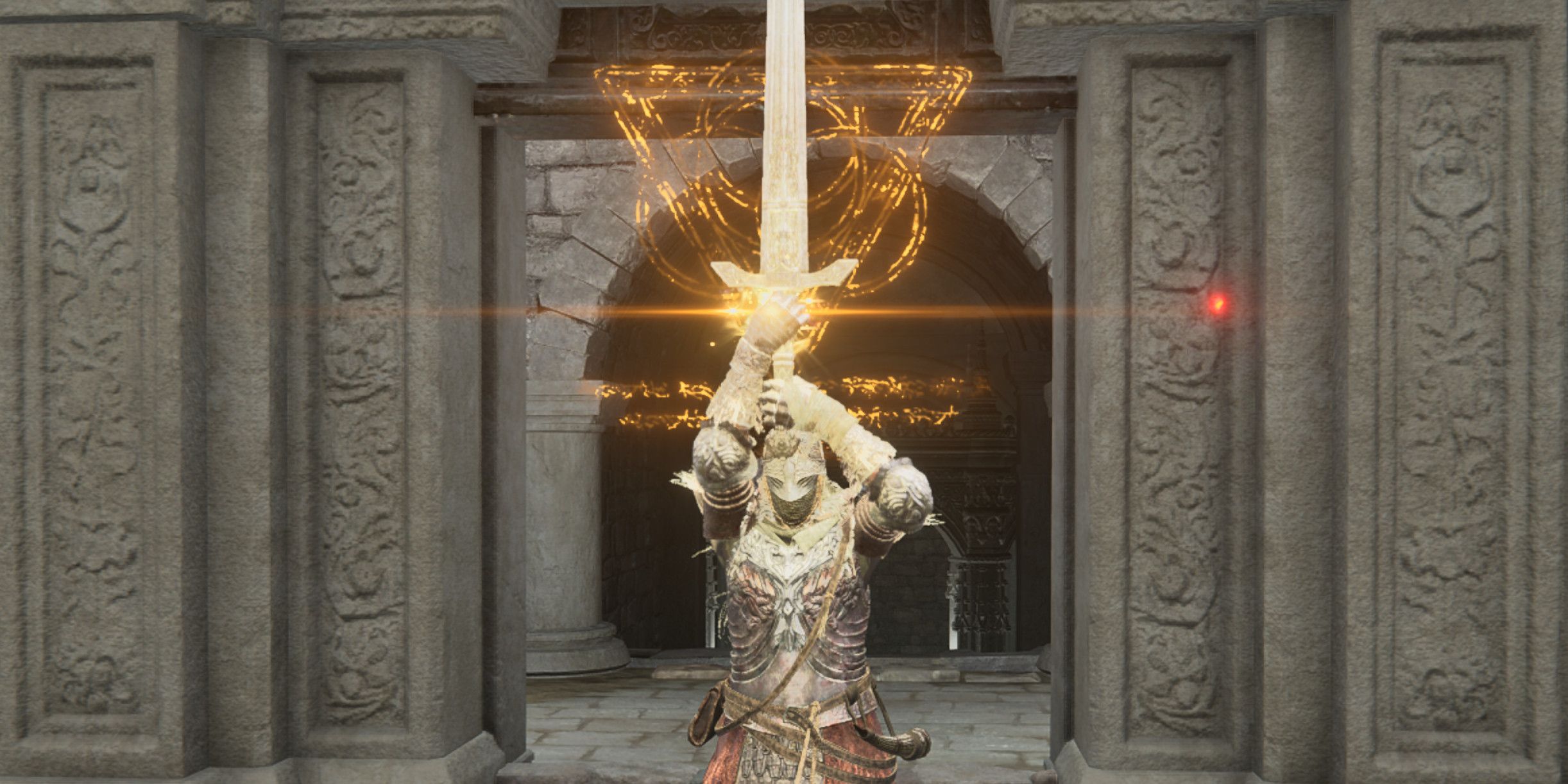 This Ash of War can be obtained after defeating the challenging Night's Calvalry boss on the Altus Plateau and can be attached to most melee armaments. Using this skill will grant a holy essence to the weapons of all nearby allies and yourself, adding a nice bit of extra damage to your attacks.

This is especially useful in graveyards or the game's catacombs where skeletons will continue to revive themselves unless their bones are destroyed after killing them. The holy effect provided by Shared Order is not only extra effective against the undead but will kill them permanently, saving you time and effort in navigating these skeleton-infested corridors.

3 Helping A Mage? Give Them Terra Magica 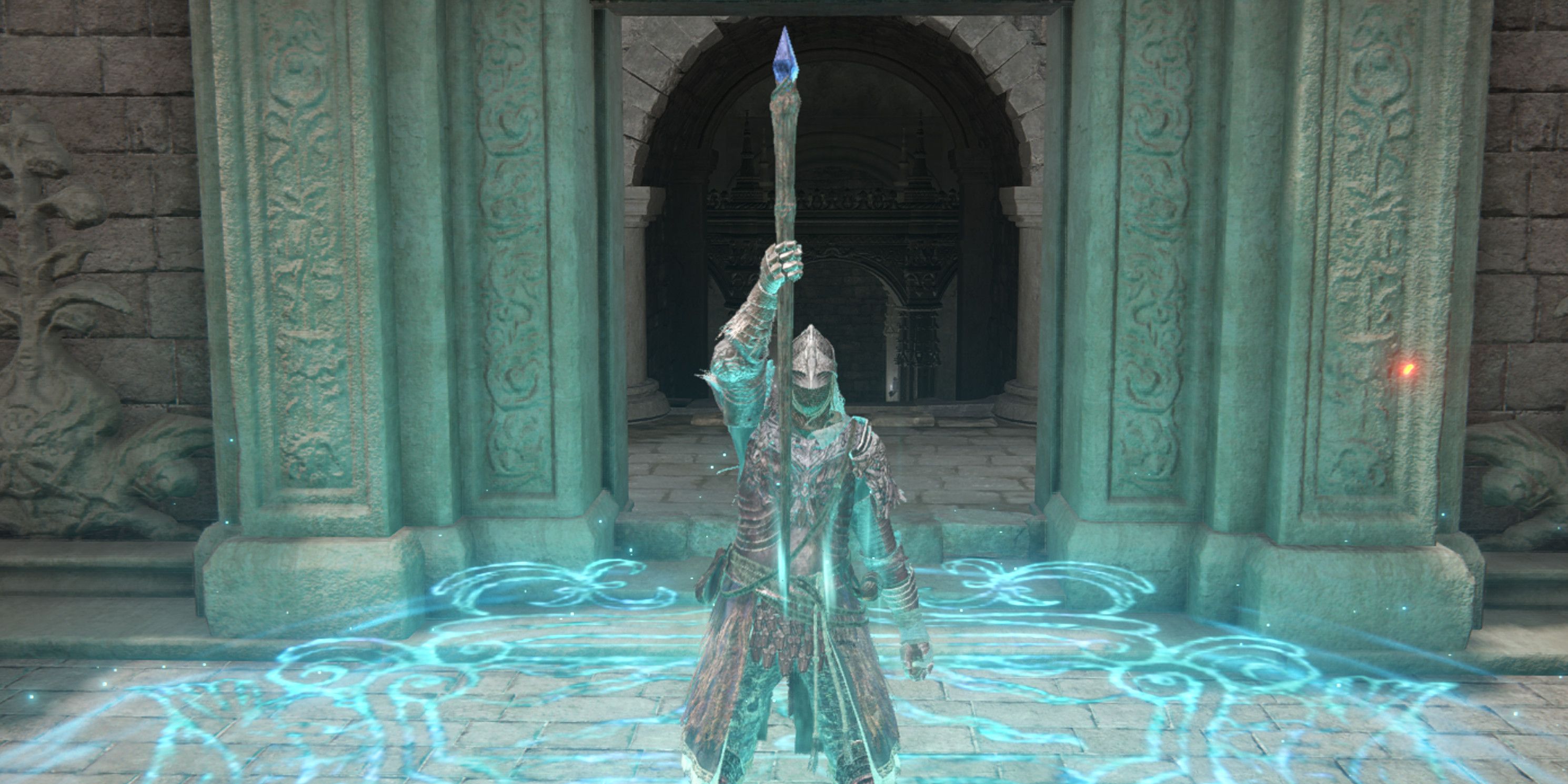 If you're running an Intelligence-based build, your strongest support option is the sorcery Terra Magica which can be obtained in a cave beneath The Academy of Raya Lucaria. By casting this sorcery you'll place a large sigil on the ground which increases the magic potency of anyone standing within it by a massive 35 percent.

While far more situational than some of the other buffs in the game, it can be deadly in the hands of a team of talented mages who will be able to fell the game's toughest bosses in a matter of seconds with the right spell combinations.

2 Scare Your Enemies Into Submission With Greyoll's Roar 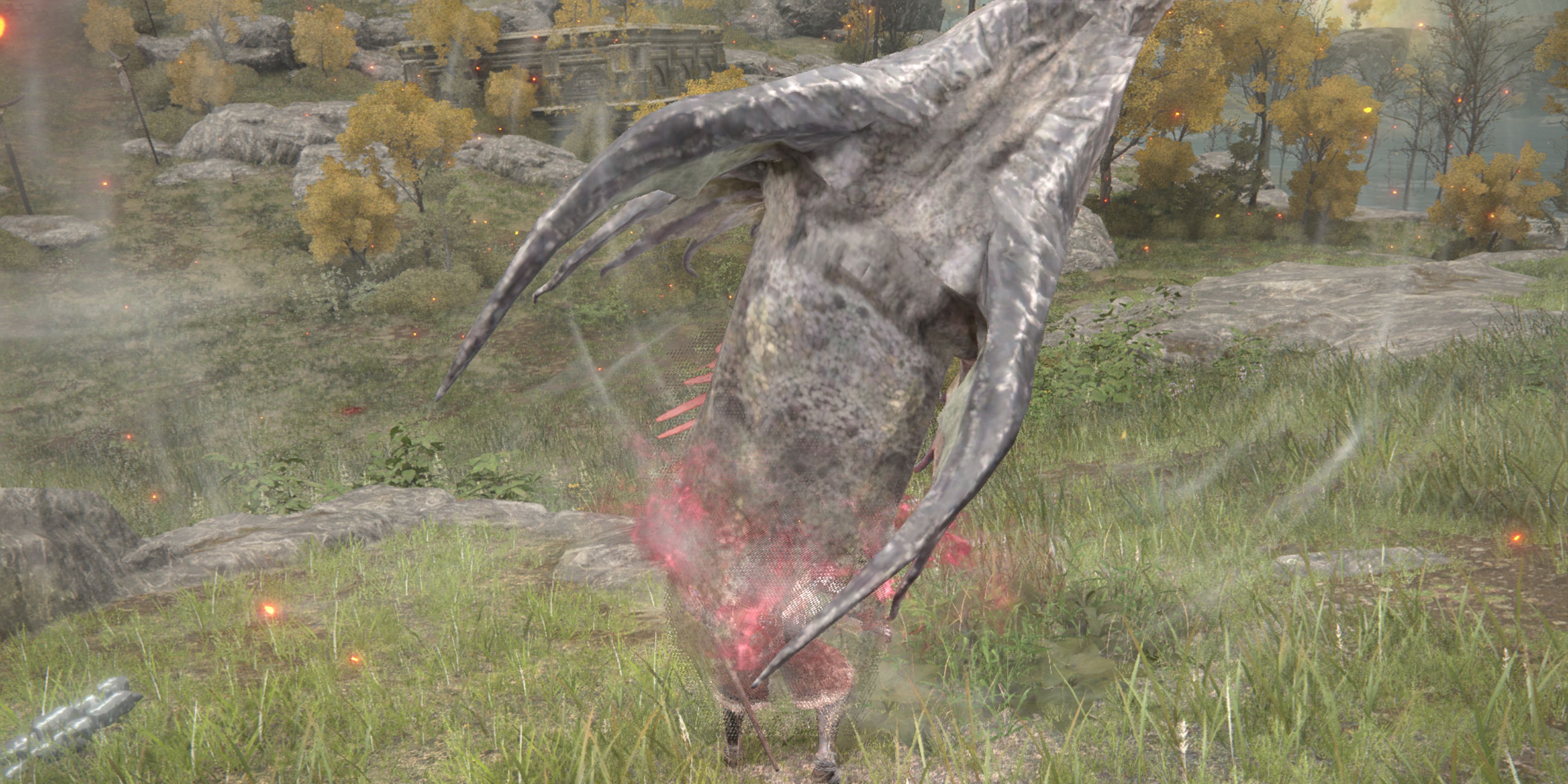 One of several powerful Dragon Communion Incantations, Greyoll's Roar is a massive area of effect attack that reduces enemy damage by 20 percent and increases their damage taken by 10 percent. Since this is a debuff on your opponents rather than a buff for your party, it stacks nicely with any other buffs you might be using, making it a valuable tool for any fight where you're able to cast it.

It's also very easy to obtain, by killing the giant sleeping dragon in Caelid at any point in the game (you'll just need some patience to make that happen).

1 Old Lord's Talisman: Stretch Your Buffs To Their Limit 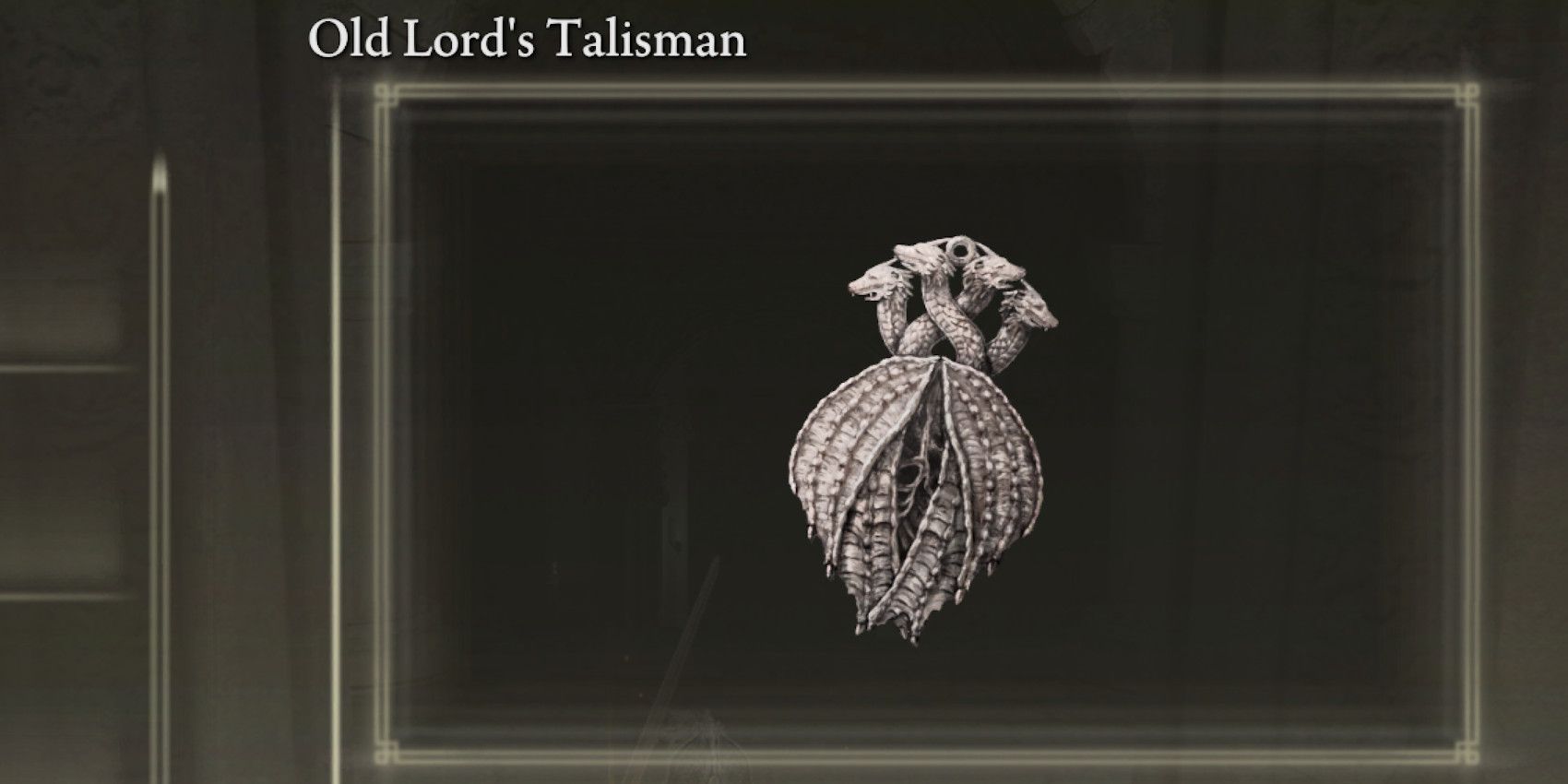 This will likely be a late-game addition to your build, but an important one. The Old Lord's Talisman will give a flat 30% increase to the duration of all of your buffs. This means you won't need to reapply your buffs mid-combat as frequently, saving you valuable FP as well as keeping you out of danger since many buffs leave you open to damage with their lengthy cast times.

This also makes you a far more effective healer as your regenerative abilities gain this boost as well, effectively increasing your passive healing output by 30 percent. If your build centers around buffing your party, this talisman is a must-have for endgame content.