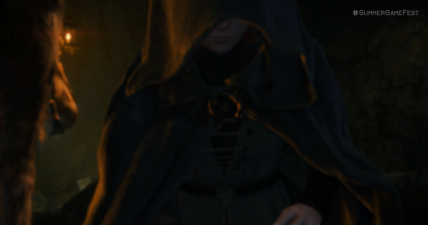 Elden Ring was first announced at E3 two years ago, and the wait for gameplay footage is finally over. Since E3 2019, every new gaming event, expo, or showcase has brought new expectation and hype from the Elden Ring fanbase, only for those hopes to be dashed. Today, their prayers were answered.

The gameplay footage showed off lots of combat and magic, with sword fights, clashes with dragons, and one character being impaled on a long blade. The trailer also confirmed the game’s release date of January 21, 2o22.

The game takes the tone and gameplay mechanics of the Dark Souls series – Hidetaka Miyazaki himself is working on the game – but in a much more open environment. That means players will be able to explore the different locations around the game either on foot or on horseback, with far more space to roam and wander through the dark and gothic world. We saw temples, libraries, castle keeps, meadows, graveyards, and churches.

The game is a collaboration between Miyazaki, and fantasy novelist George R. R. Martin, best known for Game of Thrones. It was initially announced for PC, Ps4, and Xbox One, but with the recent footage came the announcement that the game will also be available on PS5 and Xbox Series X/S.

Development for the game began in 2017, but since its 2019 there have been several false rumours of an upcoming trailer or gameplay footage, along with several leaks purporting to be of said upcoming trailer. Elden Ring was even teased by Ryan Reynolds in an earlier appearance at Summer Game Fest. Now that an official trailer is out, perhaps appetites of the Elden Ring fans have been satiated, if only for a little while.