There are over 100 bosses in Elden Ring. Most of them are optional, but the enjoyment players get out of Soulslike game is besting these various difficult enemies. Many bosses found within dungeons end up recycled and overdone by mid-game. Evergaols are where you want to start looking for unique and tough fights.

Seeking out Evergaols is one way to challenge yourself in Elden ring and gain some pretty useful and highly-sought after loot. Alecto, Black Knife Ringleader resides within the Ringleader's Evergaol in Liurnia Of The Lakes. Their move sets are identical to other black knife enemies you may have faced. 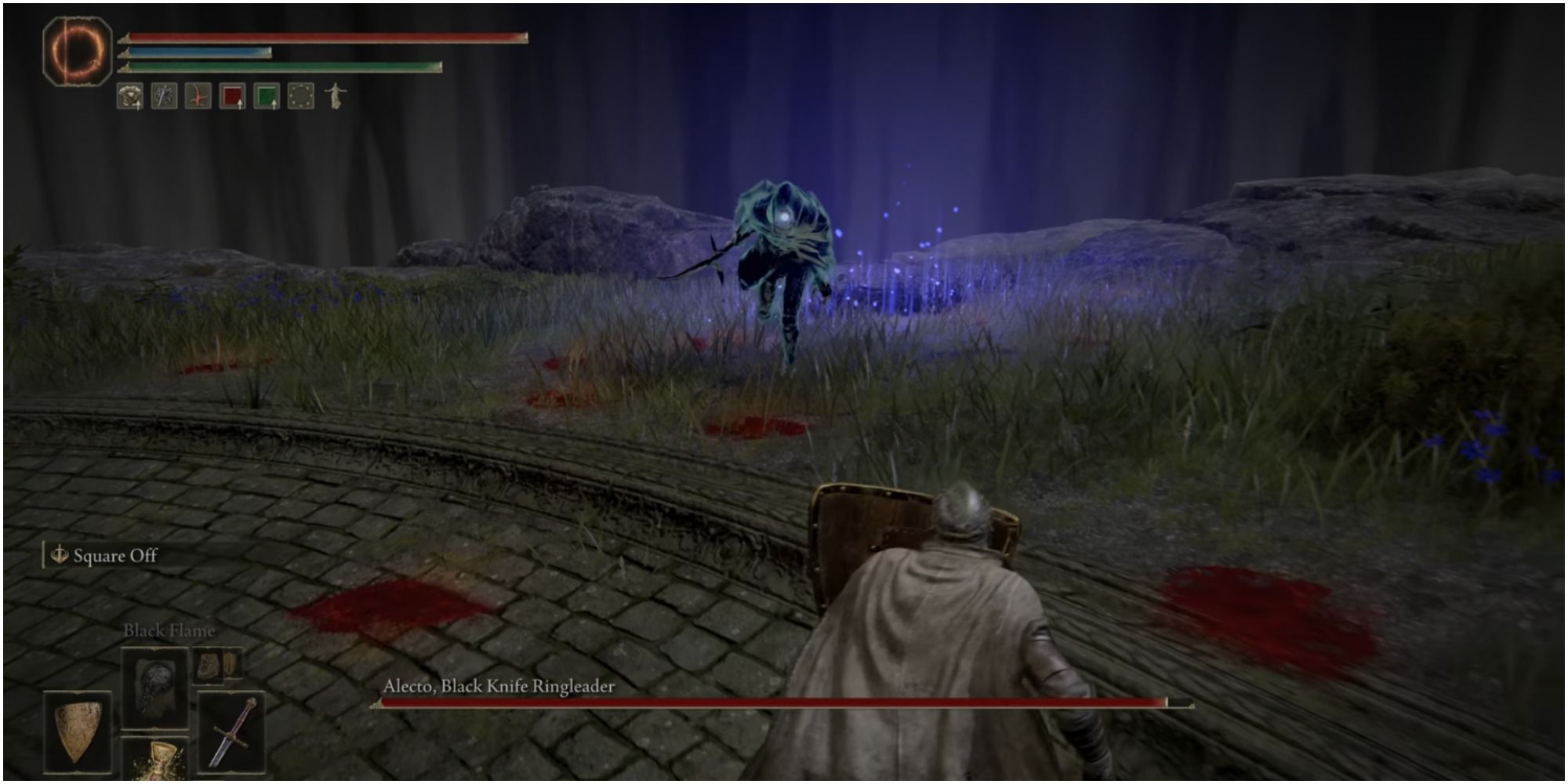 The Ringleader's Evergaol is North-West of the Moonlight Altar Site of Grace. It is past an area full of sleeping dragons. The Moonlight Altar overlaps with the mountain the Village of Albinaurics is on in South-West Liurnia. The only way to reach this part of the map in Elden Ring is by progressing in Ranni The Witch's questline. Upon defeating Astel for her, you will be able to access the Deep Ainsel River Well which takes you to the Moonlight Altar.

Alecto drops the Spirit Ashes for Black Knight Tiche. This is a legendary Spirit Ash that has Black Knife movesets and will either obliterate or confuse tough enemies you need an extra hand with. 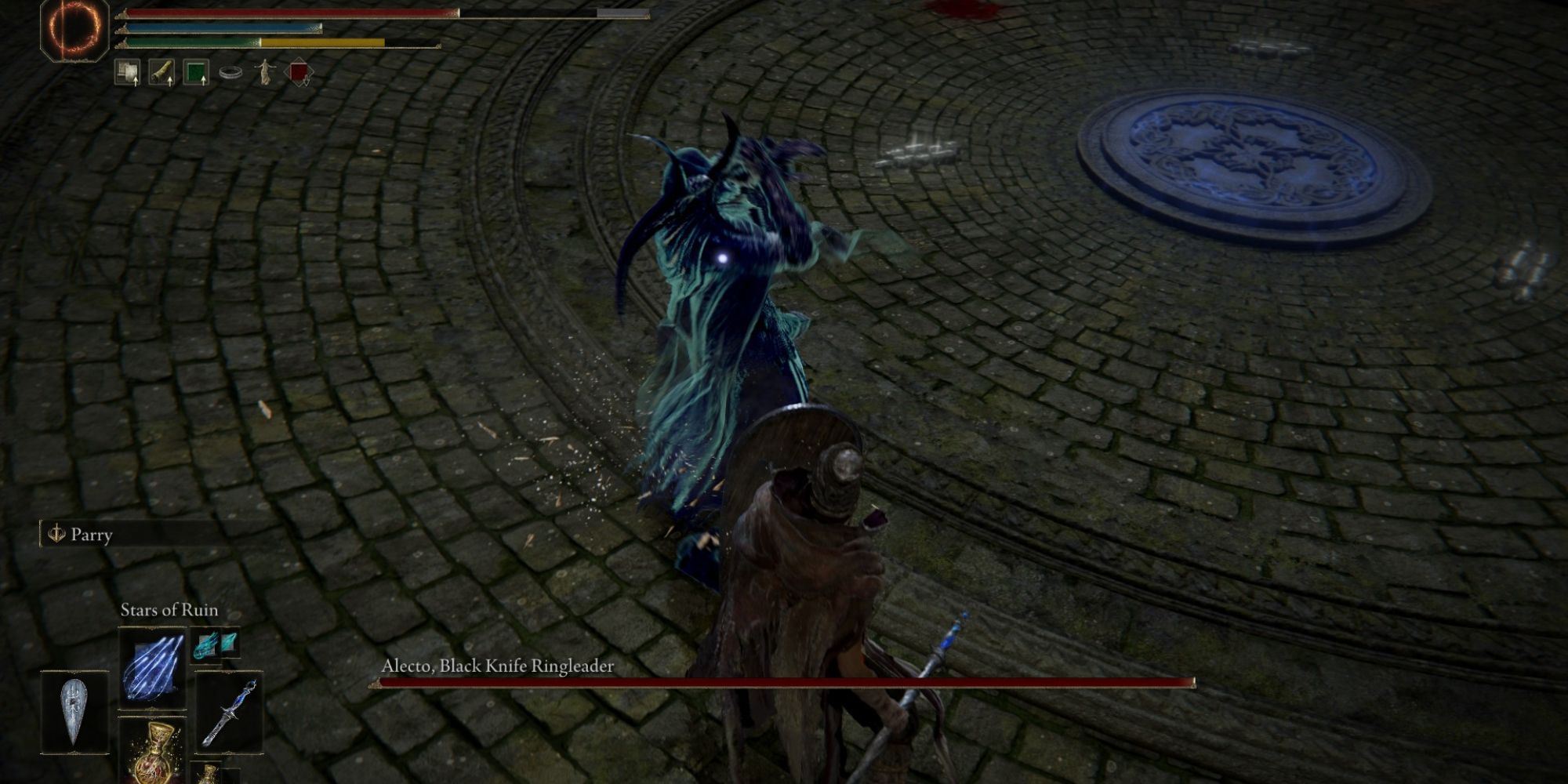 Alecto's regular move set involves slashing her dagger toward you multiple times, consistently, in quick succession. This is overwhelming. If you take one hit you'll find yourself losing the fight quickly, getting staggered, and unable to keep up with the fast attacks. Once she's done, she will quickly retreat and make space, allowing you to breathe.

Counter: You'll quickly be able to identify her quickly stabbing you. For these attacks, you're better off holding up a shield or using something like Bloodhound Step Ash of War. Dodging and rolling isn't that helpful because of how quick she's attacking at such a close range. 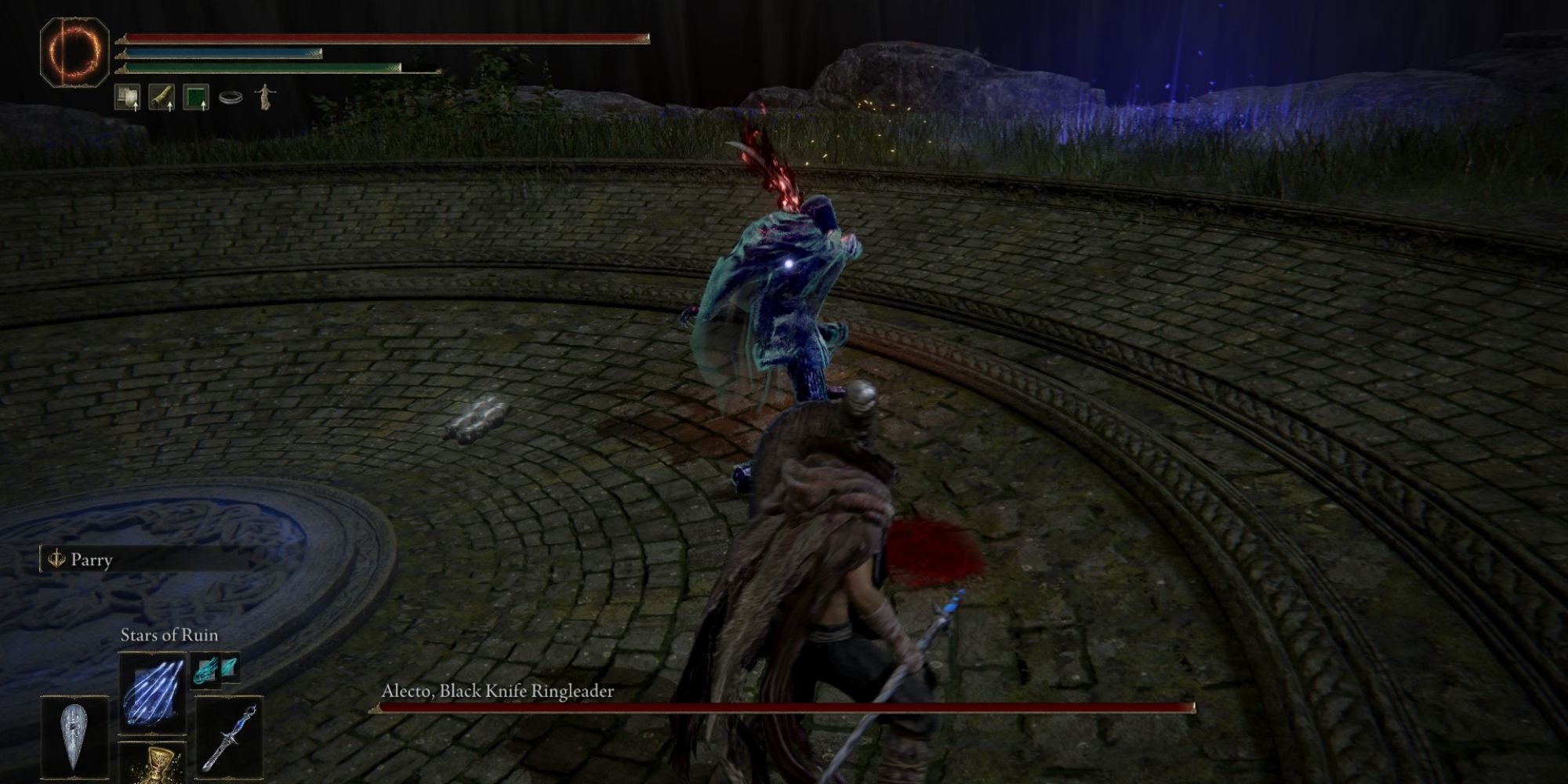 Once you see Alecto's sword glow, you'll want to dodge. This attack releases a flaming blade projectile that shoots out right. Alecto has multiple red flame attacks that will make you lose the fight in seconds if you get it by them.

Counter: For this attack, dodge roll left or right. It will be easier to dodge past than the close-ranged stabs. 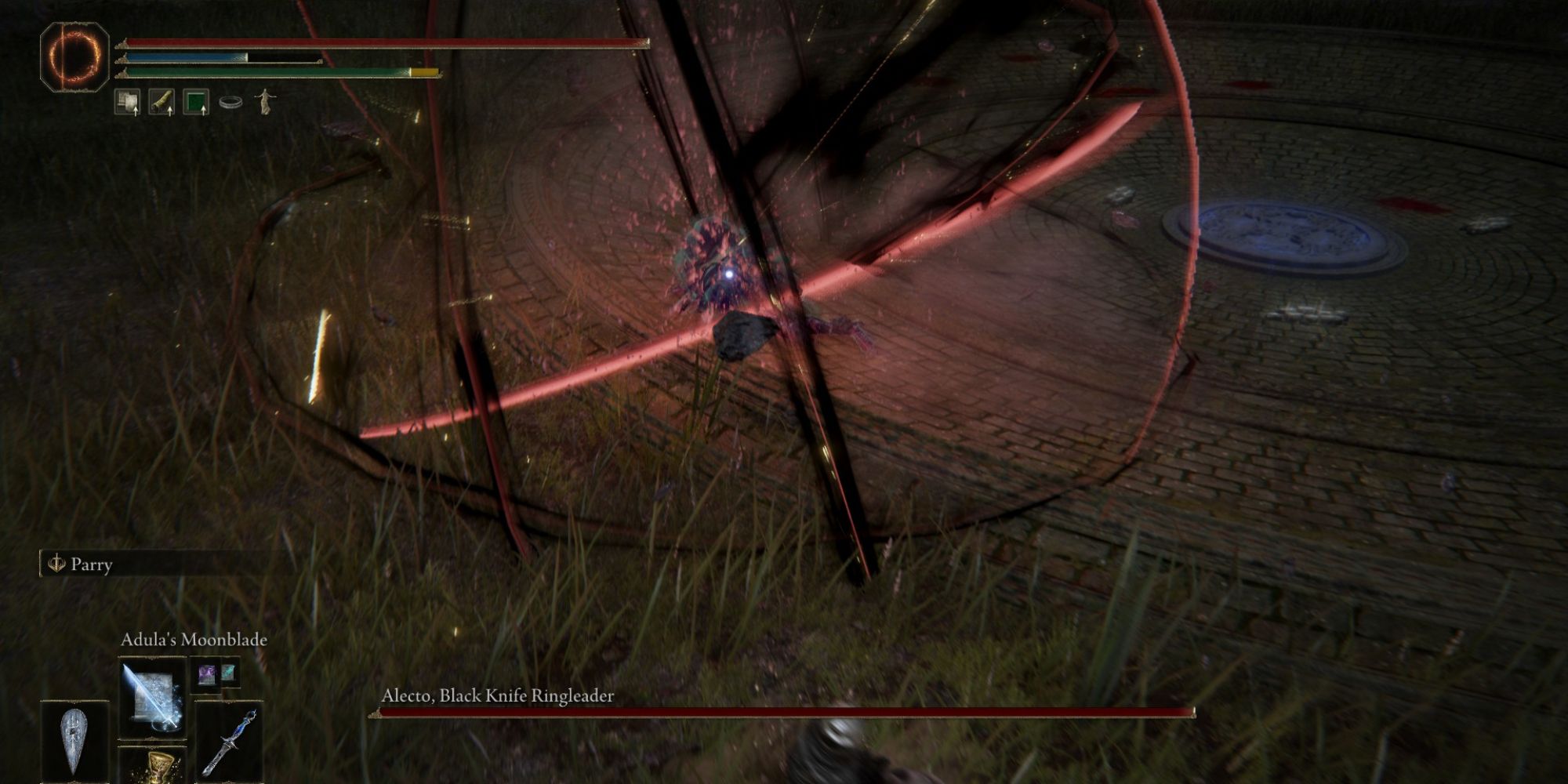 This is the most deadly move Alecto has. It will instantly kill you if you get caught in the AOE. With over 45+ Vigor upgraded you may very well survive this, but with little health. If you survive it, you'll end up chugging health potions and playing defense before being able to give back any damage. Once out of the AOE, your health starts ticking away for a while. You'll notice her attempt this attack when she leaps up into the air.

Counter: It is difficult to roll out of this attack. Try not to dodge side to side, but rather backward. It's best to sprint far away before she lands, instead of waiting for a moment to dodge because you will get the AOE damage that way. 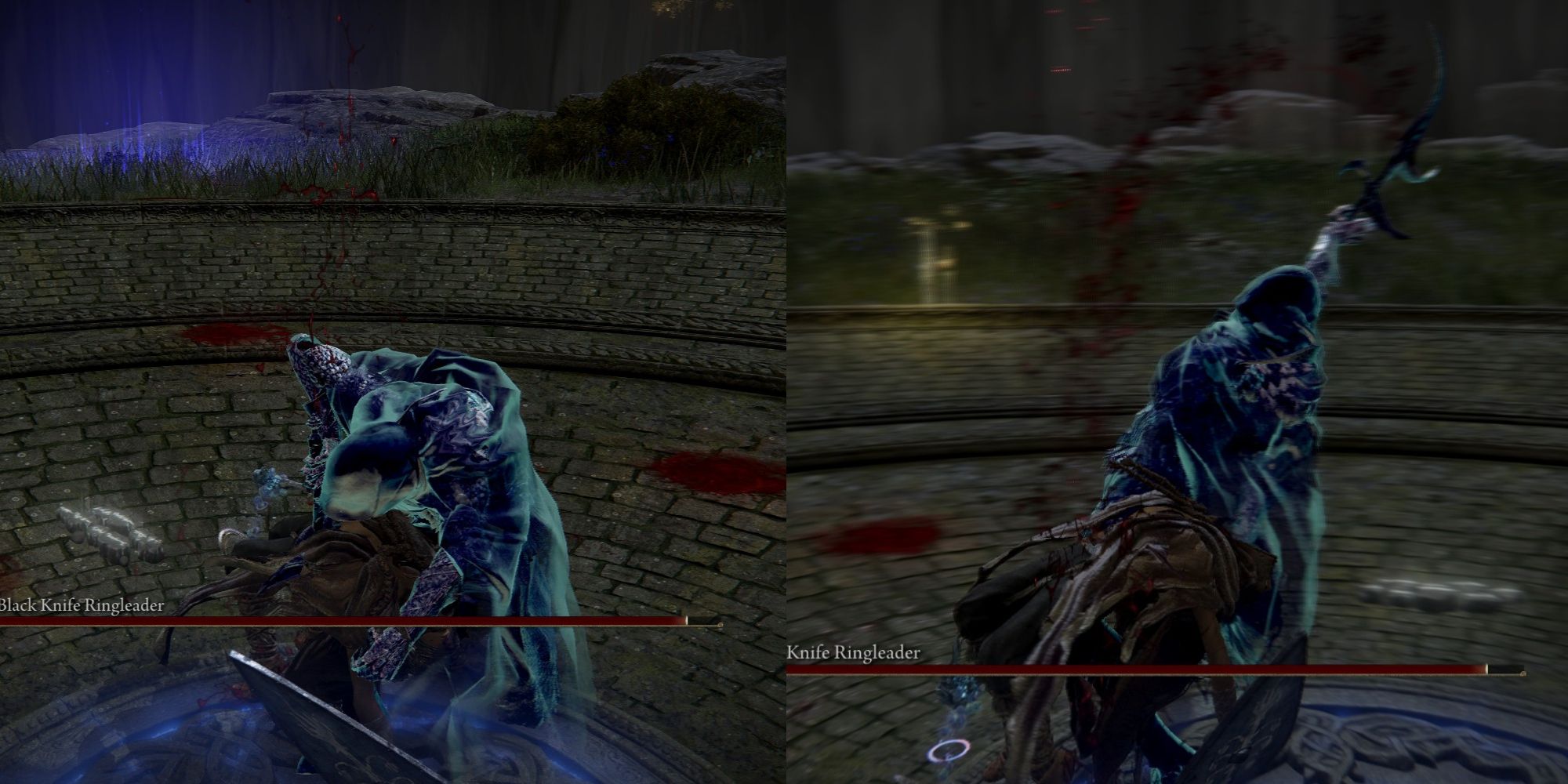 While Helmsplitter is devastating, there is another move that will finish the fight early if you let it. She can grab you by raising her hand and lunging forward. For this, you'll be stuck in an animation where Alecto removes most of your health.

Counter: You can't escape once she grabs you into an animation. To avoid this, make sure to keep a shield up if you have it and pay attention to when she's attempting to close in distance. This isn't a move that often happens, so you may not even see it. 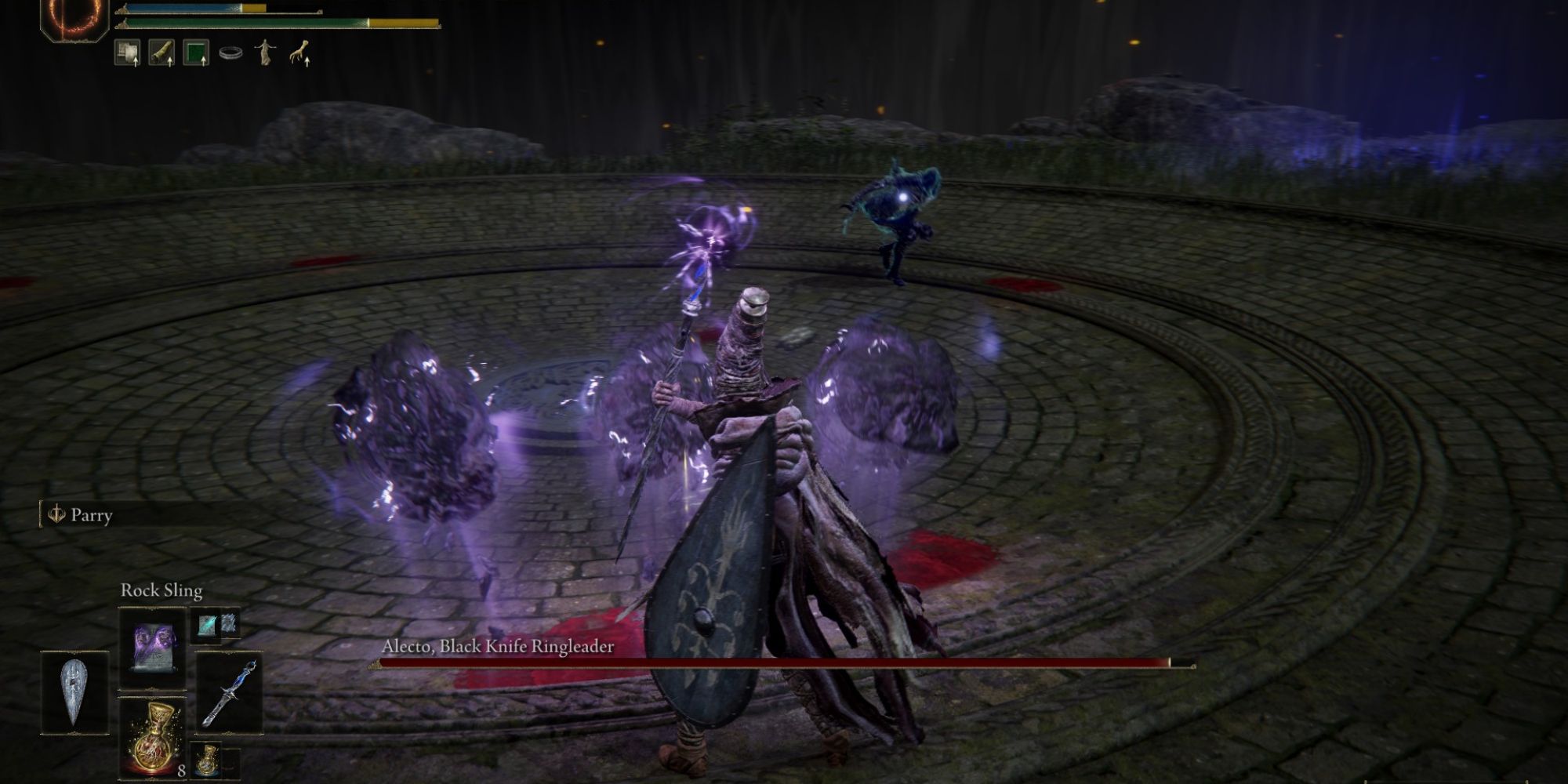 Playing as a mage against Black Knife enemies is the most challenging thing one can do. No slow-casting spells can be used. Equip only fast-casting spells like Carian Slicer or Glintstone Stars. Always have an Intelligence melee weapon on hand so that you're not solely relying on FP and for your spells to land. In this fight, you will struggle to land any spells at all. With an Intelligence-based melee weapon, you can enchant with Frozen Armament since Alecto is weak to Frost damage.

Because Alecto moves very quickly and seldom allows space, you will have to resort to spells that hone in on the target like the Glintstone Phalanx or Star Shower. Even these spells will have a hard time catching up to her. Your free moment will most likely be when she retreats backward after her multiple dagger attacks. No matter if you use magic or not, it's always good to have a shield ready that you're able to carry with your stats. Her quick dagger attacks leave little room for dodging, and a durable shield will allow you to hold your breath and focus.

As always, with any fight, using Status Effects will lessen the blow. Alecto is particularly weak to Frost damage. Hoarfrost Stomp is a highly used Ash of War that can do you wonders as it staggers well and Alecto has low poise. Bleeding her will also help, as her health will tick away while you play defense and make sure you aren't dying. Regardless, you'll have no time for heavy and long swings.

Like mages, you will need to attack fast. She won't give you time to aim and swing with a heavy weapon. If you're using a heavy weapon, you better make sure that your stats for it are leveled up enough that one swing does massive damage, and you can play defense until another opening arises. With a shield, you'll be able to play defense, roll behind her and attempt backstabs that can get you the damage you need.