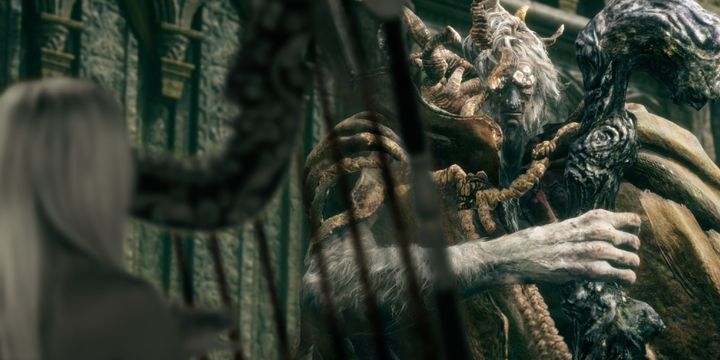 Elden Ring launched earlier this year and as almost everything else that was supposed to launch in 2022 gets pushed into 2023, it feels like a shoo-in for Game of the Year. Four months on from its arrival, players still aren't done with the game. Far from it, in fact. Its large and dedicated player base continues to do all sorts of weird and wonderful things with it, including beating its bosses with a harp.

No, not a harp bow in the game. An actual harp outside of it that Elden Ring player Anna Ellsworth turned into a working controller. As reported by GamesRadar, Ellsworth connected the harp to their PC and ran it through two programs in order to turn it into a controller. The first detects the pitches and the second turns those sounds into keystrokes.

Ellsworth hasn't merely used their harp controller for a leisurely jaunt around a quiet part of The Lands Between. As you can see in the clip below, they've already become so astute at using their harp controller that they've used it to defeat Margit. One of Elden Ring's toughest bosses, and one that had only been beaten by a little more than half of the game's PC players a few weeks after it launched.

The harpist needs to pluck different strings to move in different directions, and there weren't enough strings at their disposal to enable all of Elden Ring's commands. There's no string to pluck for a heavy attack, for instance. Ellsworth also can't dodge and move in a particular direction at the same time. That means they can only dodge in the way their character is facing and have to hope Margit's attack doesn't happen to fall the same way.

An impressive feat, but this isn't the first time someone has used something downright bizarre as a controller in order to make Elden Ring a little more challenging. Someone taped a bunch of bananas together and turned them into a controller they used to beat the game's first boss within a month of the game's launch. The modding community has also been having a lot of fun, adding Darth Vader and so much more to Elden Ring.